Graffoto are pretty sure that this is the first actual stencil piece in London by German artist Evol and it's great to see one in the flesh finally. 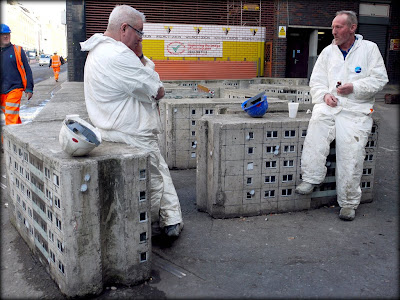 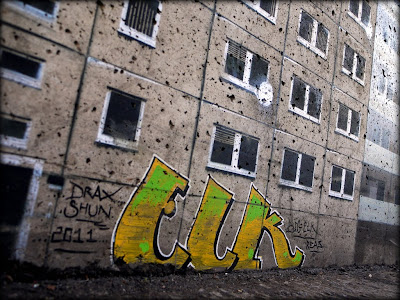 He actually uses both stencils and also paste ups (in this case just stencils with a spot of hand finishing for the perverts amongst you) to produce these mini "estates" and some of the details, even close up look so amazingly real and almost perfect in their own miniature perspective, pissed off Polish labourers sat atop to cap them off. 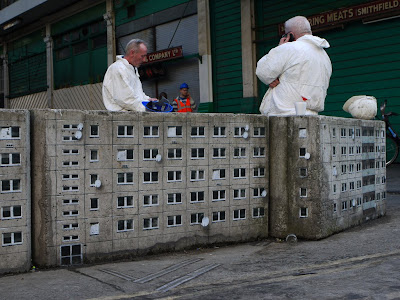 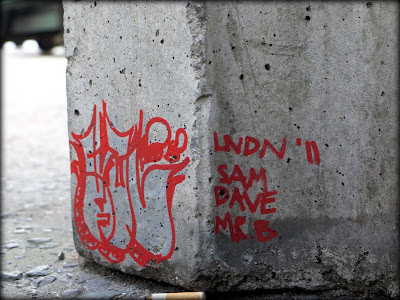 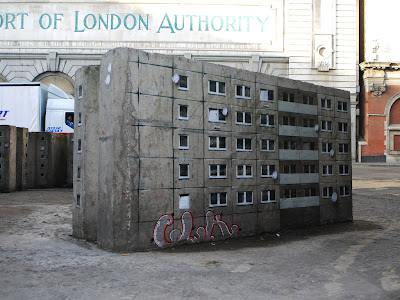 Howaboutno
These photos don't do the piece justice and we advise seeing it with your own peepers, so get there and take a look if you can.

Or, if that is impractical, check out more pics here.

Posted by HowAboutNo at Friday, November 18, 2011 No comments:


Greece is a battered country; battered by economic penury, politicians that can’t be trusted, lack of a properly functioning tax collection mechanism, corruption, cronyism, nepotism and that’s just for starters. If there is one thing the Greeks haven't wasted money on it’s The Buff. Every highway fence, roadside kiosk, every shop front, underpass and park wall is - like the economy - battered. Most of my Greek graff spotting is done from taxis, it’s not often I get the chance to fit in a little bit of street culture. I spotted the decoration on the facade of this derelict apartment block (below) when heading towards Syngrou Avenue, the driver pulled what he called an “Original Greek” manoeuvre to zip back against the 3 lane flow. The piece exhorts us to “be water again” and is tagged Feo Flip. Flip is the artist behind the aquatic beast in the top photo, spot a theme? 
When it comes to politics, the Athenian writer delivers his message a bit rougher and more direct. Capitalism is crap says the first embittered red drop-shadowed piece below whilst a simple marker suffices to get the more direct message across in the second pic below. A year ago I took an overground underground and passing through the Gazi area I spotted some low rise industrial units parallel to the track with some impressive murals, some relic of an old graffiti jam or possibly a part of Athen’s Prosopsi facade programme, a council supported project to brighten some of the crappier walls though I suspect they pre-date that. Stealing a daylight hour a few weeks ago I headed up to Gazi. I knew I was getting close when I found this pair of portraits by old favourites JNOR NDA and SidRon. 
Then the building I had seen from the train came into view with some nice mural work still mainly intact.


Technopolis and Cityscapes above are by INO1, perusing his website I see an outdoor piece called “Tit Job”, I shall search ceaselessly until I can report back to you with a photo.

[update: looking back at my last Athens blog post here I see I took a photo from the train of this very spot and I promised myself that I would find my way back some time in the future]

Other artists below are currently unknown to me. Wandering around the other side of the building, the main highway side revealed a stunning surprise, sandwiched between a Nunca pair of portraits and a piece by Greek artist Same84 is a spectacular and virtually intact Os Gemeos mural. 
Jaw dropping shock would not over-state my gut reaction to finding this. An inscription attributes the mural to Nina, Nunca, Os Geneos and Same and dates it to 2005. The event was evidently a legal jam and Athens crew Carpe Diem who specialise in these projects are up on the credits. In a city where the crappy tag is so omnipresent, it is simply astonishing that this piece should last in such great condition for so long – six years!!! The state of the buildings opposite give you an appreciation of the respect this mural has been given. 
A bit of Hellenic graff spotting wouldn’t be complete without discovering a gorgeous mural by Zap aka Alexandros Vasmoulakis, tick the box baby. 
Finally, last week on another more recent trip, down Syngrou Avenue virtually opposite my usual hotel I found this Same84 mural which I suspect is very recent. Nice to keep finding the fresh stuff.