subtitle -"Hurrah, its not about Banksy or Robbo"


Pinpointing the beginning of the credit crunch depends for most of us on personal factors such whether you read your paper from the back to the front or the moment of hard impact such as loss of the McJob. Ronzo reacted to the credit crunch in about March last year with a massive economy devouring sculpture at the edge of the City. 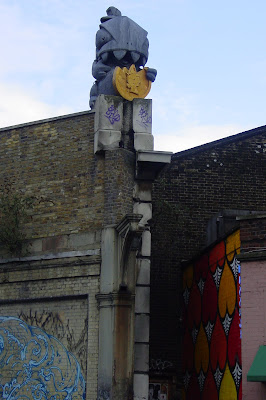 He now responds to the announcement last week that the recession is officially over by launching a small army of Crunchy, his Credit Crunch monsters around the ancient portals to the City of London. 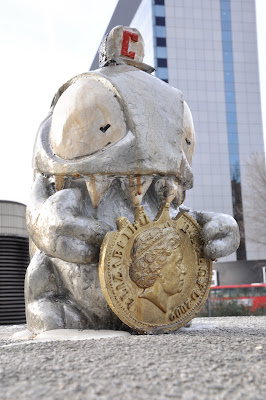 People not familiar with London may need to know that the City of London is a comparatively small square mile of suited financial chicanery at the centre of the metropolis of London and indeed, the whole developed World. The City of London is actually the original area where London was founded and before Styrofoam coffee cups and Flaming Lambourgini’s were discovered, the City of London was a walled city with 7 gated access points, commemorated still by areas bearing their names such as Aldegate, Ludgate, Moorgate and so on. The main roads into the City at those points are now protected by a fenn of dragon statues (not Griffins, Graffoto regrets to inform those who cherish that myth). 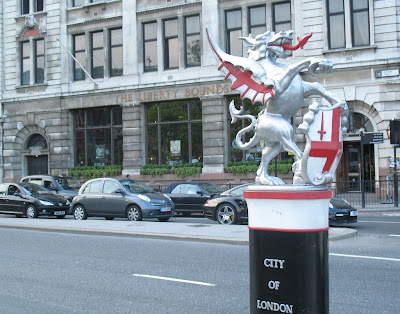 
Graffoto located a few of the Ronzo credit crunch monster sentinels this afternoon. Apart from one example that we know of, Crunchy sits on a 3 foot high pedestal bearing close resemblance to the permanent Corporation of London dragons installed mainly in the 1960s. The “Pity Of London” slogan is a mocking mash-up of the “City Of London” wording of the conventional dragon plinths. 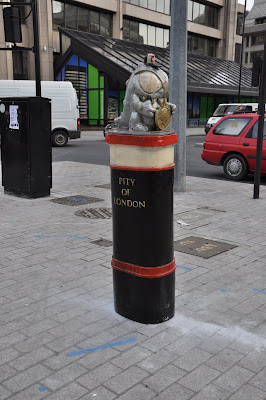 
Ronzo fixes his sculptures in place by drilling into the pavement and installing masonry bolts, a technique he has used successfully in the past. Anyone wandering around Shoreditch staring at their feet and let’s face it, the place isn’t lacking for emos, may have chanced upon small cement frogs drilled into the pavement. For sure at least two of these three inch high petrified amphibians survive to this day though they bear deep scars as evidence of determined but doomed efforts to remove them. 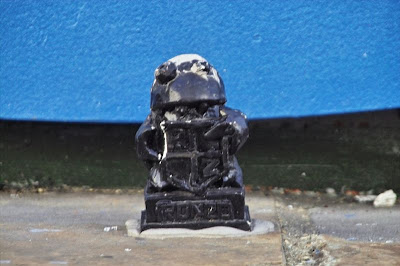 Sadly, in the case of the credit crunch monster at Bishopsgate these precautions weren’t enough to prevent either the purloining or buffing, who knows which. 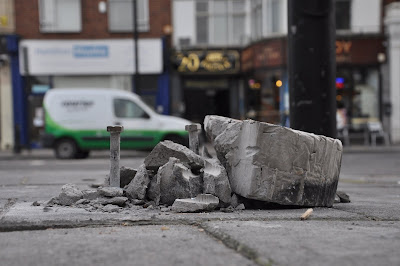 Crunchy is a slavering ganged saber-toothed derivative of a beast which has featured in a number of Ronzo works over the years. 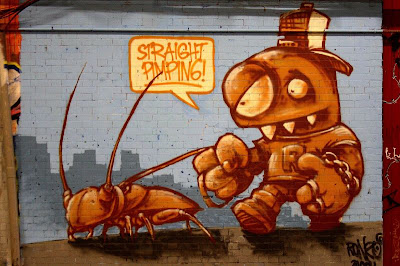 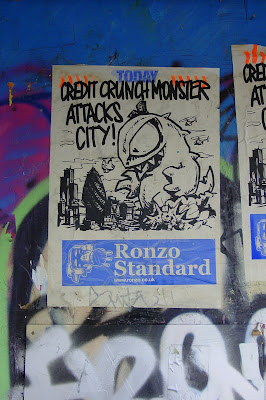 
One fascinating relic displayed at a stolen Space drawing show in late 2008 was a scruffy piece of A4 which contained details of Ronzo’s planning for locations and drilling requirements for the plague of frogs in 2007. Graffoto also found aconcrete playstation casting on the floor in Commercial Street but has never established whether it was Ronzo or a copiest. 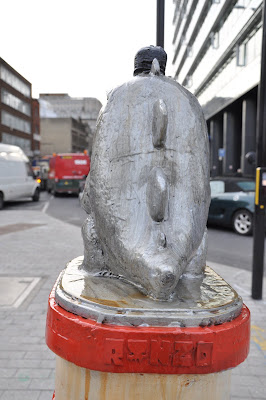 Although Ronzo’s website says this installation of Credit Crunch monsters is in celebration of the end of the recession, we like to think that unlike the dragon his tongue is firmly in his cheek. Surely Crunchy looks like he is still on the rampage, devouring coins and economies. Although the plinth mounted Crunchy further up this writing is clearly showing his arse to the gateway dragon, the Crunchy on Bishopsgate was directly facing the dragon on the other side of the road and we prefer to see him as a threat, Crunchy saying that he hasn’t finished his meal of half-baked economy, he shall return. 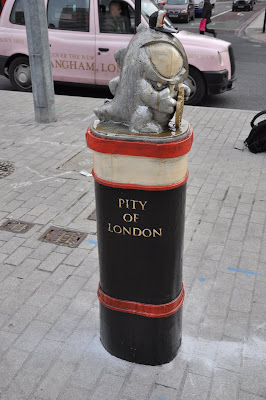 ps – a “Fenn” of dragons is the correct term according to Little Miss NoLions and she should bloody know.
Posted by NoLionsInEngland at Monday, February 01, 2010

Email ThisBlogThis!Share to TwitterShare to FacebookShare to Pinterest
Labels: Ronzo