We are just over halfway through October so it must be time to reminisce fondly on the street art that appeared on Shoreditch walls back in September. We can also reminisce on the good old days when the part of Graffoto wandering round with a camera would let the part of Graffoto that thumps the keyboard keys know that the pics were ready in the draft box;-)

MJar put up some wonderfully hand coloured and spray finished paste ups then he got round to fighting evil nasties by putting his paste up faces over advertising for a record which was trying to pass itself off as street art. 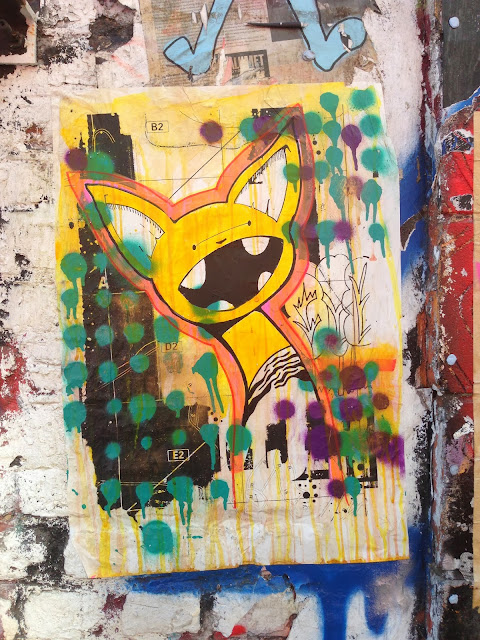 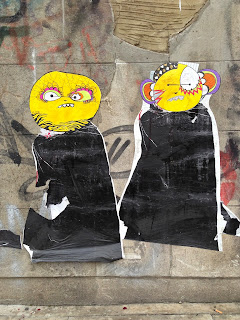 
Art Is Trash is still around and still looking like the big new thing in street art for 2013. The non conformist anthropomorphised packaging of his installations continue to defy categorisation as domestic refuse (white bin bags) or restuarant waste (black bin bags) and so create a pavement mess for quite a few days! He also takes up cudgels on behalf of the virtuous by assaulting flyposters placed over graffiti, the particular modification below were truly spectacular. 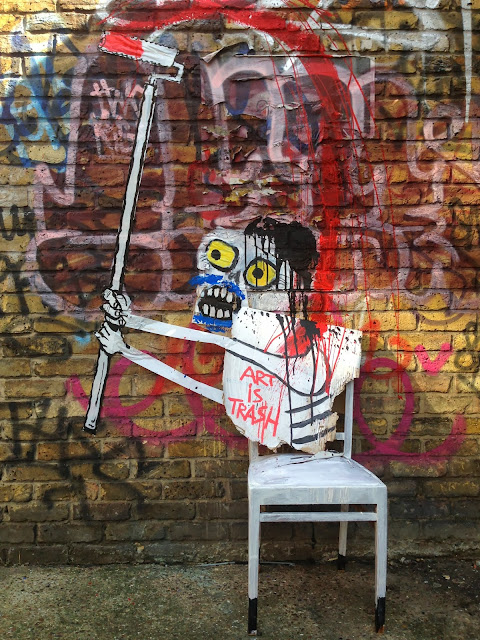 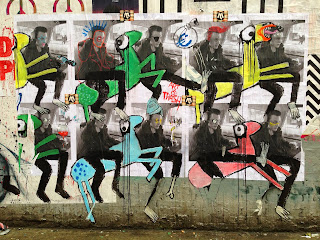 
Is was nice to see Pablo Delgado back at the bottom of the brick canvas, this particular example of his work being quite epic. 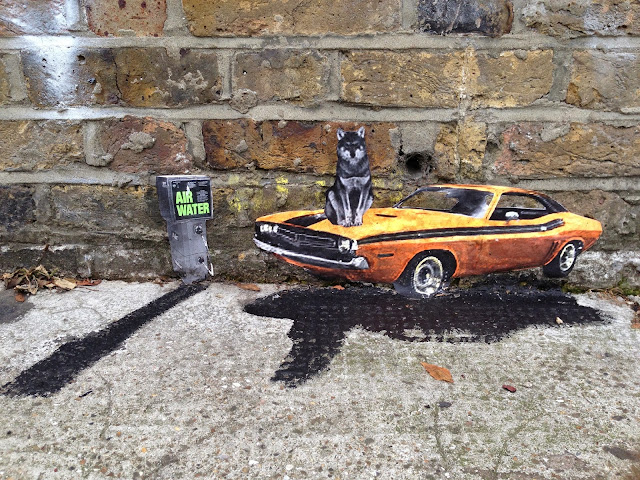 
Our favourite Brazilian Cranio rounded off his visit to London with this scorching Mural showing hs friends the rainforest indians enjoying their drugg, pets, iPhones and replica kits in a denuded brown landscape stripped of trees. Sadly the day after he left some toys went to town tagging it. 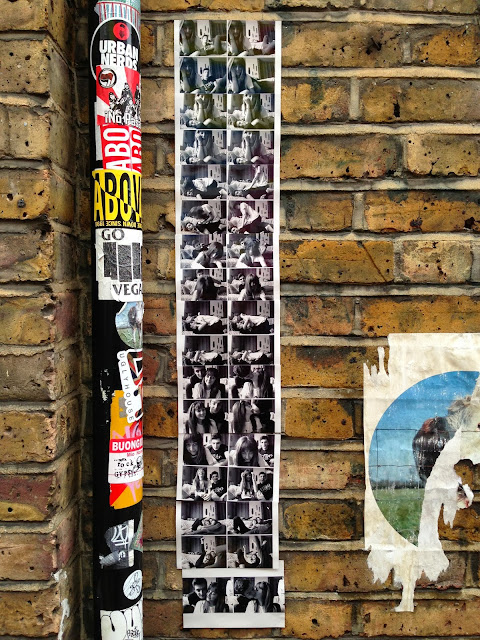 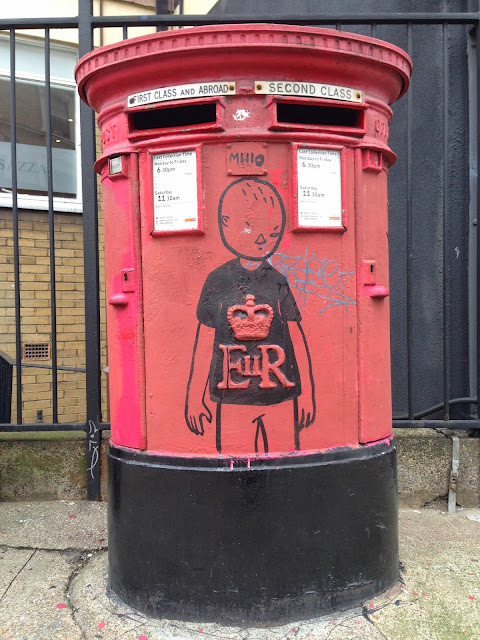 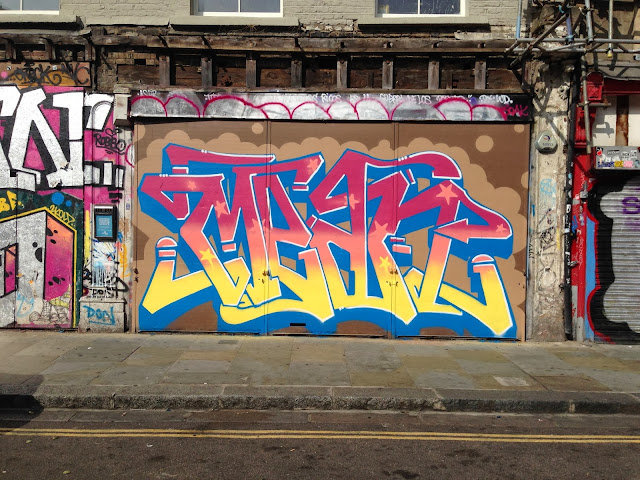 
Saki was pretty busy this month in particular doing some wonderful stuff in the windows and doors of a barred abandoned building but this isn't it. 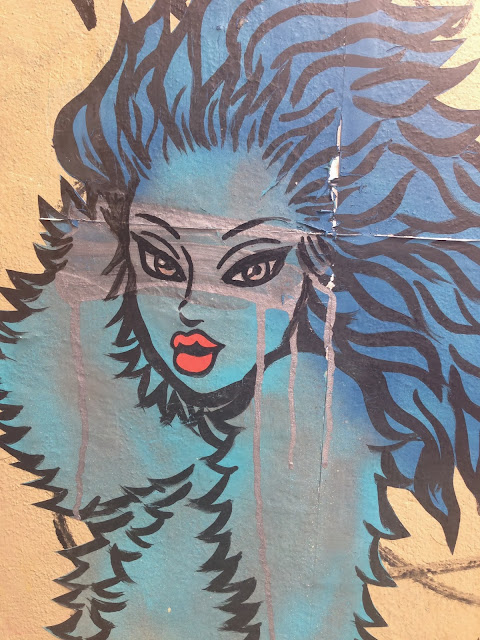 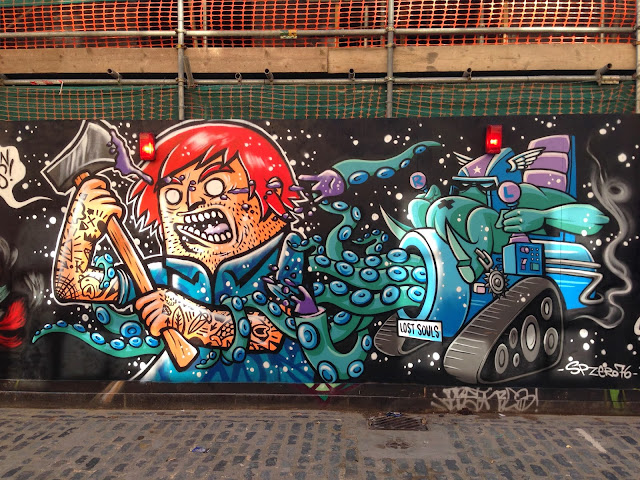 
It has been quite a while since a street artist provoked such unanimous hostility as 2-Square, perhaps it is the work on the walls, perhaps it is the dippy hippy over the top sheepskin look, I'd like to think it was collective critical horror at their piss poor painting slap next to the Roa Hackney Road rat 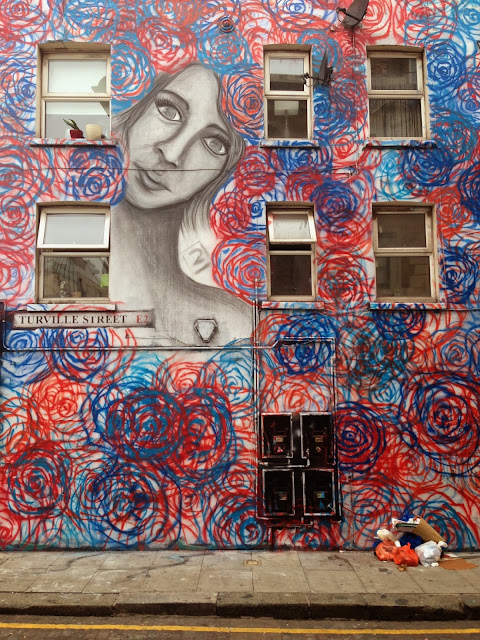 
C3's work has charmed us mainly by dint of appearing in D7606's old phone boxes and vintage TVs so it was nice to find this large size heavy duty one off solo piece of work. 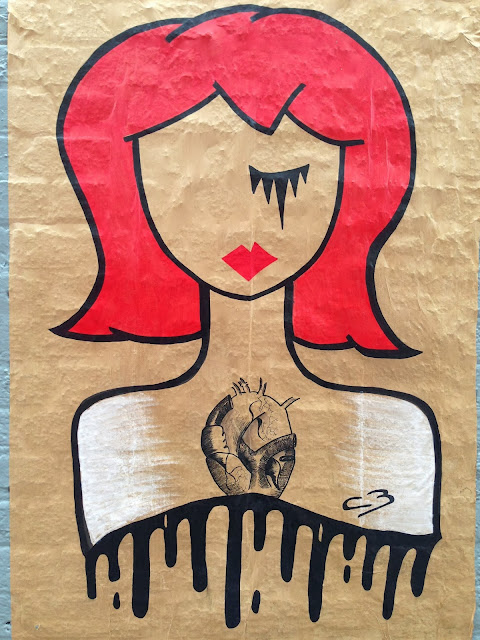 
Also making a more than welcome return to Shoreditch's walls was environmentalist Xylo. It has not yet been determined if this tile is referencing the work of sculptor Jacob Epstein or a droid. 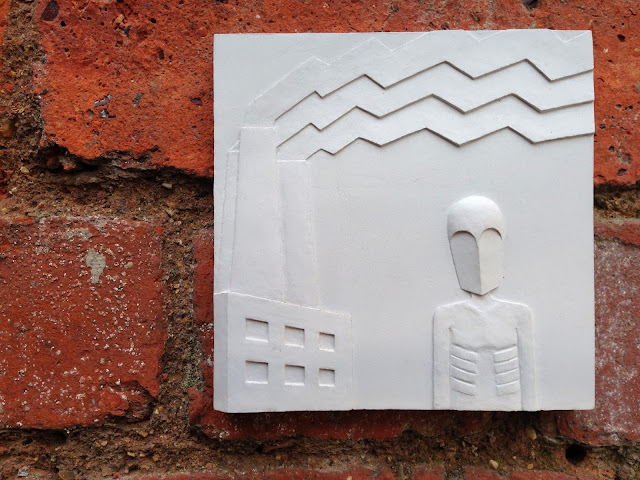 
To finish this look back, this manic cracker on the home turf of HowAboutNo from the cans and brushes of Rowdy and Sweet Toof 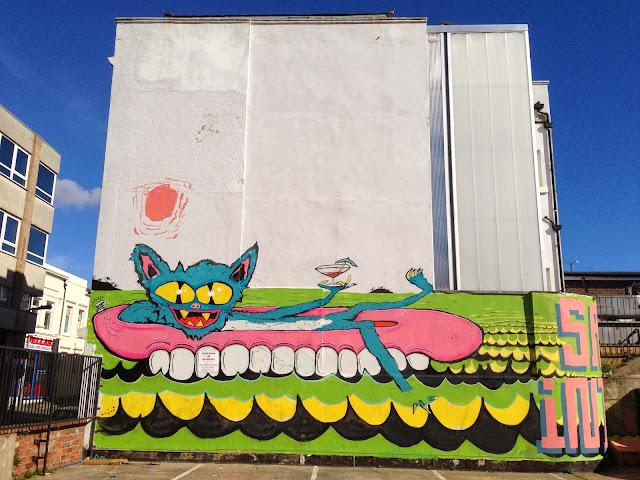 
A nailed on dead (literally!) cert highlight for each of the past few years has been the Lazarides’ offsite exhibition expedition which in the past saw the gallery packing their toiletry bags for Bedlam, The Minotour and Hell's Half Acre in the Waterloo tunnels. This year’s jolly is off to an unattractive grey former accountants’ office block at 180 Strand, London which sadly is just so plain and ugly it doesn’t even deserve the inverted poetic description “brutalist”.

This show feels more about how artists have harnessed the gentle light of the space than about responding to Brutal as a theme. Many of the works interact with the very limited light available in ways which throw their influence much wider than the work’s own footprint.

The one I kept going back to on both my visits (so far) is the awesome installation by Know Hope who grabbed the reflective oily pool gimmick before Doug Foster turned up. Know Hopes has always been strong on installations and dioramas but here he kicks things up a huge gear on an abstract emotional level. It’s all about missing parts not missing hearts, rectangular holes allow found views, found light rectangles and chance vistas. It’s about absences and the play of light through those absences played out with a heavy Twin Peaks meets Blair Witch Project atmosphere. Stanley Donwood will be tearing his hair out.


Next highlight is Lucy McLauchlan. Lucy brings a rougher looser feel to this almost immersive experience as slightly heavy and indistinct figures swoop and gyrate through this gymnasium for acrobatic goths. The movements and curves traced by her leaping dancing figures create a dizzying sense of sweaty chaos and the music from the nearby Doug Foster installation suited McLauchlan’s room more than it did Foster’s cinema.


Having mentioned Foster a couple of times already it’s best to put that experience out of its misery. The slow churning light is present, the epic growling soundtrack driving the sub woofer through the neighbours’ ceiling has turned up but those infinite reflective surfaces are missing. What is left is a very very widescreen light animation, a bit like watching tv through the gap under the door. The revolving kaleidoscopic imagery seemed at times to suggest long leaved weeds waving under water then sometimes perhaps strange animated seed like structures viewed under a microscope, all pretty abstract but not sure that it achieved anything either itself or within the context of a curated show, two ways in which Foster installations at previous Lazarides shows scored heavily.


Cleon Peterson had a very strong show at the Greek Street Lazarides early this year and proves at Brutal that this was no flash in the pan. His mural is filled with pain, brutality and a lack of compassion and it presents a particular challenge, to view the figures smoothly across the many surface fractures caused by a staggered series of wall steps, we need to lower our eye level to the same height as the traumatically assaulted victims of this tableau. Peterson is killing us.


I haven’t seen any Brad Downey indoor work since the disappointing 2009 show with Stolen Space but his Tarpaulin Café here really works well as an installation setting for what appear to be photographs of Brad Downey urban interventions and observations involving apertures in those building site net fences which have an image of the façade they are hiding. He has in the past created these holes in the nets himself, that was his art but this time it seems he is finding the holes and highlighting how the holes tear a gash through the idealised vision of the “artists’ impression” that developers deceive us with. The café setting gives an collection of surfaces, textures and light and shadow interplays which have all the ambience of a poolside bar in a war zone, in a good way!


Moving onto artists I haven’t come across before, the work of Ben Woodeson was multi-layered chin dropping. Plates of glass and light interact to impose themselves on audience and surroundings in ways which could be either lightweight, perhaps the suggestion of a long shadow, or really heavy as in “this could slice through you”. Best get your retaliation in first by simply standing in the way of the strong illumination, this way you change the light and the shadows, imposing yourself on the way which the art work throws itself around the space.


Conor Harrington matches Cleon Peterson blow for blow in responding to the theme brutality, Antony Micallef doesn’ t take us anywhere he hasn’t before with his dark impressionist portraits while Katrin Fridriks brings an abstract beauty to the game.


What do you expect attending an exhibition called “Brutal”? Pastoral landscapes and whimsy this is not. For all the fun with light and shadow play, no illumination was spared for the impossibly dark installation notes taped to walls around the place. Although the core theme perhaps is not as strongly defined as in previous outings some of the installations and spaces are stronger, harsher and often far more subtle than the previous experiences. As with all the Lazarides’ previous offsites, repeat visits are called for.

Mark Jenkins (again, for me, it's all about the light and shadows)