One characteristic of the austere and spendthrift new age we live in is that the great American giants of the urban art scene have been noticeable by their absence from London this year – give or take a Ron English show in the past week. Jeff Soto bucks the trend by coming to Stolen Space for a new solo show – hold on to that sentence, turn it over and over and see how many words make you feel gooooood.

Wandering over to the Truman Brewery last Friday to have a daylight peek at the show we un-expectedly find Jeff Soto merrily painting away on an outside wall, and some would have us believe that this is the first time in a long time he has painted without the benefit of a ceiling. 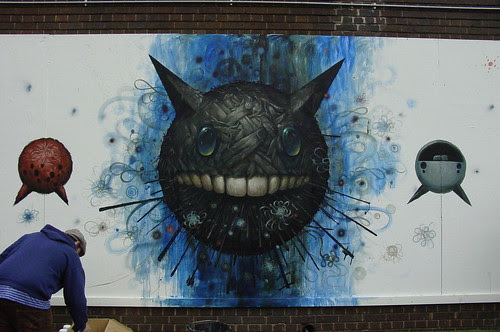 
Soto eschews the purists pre-occupation with the spray can, applying his acrylic paints with a “normal” sized art paintrush. The fine-ness of the draughtsmanship leads to a plea for loan of a finer paint brush, we didn’t have the nerve to make our offer of a strand of hair too loudly. I say “we”, this is the royal version as of the small bunch of observers I was the only one who actually bothers with a comb these days. 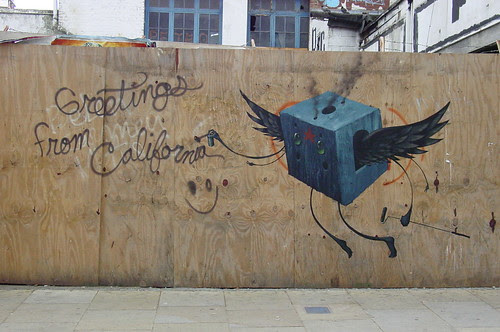 
Stretching my employer’s patience over what constitutes a reasonable length Friday lunch break, I wander down to the Whitechapel end of Brick Lane and find two more Soto wall pieces. A third is Work in progress and a forth remains un-discovered –something to chance upon in the near future hopefully. 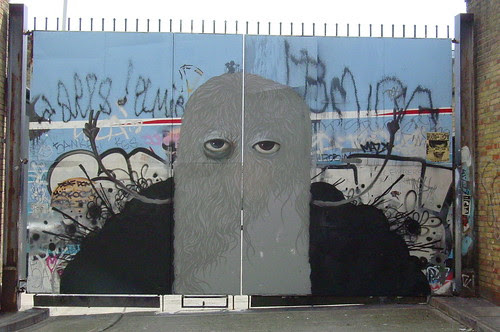 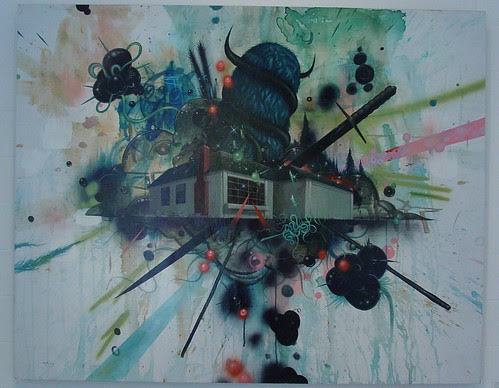 Love Can Surpass All Obstacles


Many of the compositions have a slightly bleak or post-apocalyptic landscape effect with recognisable “old world” features, a car here, telegraph wires there with centre stage taken by fragments of shattered remnants of a ruined eco-system. 
Soto’s work is reported as featuring strong personal and political themes and with this show the chosen role is harbinger of environmental doom. Nature’s Wrath shows a fanged beast of various flora suspended in a demi-world of noxious fumes and sparking chemical eruptions set above a blasted landscape featuring a nodding onshore oil pump. 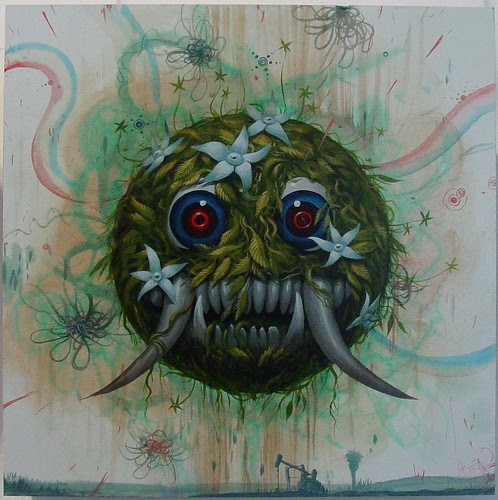 
Soto’s concepts are painted at various scales, with orbital circles suggesting paths of atoms at the sub-molecular level, rising up to exploding cars at the human scale and Mother Earth bearing the scars of man’s poisonous destructive activity at the grandest scale. All on the same painting. 
Motifs which recur include rictus grins of a skeletal gumset whether actually in a skull or in a symbolic world-as-furry-mutant, and overgrown shaggy hair, fur or foliage. In Self-Destructive, Soto appears to reference a idea that nature herself lures us with her beauty but prompts us to destroy it to access her rich minerals, woods and oils. 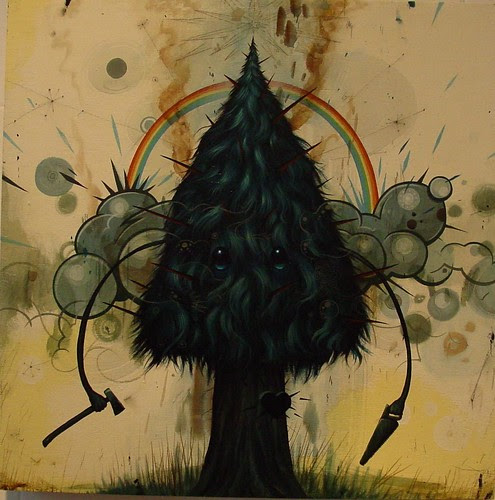 
Scrutiny of the detail reveal an astonishing precision to the painting, an illustrator’s skilled hand being very evident. Although the themes are dark and dense, the paintings themselves posses a wonderful warmth. 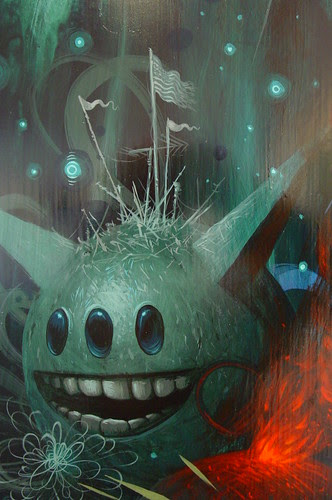 
Many of the paintings are done with a very surrealist composition with fantasy futuristic overtones. One tends to be reminded of the lurid covers of books in that certain section of the municipal library where only the sci-fi geek, the day-of-the-triffids nerd and the lost dare wander. 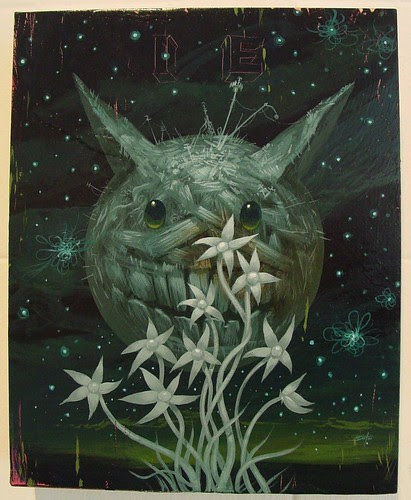 
Furry animals and shaggy haired humans populate some of the pictures, the tufted fleece of these figures echoes something like the accepted representation of a mammoth’s coat (how do the palaeontologists know what that looked like?), perhaps in Soto’s future world our fate has been to endure a reverse evolution to survive the perilous environment he has created. It is not clear in the “Self Portrait” is Soto beating his breast and accepting blame or pleading victim status. At first glance I thought he had painted himself enjoying a toke through his pre-neanderthal beard. 
Fantasy art, sci-fi books and comics are the last refuge of the irretrievably adolescent and I have never been able to get any further than Douglas Adams, so it comes as a shock to me to find that I love Jeff Soto’s work. “Inland Empires” was so good it prompted something that the last dozen shows since Kid Acne at Stella Dore have failed to do – it restored my enthusiasm for uploading a few pics and banging out a few words. 
Words can’t do justice to either the content of Soto’s painting or to the beauty of his craft so compensate for the inadequacies of the write up by checking a set of show pics here:
Posted by NoLionsInEngland at Monday, May 18, 2009 No comments:

A fairly prominent wall in Shoreditch, almost a whole building 'taken out'. . . HA and ID crews in attendance.... 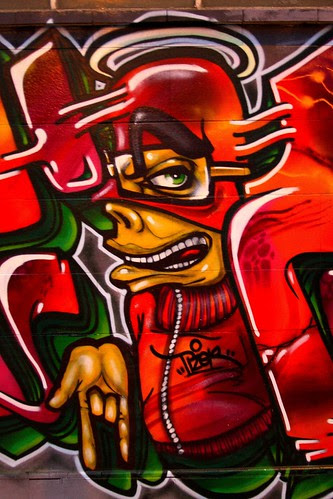 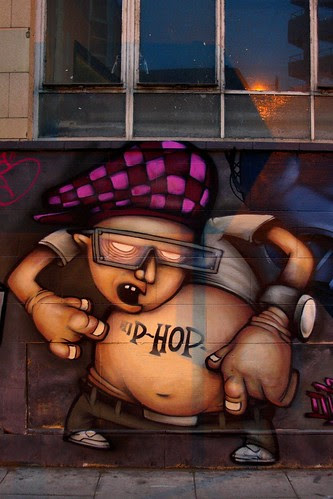 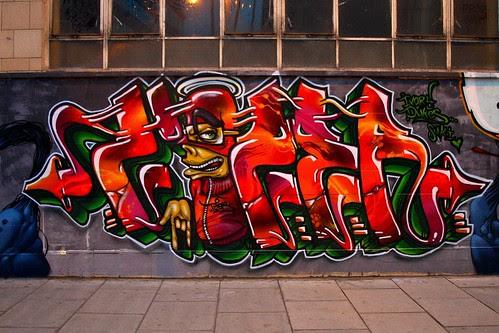 Buffed by the trigger happy council boys like everything else? Who knows!

But by christ if this is the shape of the future state of Shoreditch, I like it!
Posted by HowAboutNo at Wednesday, May 06, 2009 1 comment: