A new Banksy has appeared in London and locations do not get much more central than on the roundabout at Marble Arch! 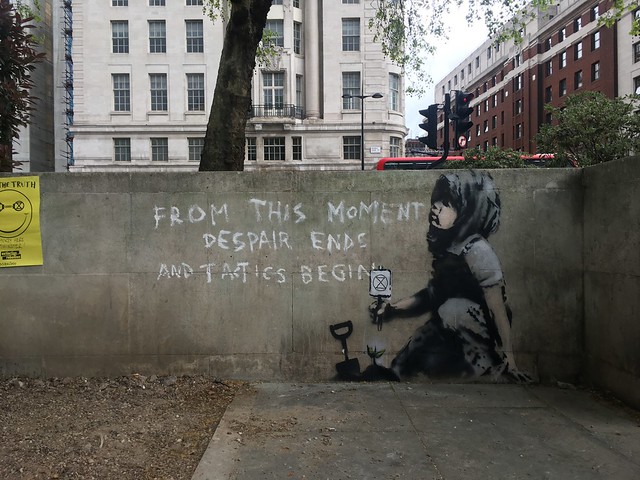 A young girl appears to have planted a new sapling and seems mark the species with a plant label stating through the extinction symbol that it is the Extinction Rebellion and like any optimistic gardener, it is planted in the hope of growth hence Banksy’s slightly odd proclamation “From this moment despair ends and tactics begin”.

Are we a bit early calling this as a Banksy – at the time of writing "yes" is the answer. There will be doubt right up until the moment it appears on either his Instagram feed or the Banksy website. For now, there seems to be several strong reasons for believing this to be a Banksy :

The politics of the piece; it is in favour of an environmental cause, specifically the Extinction Rebellion. The most recent confirmed Banksy street art was his “Seasons Greetings” toxic snow stencil in Port Talbot, South Wales, so this new piece aligns neatly with a Banksy theme. 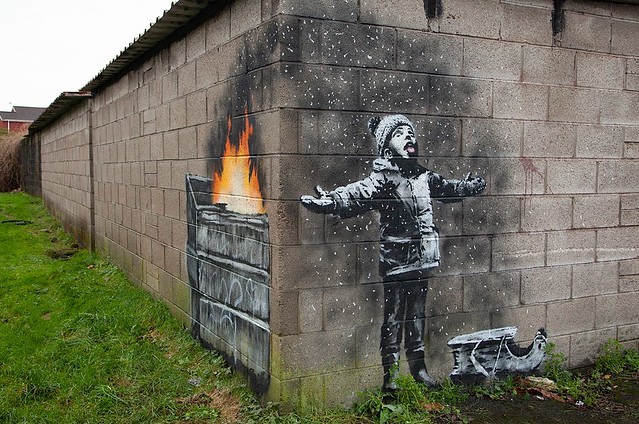 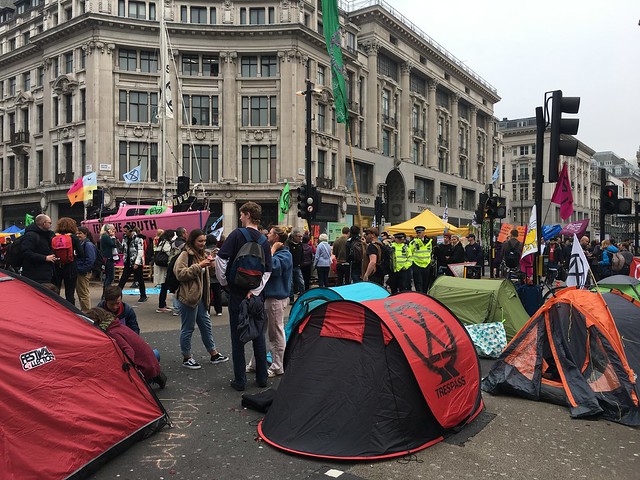 
The location: This Marble Arch spot was one of the key Extinction Rebellion London blockade locations and indeed following the peaceful ending of the protests in the other locations it was the final location protested until officially ended with a closing ceremony yesterday (Thursday) 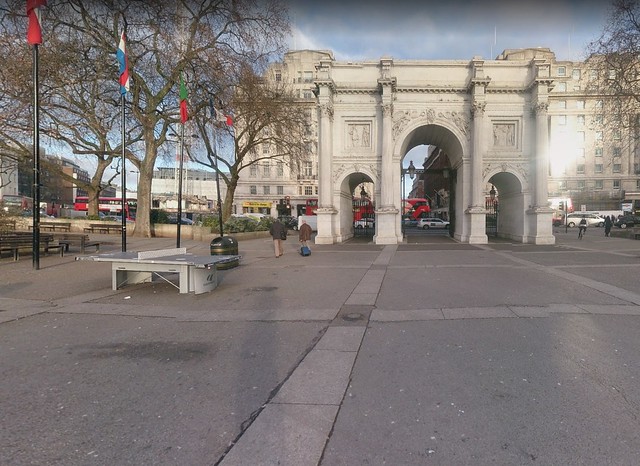 
The Banksy Look: the art is primarily stencil with wax crayon text, it looks like a Banksy in general. More specifically, the image of the girl is a mirror image of a female seen in a piece of Banksy “Indoors” art housed in the Walled Off Hotel in Palestine. This appears to be pretty incontrovertible evidence that it is a Banksy. 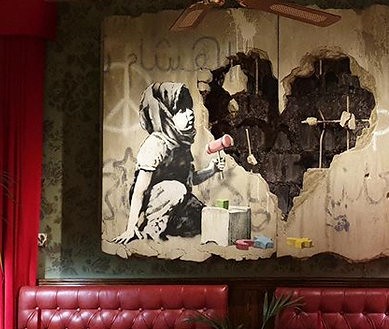 
On Wednesday the Met Police were reported to have made it a criminal offense to incite others to protest outside a designated area following new conditions imposed under a Public Order Act. Banksy would appear to have flaunted this as well as several other Criminal Damage statutes. Well done. 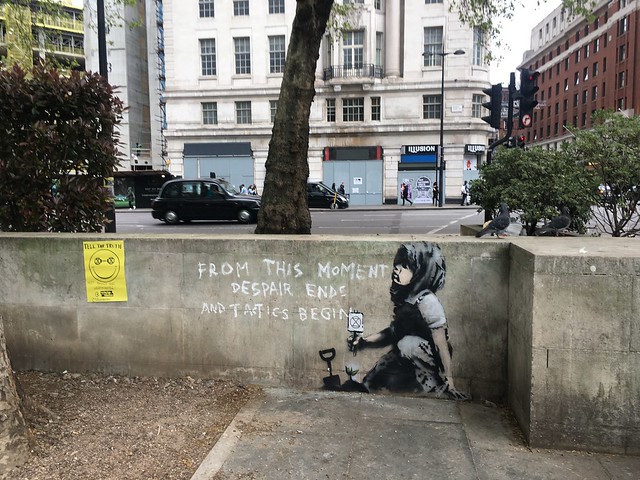 Looking a bit deeper at Banksy’s actual message, it appears to be a quote taken from "The Revolution Of Everyday Life" by Belgian Situationist International writer Raoul Vaniegem. The passage reads

“My sympathy for the solitary killer ends where tactics begin; but perhaps tactics need scouts driven by individual despair…. These tactics will be condemned to theoretical hibernation If they cannot, by other means, attract collectively the individuals whom isolation and hatred for the collective lie have already won over to the rational decision to kill or to kill themselves. No murderers-and no humanist either! The former accept death, the latter impose it. Let 10 men meet who are resolved on the lightning of violence rather than the long agony of survival; from this moment, despair ends and tactics begin. Despair is the infantile disorder of the revolutionaries of every day life.“

In one part, the idea of desperation of fighting against the lies of a higher authority was one of the core messages of the Existential Rebellion. On the other hand the author appears to be urging action through violent means which was not an Extinction Rebellion tactic, they were explicitly pursuing peaceful mass protest. 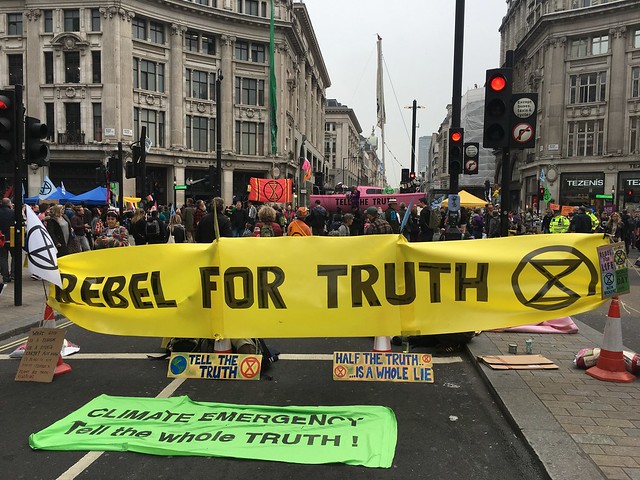 
Of minor interest is Banksy’s clever reversion to vandalising public property as opposed to privately owned property, at least the god awful art speculators hopefully can’t step in and snap this up like they did the Port Talbot piece and the Cosette Gassed “Les Miserables” French Embassy piece. Contractors were seen lurking around the Banksy this evening and rumours were that they were there to install perpsex to protect it. Presumably this would have to be a Westminster Council initiative, which is amusing at several levels, not least the fact that they traditionally are anti graffiti and secondly, found the Extinction Rebellion a pain in the arse they had to tolerate through gritted teeth. 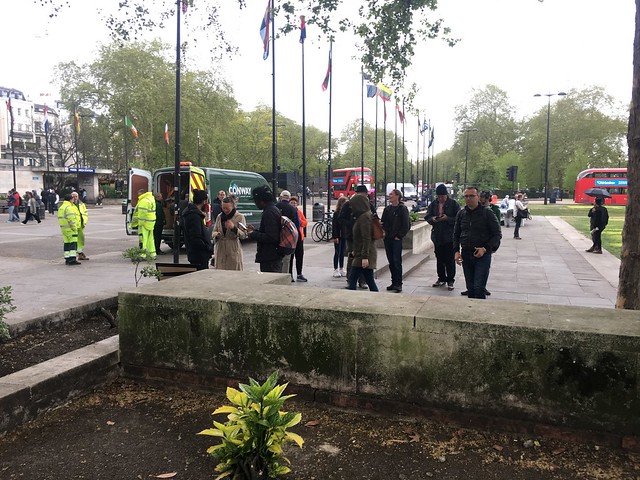 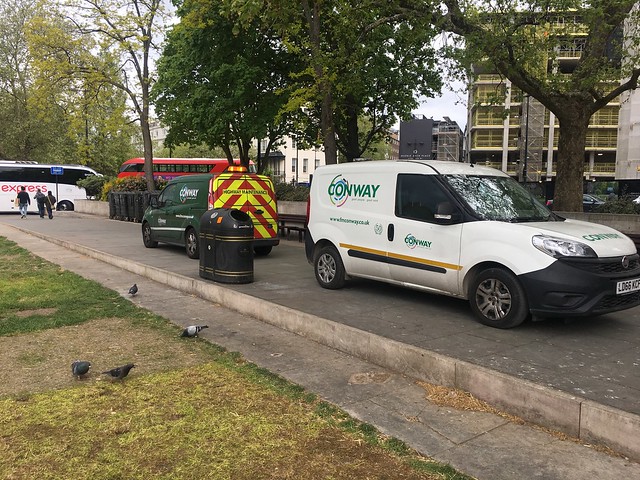 So there it is, a new Banksy in London found in pristine condition and at the time of this visit unprotected, such a rare pleasure these days.

Photos: Dave Stuart except where credited

Posted by NoLionsInEngland at Friday, April 26, 2019 No comments: