Went to London Art Fair tonight, optimistically hoping to find some inspiring and directional contemporary art prior to optimistically popping out to watch Southend beat Chelsea in the cup replay.

London Art Fair isn’t the kind of “annual fair” that is going to have Heathrow flight marshals working overtime. In these austere times its hard to imagine too many hedge fund riche schlepping over from even Mayfair. London Art Fair is to Freize as Margate is to Monaco.

Mark Demsteader was probably the only fuse-blower for me. The pastel and collage and oil and collage images, and a load of the un-hung stuff looked stunning. Very Micallef in some respects. The collage element amounts to rough cut blobs of paper sparing applied on the picture, then drawn over, the paper looked possibly hand made, very coarse. The collage elements provoked a lot of close peering, as they added relief to the surface but nothing to the composition. 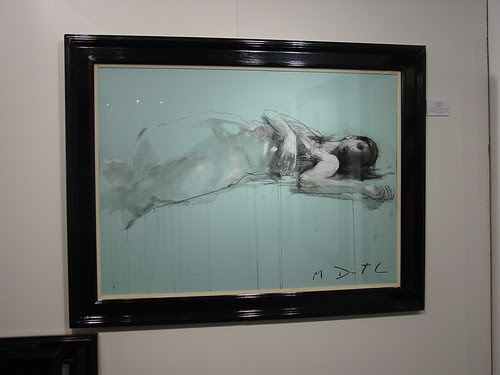 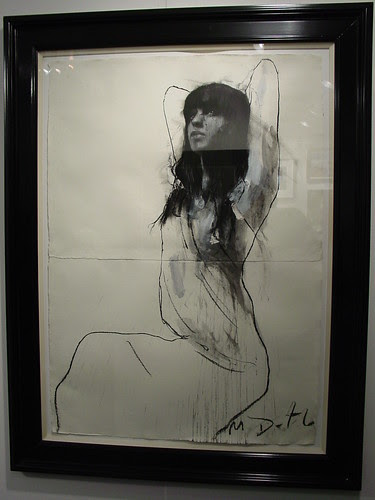 
Julian Opie was dotted around on several stands, this pair of screenprints on acrylic on Dominic Guerrini Fine Art looked gorgeous but the ones that really had me panting were a series similar looking triptychs described, if memory serves, as flocked acrylic. Sure enough, close scrutiny suggested that the figurative black outlines had been rendered by compressing fuzzy-felt under glass. 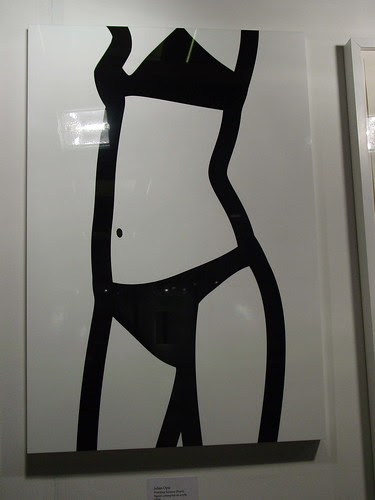 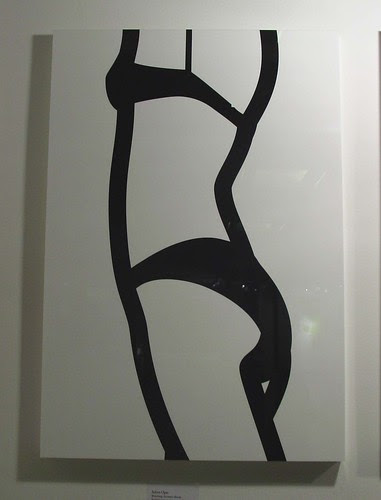 
Another piece to catch the corner of the eye was this tasty and colourful romantic urban pop fusion by Michael Victor presented by Bath based Edgar Modern. For once the drips manage to avoid looking too deliberate. The Bath bit is important as we watched them wheel out from under the table a hideous allegedly Banksy stencilled helicopter on a framed piece of plaster. Compositionally, Static would have blushed, it was truly dreadful. We listened somewhat agape as the gallerist assured an enquirer that his stuff on walls was more valuable than his studio stuff. Yours for thirty odd grand, provenance to be questioned! 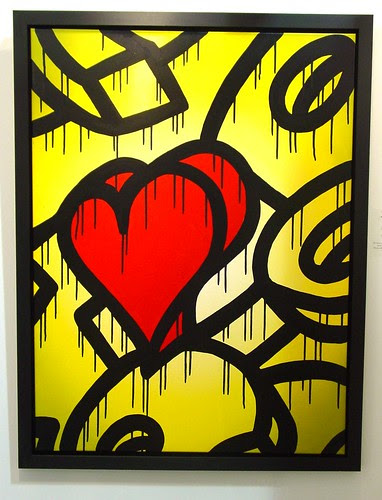 
For anyone who cares, had a peek at Black Rat’s new Nick Walker print, I liked the fact there was a touch of blue in the sky which the London Morning After lacked.

The beauty of wandering around this sort of show where 99.9% of the names are new (to me) means a sort of naïve gut response is possible, though thankfully there was little one would regard as provocative enough to make one puke but too much looked like it wouldn't be slumming it on the Hyde Park railings on a Sunday. The art result was as disappointing as the Southend result.
Posted by NoLionsInEngland at Thursday, January 15, 2009 2 comments: