Photos: NoLionsinEngland except where stated


There are few joys greater than the unexpected discovery of a stunning piece of street art. Finding something with beauty and meaning and which you were totally unaware of gives a buzz very little else can match. While cycling along my well worn route into Shoreditch recently something caught my eye on a no entry sign. 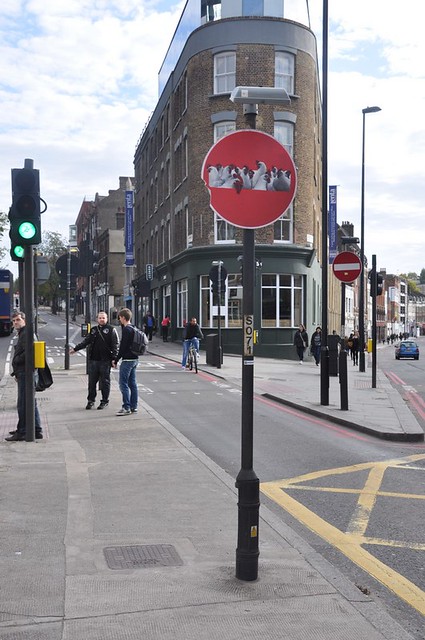 I pulled over, I photographed it, I puzzled over it. My instant assessment was – it’s on a traffic sign; it’s well made; it’s perfectly placed; it must be something new by Clet Abraham. Something niggled though, the cluster of tight packed chickens didn't make me smile which is a Pavlovian response to any Clet Abraham traffic sign subversion. As I cycled up the hill within 2 minutes another new bit of street art caught my eye. 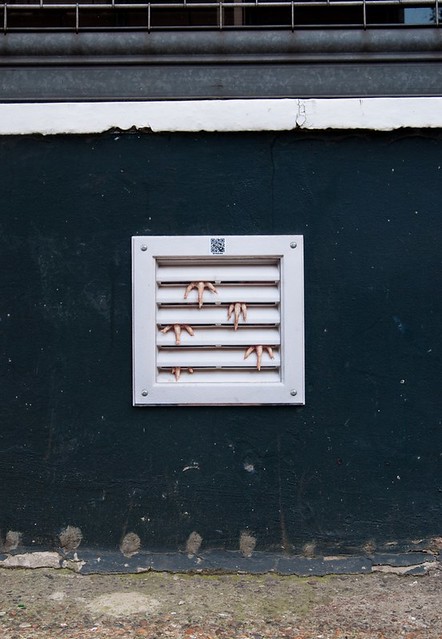 This one had clear provenance, something trapped behind a grating in a wall clawing to escape is classic Dan Witz from NY. As I photographed these incarcerated chickens a possible connection sprung to mind, were the chickens I had just seen at the bottom of the hill therefore also by Dan Witz? A moment on google when I got home revealed London was hosting a new Dan Witz campaign which had somehow completely escaped my attention. 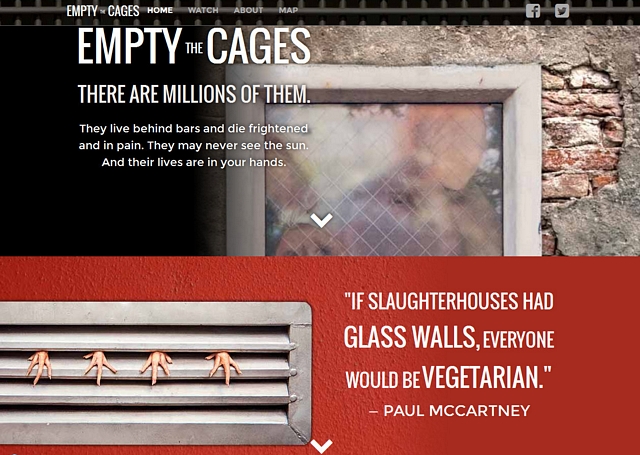 
The last time Dan Witz was actively creating street art in London was around the time of his "Prisoners 2012 – 13" show at Lazarides Gallery in January 2013, inserting a series of artworks into our urban environment to raise awareness of the mistreatment of prisoners, a project he worked on in cooperation with Amnesty International. 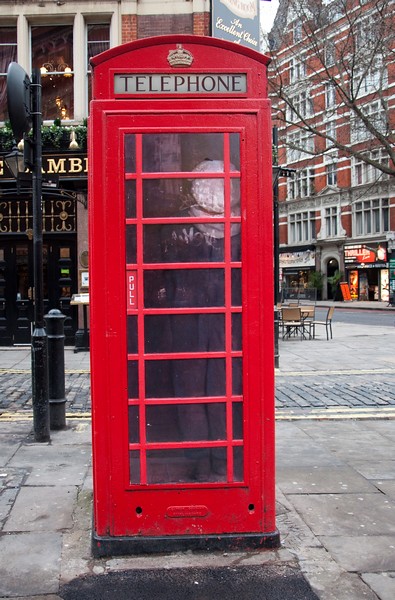 Empty The Cages is a new PETA (People For The Ethical Treatment Of Animals) campaign for which vegan Dan Witz aims to raise awareness of the cruelty inflicted on animals in the quest for more efficient and cheaper meat production to feed the worst parasite this planet has ever witnessed - mankind. Sculptural artworks of cows, pigs and chickens penned and caged have been placed around inner London, as well as the sign based image discovered at the top of the post. 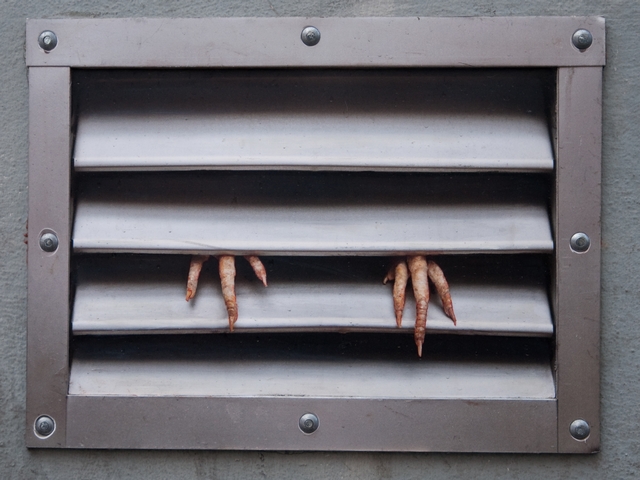 Testimony to my 110% concentration on avoiding death when I ride my bike, I found out that the road sign had been up for almost a month before I spotted it despite having passed within yards of it many times. There is a map on the Empty The Cages website indicating the approximate locations of Dan Witz’s campaign pieces and armed with the map I was able to track down quite a few..about half of them. 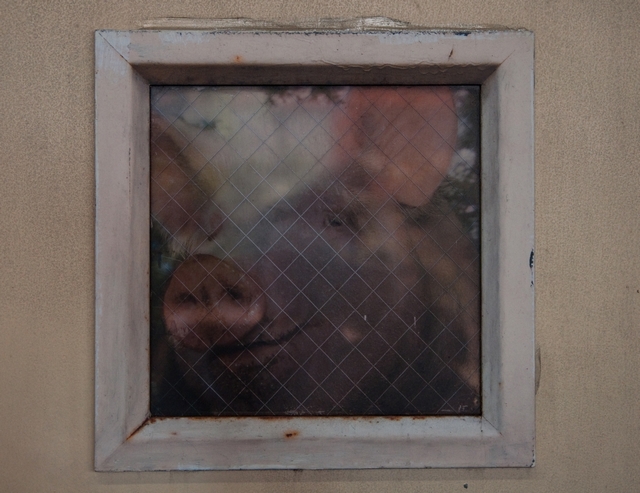 This little pig went to market


Placement is everything with great street art and although the photographs from PETA have chosen not to highlight the placement, a couple of them were placed alongside street artefacts that resonated with the message. 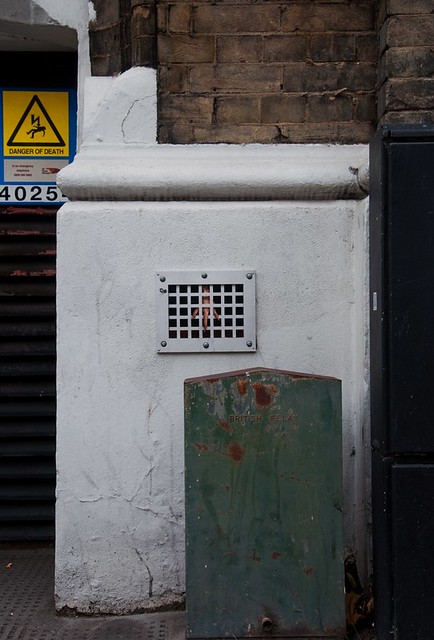 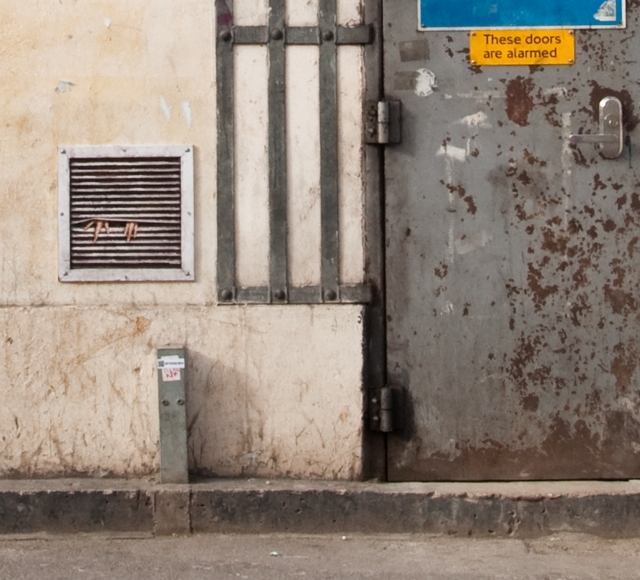 
Several of the pieces are placed around and on Smithfield Market, formerly London's main meat market and therefore a building whose history lends resonance and direction to the Empty The Cages message.


Discovering the one below was particularly tricky but now it’s slightly embarrassing to be reminded on every ride into Shoreditch that 4 of them can actually be seen from the main road I cycle along. 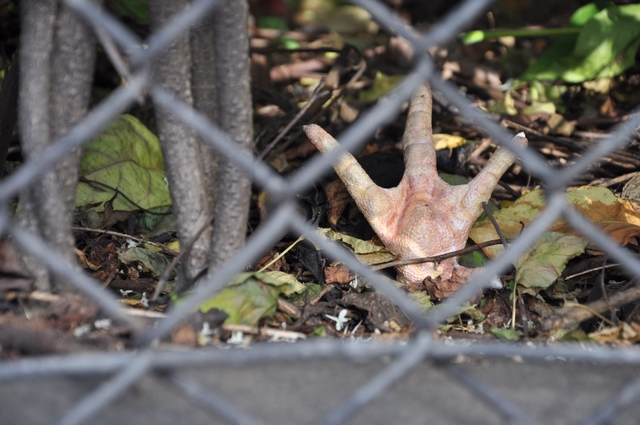 A number of the pieces would defy use of the map for their discovery, for example you could try finding the burined chicken foot in the flower beds around St Paul’s Cathedral but that’s a heck of a lot of soil and damp leaves you’ll be staring at. Some things though are meant to be just found rather than located with a map.  Imagine the impact, the shock at the moment of discovery by someone who chances upon the charnel remains by chance.

Changing your mind about dinner yet? 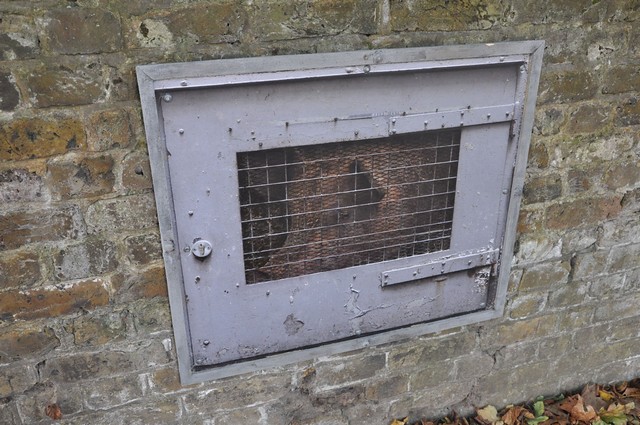 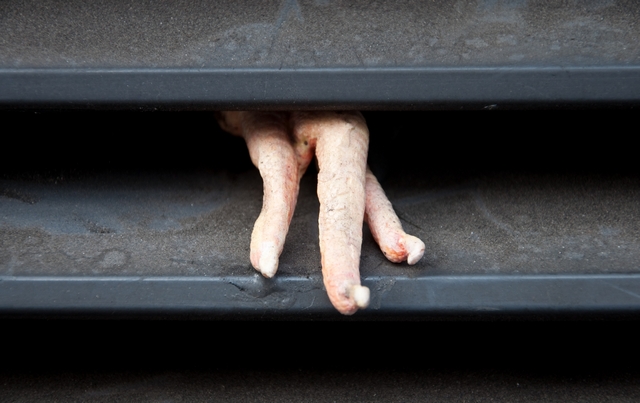 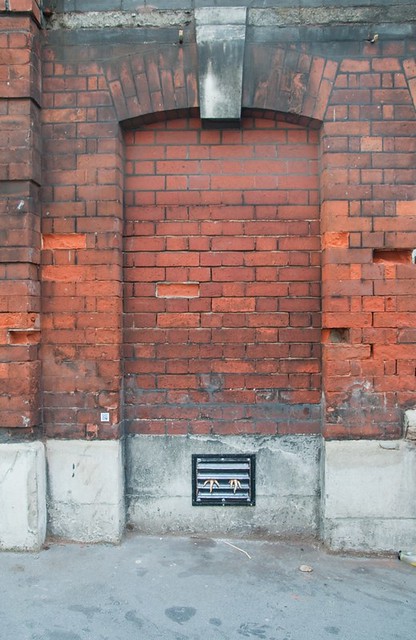 INSA - "The Cycle Of Futility"

All photos NoLionsInEngland except where stated

(Update: see new news on NO AD in footnote at bottom)

Street artist INSA has explored the far off boundaries of technology with his latest hi-tech work "The Cycle Of Futility" in Shoreditch. 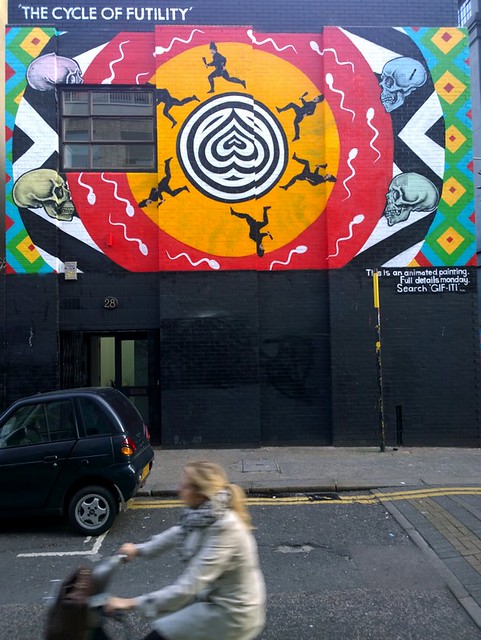 With most street art basically what you see is what you get, the image is the message. INSA though works with the old animation idea of painted frames each one incorporating a small movement from the previous one which you subsequently view as a looping gif online.


He has now pushed the art a further step by exploiting Augmented Reality technology. You download the free App onto your iPhone, point the phone at the wall and the powers of augmented reality replace the static real-art on the walls with the whirling animated gif on your phone. Wow!


The Cycle of Futility features the full rites of passage from life’s beginnings to skulls representing death, while the in-between bit is an unrelenting assault of authority - who'd be a street artist?  Perhaps we can take some pleasure from the fact that the police endlessly chase but never catch anything. 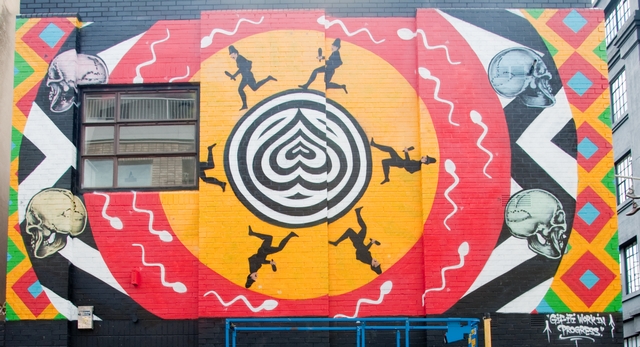 Each painted mural was an important and equal step on the process of creating an animated piece of art, what remains on the wall may appear as a mural but actually the art piece is the App animation. The mural on the wall is no more than just the last frame of the animation, not that it is any less valid as a mural of course.

The technology isn’t new, adverts have utilised Augmented Reality for a while and Jordan Seilers advert busters have appeared in New York where Augmented Reality replaces the advert with a piece of art, thankfully RJ at Vandalog has that covered.

The earliest INSA piece we can recall was a comparatively small seemingly abstract patterned paste up spotted in 2006 though these two photos date from 2007 and 2008 respectively, curiously the tattered remnants of that 2008 can still be made out by Old St roundabout to this day. 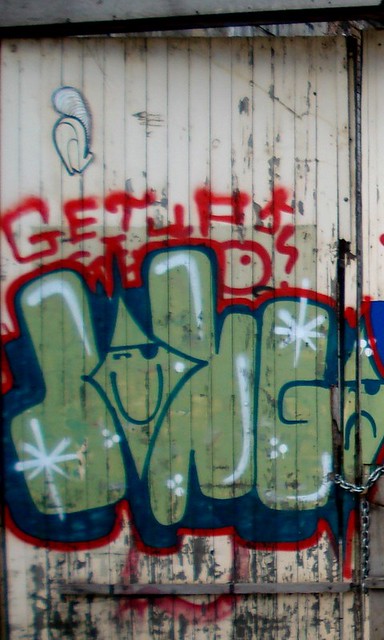 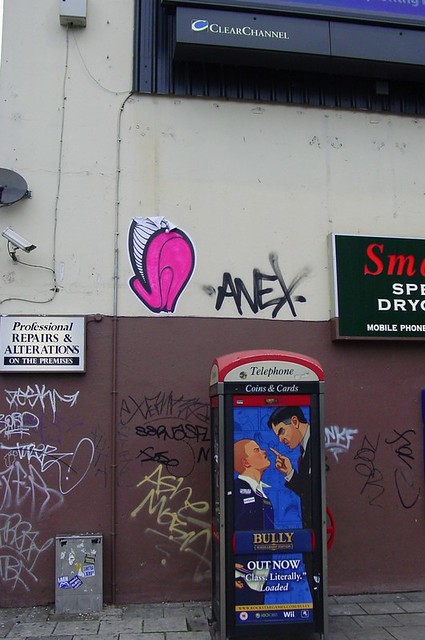 We realised later that the abstract patterns were in fact women’s legs in stripy tights ending in a foot shod in very high heeled stilettos and these were complimented by abstract studies of female buttocks, combined in this 2008 repeating pattern. 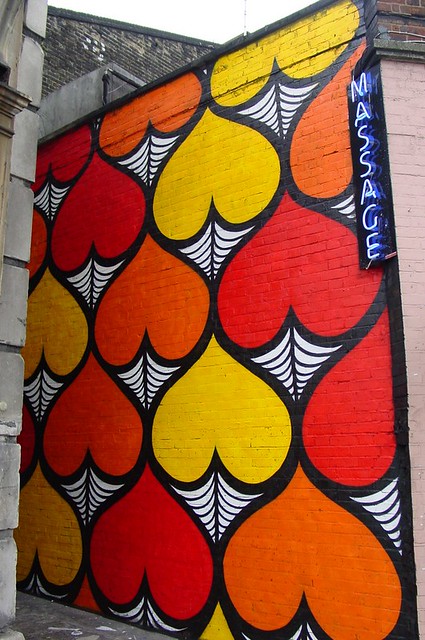 
We also caught up with the fact that INSA started out as a graffiti writer, a background we saw in some stunning bits glossy graffiti writing, this man LOVES bling. 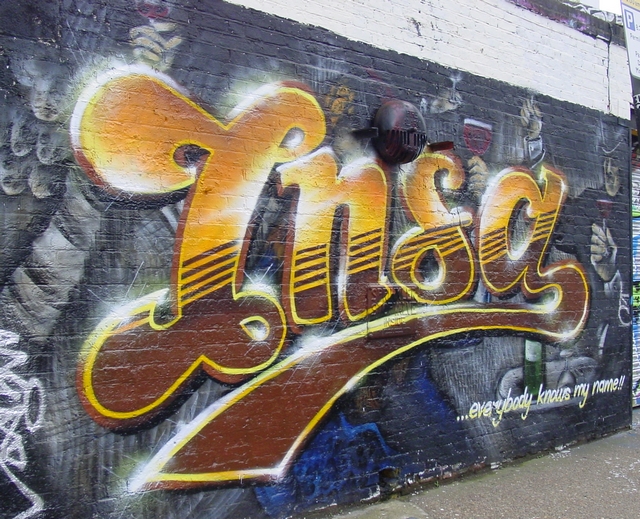 INSA’s art shows have been epic magnificence. In 2012 he showed "Self Reflection Is Greater Than Self Projection", a superb immersive installation room inside the very building the Futility Cycle mural is painted on. 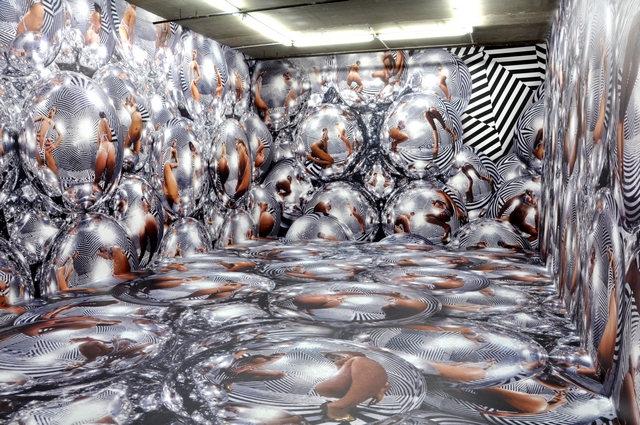 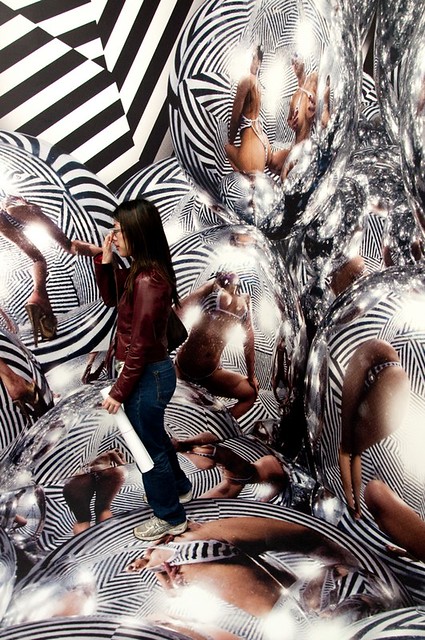 Before that, Insa was "Looking For Love In All The Wrong Places" (2009) 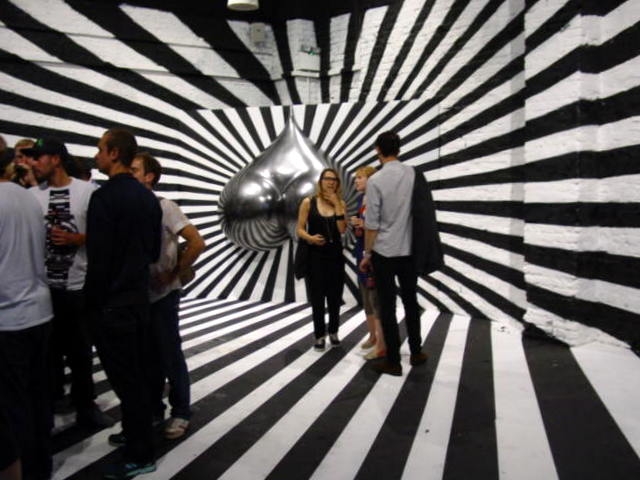 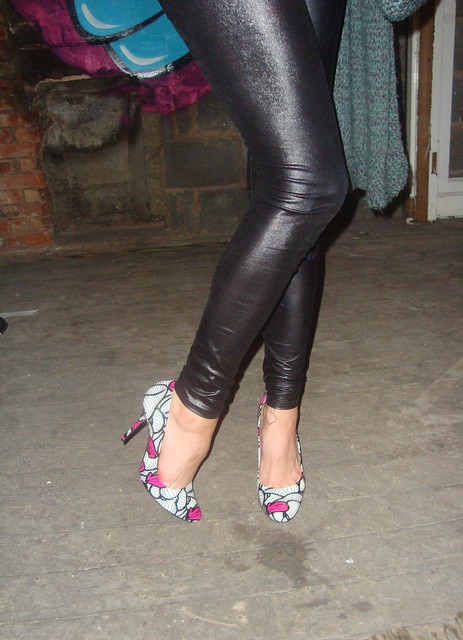 UPDATE FROM NO AD

From mid-October through the end of November, NO AD will display photographic works in conjunction with the renowned International Center of Photography. The first part of the ICP’s participation will be dedicated to Sebastião Salgado: Genesis, an exhibition on view through January 11, 2015, at the International Center of Photography, 1133 Avenue of the Americas, New York, NY. NO AD will include 54 arresting images of fleeting cultures and environment, presented alongside a video of the artist’s thoughts on climate change.

As the first of many collaborations ahead, we want to thank ICP for its vision and support. We hope that NO AD will become an alternative exhibition space for New Yorkers, bringing them closer to the rich cultural content this city has to offer. We could not be happier that ICP has chosen to use this new format to reach out to new audiences in progressive ways.

Graffoto Love:  Looking For Love In All The Wrong Places:  http://graffoto1.blogspot.co.uk/2009/07/insa-looking-for-love-in-all-wrong.html

Graffoto Love: Self Reflection Is Greater Than Self Projection:  http://graffoto1.blogspot.co.uk/2012/03/insa-self-reflection-is-greater-than.html

Email ThisBlogThis!Share to TwitterShare to FacebookShare to Pinterest
Labels: INSA

Art Is Trash returns to London


Art Is Trash is back in town and installed this most unlikely tearful tribute to Robbo on a wall tastefully utilised by Drax and Oker and Pure Evil (out of shot) as a Robbo tribute then distastefully partially painted over too soon by Endless. 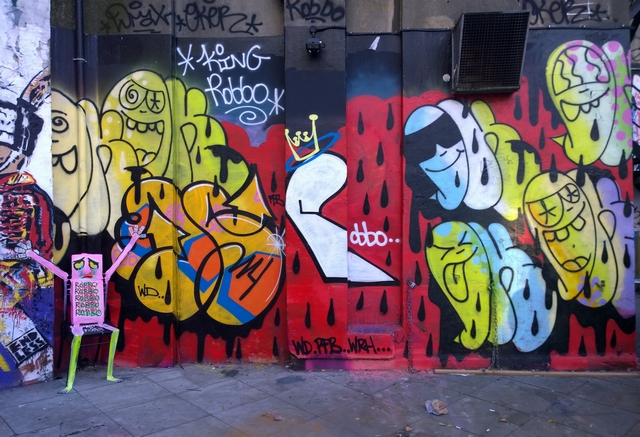 I doubt there is a more flamboyant performer in the world of street art than Art Is Trash. 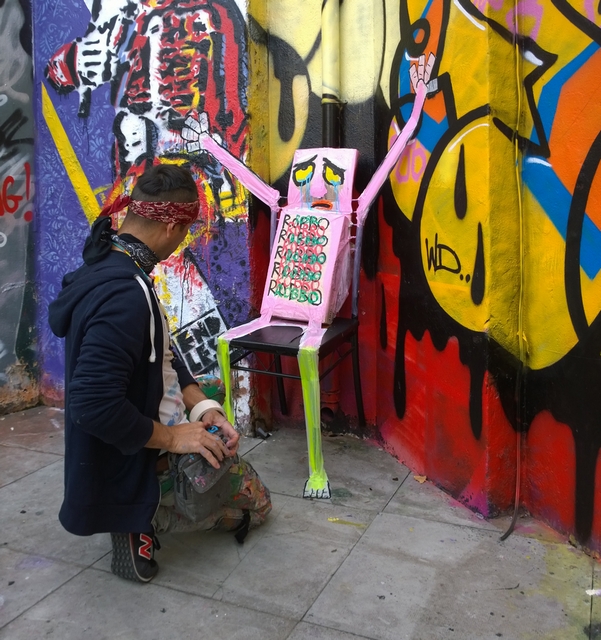 Art is Trash aka Arte es Basura in his native Spanish tongue was the most exciting and original talent to burst onto the Shoreditch stage in 2013. This super found object creation revisits one of Art Is Trash’s recurring themes, the artist vs the establishment. Look how the artist has the higher ground and a firing not arrows but roller brushes dripping colourful paint at the idiotic bumbling police. Note also the similarity in garb between the painted artist besting the authority figures and Art Is Trash’s chosen threads in the photo above, he puts himself right into the heart of his art. 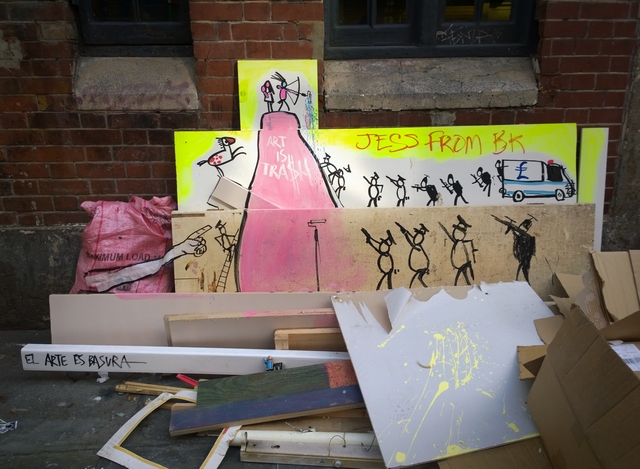 We raved about Art Is Trash when he was here in 2013, it is great to see him back in town and we look forward to an exciting and productive visit. 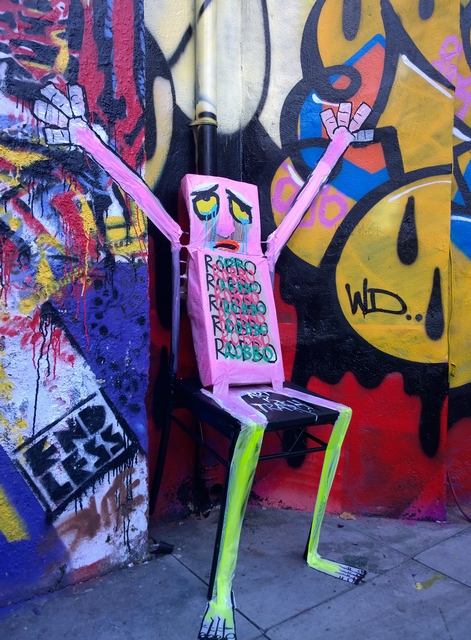