Cranio has been busy in London for the past few weeks painting a load of his characters on very visible walls across the metropolis, and a few low key not so legitimate walls but hush hush about that apparently.


If came as a surprise to hear that he had found enough time during his stay here to dive into the studio and create a dozen stunning large images on paper. They are all formed around the same basic image of one figure stage right but are all so dissimilar as to be effectively each an original. The figure is Cranio’s Amazonian Indian who is up to his usual spendthrift tricks having flogged his land rights and cultural identity for a suitcase full of dollars.


The gimmicky twist with these pictures becomes apparent when the lights go down and the pictures glow. Well, some of them.

"For sale: one size fits all"


This display brought all twelve prints together for one night only before they got packed up and despatched to their new owners. It appeared on the night that a few may still be available. One more thought, looking at the rough hewn finish of Fun Factory’s temporary home cements Fun Factory's niche in London's street art culture, kind of where Pure Evil was a while back. This manifestation of Fun Factory will be missed when it is obliged to pull down the shutters in early September when the building redevelopment starts.

Email ThisBlogThis!Share to TwitterShare to FacebookShare to Pinterest
Labels: Cranio

Art Is Trash: "Police and Horse"


When mountains of rubbish started to take on a sculpted human form in Shoreditch, Londoners fell head over heels in love with trash art.  The work of Francisco de Parjaro is literally rubbish!

He takes our rubbish, reassembles it into a cartoon figure and breaths life and personality into it.  Problem is,  there is almost no point in trying to find it the day after because what the artist Francisco has given, the bin man hath taken away.


In a recent guest post on Vandalog extolling the virtues of Art Is Trash’s street art, I wrote how wonderful it was to find a street artist working with ephemeral structures in a manner which clearly had no commercial agenda at all.  The day that was published, a show was announced so that will teach me.

Although his material is rubbish, his art is a long way from being crap.  Pajaro has done a brilliant job of bringing his street work into the gallery without diluting its impact.  About two thirds of the gallery is taken up with art and installations which connect very physically to wall, floor and ceiling and will be almost impossible to sell, they are created and installed where they are for the sake of art, the market has not been a factor in their creation.  Of course, that means about a third of the stuff is conventional selling art!

Art does battle with the twin evils of money and authority in tableau assembled on the walls around the gallery.   Pink naked artists fart over police while broken chairs become the cavalry for art in its charge against authority.

The sins of indulgence and excess spend much time in the crosshairs of Pajaro's gun.  The extravagantly modified blonde in this piece with her tummy tucks and botox lips has overdone the boob jobs to the point of explosion.

Some are just amusing and insane interactions with the fabric of the gallery, like this film projecting monster who looks like he’s about to rip out the source of power sustaining his very existence.

One or two of the canvasses would lose all meaning without the associated image painted on the wall.  One or two would take on a totally new meaning and not necessarily one you’d want to display in front of the children, you’ll have to use your imagination.

A second thread to Francisco de Pajaro’s art consists of crazy little tableau of stick figures riding horses.   In a number of cases these drawings on the streets have looked a little “top shelf” and should your mum take the vicar to see this show, there may be some blushes upon close inspection of some of the cavalry on the walls here.  The ones painted directly on the wall appear to relish letting their equine hormones run away with them but the versions paint on canvas look like sweet little exercises in nursery art.  Not my cuppa to be honest, too twee.

A motif that recurs through the show is the single white sock, mainly on the feet of coppers.  Pajaro says that this white sock was commonplace in the 80s and his mum made him wear them when he was a kid, to his disgust.  Curious thing to be haunted by!

Although Art Is Trash seemed to be at war with authority and rich people, it is possible to take away some of his art in exchange for money.   Several pictures and mirrors had their frames painted on the outside in an energetic and aggressive way, this painting in particular with its nods to Basquiat in the layers and tribal tones looked stunning, not to mention a bit tidier in its eecution than the others which tended to be too messy.

All in all this is an exciting and stimulating show with hugely energetic and colourful work on the walls from an imaginative artist/performer.  Unfortunately, like the work on the street this show has turned out to be surprisingly ephemeral so I apologise for writing this after the show closed.
Posted by NoLionsInEngland at Monday, August 26, 2013 No comments:

July had to man up to follow the excellent street art Shoreditch has seen in the past few months and boy did it deliver.  Things cannot get more manly than having Luther on the BBC swagger around in front of street art and graffiti performing miraculous feats of apparent teleporting from one spot to another in a gritty East London TV cop drama.  Among many receiving product placement name checks were the TRP crew out on the Wick, Obit and 616. 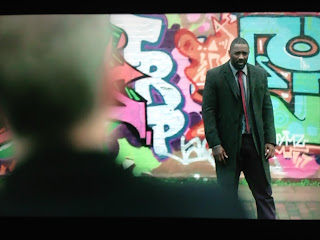 July sees a double gold medal awarded to Francisco de Pajaro aka Street Art Is Trash for both top new name to Graffoto AND top keeping it real ephemeral street art.  NoLions wrote a guest blog very recently about this exciting artist for the scene's global daily news spinner Vandalog.  No sooner did he write "no commercial agenda at all", the very next day a gallery announces a "Art Is Trash" show.  Time to despair! 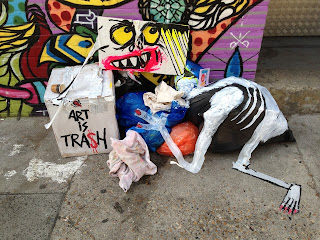 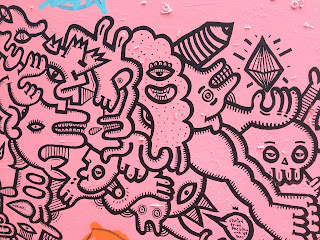 A name we don't come across often is Ian Stevenson who is responsible for the "Just Look At THis" mural. Predictably some wag with long arms edited the "HIS" part of the mural to "ITS" but it was rapidly changed back, and we chanced upon Mr Stevenson one day bouncing around behind Leonard St painting big sloppy white grins on dumpsters.

Art Is Trash v. unknown - a nice use of street furniture and modification of an existing paste up: 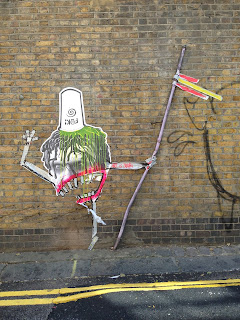 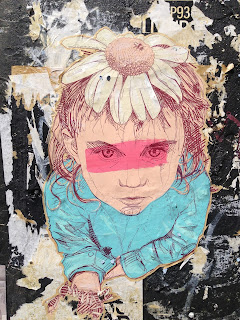 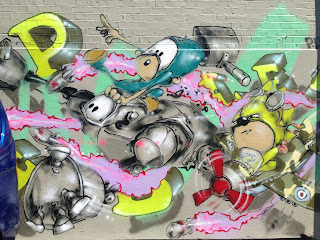 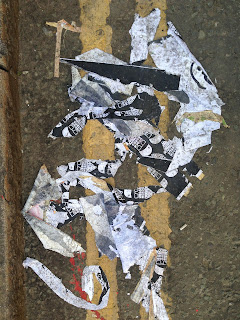 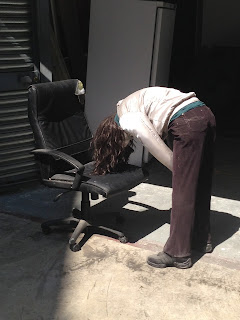 Alex Dias painstakingly painted this elephant/octopus hybrid on a permissioned wall on Hanbury St, the detail in the ink painting is incredible and it was impressive to see the background be added after the main beast was painted without painting over its edges. 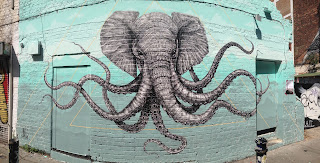 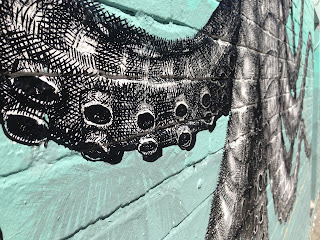 Graff writing has been making a re-appearance in Shoreditch again, here WOT has produced a burn baby burn fill over a Probs aerosol abstract wispiness 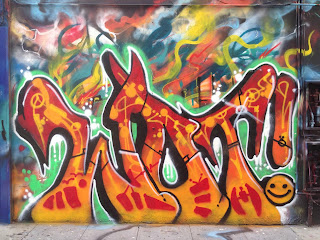 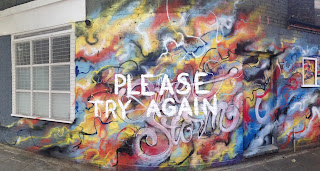 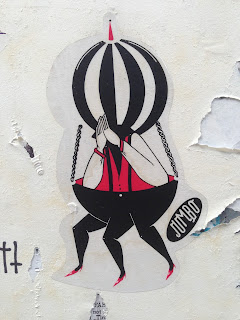 Miss Van's work is awesome and she lined up with Ciro Schu and Pure Evil to paint a burning wall in Shoredditch and because I think you lot see too much of that kind of stuff on the internet already, I'm not going to show the breasts in this mural. 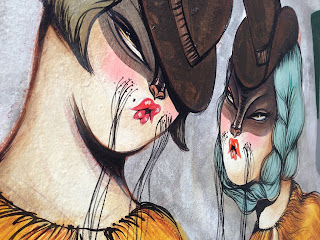 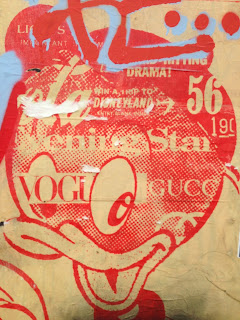 EINE - still up and it was sunny, only took me 6 months to get this shot. 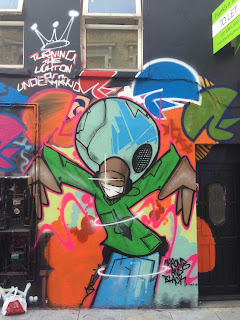 Sheryo and the Yok, New York's finest were around in connection with the "Above The Rail" show from the White Canvas Project guys, We're not sure they did anything substantial on the London streets but it was nice to catch the odd sticker or two. 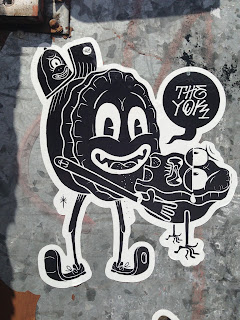 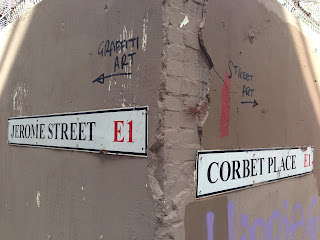 You'd have to be blind to not have seen that Shoreditch has been battered by Above stickers and luckily he completed one nice shutter before he continued his international perambulations to, errrrr, Hastings. All other shutters except the first Brick Lane one were on the coast. 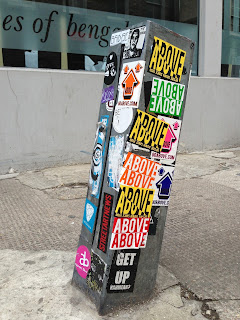 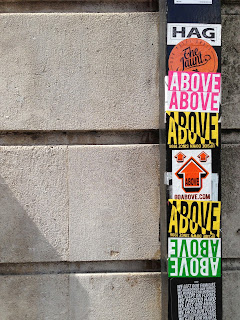 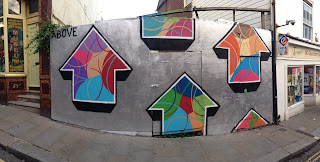 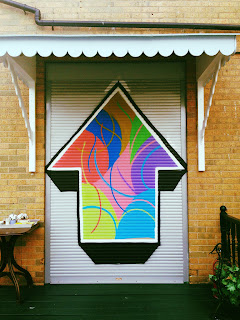 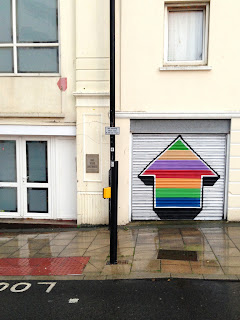 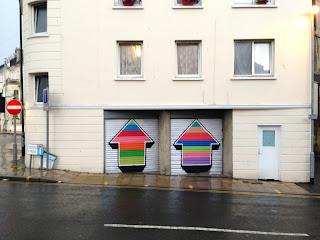