Graffoto had the pleasure of a morning with Cept as he freestyled a London shutter writing CEPT with an awesome intergalactic perspective buggering fill. Look too closely at the end result and you'll feel like you are about to fall into deep space.


Check the movie, in particular see some impressive backwards tagging at the end. Smoke a banana while you watch it.


Cosmic Interceptor from NoLionsInEngland on Vimeo.

Check here some of the awesome CEPT work Graffoto has covered in the past and as anything Cept touches may involve warping time and space, depending when you click this link we might throw in some future work too.
Posted by NoLionsInEngland at Monday, August 16, 2010 No comments:

Email ThisBlogThis!Share to TwitterShare to FacebookShare to Pinterest
Labels: Cept

98 pages (100 counting the covers?) are packed with features and photos. The cover artist ROA has screenprinted a unique image on 100 copies, his first ever screenprint whilst apparently the first 20 to storm the evil dungeon may get their mitts on a very special ROA VNA teeshirt.

Amidst the launch buzz there will be a load of ROA art on the walls, featured artist and Brizzle legend Mr Jago is painting live whilst adhoc low-fi scuzz rock groovers Pure Evil and The Prehistoric Man will be serenading all in the basement, check out “I can See Your Bra Through Your Top” here. The B-Side “I Can See Your Y-fronts Through Your Monitor” hasn’t been cleared for release. Refreshments by Kopparberg,

As a bonus, it very easy to walk the 50 yards to see the Rooftop Roa painted specially for VNA as a series of various vivisectionist states of internal dis-memberment. 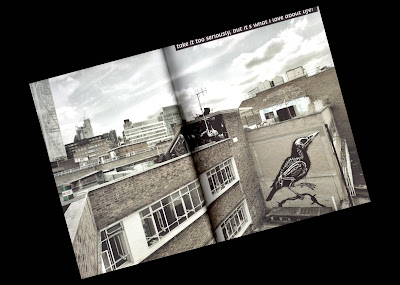 Back to the mag, it just gets fatter and brighter, like some of its photographers. The emphasis is shifting towards artist interviews and photos with the photo-journal of street art and graff since the last issue confined to 4 double page spreads at the back. Booooo. In depth interviews and photologs include feature interviews with Bruno 9Li, Dave Kinsey, M-City, Kevin Cyr (paints tagged vans), The Yok, Mr Jago , Buff Monster and an Amsterdam OMT including an beer and chat with exactly 50% of The London Police, plus of course the Roa interview already mentioned 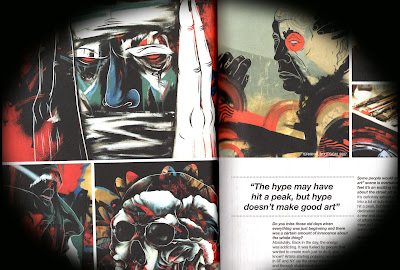 If like Graffoto you prefer an album cover you can hold in your hands rather than an email confirmation that you paypalled 79p to iTunes, then make a copy of this lush little record of that most ephemeral of art forms yours.

If you can’t make the opening this Thursday, check out one of the many UK and international stockists (curious that in London there is no stockist North of Oxford St or west of Whitehall, where the PM and his Mrs are elbow deep into street art and graff culture nowadays). If all else fails, check out the shop on the VNA website.

Thanks to VNA and google, Graffoto may be busy for the next few weeks getting to know the Visiting Nurse Association. 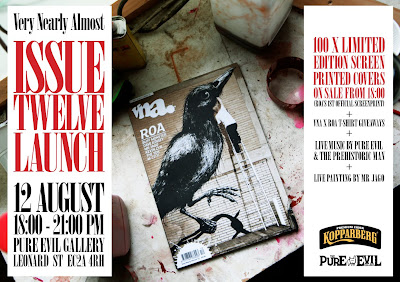 Hackney Wick is bohemian, decaying, swampy and trendy though a lot of its post industrial bleakness is being surrendered to the concrete sports temples rising out of the mud and mire. Some of the resilient local artist community, 670 or so the promotional bumpf proclaims like some kind of statistical triumph, have had their doors levered open for the annual Hackney Wicked art festival now in its third year.


One of the coolest bits of work was an outdoor-internal installation called Tompson’s Tunnel, featuring miniature concrete steps leading up to a tunnel burrowing into the building with tiny Slinkachu-esque naked figures striding the landscape. The figures looked like they may have been wrapped in foil then lost their skin to first degree burns in some grotesque bbq related accident. The illusion of depth in the tunnel was enhanced by a mirror fitted at the end. Bugger to photograph mind. 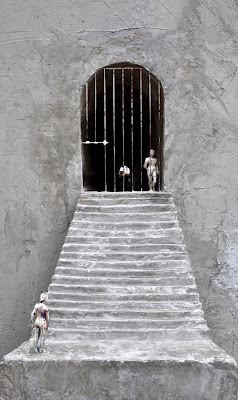 
Quite a bit of live painting had taken place the day before in and around that White Post Lane car park including pieces Snoe, Cept, Seks, DScreet, Busk and Xenz. 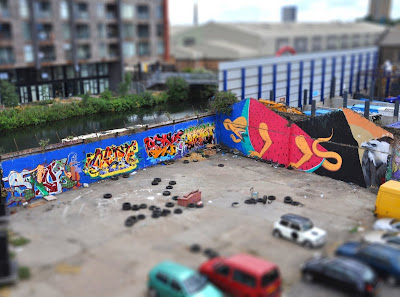 
Also in that same car park, intertwined down the structure of the back staircase is one of those robot wooden arms similar to the ones seen at Prescription Art in Brighton last year. 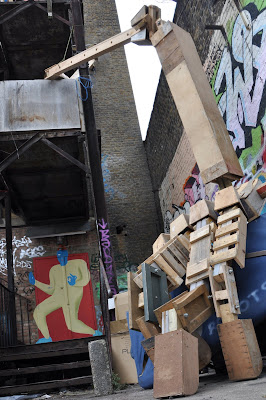 Normally you wouldn’t have polite access to these sweatshop buildings, various handwritten notices pleading for the return of missing items or threatening dire retribution if perpetrators of theft are caught indicate why. The best part of these buildings being open is the opportunity afforded for access to roof spaces and elevated windows, yielding panoramic views and close up shots of rooftop graffiti gems. 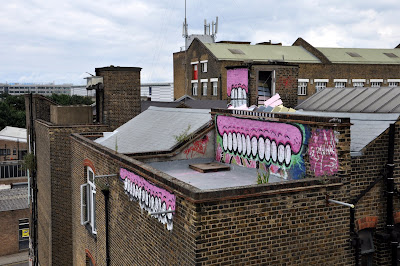 
Arriving early like around mid-day, when stalls selling home-made carrot cake out-number carrot cake eaters, had the dual peril of artists still being tucked up in bed and if they were there, you were likely to be the only rubber necker keeping the artist company. You hope as you mooch un-certainly into the heart of the studio that your face doesn’t betray any particular look of horror.

On a hunch that he might have finally surfaced by 2.30pm, a return to the Peanut Factory found Joseph Loughborough aka illjoseph, bright eyed and demon breathed after a bit of a session the previous night. 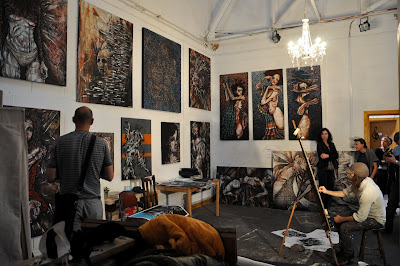 
Joe has been an artist I have admired for several years and the work on his studio walls was just stunning. Some of them are on his flickr account and without being critical of Joe's photography, flicks don't have a fraction of the impact of seeing these fo' real. Joe was sitting there producing one of his latest series of frenzied, fragmented and smudged charcoal portraits. For me this brief visit was the highlight and made the Eastwards schlep worthwhile (and the bit about demon breath probably isn't true). 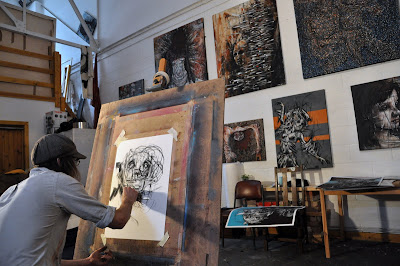 
In, around and beyond Hackney Wicked photographs 'ere
Posted by NoLionsInEngland at Sunday, August 01, 2010 3 comments: