Some of the new bits and pieces this month. . .

Special mention must go to Alo, hitting up so many locations this month and last I've officially lost count.

Quite a few new faces to the streets too, but plenty of habitual Hackney hitters returning after a while away. 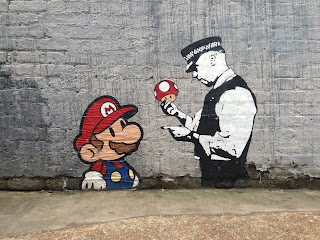 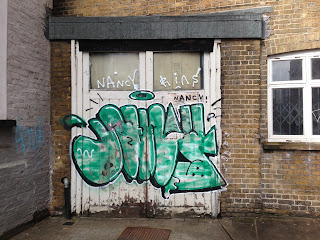 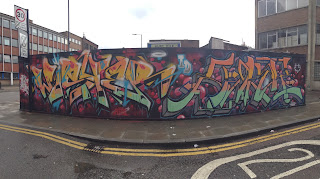 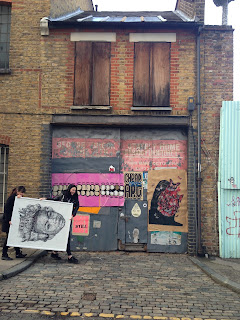 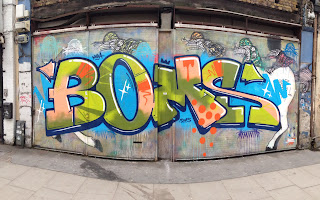 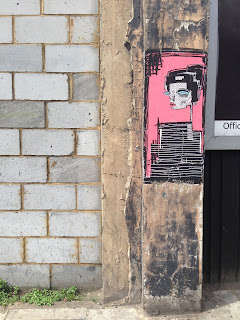 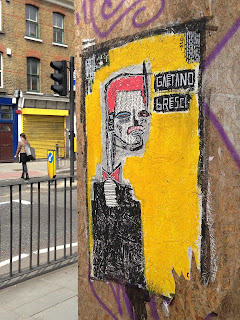 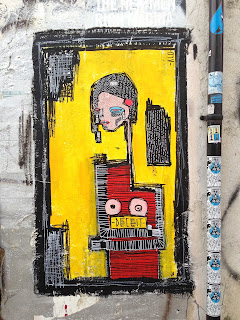 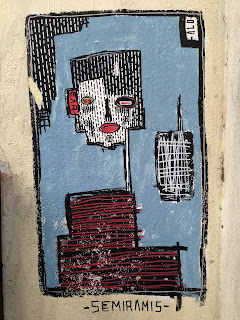 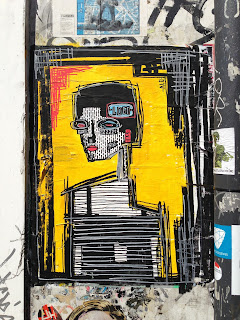 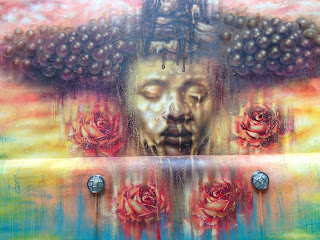 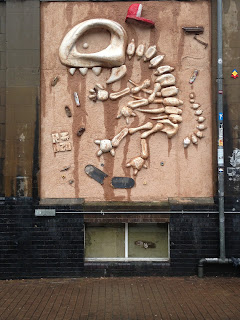 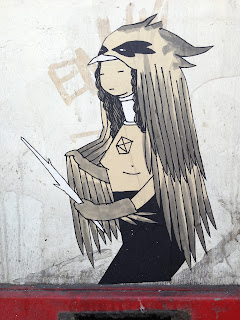 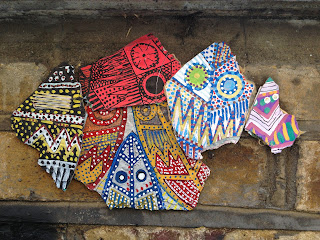 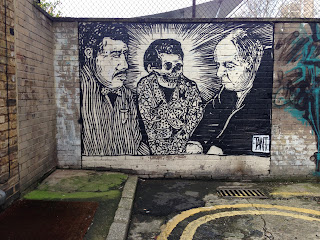 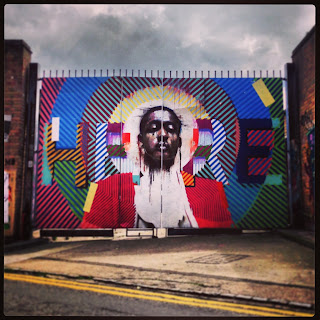 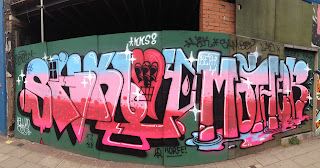 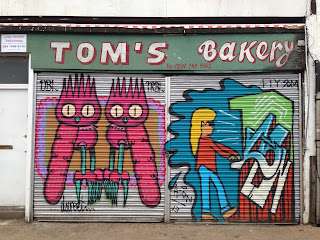 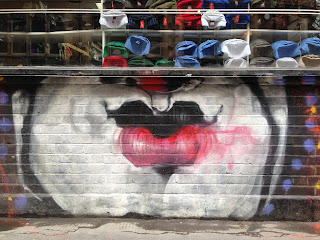 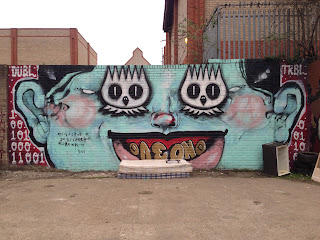 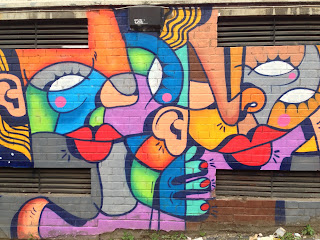 Not making any promises that this will become a regular feature but....here are some musings on and pics of street art and graffiti which happened to catch our eye around London recently.

Sweet Toof and Insect knocked up some gorgeous paste ups and papered a broad swath of London’s East End. Choosing photogenically distressed spots to get up, Sweet Toof went for a slightly less lurid pink version of his characteristic gums whilst Insect churned out a range of floppy eared mouse characters with colourful highlights, a reprise of a Hendrix zombie and a barcode coffin wake.

OBIT is on a roll and you can find his stickers and paste ups all over London but in the past week he took on the shutters on a well known bric-a-brac den on Brick Lane, his subject matter reflecting the three organs which come to most harm in Graffoto's obsession with the wondrous beauty of street art (and lavish art openings with free beer).


What was interesting to see was KGS getting the crew name high and loud in this street art central location, more power to them. In a world gone mural-loco with several organisations competing to pass permission slips into the hand of any visiting artist who is willing to play the mutual promotion painting game, illegal street art has really been marginalised over the past 18 months. Good to see people willing to grow a pair and get up high and illegal along this mural mile. Compare the above shot with the same spot just a few days earlier, noting by comparison KGS’s comedy modification of the Obey at the far end.


ACE’s London centric paste-ups have been a firm favourite with Graffoto for many years and despite hectic preps for a recent solo show in LA, ACE managed to add many prime specimens of his mashed up beauty to walls around London

Graffoto first came across Italian ALO one cold evening just over 2 years ago as he put up a few modest paste ups on his first outing to hit the streets of London. While his the energy of his vibrantly coloured portrait imagery was evident even on first sighting, he has recently been finding quiet spots to paint and paste in situ on larger scale to beguiling effect. This particular shot captures the chance moments that crop up as a photographer; with my non viewfinder eye open I could see this girl approaching and thought she’d add interest to the shot but I never imagined her lips, teeth and particularly the grey hat would so magically mirror ALO’s portrait, a lucky bonus. With slogans such as “Deceit”, “Loser” and “Frustration” juxtaposed with his female figures, we wonder if the young, male, Italian artist is allowing some biographical detail to influence his imagery.

We’re not sure if Kate hangs out in the East End but, avoiding the obvious gag with the juxtaposition of the two paste ups here, we like to think that our favourite screen printer Aida is reflecting on the post Olympics legacy with her modified message here.

Dee One has kept up a high output, I particularly liked this mashed up portrait of Cameron with Dee Devils for brains.


The telephone boxes in the shot above started appearing in London late last year. Iconic females including Liz Taylor, Princess Diana, Audrey Hepburn, Barbara Windsor, Sam Fox and errr, Rhianna amongst others are trapped within pop art multiple telephone box paste ups (and the occasional tardis) that look lush on the street. The guy has his mojo and is rocking it hard. Collabs with street artists such as Gee Street Art and 616 seem to be his latest twist not to mention an increase in size as can be seen in the earlier shot of the Brick lane bric-a-brac cabin.


Mentioning Gee Street Art, he/they have been among the hardest working street artists over the past winter. At the moment he is mostly making his mark with paste-ups though this multilayered stencil with its free hand reflection is just the way street art should be. He has also put on a street art show out in the provinces which opened this week, sadly we couldn’t make it.

616 doesn’t seem happy unless he has at least 1 new idea each week and recently it was a delight to find him putting up small captioned Polaroid collages, you don’t need permission and a 30 by 8 foot shutter to make an impact round here.

Last year the only 3 warm weeks we had outside the Olympic period were reserved for Jo Peel’s Holywell Lane stop motion mural. This year inside the Foundry Car Park she had to endure 3 weeks of finger freezing weather, hats off to anyone prepared to work outdoors high and hold cold cans for that length of time. We look forward to seeing the resulting stop motion this year, assuming camera operators’ shivers didn’t blur the photos.

Yesterday Graffoto had the pleasure of a couple of hours in the company of master snapper Art Of TheState. His un-erring eye sniffed out a couple of C215’s whose location we weren’t aware of, these are a couple of months old. Isn’t the year flying by.

This final flick is a piece found yesterday, no idea how old it is or who the creative genius was but it made us chuckle.

To those hardly souls undeterred by the brass monkey weather of the past few weeks, whose un-curated art has added beauty to London streets, we salute you!


Posted by NoLionsInEngland at Saturday, April 06, 2013 No comments: