Further to last weeks premature death of the Brick Lane hall of fame that had started and allowed to continue after the Meeting of Styles event this year, word has reached the Graffoto news desk of underhanded tatctics by Hackney Council in trying to bully shopkeepers into having graffiti cleaned from their shutters. 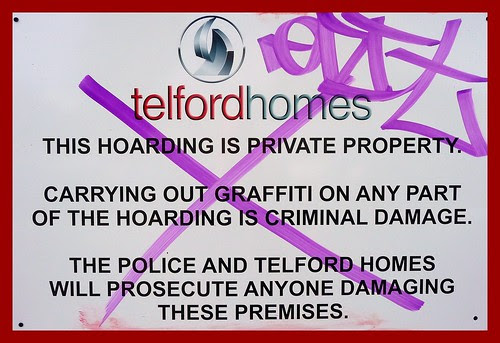 A Shoreditch shop owner has this week received a letter from the council stating, with somewhat imposed authority that "he must paint his shutter within 14 days of this notice, or legal proceedings will begin" - thankfully he told them to take a long walk off a short plank and is standing his ground, but how many others have received the letter and will believe it to be official, and just paint the shutters out as quickly as posssible? Hopefully not many. 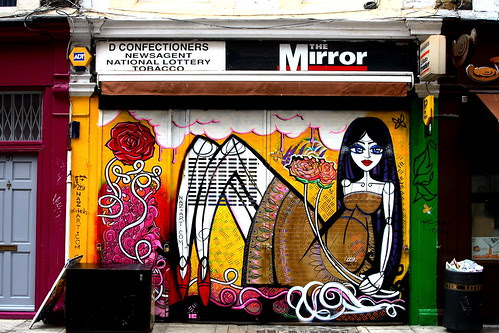 Whilst it isn't believed that the two are connected - being that Brick Lane falls under Tower Hamlets Council, who to date have been slightly more leanient and forward thinking in their approach to graff and street art (they surveyed local residents and business owners as to whether the art should be allowed to stay) It does leave a bitter taste in the mouth that councils, or housing corporations feel that they can bully people into submission and somehow agree with their small minded belief that buffing these walls and shutters actually makes the place any better.

A word from Bristol graff artists is what's needed here (after the council buffed a LEGAL WALL): 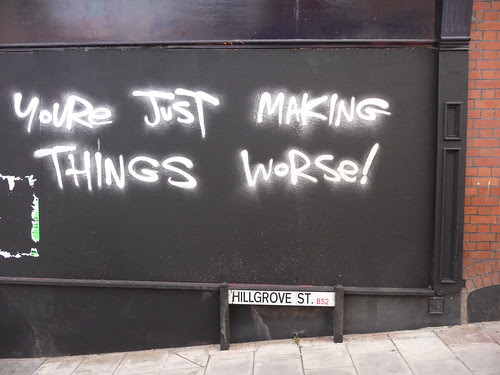 photos: Romanywg and Nolionsinengland where stated

Banksy appears to be getting the limitations of a formal show out of his system by going back to decorating street walls. First the M40 Bandit appeared a couple of weeks ago and is generally accepted to be Banksy although no "official" confirmation has been made. 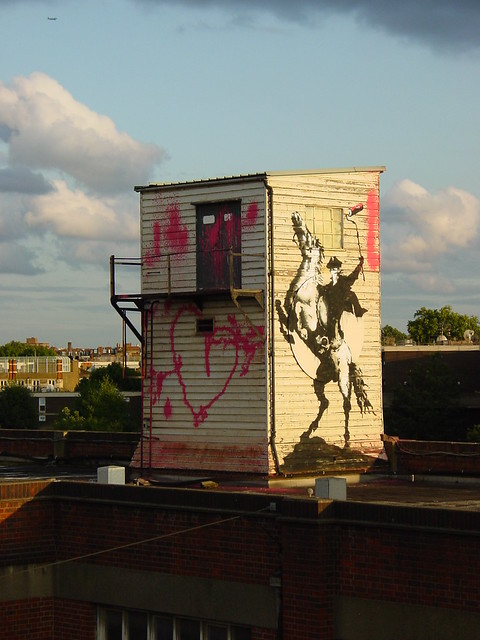 
Now, a very nice stencil has surfaced in Croydon and thanks are due to our friend Romanywg for this pic, there's nothing beats going out on a graff hunt and Mr R spent over two hours and made two trips down to Croydon before finding the right wall. 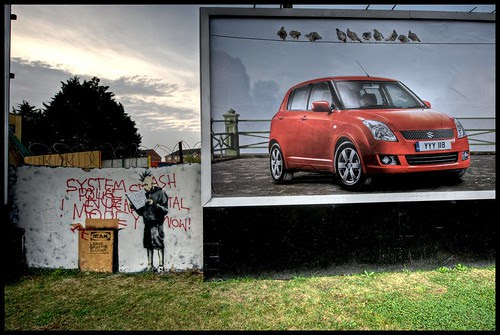 
Stylistically this looks like classic banksy and we've seen versions of the anarchist punk before in "Don't Forget Your Scarf Dear" from the Bristol show. 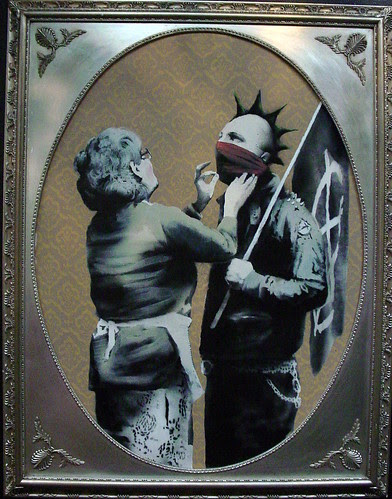 
Banksy is noted more than most for his placement and use of the environment, it’s hard to see the full context from the pic here but apparently it is close to the Croydon shop-in-a-barn-on-the-outskirts IKEA. With a nod to someone off a forum for the research, apparently IKEA in Canada jumped on the guerrilla marketing bandwagon and hired an agency to go out and spray un-authorised advertising on walls using, errrrrrrrrrr, “chalk paint”. So Banksy hits two birds with one stone in this piece – convenience weekend anarchists and the appropriation of street cool by mega multi-national corporate. 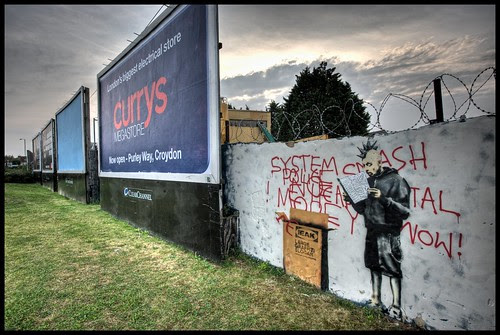 
No obvious explanation for the “IEAK” spelling, Graffoto certainly doesn’t subscribe to the theory that Banksy is afraid of breaching trademarks. I’d like to think Banksy has suffered the living hell that is Ikea’s Returns Desk and this is his jest at how often IKEA stuff is defective. 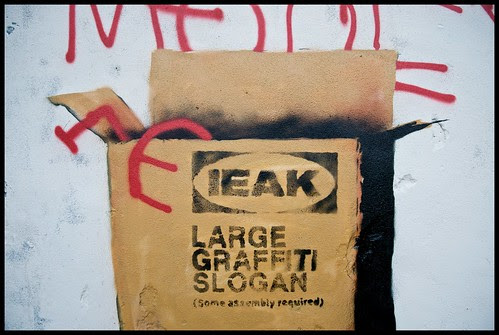 
Some have said this lacks the sense of "Banksy spectacular" but Banksy is fundamentally a street cartoonist and this is up to his usual standards. If spectacular means CCTV Nation or the Pollard St line painter then give me these illegal (guessing) ones any day.

As an aside, K-Guy also had a pop at the homogenisation and corporatisation of art as flogged by Ikea, described here.

And just in case you hadn't heard, Banksy did a popular show in Bristol this Summer, the Graffoto review is here and the Graffoto guide, which like everything else in Graffoto is of immense historical importance but actually bugger all use today, is here.
Posted by NoLionsInEngland at Sunday, September 20, 2009 No comments: 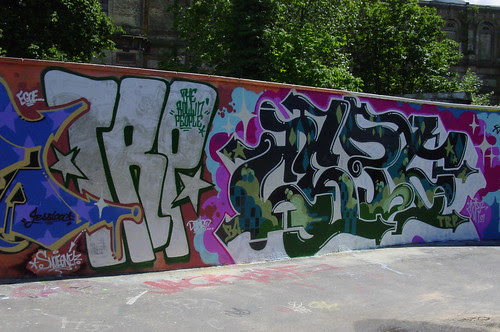 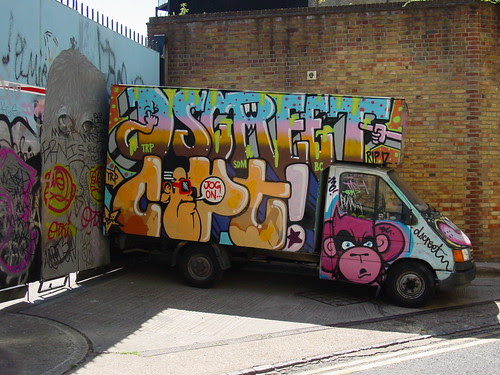 
So, a few months on here we are at Cept’s second solo show of 2009 and third in less than 12 months, marking the opening of new gallery The Writers' Bench, housed within the Sartorial Art gallery space in Kings Cross and curated by TEK33, BC. Although the proverbial cat would come to grievous gyratory-inflicted harm in this tight basement space, Cept has managed to cram in loads of canvasses, a couple of wall murals, a floor painting and a split screen TV looped audio visual multi media experience.

The key painting to grasping the threads of inter-galactic supreme beings, mind control, superheroes, and deviants in the machine is a single oil painting of a mutant galactic being formed of the cosmos or perhaps forming the cosmos. Creator or created of? There is a knowing nod to the iconography of Ganesha in the way the gas mask tubing comes to resemble and elephant trunk. 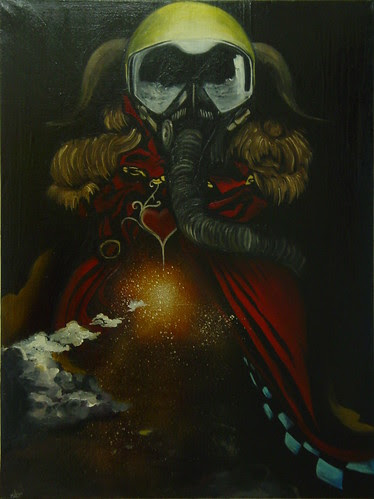 
Somewhat curiously this image stands out for being stylistically as well as physically quite a distance from the rest of the show.

This galactic omniprescence sends messages to the minds of the sentient beings inhabiting the universe, strong black and white perspective lines link this source to the messages, presented in the form of tightly grouped words and messages on canvasses, “Not Everyone Thinks Like You”, “Bad Meaning Good”, “Art but Casual” - throw-away, individually meaningless but all quite sinister looked at from the conspiracy theorist’s point of view. 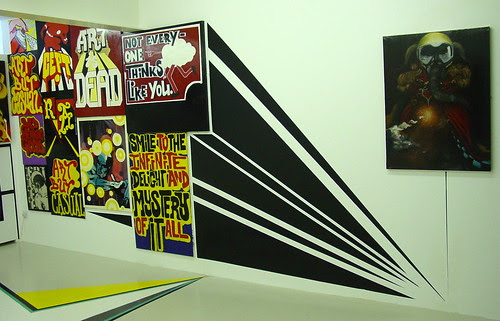 Under the stairs leading down to the basement is an audio-visual installation, a split screen presents on one side an excerpt from George Lucas’ first film THX-1138, a state controlled production line worker receiving electronic re-calibration and indoctrination after attempting to subvert the central control, his eyes rolling up in their sockets, while on the right is a visual white noise where subliminal CEPT words appear from time to time. The terse American voice issuing instructions and commands provides the soundtrack for the installation and recalls the audio backing to the illusion room at the 2007 Cept v. Mike Ballard show in Dalston (reviewed here). 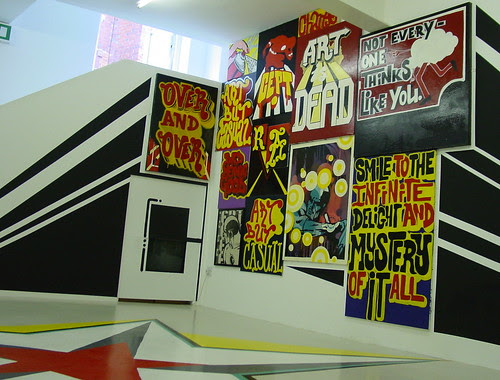 
The TV loops then throws the idea of indoctrinating the rebel back across the room to the Supervillain on the wall opposite, his eyeless face reflecting the rolled back eyes of THX-1138 as Supervillain is also subjected to mind control messages from the galaxy creator. 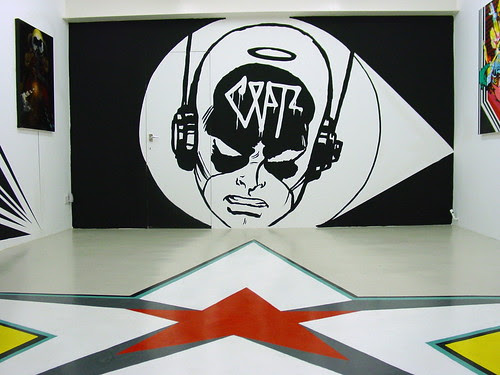 
The forth wall shows a couple of the Explosion oils which haven’t been seen in London before (read the review of Galaxy Rays– the Bristol 2009 show here) and a bit of wild and funky larking around the letter C. 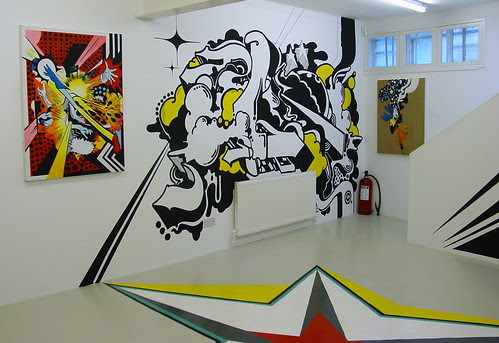 If the galaxy creator/controller is to blame for 90% of us, then Cept has found a strong and consistent technique for releasing for his own unique 10 per cent. Like his last 2 shows, “Cept – A Frozen Explosion” very strong on concept, coherently linked the various strands across the work and not least, the artwork itself retains the rich and glossy pop feel.

More photos of the show, including the individual canvasses can be seen here, and you now have permission to leave this page and experience Graffoto's take on Cept's Dalston show from last year and Cept's Galaxy Rays show in Bristol from Spring 2009.
Posted by NoLionsInEngland at Saturday, September 05, 2009 1 comment: