In honour of the Brothers and Sisters of the Royal Mail on strike today. . .collected in a skanky pub in Hoxton via usage of a secret password : 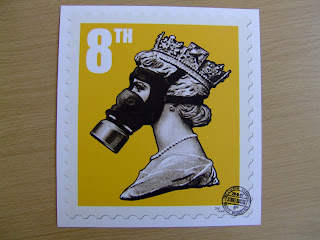 http://www.cnpdonline.com/
Any unsold by 5pm will be destroyed on site.
Posted by HowAboutNo at Friday, June 29, 2007 No comments:

Two brilliant print releases today, both of which I want, neither of which my pockets has money to cover :o( 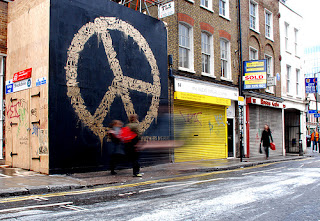 This got painted over pretty much the day after it went up, as the ad agency next door represented some of the people dissed on it. Spineless really, not like they got up and did it themselves!

Anyway, it's been turned into a print called "What Wars are For". . . and it seems like nowadays wars exist as good fodder for street artists with a touch of writers block. To be honest it is getting a bit old hat, but I guess its pretty much been the case anyway, and some great images do crop up now and again that stick out from the dross . . . this is definitely one of them! 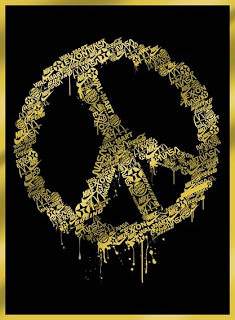 An edition of 75, priced at £150 each, and quite marvelously they are only available if collected in person at the StolenSpace group opening show tonight, hopefully meaning only true fans (or die hard scalpers) should get their mitts on it. In fact, who am I kidding. Expect at least 30% of these puppies on Ebay in the next few days at silly mark up's!

And then a complete surprise to me, Eine has obviously been busy in the studio as well as on walls as of late, a completely new letter style from him, made into two lush new prints. Whilst you may look on screen and think "hmmmpffh, what a load of pants" Eine's screen prints are a the nicest hand finished piece of gloriousness I have witnessed. Truly have to be seen to be believed.

Just not sure about the dodgy title!

Elton - Black and White, x 150 of each colour, all signed and numbered by the artist. £150 each.
http://www.picturesonwalls.com/
And it will be the best £150 you can ever spend on a screen print, trust me!
Posted by HowAboutNo at Thursday, June 28, 2007 No comments:

One of my all time fave street artist's since day one (and subliminally from many years previous.... that makes no sense. Maybe I'll explain later if anyone is bothered) is Eine. Big thanks mainly have to go to Shellshock Photos - http://www.shellshockphotos.co.uk/ - one and only Mr Martin Bull, for making me aware the bloke actually did screen prints via some dodgy forum. The best £35 quid I ever did spend!

Anyway, it's getting warmer (between the piss poor rain) which means the big boys get out of bed before 4pm most days now, and actually bother to paint stuff on walls like they used to before becoming "artists". Guess that's why I have always loved Eine's stuff, strips the bullshit and just gets straight in your face.

Now, the "Big" news for most is that Eine has just finished probably his biggest (don't quote me here folks) street piece ever just this weekend. Entitled "Vandalism" (just a wild guess) It is truly stunning, and will no doubt feature here in all its changing guises over the coming months/years/when we all vanish from this mortal coil, whichever comes first.

Excuse the poor stitching peeps, I promise to improve!

But what literally just made me wet my pants (no, seriously) was when I just uploaded these pics taken almost a year apart to the day. I thought I already had this Eine shutter in the bag, but today was less sunny than before so it was a good time to get a better shot (I'm sad A LOT like that, you'll see) 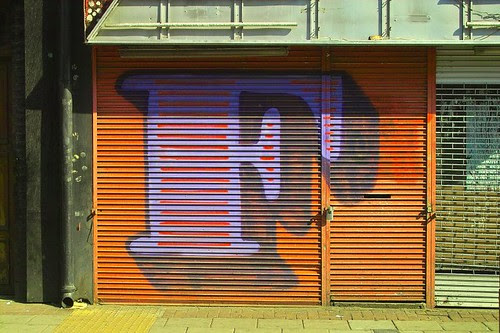 And Then here it is again today : 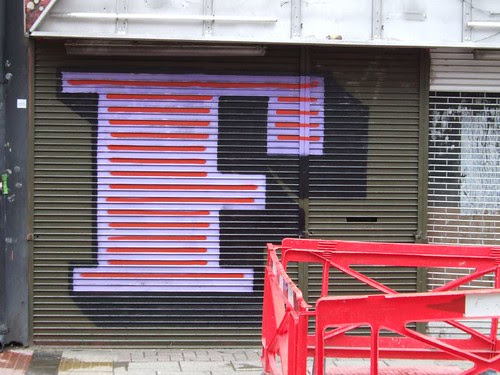 So at least he is going back over his old stuff and keeping it fresh, whilst also doing loads of new bits in between. Which keeps saddo's like me happy and away from any windows looking to be licked. :o)
Posted by HowAboutNo at Monday, June 25, 2007 No comments:

Email ThisBlogThis!Share to TwitterShare to FacebookShare to Pinterest
Labels: Eine

Well, it's a bloody good question to be honest. The world and his mother seem to have a street art / random happenings blog, so what's the harm in one more I say, Tally Ho!

Besides, this one will no doubt be a complete load of utter codswallop and wont actually waste a whole lot of your time anyways :o)

Now to get my thinking cap on to see what I can actually bore you lot (all 2 of you!) with. . . . . Lets start with this splendid piece in Brighton by Tinho, Pato and Flip, who are currently in town promoting Brazilian urban art with a show at the Ocontemporary Gallery.

The Brazilian scene is regarded by most as the hottest on the scene at them moment. And after seeing them in action I cannot disagree! 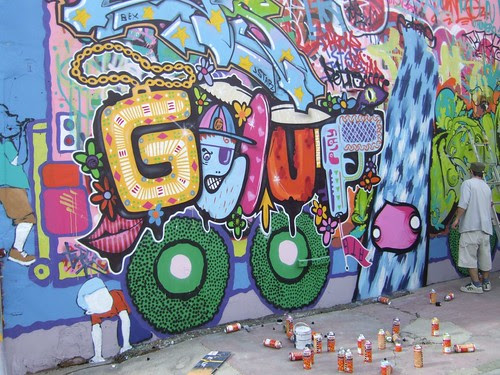 6 exclusive new prints and a huge hoard of originals for the flighty amongst you available now from: http://www.ocontemporary.com/
Posted by HowAboutNo at Monday, June 25, 2007 No comments: