You can take the kid off the street but you shouldn’t take the street out of the Kid. Sheffield’s renaissance man Kid Acne covers the graffiti, gallery artist, music producer and DJ hipness angles and has staged his first London solo show in London at Stella Dore.
Kid Acne occasionally illuminates walls of London with colourful masked cat-girls, showing great effect from an economic cartoon style. 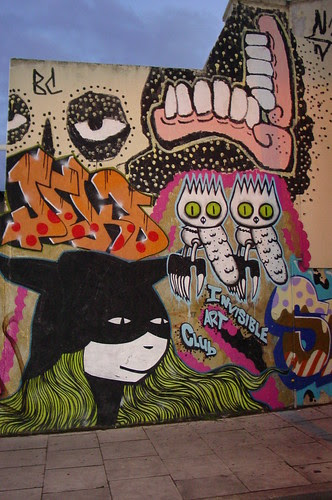 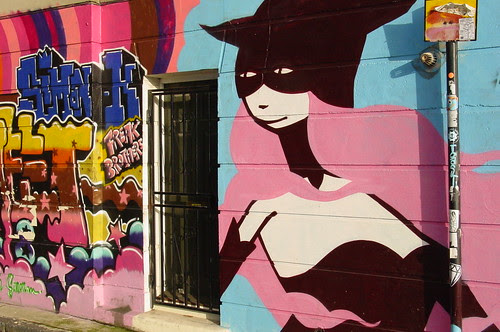 Towards the tail end of 2008 Kid Acne introduced a 1 foot tall army of Bouddica-like women pasted around the footings of many London walls and pillars, All the women had warrior like garb, occasional lavish fur stoles, a few injuries and each carried a sword. It was clear they were by Kid Acne but not exactly clear what these women were about. 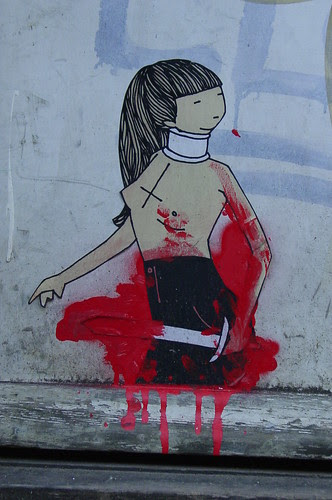 Kid Acne’s first London solo show opened at Stella Dore gallery, so achingly hip it even has paps staking out the Eine-painted front door. Street Artists are under pressure these days to have a few more tricks up their Kangol sleeves than just a few stencils on canvas and, luckily, Kid Acne has mounted three light boxes just inside the door. Why lucky? Well as soon as the gallery doors admit the first few rubber-neckers a machine hic-ups quantities of dry ice Spinal Tap would be embarrassed by, the diffused glow from the light-boxes casts a lighthouse beam guiding Shoreditch’s cool and thirsty to the buckets of beer.

The lightboxes have a collection of black images which at first glance seem to reference some runic iconography or Eygyptian hieroglyphics. Close inspection reveals a more intriguing set of truths. 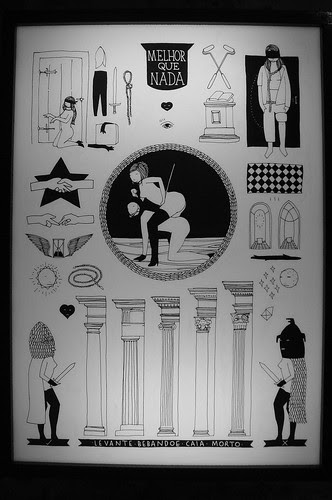 Melhor Que Nada (Better Than Nothing)


A semi-naked women in suspenders with a crop pony-rides another semi-naked women with a halter in her mouth. Architectural columns and details, garden tools, blindfolds, strange garb, strange handshakes, symbols of squares and triangles, detecting a pattern?

What are the women up to? Well apart from the aforementioned sexual shenanigans which hopefully you have ceased drooling over, there are women gathered around a table arms raised, arms linked, clearly joined together in some kind of secret society, a coven of women involved in a séance it seems, communicating with the dead and raising their sisters out of their graves. The strange garb, one trouser-leg rolled up, the strange symbols, a builder’s square and compass, illustrations of hands joined together, suddenly blatantly obvious Freemasonry references abound. Those columns, they’re the five orders of architecture, five different forms of pillar and pillars are central symbols in the freemason’s cult. 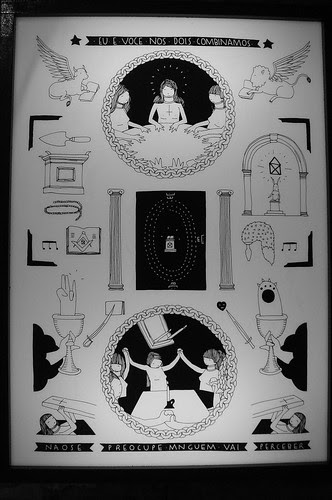 
The checkered grid below the blindfold woman with the hangman’s noose round her neck, that’s the mosaic pavement said to be the floor of Solomon’s temple, alluding to cardinal virtues and the kind care of providence. (Ain’t google great). The Freemasonary link sends us back to re-assess the ritual content in the lightboxes, ritualism and secrecy are key features of a Freemason’s gathering and the twisted construct Kid Acne creates here is that the rituals are being conducted by women. A Freemason’s lodge is generally a male enclave, so perhaps the women are taking the men on at their own game. 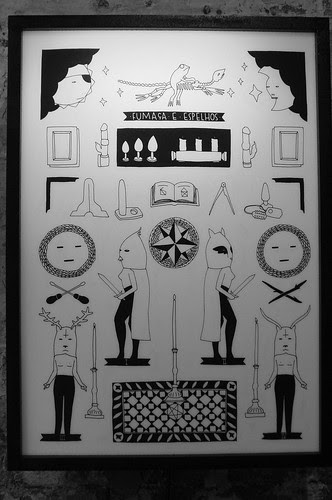 Diagrams
One or two of the details are actually more appropriate to an Ann Summer’s catalogue than the Freemason’s guide to symbolism. These toys may bring a smile to a maiden’s visage and present a message to the male of the species warning that he can be replaced. 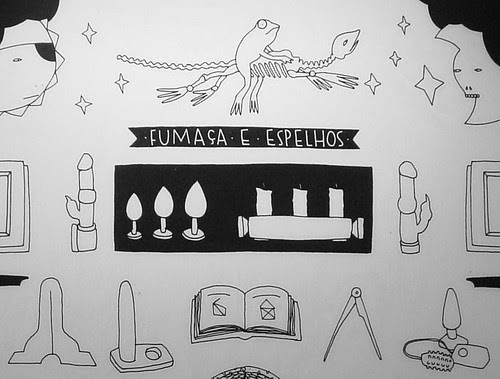 Diagrams - Detail
The revelation of the un-expected themes fires our curiosity, feeling our way around the edges of the gallery through the clinging fog, now imbued with a much more sinister overtones, fingers tip-tap and fumble across a set of eight wooden etched Ouija boards. One or two of the boards feature Kid Acne trademark Warrior Women and the set sustains the theme of ritualism developed in the lightboxes. 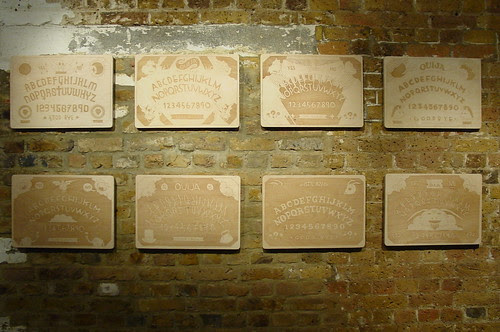 Ouija boards
Ouija board of course have critics from across all religious and scientific communities concerned about occultish communication with demons and there are calls for warnings of the strong likelihood that your best mates may be revealed to be complete shits out to spook you by pushing the glass around. 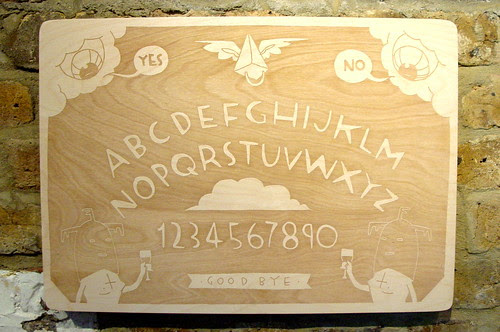 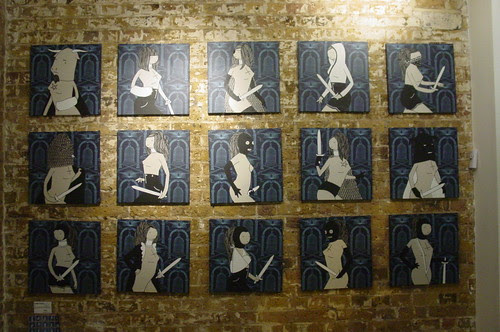 Stabby Women
The Stabby Women clearly have a mission, possibly they are engaged in a quest or a hunt, or are on the defensive but the images lack a narrative that really tells us what they’re actually up to. The intelligence gained from the mixed images on the lightboxes may suggest their enemy is the male of the species, but faced with a Stabby Women on her own, probably when she’s at her most dangerous, there is only guess-work and you know how deficient in the intuition department men are. 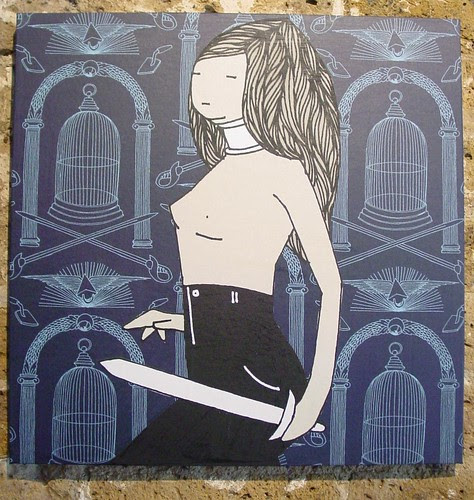 
The show print is a two colour edition of 25 screenprint in a choice of green or copper colours. 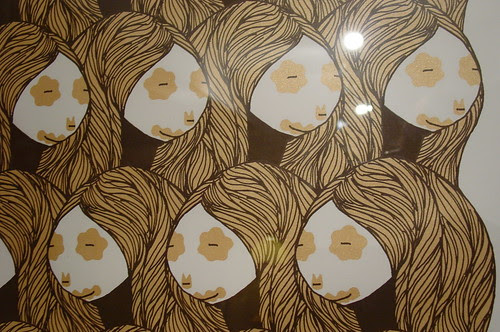 
Our bare-topped bandana’d Stabby Woman heroines get their moment in the sunlight in a pair of 4 colour screen prints produced by Choque Cultural of San Paulo, possibly explaining the Portuguese titles. 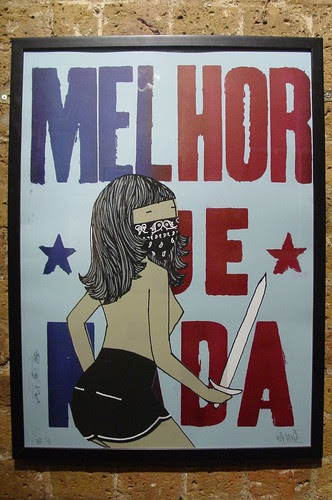 
A freestanding cutout masked girl, semi crouched on the floor emphasises the close links of Kid Acne’s style to pop art, in fact it is very hard to see the simple stark characterisation of the female’s distinguishing characteristics without Julian Opie springing to mind.

So there we have Kid Acne’s art. Very easy on the eye, the pop art stylisms are pleasing to behold, but underlying the images are themes of cultism, deception, secret societies, female ascendancy, ritualism and the occult. If only the story of the Stabby Women wasn’t so frustratingly incomplete. 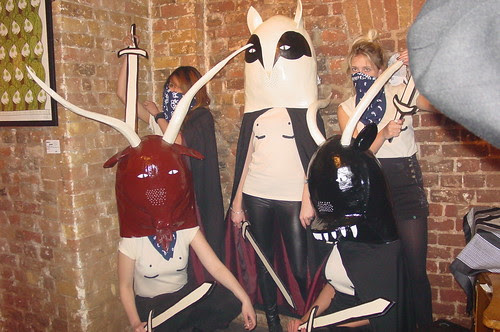