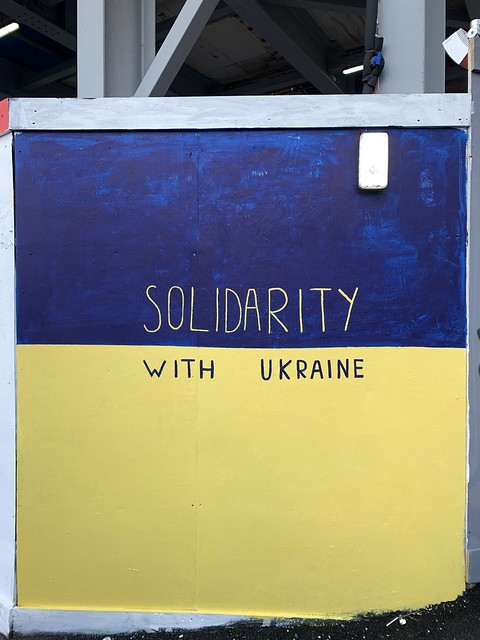 Three days ago Russia invaded Ukraine.  Street artists in Shoreditch have united with the rest of the world in putting out street art with messages of solidarity with Ukraine and revulsion at war breaking out on the European continent.

This afternoon (Sunday 27th February, 2022) these pro Ukraine messages were seen in Shoreditch, shown dovetailed with photographs from protests outside Downing Street in Whitehall, London yesterday. 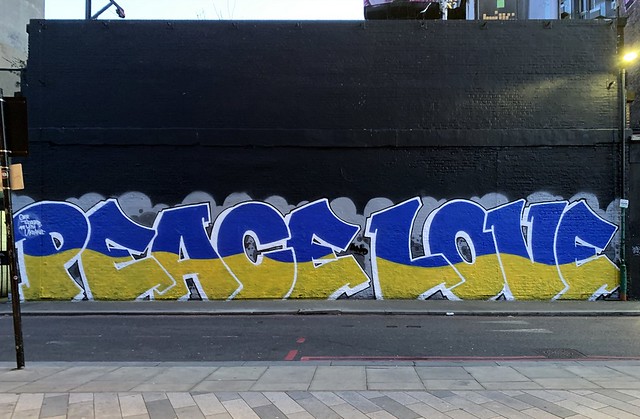 Peace and Love, our thoughts are with Ukraine 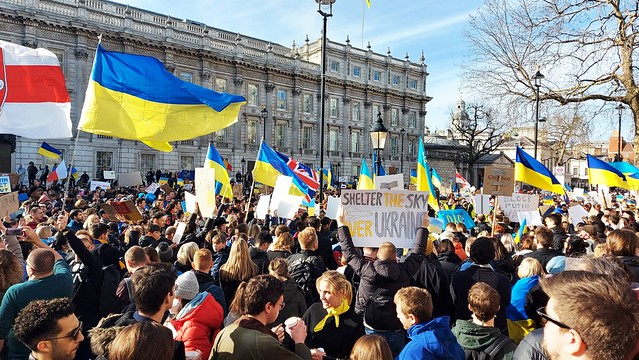 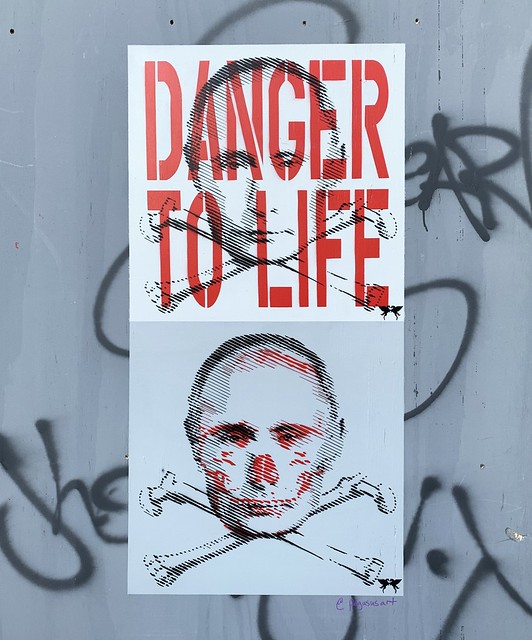 Putin Danger To Life, by Pegasus 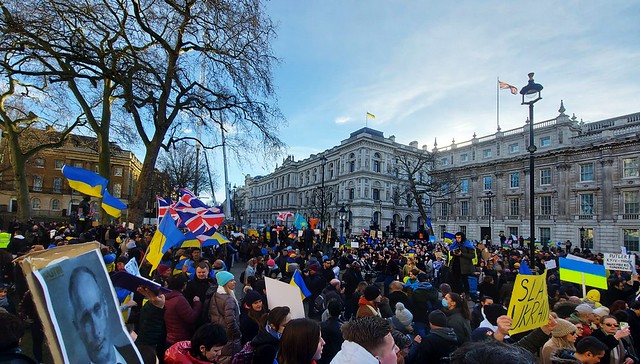 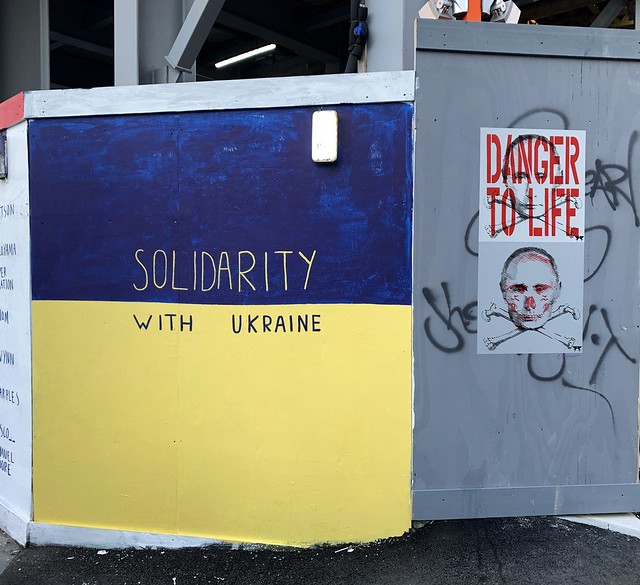 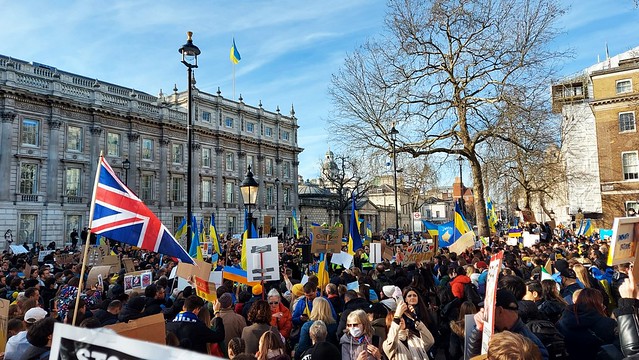 Solidarity with Ukraine in Whitehall


Street artists not known except Pegasus where stated

Whhitehall protest photos by anonymous contributor with thanks
Posted by NoLionsInEngland at Monday, February 28, 2022 1 comment: 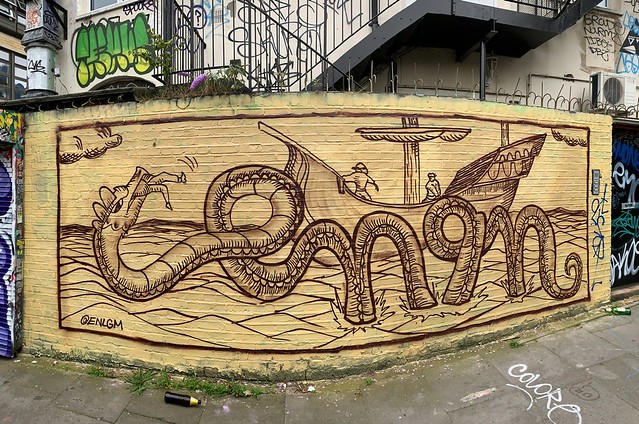 
Street art has developed to a level of variety and sophistication that it takes something quite special to stand out. As observed in our look back at Shoreditch street art 2021 favourites, the street art of this new (to us) artist Enigma was a highlight of a rather unusual year. It won’t escape your attention that the leviathan serpent traumatising that unstable looking ship above spells out ENGM, a contraction of Enigma’s moniker in a style barely removed from graffiti. The sea serpent was our first stop-you-in-your-tracks encounter with Enigma’s art last year. 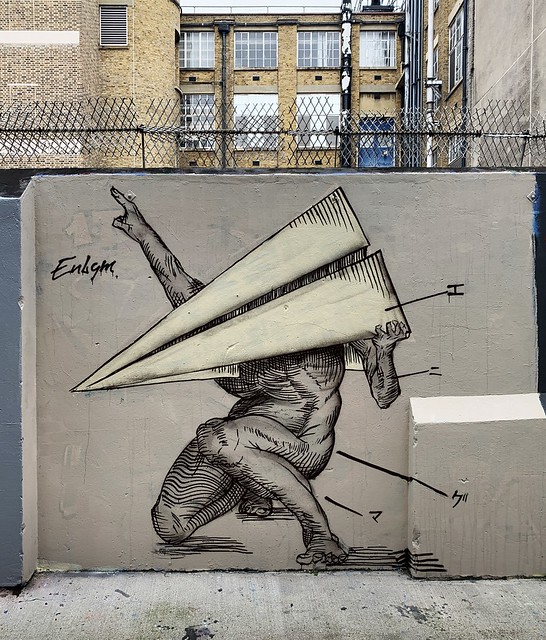 
A sepia appearance coupled with extensive use of cross hatching lends Enigma’s art an unfashionable antiquated appearance. Street art is awash with pretty but very average photorealistic portraiture, there is a huge gap for new artists prepared to buck the trend, to not follow fashion. Enigma's vision of Lucifer cast out of heaven, based on a detail of Cabanel’s Fallen Angel, has butterflies where others paint wavy locks of hair. 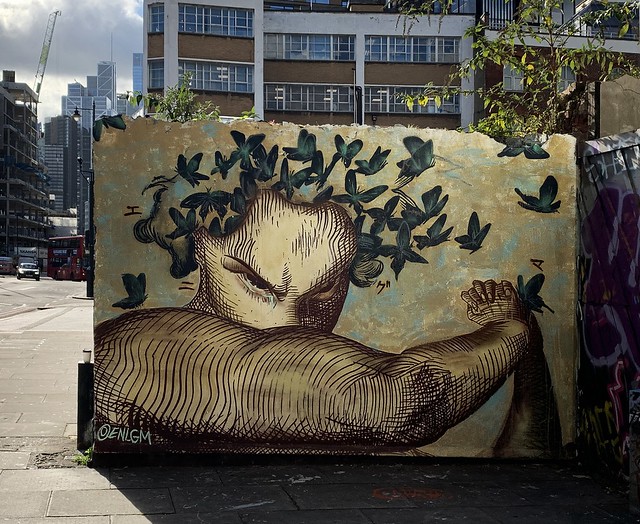 
Elsewhere faces are sliced to reveal what a proper clockwork orange looks like. 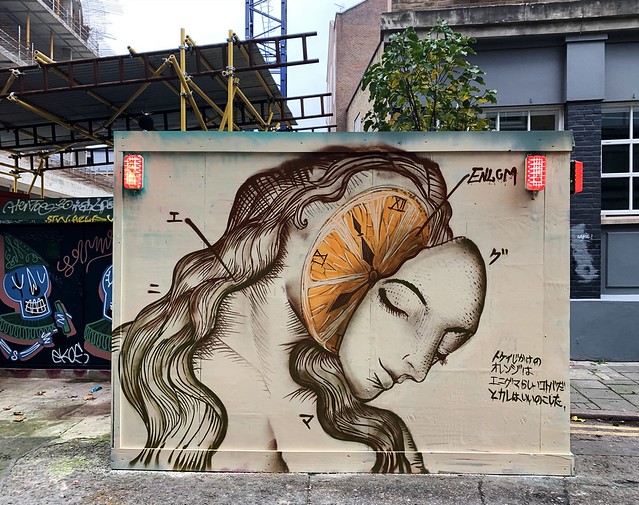 
Surrealism and distortions suggest an artist enjoying playful imagery and experimentation. How many eyes can you or indeed should you fit on a bowler hatted whale or on a chequered finish flag winged stag beetle? 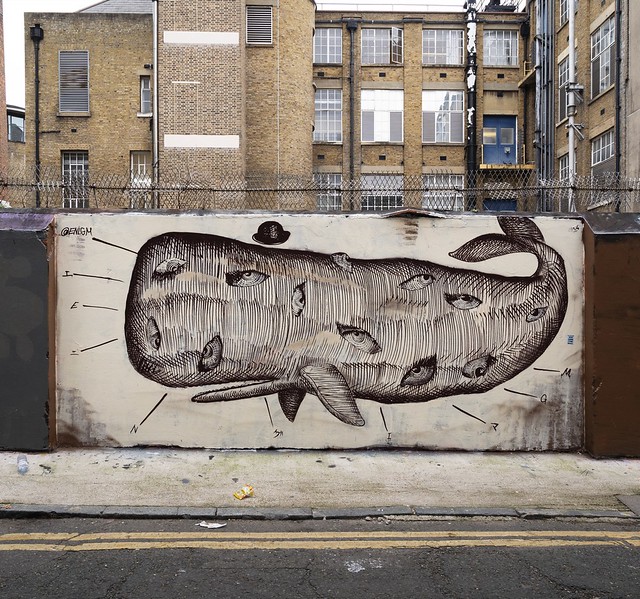 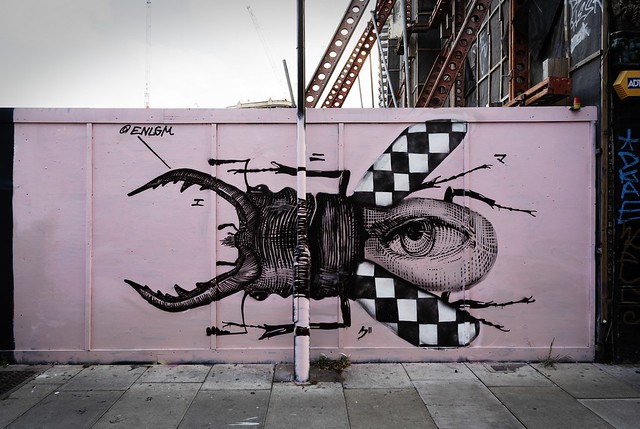 Love Is A Verb


Fish currently feature frequently in Enigma’s compositions, though the circumstances are typically bizarre. 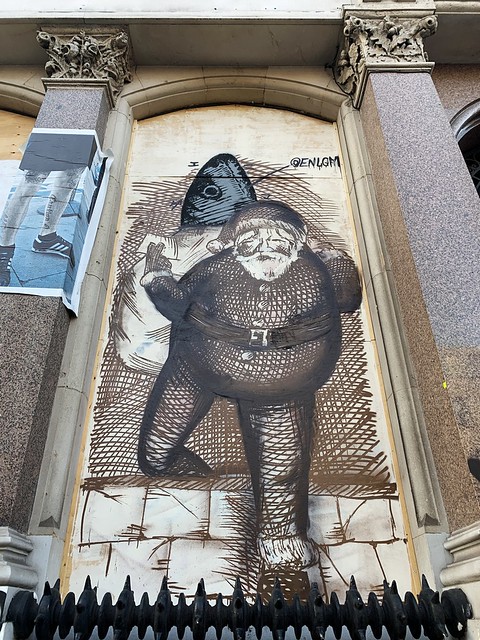 
Enigma’s representations of body parts might resemble pages torn from vintage anatomical studies though a recent fish emerging from an ear could owe more to Hieronymus Bosch. 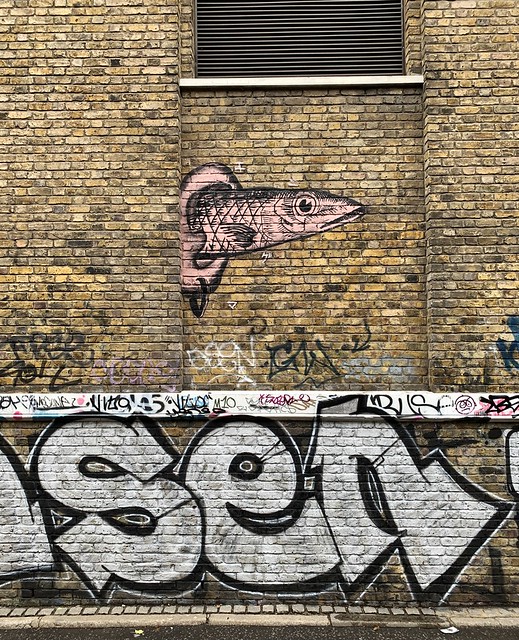 
Another theme in Enigma’s recent art has been shadow hands creatures. Those “how to” guides to shadow puppetry never convince you that the contortion of the hands could cast the demonstrated shadow, Enigma teases you into the same shadow guessing game. 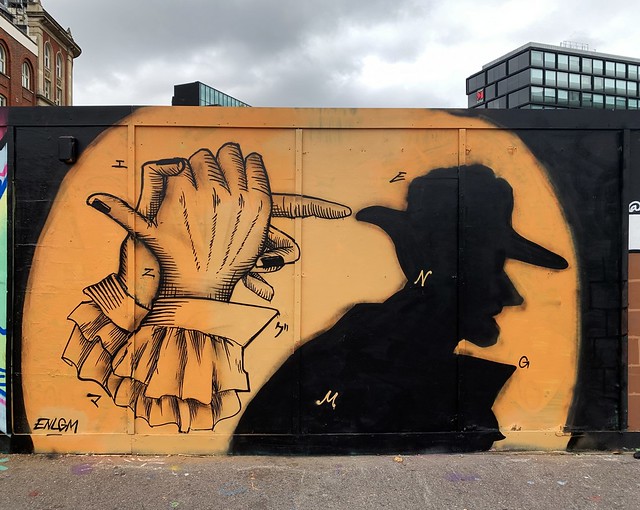 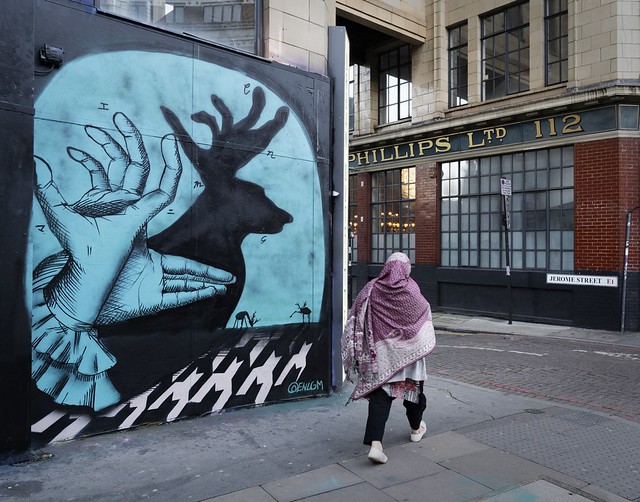 
A conceptually paired couple of paintings play with the notion of a shadow rabbit created by hands then the actual creature casting a shadow of a hand. 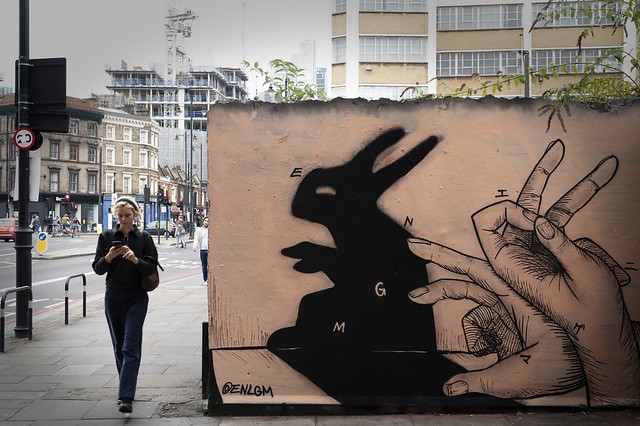 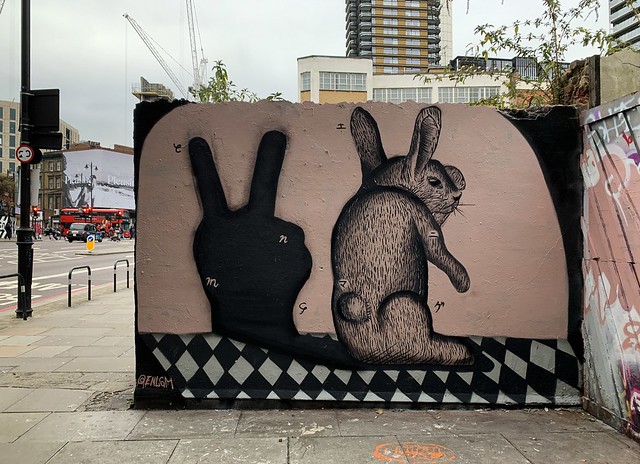 
Jeopardy crops up frequently in the paintings and this ship in its shattered bottle certainly faces stormy seas and rocky Shoreditch shores. 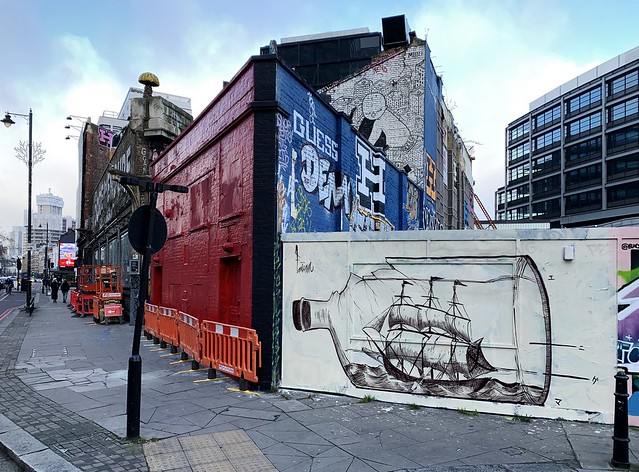 
Enigma even infiltrates occultist references onto Brick Lane walls, the grinning jester in his harlequin clothing is based on the Hanged Man in the tarot card system and represents submissive states such as surrender or sacrifice. 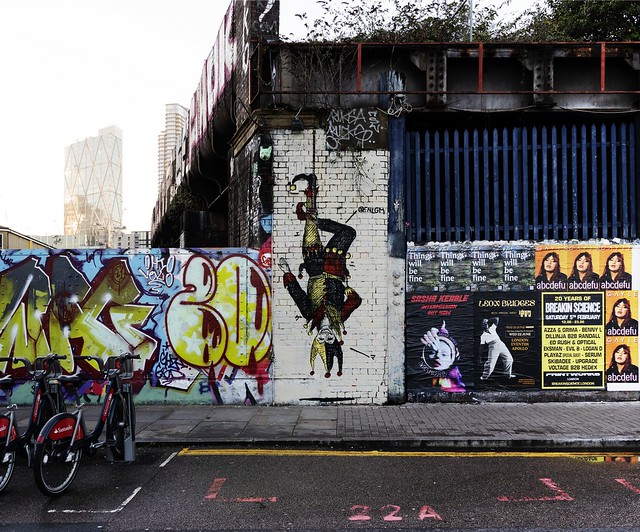 
Enigma garners respect and praise from fellow street artists and when you watch Enigma’s painting style close up you can see why. His can control would be admired by many graffiti writers, those fractured cross hatching strokes come from practice and skill not accident or chance. 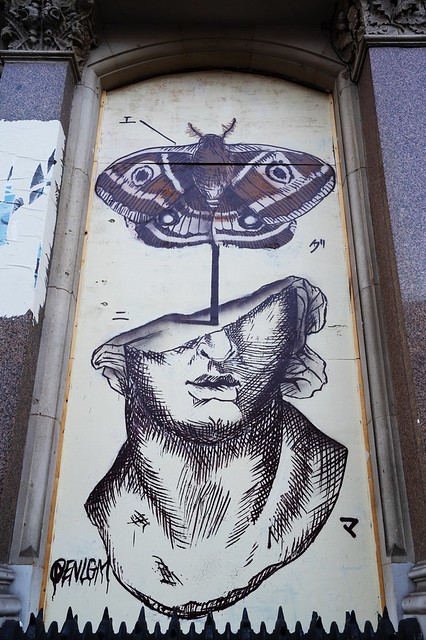 
Enigma has thus far had few gallery outings in London, what has been seen indicates his street art translates beautifully onto rough canvas, as spotted at the Secret Life Gallery in Shoreditch last year. Instinctively it feels like there is more and better non street art to come from Enigma. 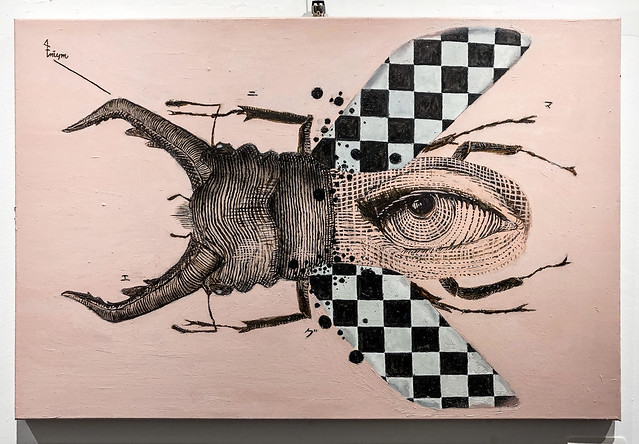 Love Is A Verb Canvas 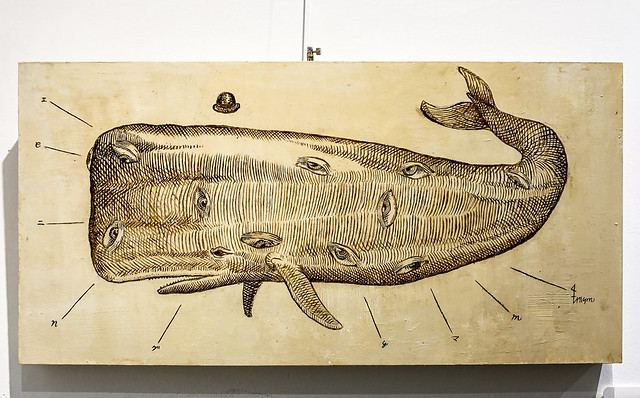 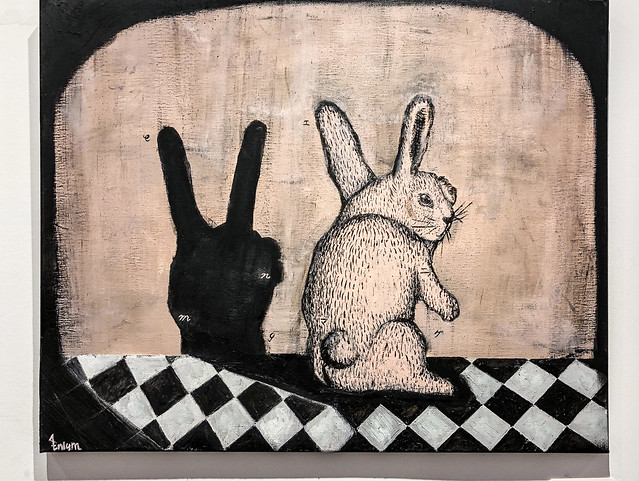 
There is a lot of fun to be had with a little light painting, a long exposure at night and Enigma’s high contrast imagery. 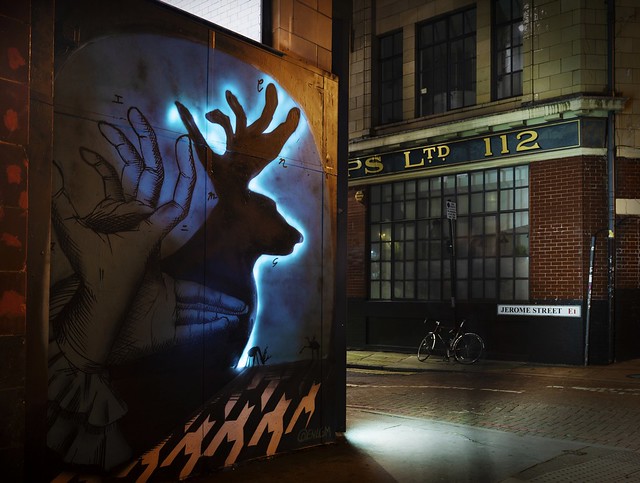 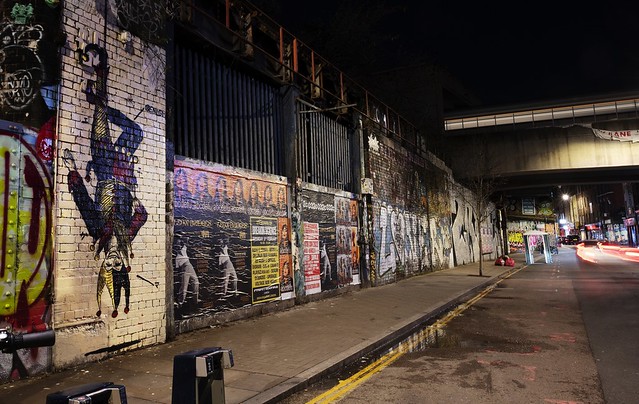 
Enigma has proved to be very engaging with the public. 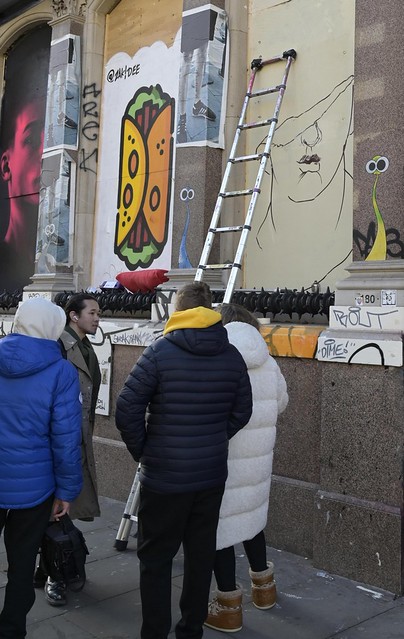 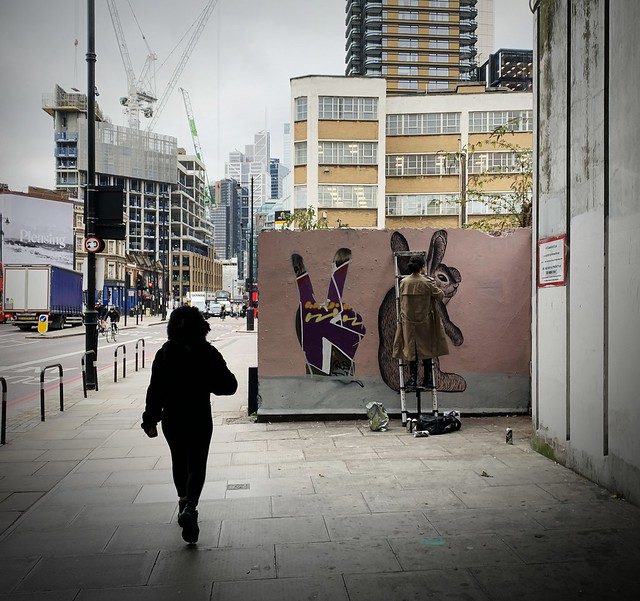 
We just don’t see enough thematic street art paintings, if you want an idea of the kind of level Enigma is operating at it Ed Hicks might be a suitable peer, a comparison that neither insults Ed nor flatters Enigma. The sources Enigma mines for his art, fractured ancient Greek busts, tarot cards, cast out demons and psychopathic Kubrick films do a bit more than merely hint at dark undercurrents within his art. There is an intellectual depth and creative variety to Enigma’s painting and in the high turnover here-today-forgotten-tomorrow world of street art it is testament to Enigma that his paintings are memorable. Let’s hope Shoreditch continues to play host to his street art for a long time to come. 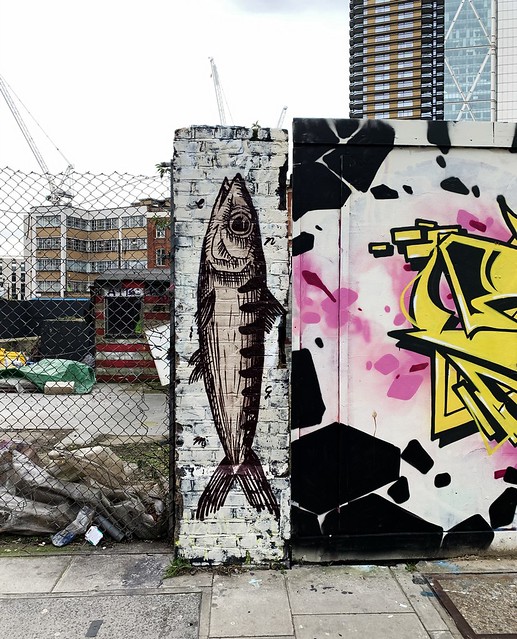