Meeting Of Styles returned to Shoreditch last week for the second Summer on the trot. Over a 2 day period spraycan graffiti writers and street artists from Brazil to Russia via Spain and UK threw a wild ribbon of colour around Shoreditch. 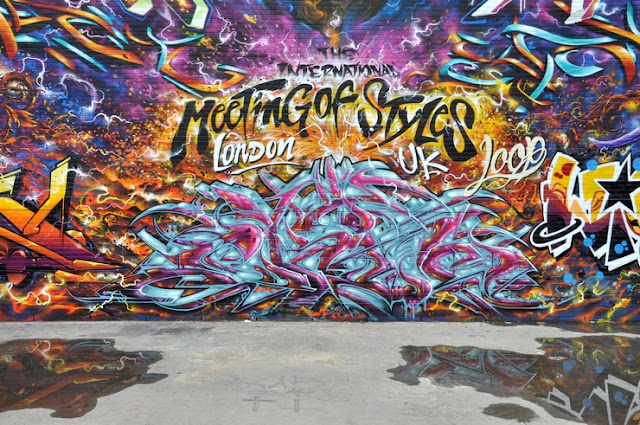 
Meeting of Styles is an international and not-for-profit federation of spraycan festivals, this year 22 MoS festivals around the world are responding to the “Mind Above Matter” theme

Brick Canvas Central if we can call it that was a dramatically transformed elbow of land trapped between a knot of railway tracks now under new ownership and currently renamed the Nomadic Community Gardens. 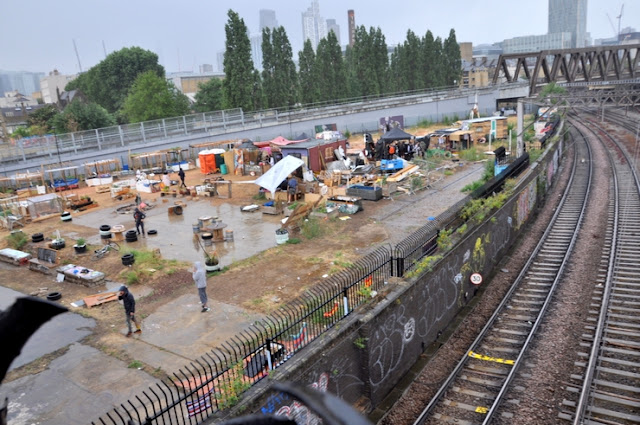 A primarily Bangladeshi community has transformed the Fleet St Hill end of the gardens with raised beds of allotments while a temporary village of tents, vans and dens of upcycled wood and canvas housed kitchens, bars, decks and admin. 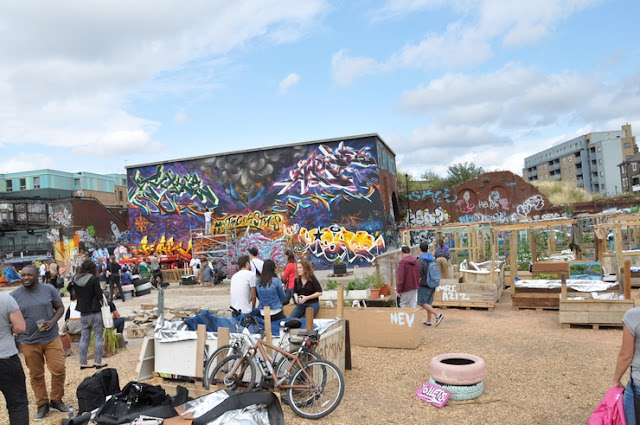 The set piece featured wall on the Fleet Hill Arch was this year tackled by a multinational crew on Mind Above Matter theme (last year: men and beasts), artists making appearances on this huge collaboration are: Tyme (Swe), Adno (Rus), Awone (Swe), DJa’Louz (Fr) and from the UK Jim Vision, Zadok and below them Kak, Ekto and Wisher. You have to get close this year to the wall to appreciate the letter mastery and intricate details in the background, which wasn't the case at MOS UK 2014 when the grafftiti writers rolled a lot more images into the composition. 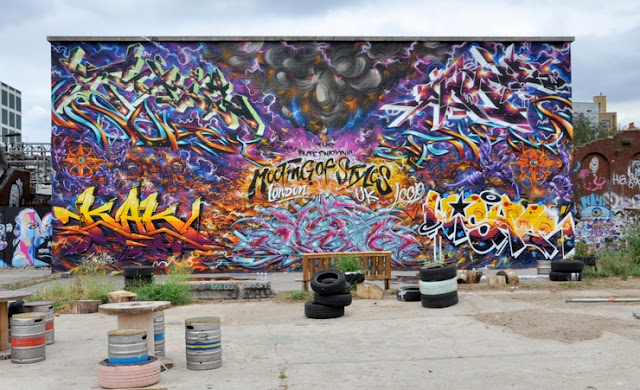 Wall locations were geographically more wide spread this year, the centre of weight shifted over to the Bethnal Green side of Brick Lane with some painting taking place even further east than the Nomadic Community Gardens. The walk from Nomadic Gardens yields awesome examples of 3D lettering included these pieces by Ebee, Zase and OG Hush. 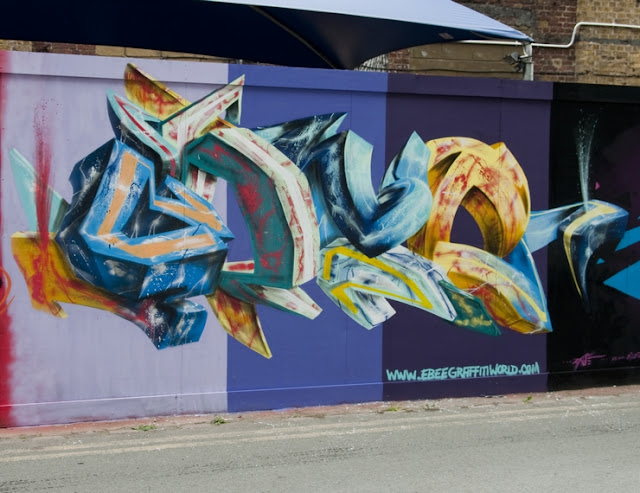 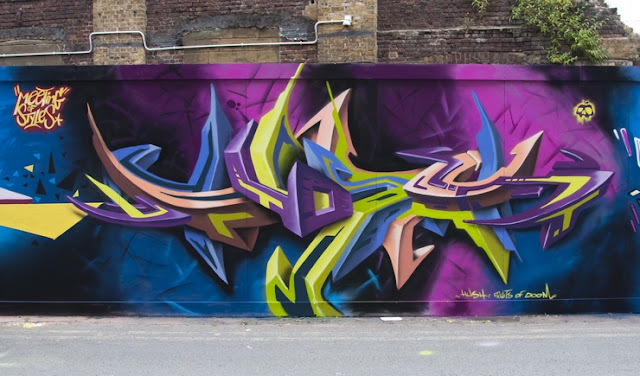 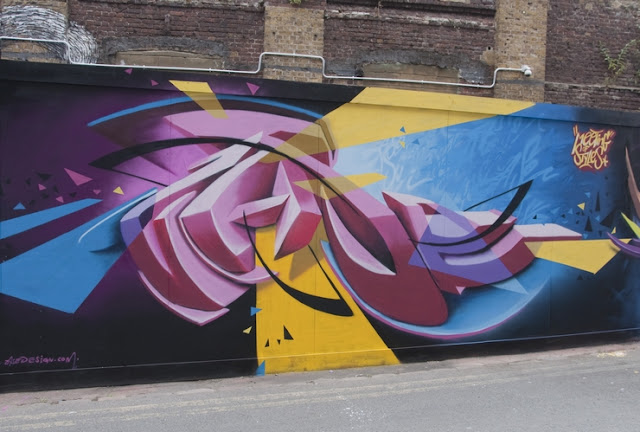 
Up on Redchurch Street, OTwo and Andrrea Riot entertained the crowds with their abstract background and calligraphic “graffuturism”. That background is awesome, the calligraffiti reads Wizard Kings. Or perhaps Wizard Kinggs. Or maybe something else completely different. 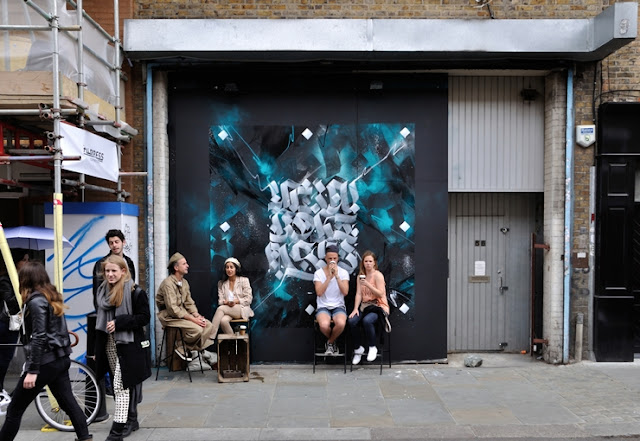 Continuing the graffuturist or “post graffiti” theme, Stendec from the wilderness north of the wall and Soma painted this amazing piece east of the Nomadic Community Gardens 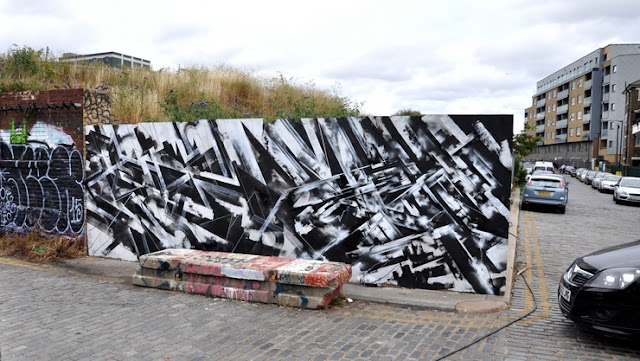 
It is very easy and actually common for those close to the culture to see Meeting Of Styles as a letterform based graffiti shindig but it actually has always aimed to be wider and all embracing. Traditional bubble letters and wild style sit happily alongside the abstract and the calligraphy based. Signwriting fonts converse with characters. No stencils though, no surprise there! 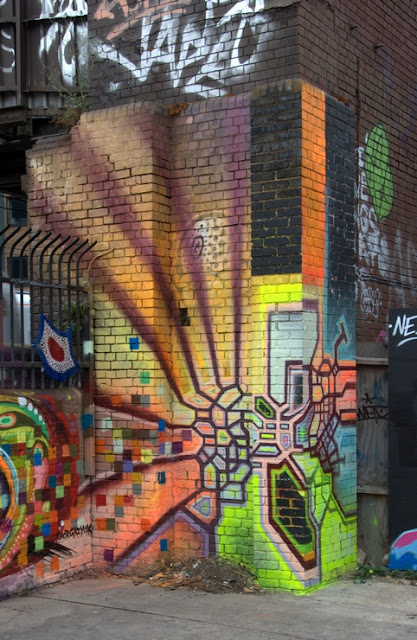 
If you happened to park your van somewhere and returned to find it defaced by Masai and Airborne Mark like this you would have to have a heart of lead not to be excited. 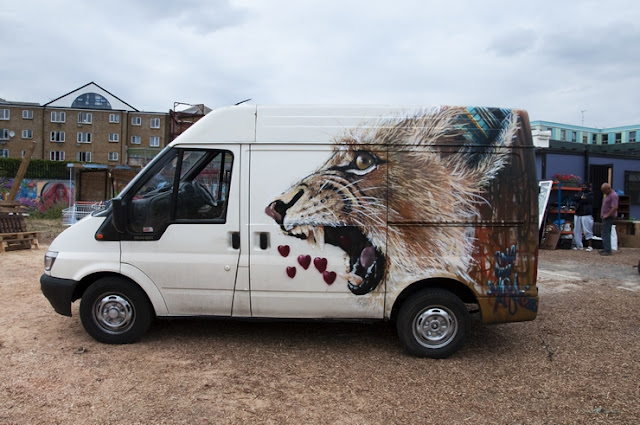 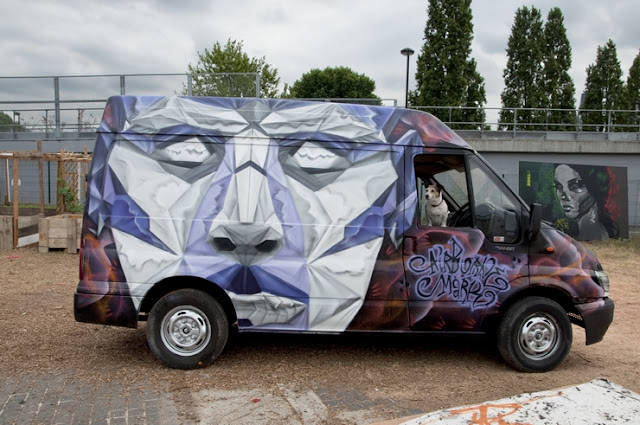 
Neoh continues to create work raising awareness of mental health issues, this is believed to be first example of pure face portraiture rather than figurative beauties from Neoh. Given the nudity that has crept into his figures recently it was probably a good call location to focus just on faces in this community! 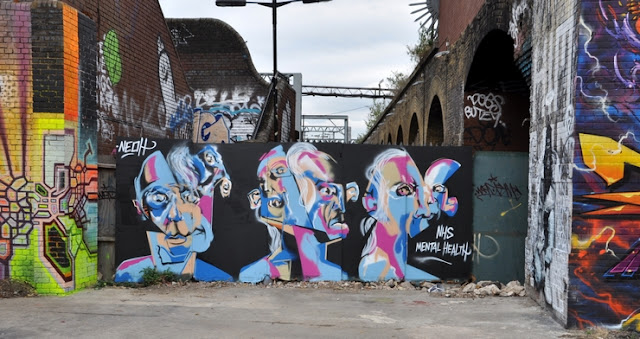 
There was even sculpture from Joel Dean from Ireland though some of the improvised seating, shelter and indeed cooking arrangements also took on the appearance of sculpture. 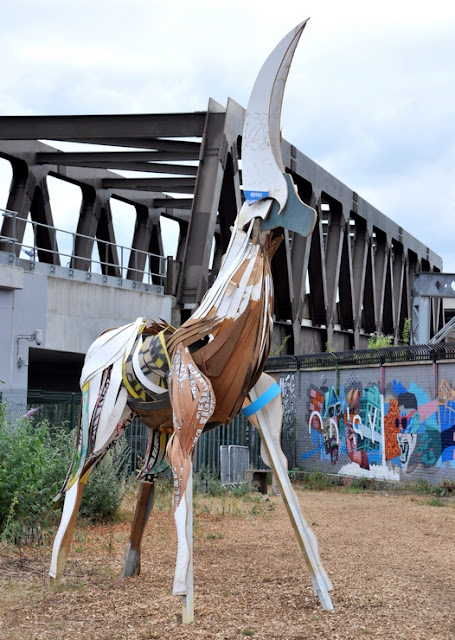 It is proper to give a salute to visiting international artists who trekked to Shoreditch to participate in this London edition of MoS. 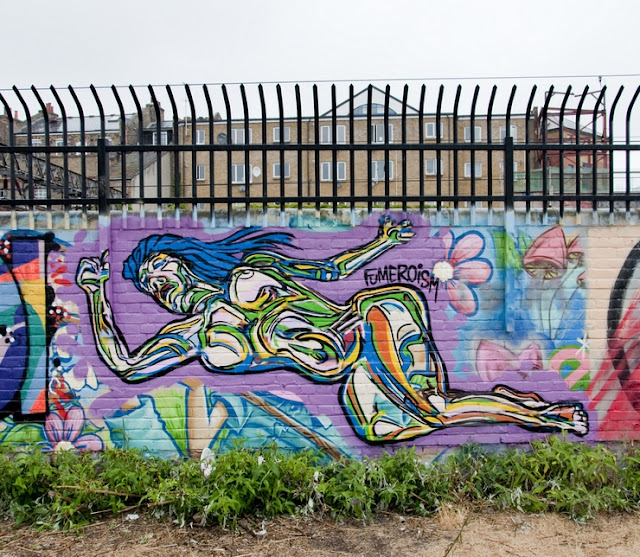 
Jotace is from Barcelona and found space alongside Morgazmik and the awesomely productive FPLO from Brazil. 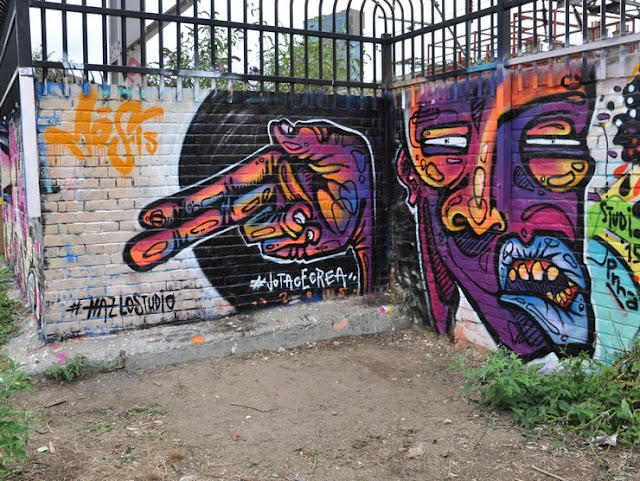 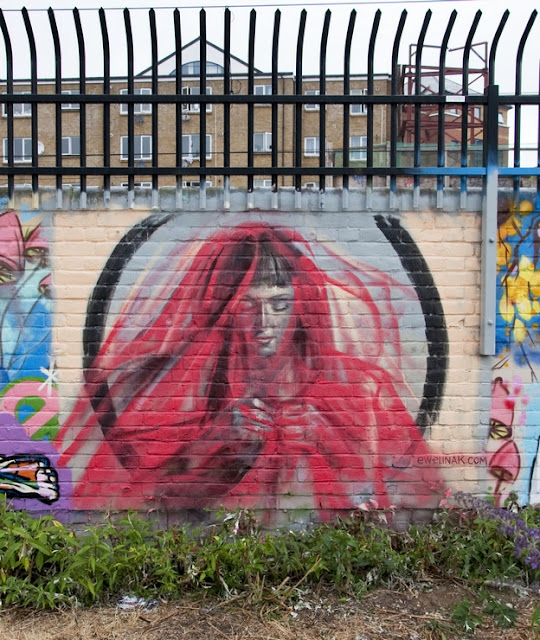 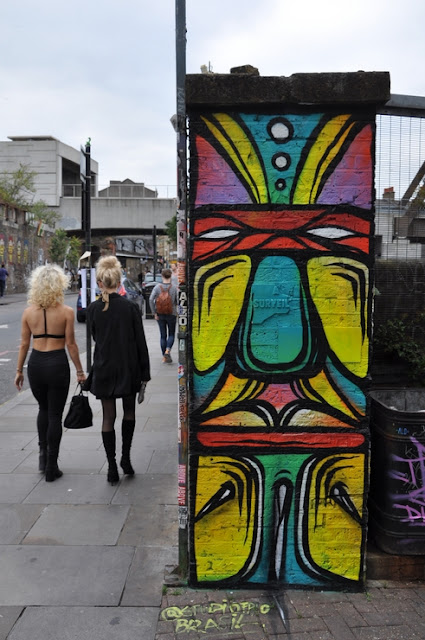 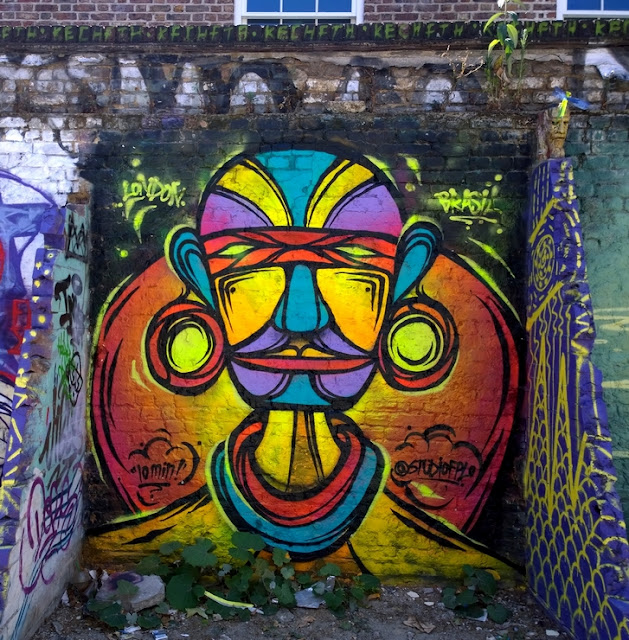 
Adno found time to pull off this beauty on a gate just off Brick Lane. 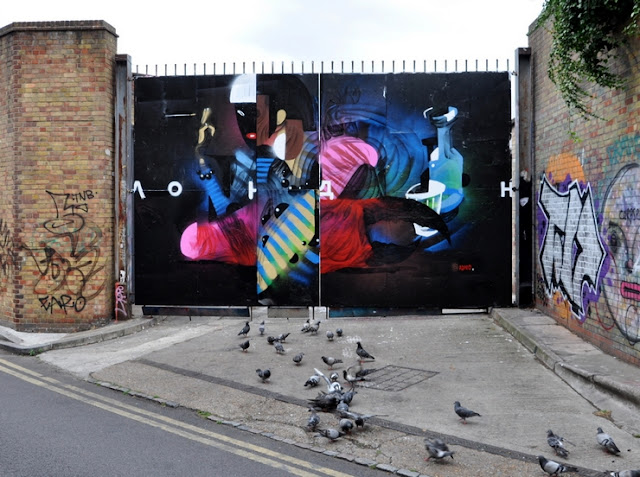 
The festival ranges beyond the multiplicity of painting styles to include hip hop and beatboxing, street food, soul food and have-a-go workshops. 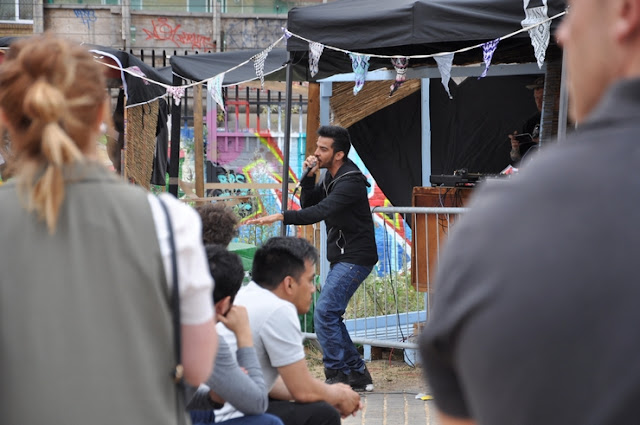 
There was actually genuinely something for everyone and the whole event was accompanied by a wonderfully chilled and relaxed vibe. Apart from the amazing painting by the Meeting OF Styles artists, this plot of land is well worth visiting to see how the community have transformed it with their collective urban agriculture spirit.

Just for fun to end with, some "work-in-progress" action shots from the Sunday: 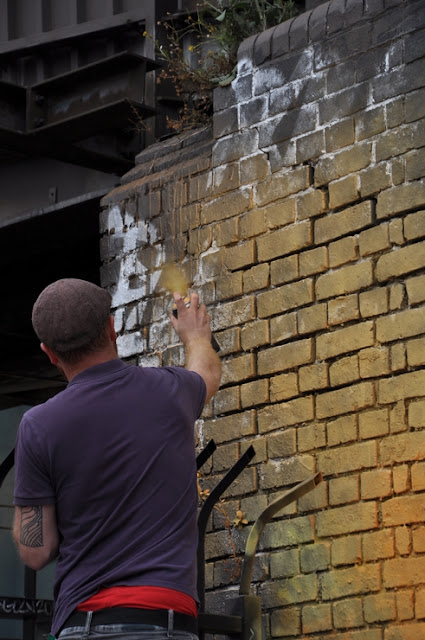 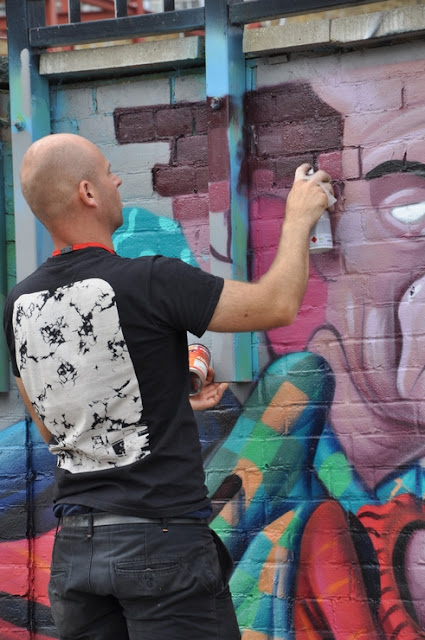 Gent 48 (Birmingham)
Posted by NoLionsInEngland at Wednesday, July 22, 2015 No comments: