You wait all year for conscience driven awareness raising street art campaigns then two come along at once.  A couple of weeks ago, not long after Graffoto wrote about Dan Witz’s Empty The Cages project, Louis Masai was spied on the streets of Shoreditch at the early stage of a bit of creativity.   At that point the work in progress over the tattoo inspired strong colours of the underlying piece of art looked stunning itself. 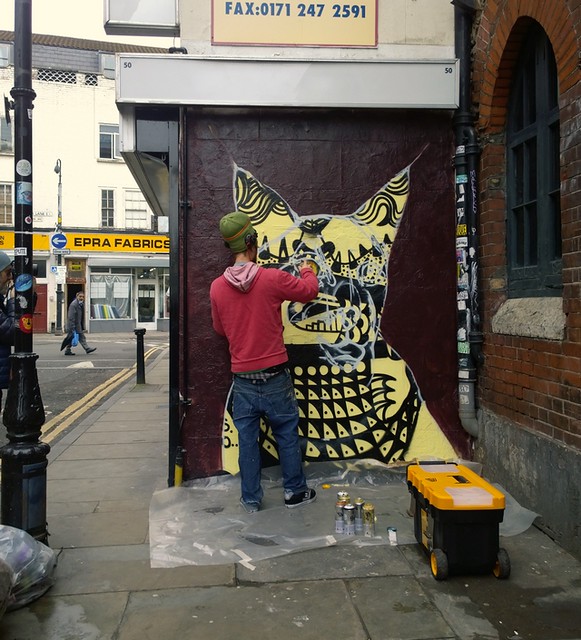 This Is Now - Louis Masai work in progress


A couple of guys watching and filming the action explained that Masai was engaged on a programme of painting murals in support of IUCN (International Union for Conservation of Nature) and the charity Synchronicity Earth and his specific project went under the title #ThisIsNow.

A couple of days later on a trip to Camden Market for some wardrobe related items (wow that place has changed) another Masai creature, a yellow tailed scorpion was discovered.  This prompted a wider search and the discovery of quite a number of #ThisIsNow paintings in the Camden and Shoreditch areas. 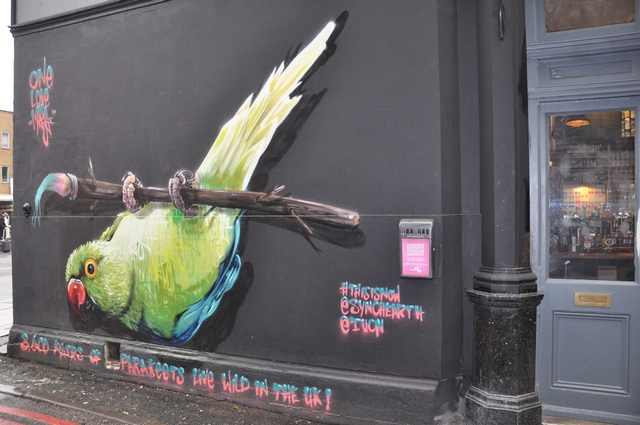 Parakeets - cause of much tree focussed finger pointing in nearby Regents Park (true!)


The campaign’s purpose is to raise awareness of the dangers of extinction faced by a huge number of species on the IUCN Red List.

Masai is known as a painter with a deep concern for environmental issues whose gift for spraycan art has been applied to photorealistic animal portraits for years.  It isn’t quite true to imply in the opening sentence that we have not seen any issue based conscience driven art up until now, earlier this year Masai pursued a stunning campaign to highlight the dangers of the mass bee death taking place in the States (no bees =  no pollination = crop failure = mankind demise).   It helps of course that Masai is a skilled spraypaint flinger and the subjects have a certain animal kingdom cuteness.


There are several strands to the #ThisIsNow message.  “Did you think you wouldn’t miss them?  Well it’s too late now” suggests the Orange Spotted Emerald. 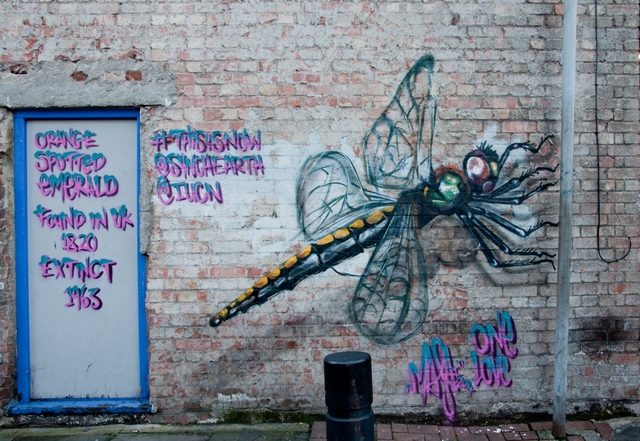 
“OMG we got to do something fast” is the call to arms issued on behalf of the household sparrow. 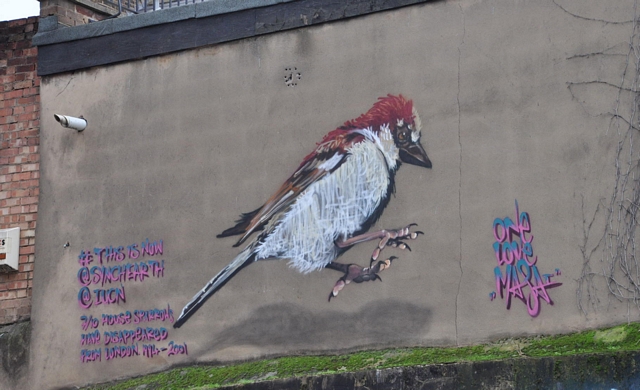 
The message underpinning the invasive species paintings is perhaps a bit foggy, are we for or agin?    The term invasive species has pejorative notes; China, did we ask for your Mitten Crabs? No, we spend a lot of money re-tooling ships to stem the flow of invading maritime hitch hikers, yet in his own words Masai appears to appease.  For instance the yellow tailed scorpion “having little impact on the environment….hiding in walls …barely a sting” sound like perhaps they ought to be given a guarded welcome.  There is a suspicion that this might be one of those rare issues Farage already has an actual policy about. 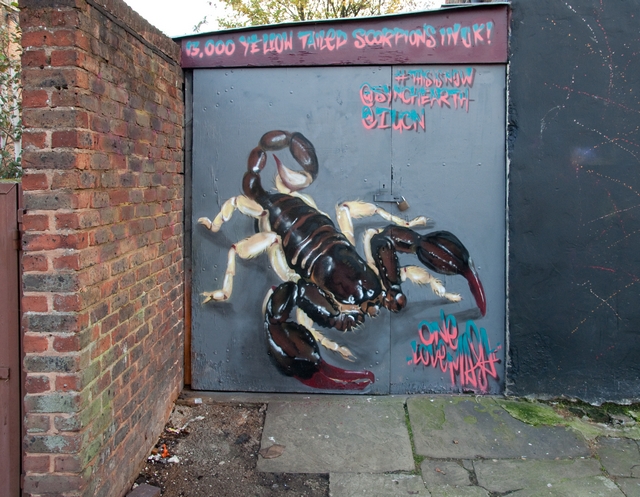 
There are a grand total of ten of these great paintings to be found but South of The River is a bike ride too far for this report, so for the rest head down to Brixton. 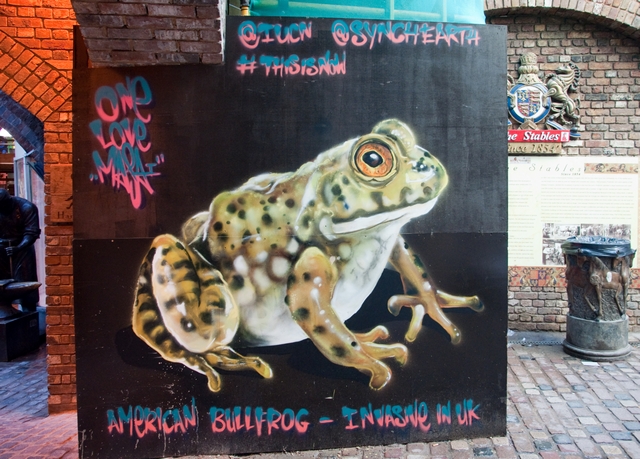 The American Bullfrog.  Fancy that being invasive. 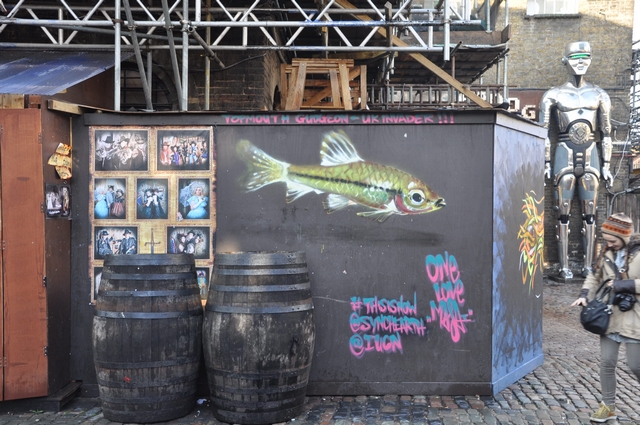 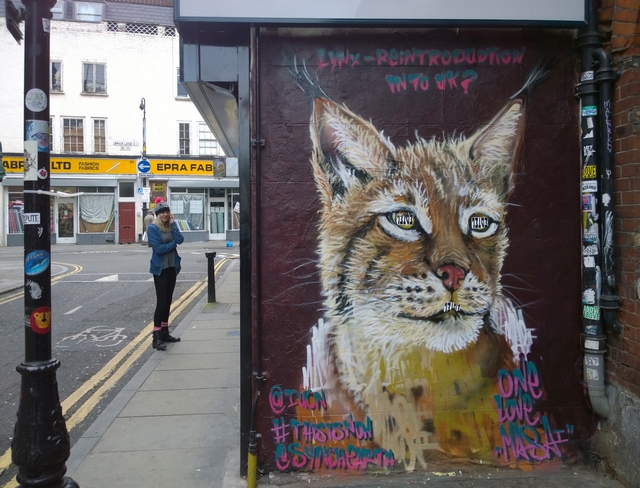 The Lynx, apparently an extinct native species in the UK (subsequent stickers added by artist unknown)
Posted by NoLionsInEngland at Thursday, November 27, 2014 No comments: