Some People Are On The Pitch...

Why does a street art tour guide snap adverts? The answer is simply for love of the graphic response adverts provoke. The way people subvert, augment and modify adverts is pretty much an artform in itself. The printed advert becomes a host for forced artistic collaboration and capturing the “before and after” timeline yields fascinating mini histories of public intervention. 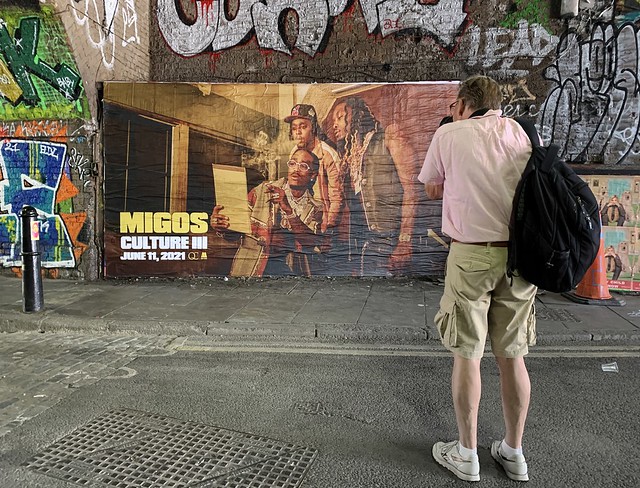 
A week ago I photographed an illegal flyposter advertising a new album release, in itself it was a quite compelling photograph. When I returned from a week in Wales the advert was still there, to my surprise, though now it hosted several graffiti enhancements. The black tag with the jagged arrow underlining reads ARTIK LTB who is an hugely impressive creator of large scale rollerbrush graffiti all over London. There is also a vertical tag which could be “Sey”; the large “throw” over the three characters in the advert appears to read PY and there is an arcing “Shmokey” tag in a white marker with quote marks and triple dotted underlining. 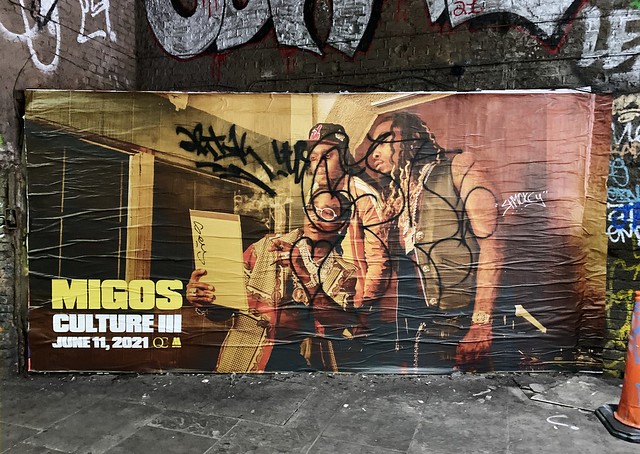 Artik, Shmokey and others vs Migos


The next morning the Shoreditch Street Art Tour strolled through the tunnel and that advert had been replaced with a fresh crop of flyposters which I dutifully snapped at high speed as we passed by. Although I am I swear completely and utterly immune to adverts, there is an advert for Ed Sheeran in that collection which is a curious coincidence as last Summer on a Shoreditch Street Art Tour we spotted Ed Sheeran serving burgers out of a silver airstream style street food truck just yards from that very spot. 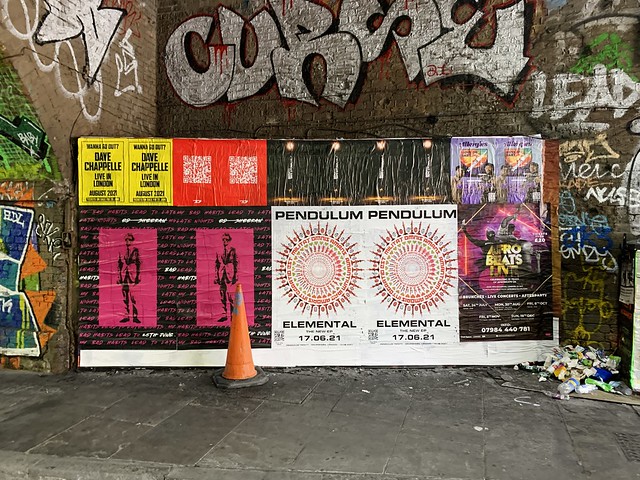 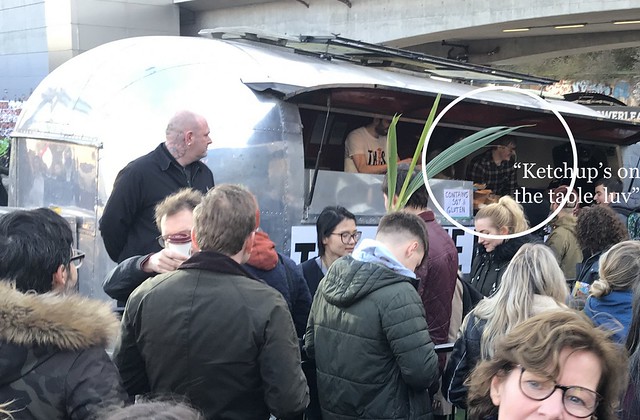 
To my delight, just 24 hours later on Sunday that collection of adverts had augmented with a gorgeous fat chrome and black dub by Noyse. 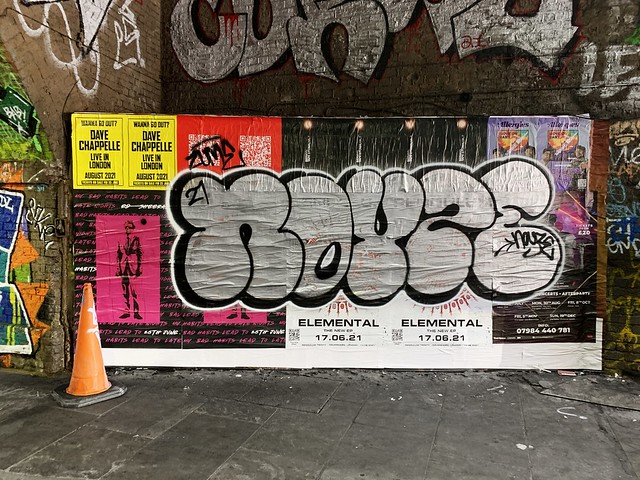 
So, why do people make marks on adverts? In the case of street artists, being anti advertising has been a core sentiment since the movement’s origins, for many artists it justified illegal street art created in response to desecration of the visual public landscape by overwhelming advertising. 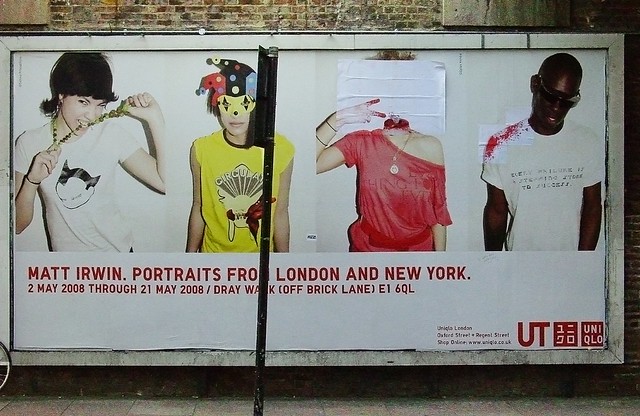 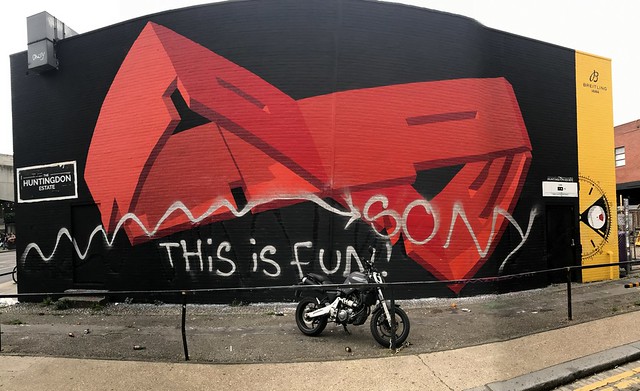 
Just a brief note on the title of this essay which may seem a little obscure particularly if you are not British or a football fan. There is an iconic fragment of BBC commentary from 1966 seared into the nation’s most patriotic memory – just watch the short clip below; an advert is a “pitch”; people intervening on an advert are “on the pitch” and the football theme is relevant as the Euros are currently underway 1 year late.


Here is a small selection of some favourite earlier examples of advert subversion: 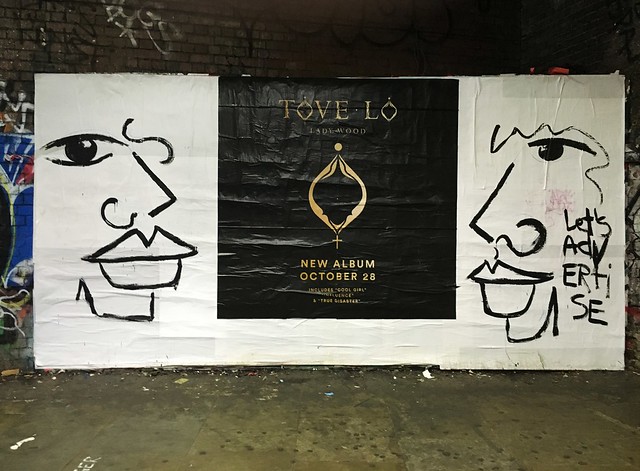 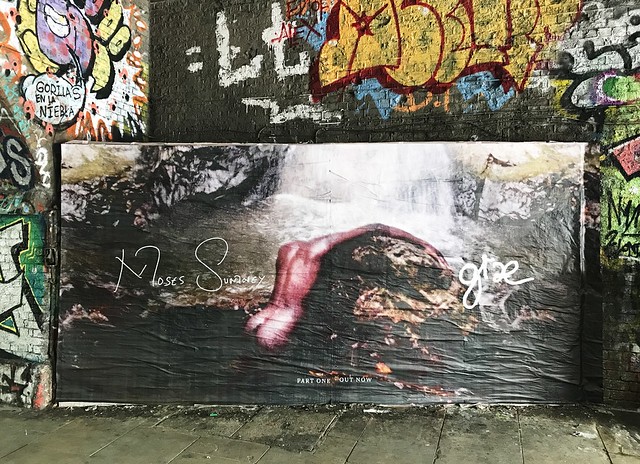 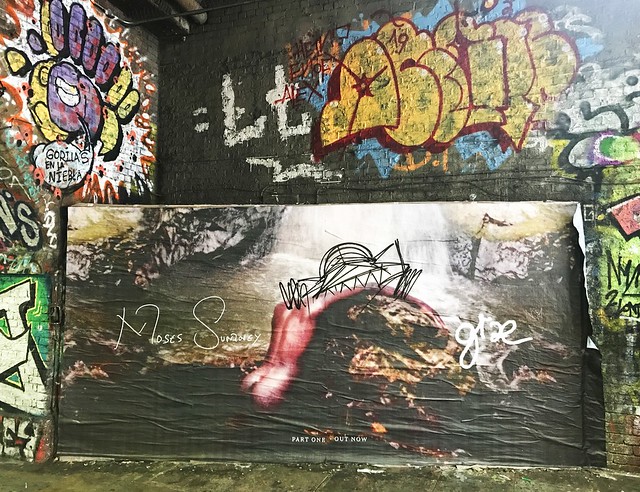 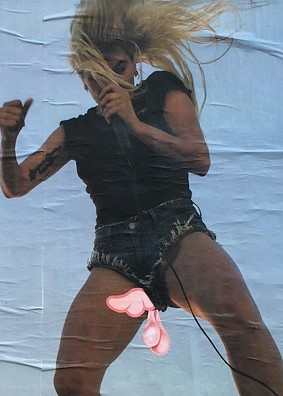 
Does the advertising work? There is still no way I would buy an Ed Sheeran album :-)

Posted by NoLionsInEngland at Wednesday, June 23, 2021 No comments: 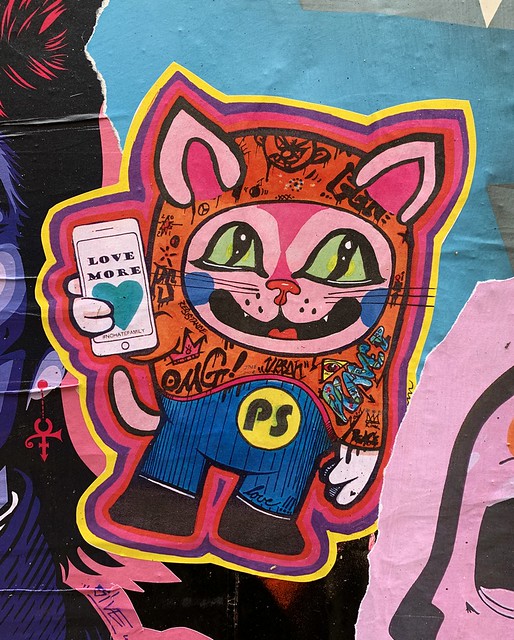 As we enjoyed a rare hot late May bank holiday in the UK, the Bank holiday Monday Shoreditch Street Art Tour discovered a fascinating range of new street art that had been put up since just the day before.  One curious aspect was the number of gorgeous collaborations, in fact just for fun we could link the artist combinations in a street art “degrees of separation” web of connectivity.   The main image at the top of the post features Planet Selfie & Hello The Mushroom. 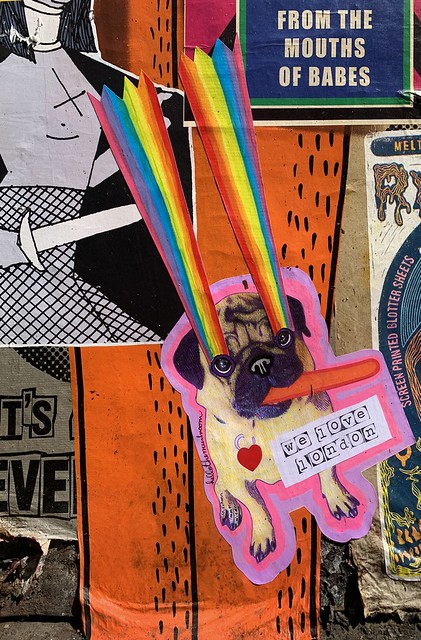 Hello The Mushroom in collaboration with So.Schoen.Immer.Wieder

Paste up artist Hello The Mushroom, previously of London now based in Oslo, has collaborated creatively with many street artists from other countries and it was a pleasure to find eye catching art works with So.Schoen.Immer.Wieder, Planet Selfie, both of Cologne, Jens Regler from Sweden and Eraquario of Brazil. 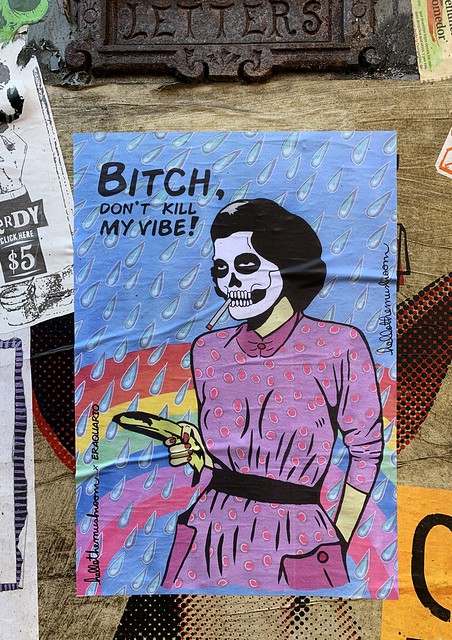 Hello The Mushroom in collab with Eraquario 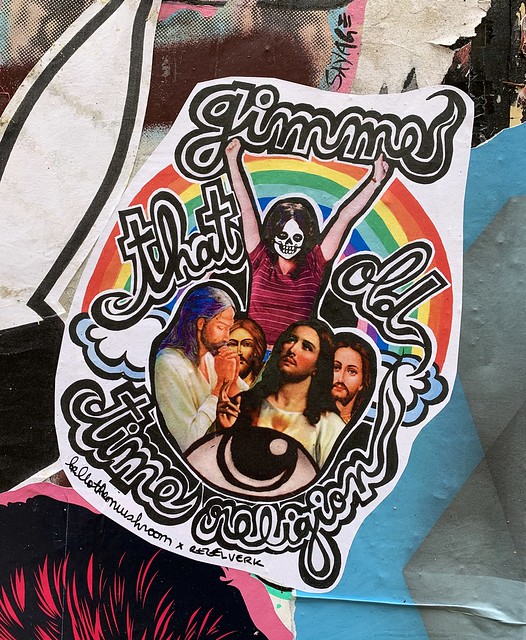 Hello The Mushroom and Jens Regler 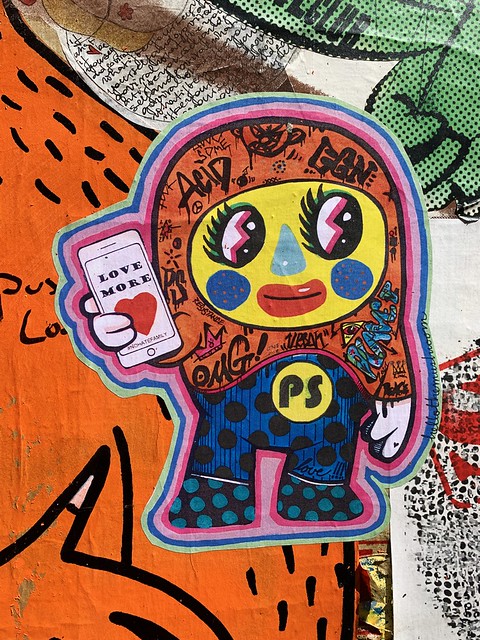 Hello The Mushroom in collab with Planet Selfie

Planet Selfie in turn has a collaboration up with Dacarter 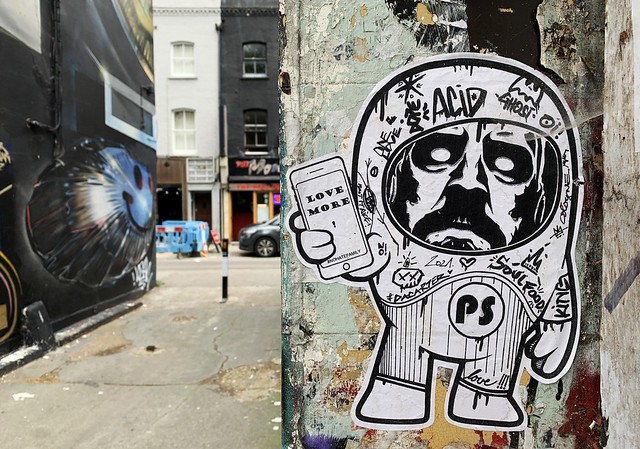 The above photo features also Fanakapan's anamorphic balloon at the entrance to that alley, meanwhile also in that alley is another Planet Selfie, this time with Rad aka Raddington Falls 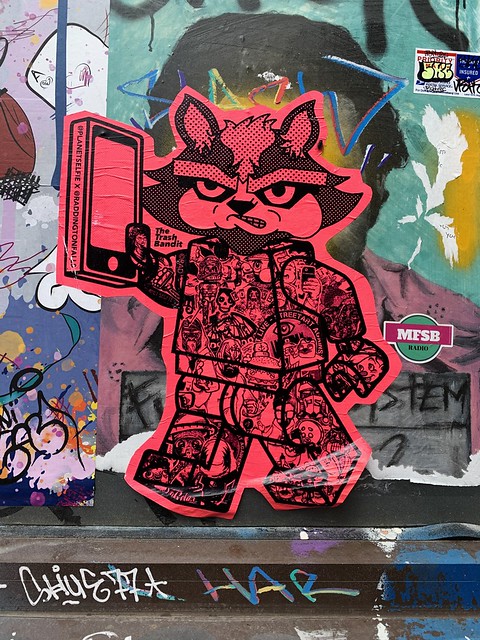 Here for good measure is a small sample of the many collaborations that have delighted and inspired us in the past year starting with a couple of my favourite street artists, Smiler and Face The Strange. 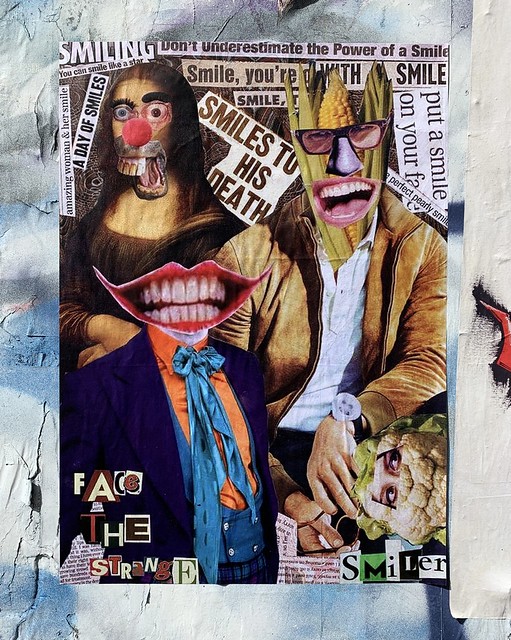 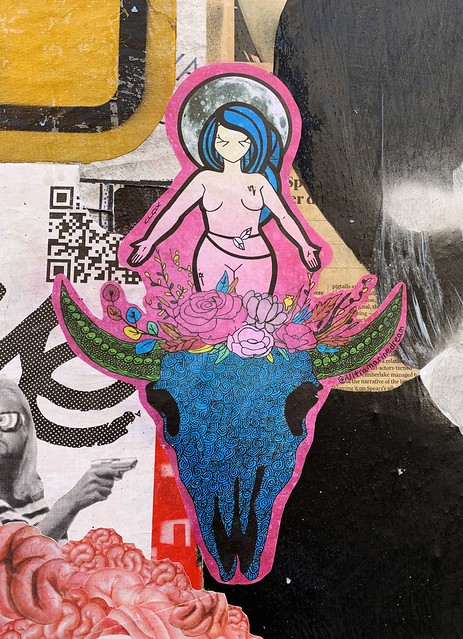 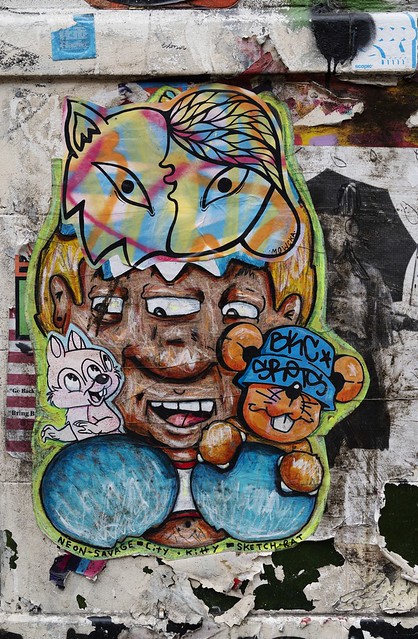 Mowcka revisited this collaboration and added a new hair piece to it, Mowcka told us

Check out the fading of the original colours since the photo below was taken in its infancy. 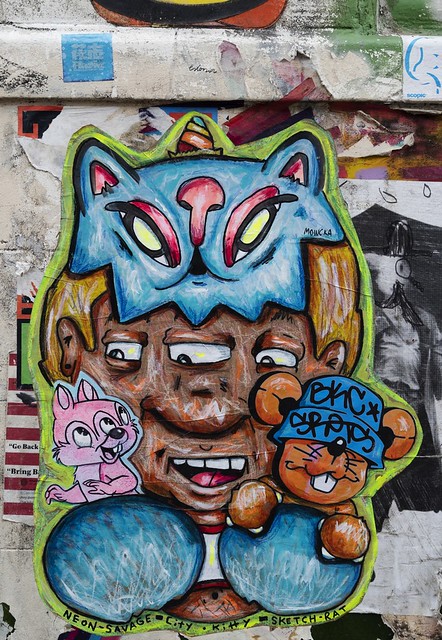 City Kitty has a podcast in which he chats with fellow street artist Lunge Box about this very subject, collaborations, check that out HERE

All photos Dave Stuart except where noted

Posted by NoLionsInEngland at Tuesday, June 08, 2021 No comments: