Perhaps the most prolific around the ancient borough of Shoreditch, haunt of their majesties’ crustier artists and other trendie subjects, was Dotmasters, in his customary supporting role as Bearer Of The Exacto Knife, delivering a prolific number of this single layer stencilled artistic tribute of the royal likeness presented in the form of police identikit photos. 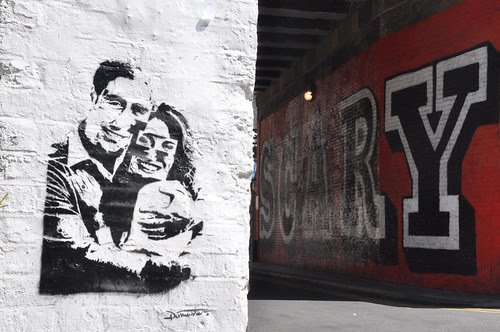 
Mr.Farenheit, Master of the Paste, has installed at strategic locations (i.e. the usual spots) a selection of newsprint pages stencilled over with a variety of messages expressing a commoner’s love the future Queen. 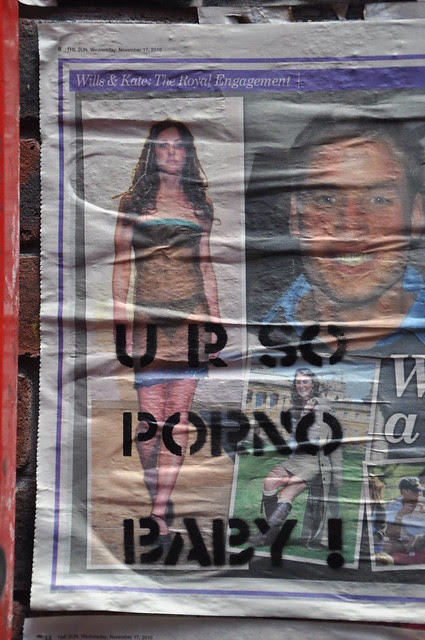 
A parallel between a Prince’s desire to be left alone (particularly when falling out of the VIP area area of a Chelsea nightclub with a dozen close freeloading rugger mates) and a reluctant sexual partner adorns several locations of the realm. 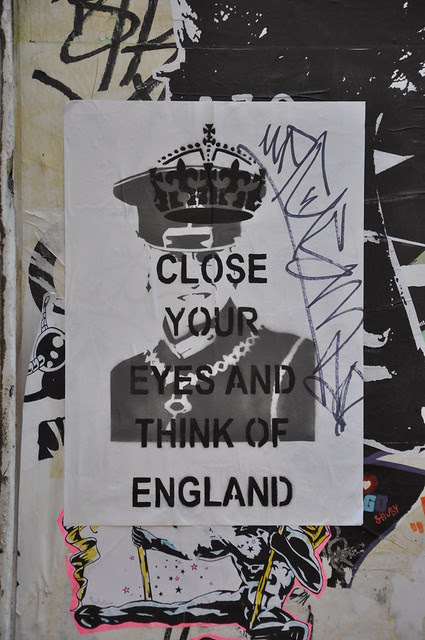 
The street art community has paid its respect to the ancient traditions of this Sceptr'd isle, led symbolically by its great royal figureheads, successors to a long line of distinguished and brilliant cross-dressers, into a brave new era of tourist economy dependence, determined to show the world whose eyes today watch our green and peasant land with envy and awe how Britain maintains its love of honouring those born to be first to the trough. 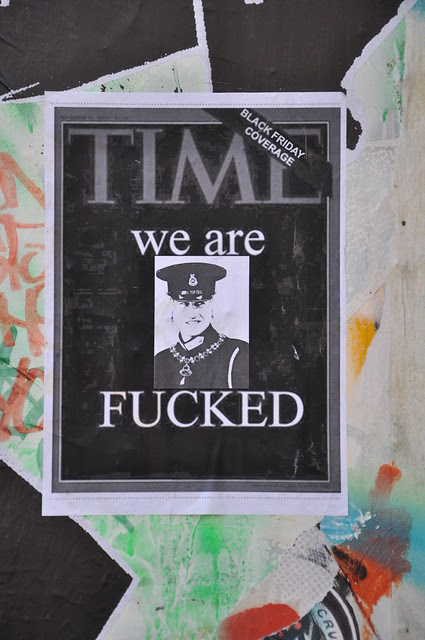 K-Guy produced a limited edition screen print but didn’t make it out onto the streets. This sort of summarises the general level of ennui reigning among a populace upon whom the greatest impact will have been “yippee, another 4 day weekend”. All in all a pretty paltry reaction to the wedding. Apart from the obvious targets - privilege, wealth and un-earned but mainly symbolic authority, it seems Willy and Kate present little material to inspire the artist courtier. Perhaps the scintillating wit and pointed political satire is being reserved for the eventual wedding of his swastika wielding brother.

Late update, I forgot about this one,as likely to be a paid for commission as not, cheque signed "love Liz and Phil"? 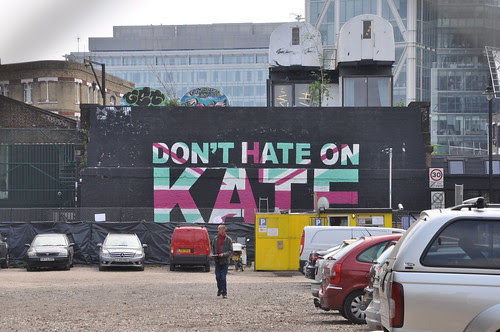 After The Piss Up.....The Paste Ups

K-Guy obviously felt the sludge landslide of instant commemorative pull-out souvenir colour supplements leant an excessive gloss to an overblown celebration of the marriage of the nation's favourite negligee manikin to the single beaming 2:1 chink of intelligence flying in the face of the royal family's fine tradition of academic mediocrity, so he silk screened this mass paste up souvenir bollocks with the exortation "God Save Your Mad parade" from the Sex Pistols 1977 Jubilee year single "God Save The Queen". 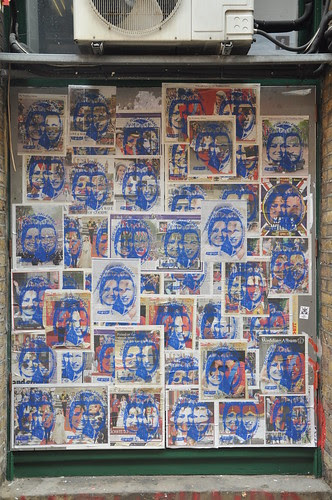 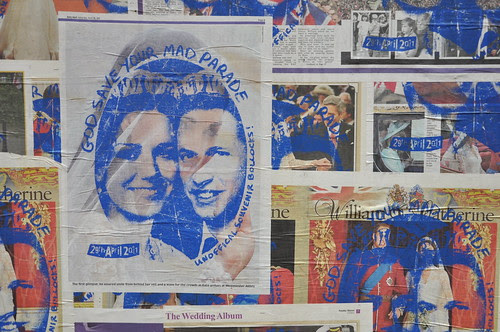 
Just yards away HowAboutNo, still reeling from an excess of Amsterdam refreshments, spotted a couple of figuroids bigging up William as a kind of "Mens Health" speedo poser and Kate with a splat of blood on her wedding dress designed by someone dead. Somehow we doubt that was the first time the Prince stormed her palace gates, c'mon, the Royals move with the times daddyo. 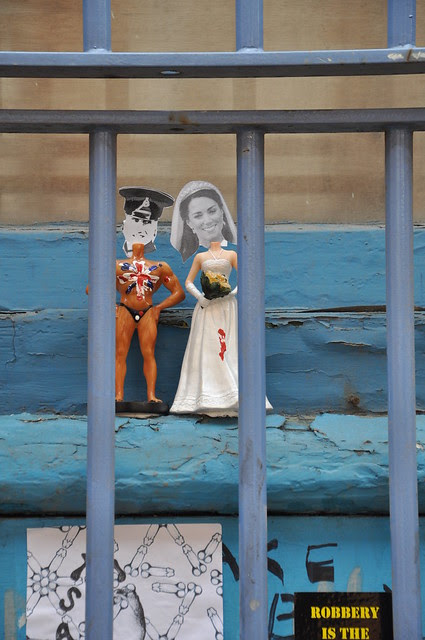 Lots of fun recently quietly observing a furtive pair of artists working silently and swiftly on one of London’s less accessible rooftops.

It took 4 nights and about 50 litres of paint for Sweet Toof and Paul Insect to blend signature imagery in this visible-from-space collaborative masterpiece. In essence, the painting is a double headed face munching away at the rooftop hut. Best viewed from 1,000 feet, the symmetry ensures the effect is the same whether viewed from the east over the Olympic Stadium or the west.

From the photography point of view this mission had a few tricky aspects. Obviously you can’t go throwing huge illuminative arcs of light around so you work with the natural light. The first night, after about 20 minutes the low cloud base boiled away and the urban-orange sky turned black plunging the rooftop into darkness. At the end of the clip you can see the opposite happen. Exposure times varied dramatically between 10 and 30 seconds.

There are two gas boiler outlets on the upper level, the output from those condenser boilers is bloody wet. Using a patented knotted rope to get up there to set up a camera position, the wind would veer and back unpredictably giving the camera a misty drenching. 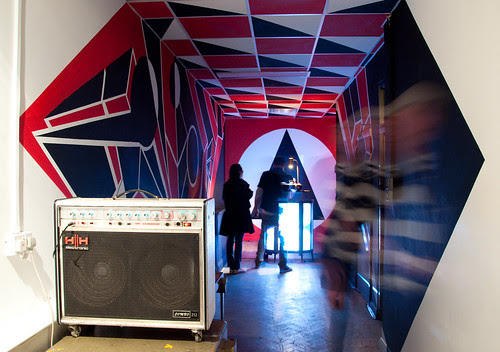 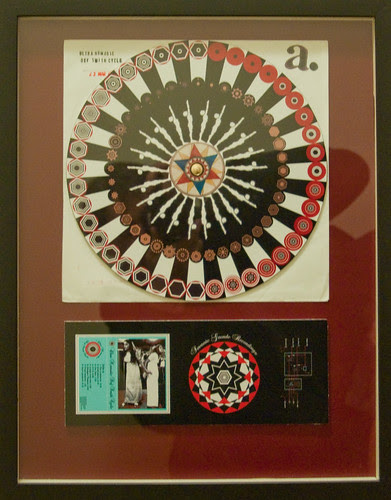 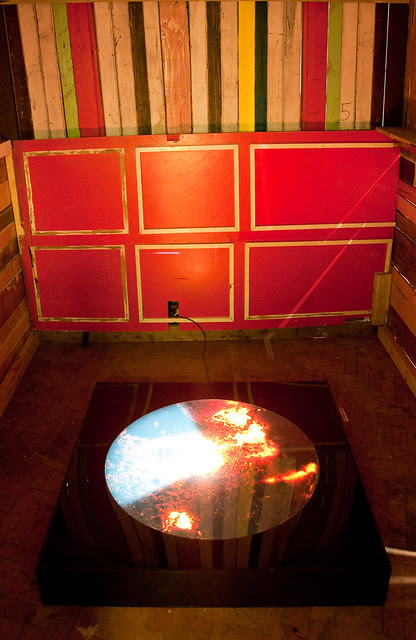 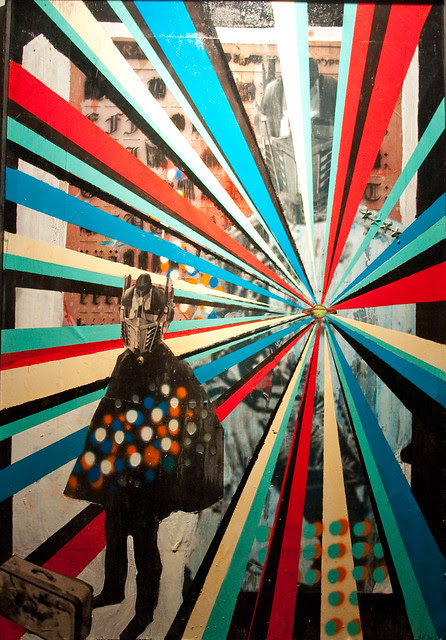 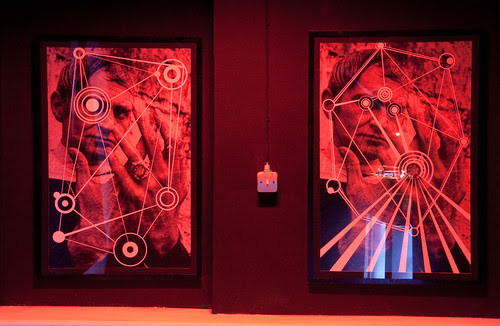 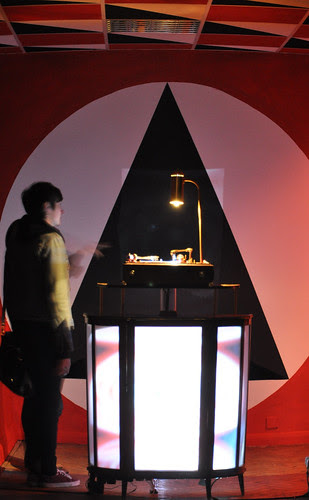 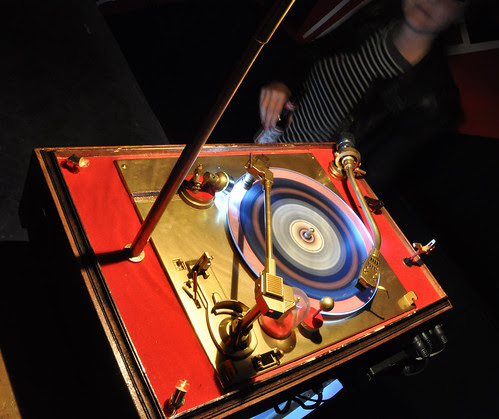 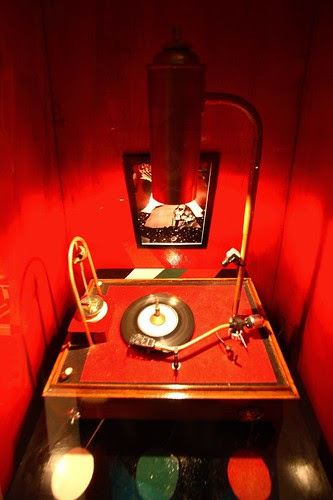 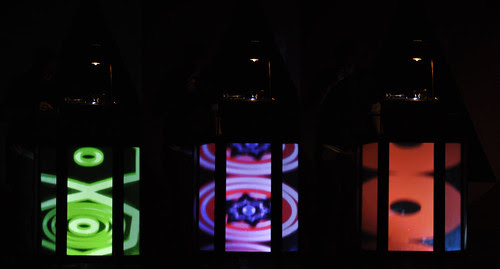 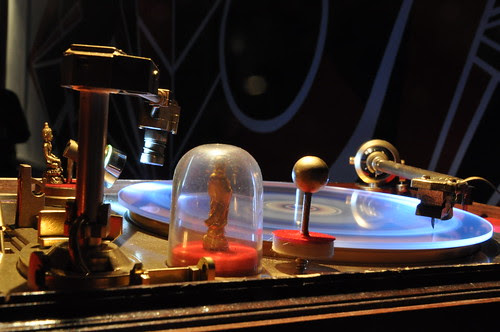 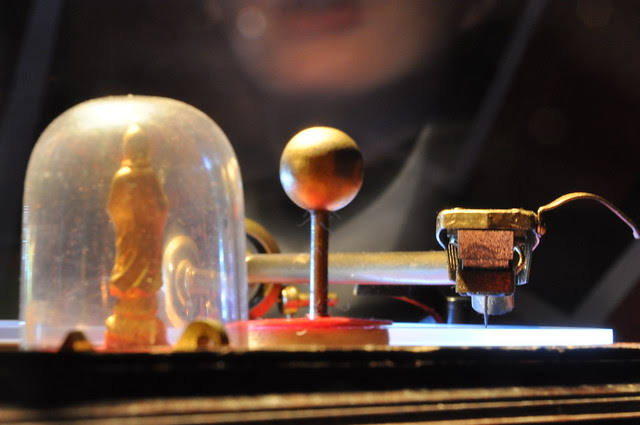 Posted by NoLionsInEngland at Sunday, April 03, 2011 No comments: