Shoreditch is full of little corners where street art survives and accumulates in layers, like a busy kitchen pinboard.  Last week one such canvas near Columbia road was transformed by, in no particular order, Donk, Skeleton Cardboard, Rider and Tommy Fiendish into this beautiful paste up collage. 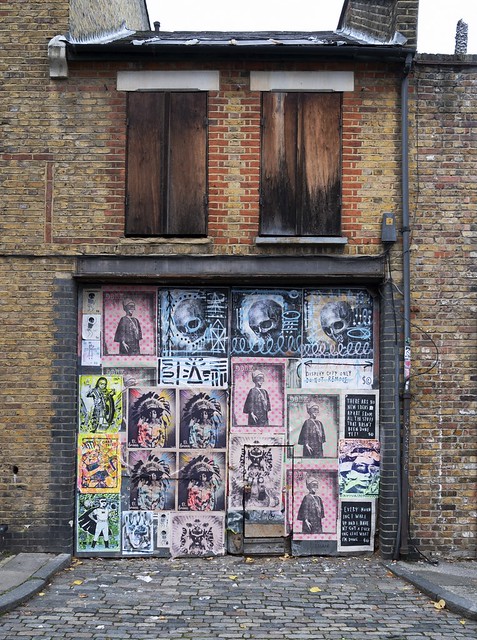 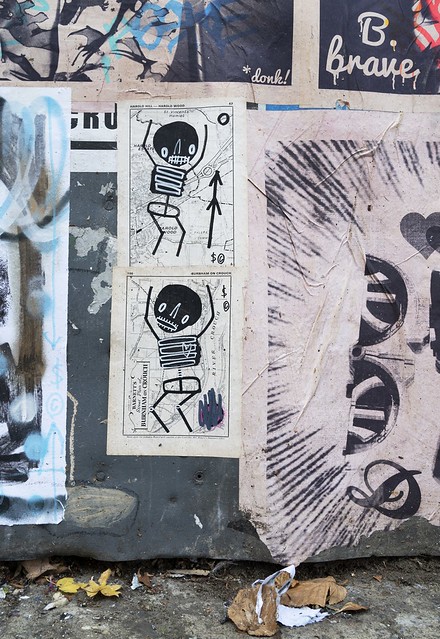 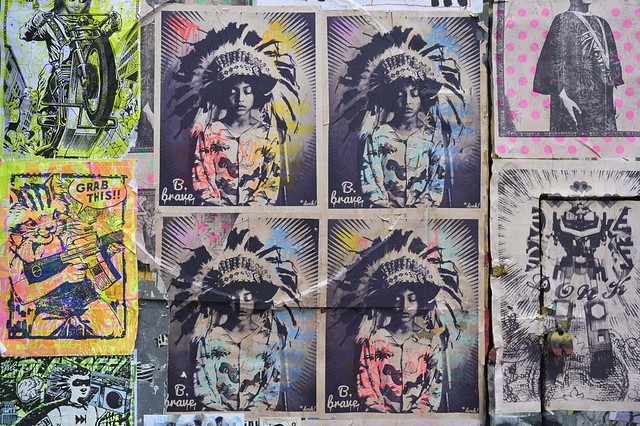 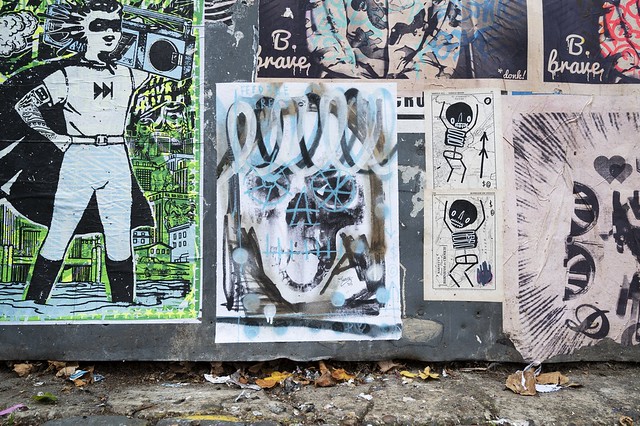 Whether neglect or tolerance is the reason why the property owner has allowed street art to accumulate, mutate and flourish on this canvas is a matter for another day but it is interesting to look at just a few examples of how the patina of this door’s surface has evolved down the years.

A year ago in November 2019 the door looked like this: 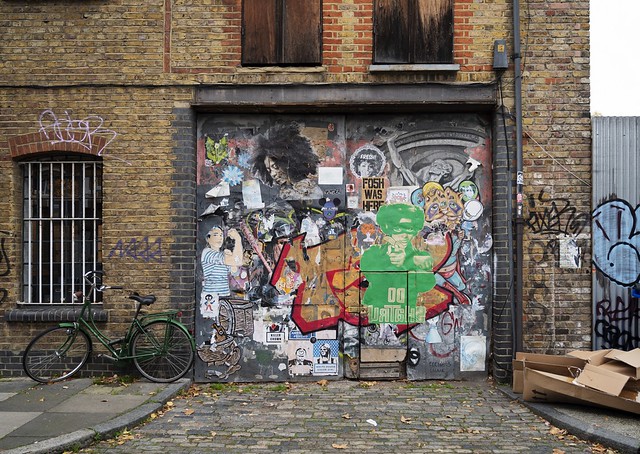 Just a week ago a fair portion of the art present in 2019 was showing a steely determination to cling on in spite of tempest and subsequent creatives. 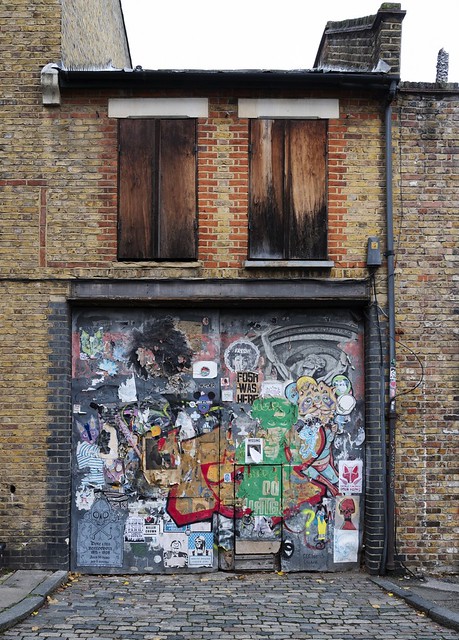 The Pyramid Oracle paste up still visible in parts in 2019 and 2020 has already lasted since 2015, thanks mainly to its height. 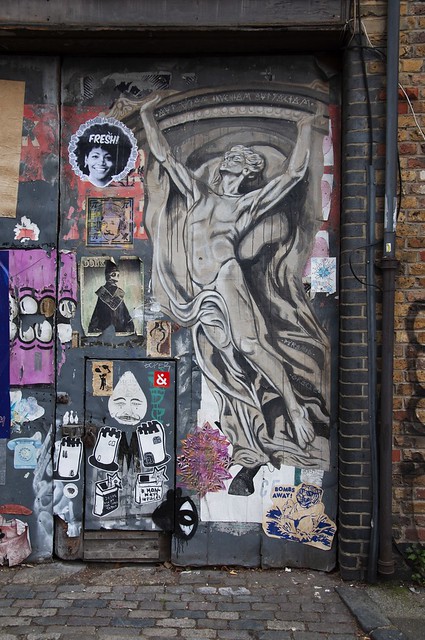 HIN was busy around Shoreditch 2012 - 2014 and if you looked at the bottom of the door in 2013 you would see a HIN character with an Aida face created from her infamous "East End Still Sucks" response to the Hackney Olympics.  That originally started out as a "go vegan" collaboration as shown in the following shot and the HIN body was still visible last week! 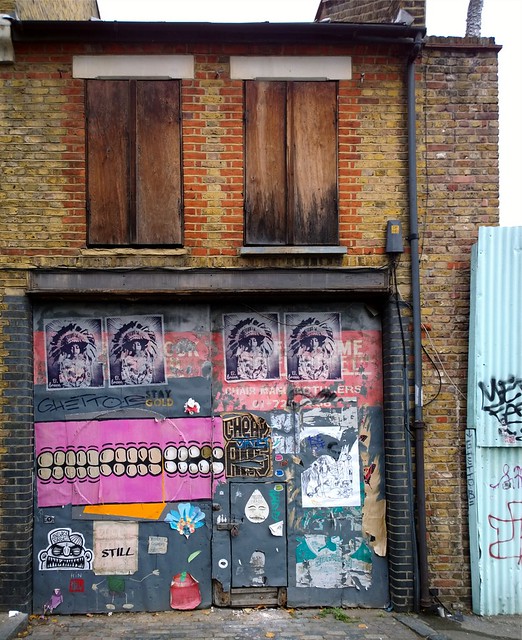 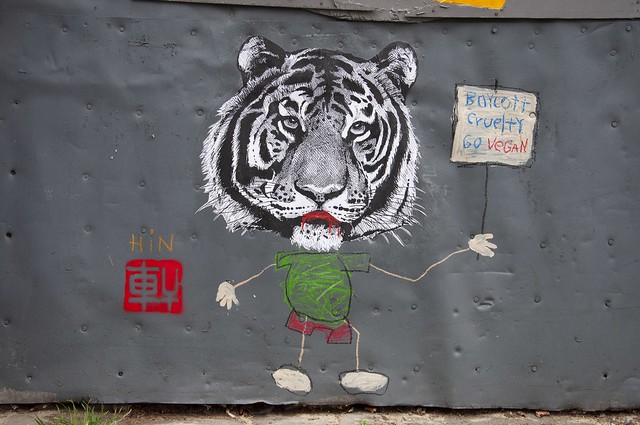 Finally, back in 2012  this canvas was one of many to host the Sweet Toof/Paul Insect street group show.  This photo also features a framed print by New York street artist Gaia in a walk on part! 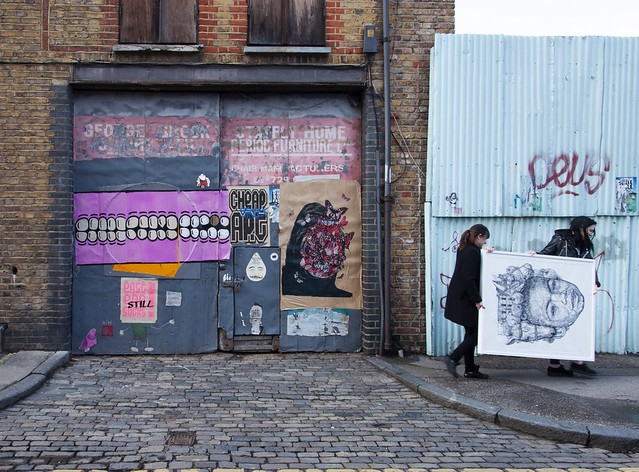 As always the beauty of the art process here is the absence of the selective and restrictive eye of a curator, an organiser.

A few years ago a permissioned wall on Hanbury Street triggered a similar “longitudinal” review of the changes time wrought on that particular canvas, click here.

Finally, if you have enjoyed this look back through a street art time machine why not put an end to that lockdown stir crazy feeling by joining the author on a tour of Shoreditch’s street art, click here

Posted by NoLionsInEngland at Tuesday, November 24, 2020 No comments: 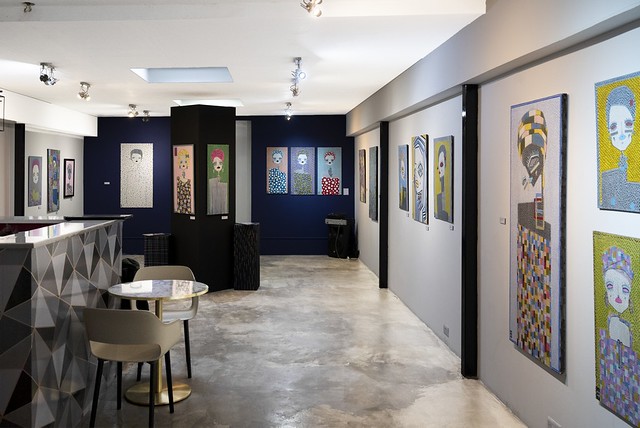 In an urban landscape where portrait street painters are overwhelmingly drawn to either the technical proficiency of photorealism or its diametric opposite cartoonery, ALO’s expressionist fisogs stand out! 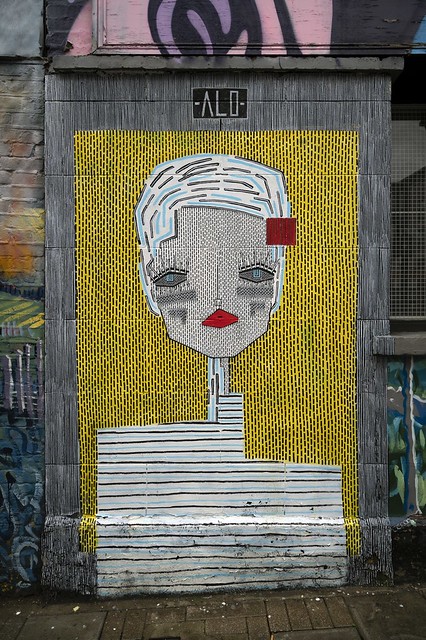 His street art career started with small paste ups in 2011 and bar a brief flirtation with Paris ALO has lived in London and consistently decorated our streets ever since. 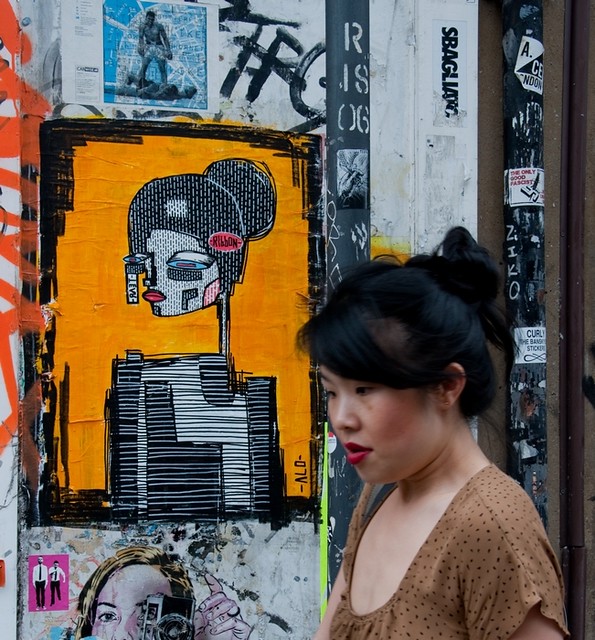 ALO paints on the streets in acrylics and markers rather than spraypaint, making his approach rather different to most street artists.  Of necessity he has to make repeated returns to a spot to apply successive different coloured layers which when a street artist is painting without permission, most of the time for ALO, requires nerves of steel and a detached immersion in the act. 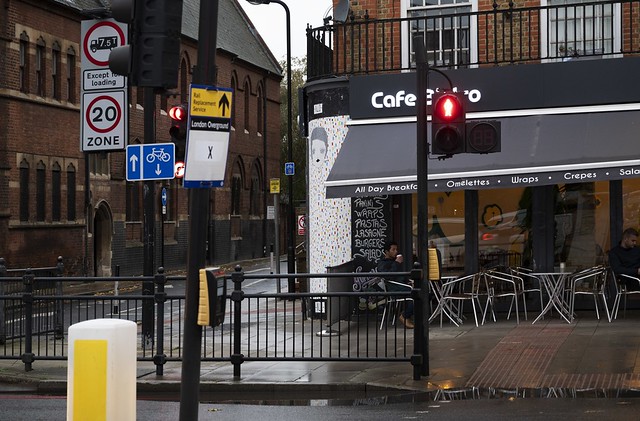 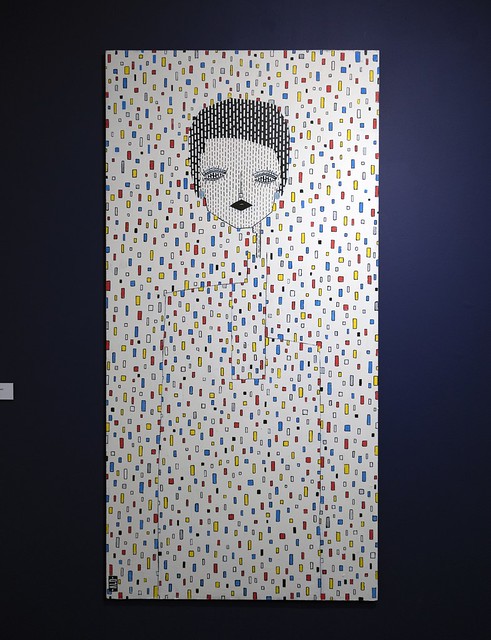 In his latest solo show characters are dressed in patchwork garments with way more colour than previous exhibitions.    Paintings influenced by African and Moroccan women stand out.   Also, Klimt has clearly been a significant influence on the latest work. 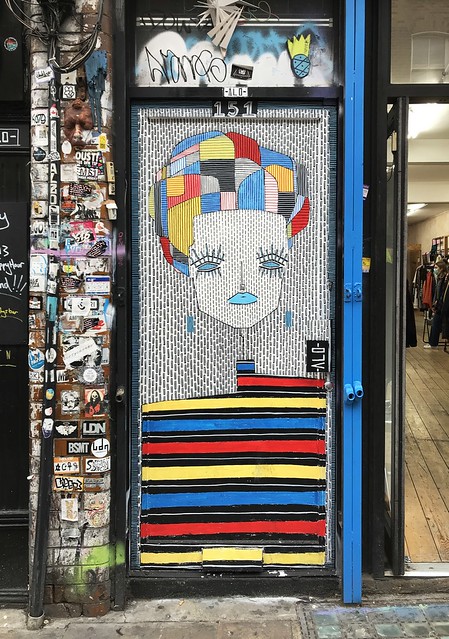 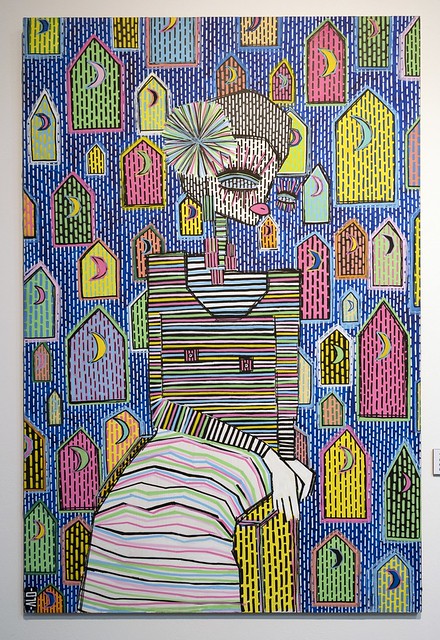 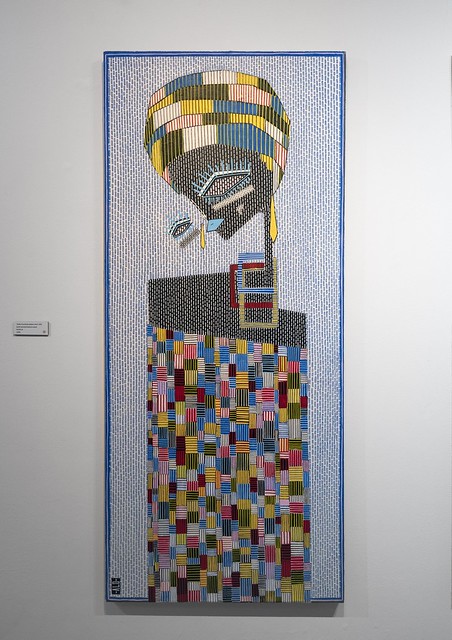 ALO: Profile Of An African Woman In Paris 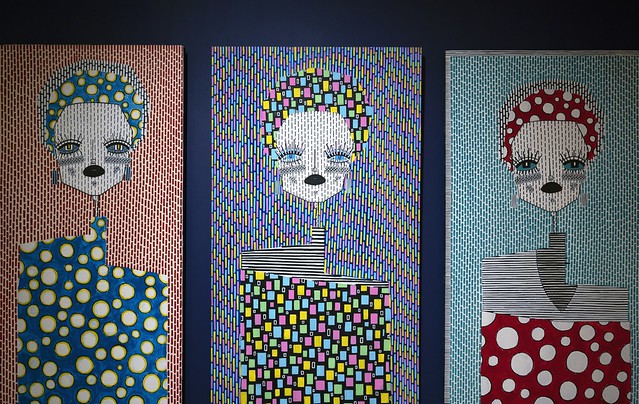 ALO’s characters don’t all engage us with a stare, but they say the eyes are the window into the soul and the direct stares of many of the faces are a thing of beauty. 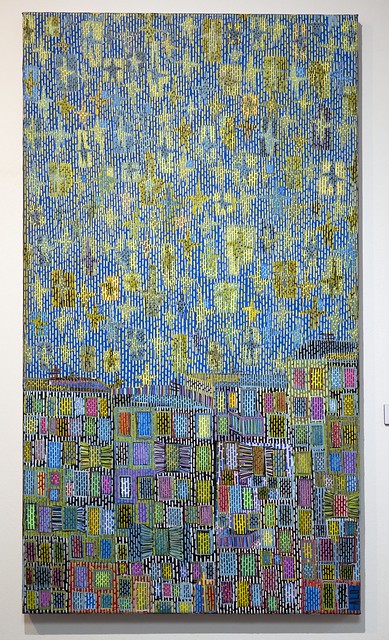 An ALO character conveys all you need to know through the accessories and the detail.  A hair band, a hat, the drip of a tear or more directly, a descriptive word block provide clues as to a subject’s style, location or state of mind.   There is less embedded text in the paintings in this exhibition but the characters are no less evocative. 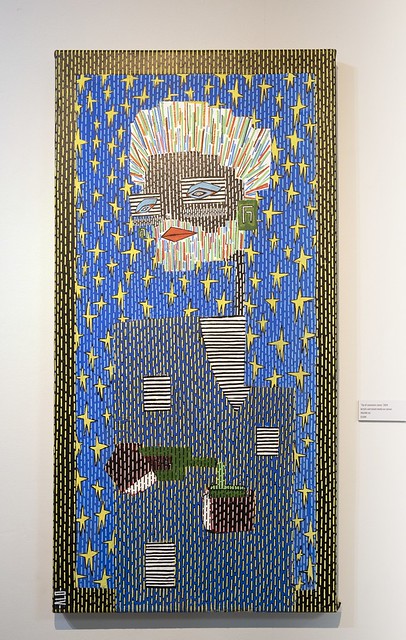 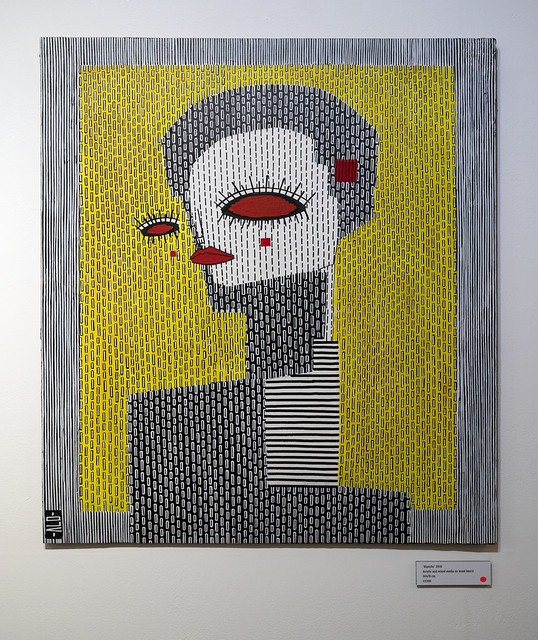 Delving into an ALO painting to ferret out what is happening is fun.   With bombs dropping from the sky and  the title “Drone”, one painting had me momentarily thinking the character was using some kind of hand controller to deal death remotely; stepping back for further contemplation it became apparent that the character was a mother cradling her baby. 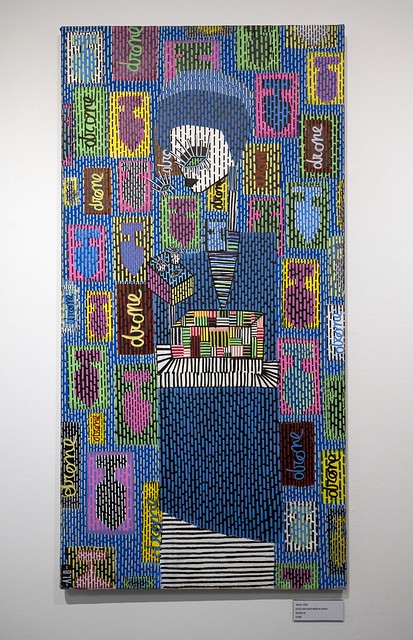 Unfortunately this gallery visit was delayed until just a couple of days before the show closed but hopefully  you get a sense here of the awesome ALO show the champions of the urban art world BSMT Gallery have staged. 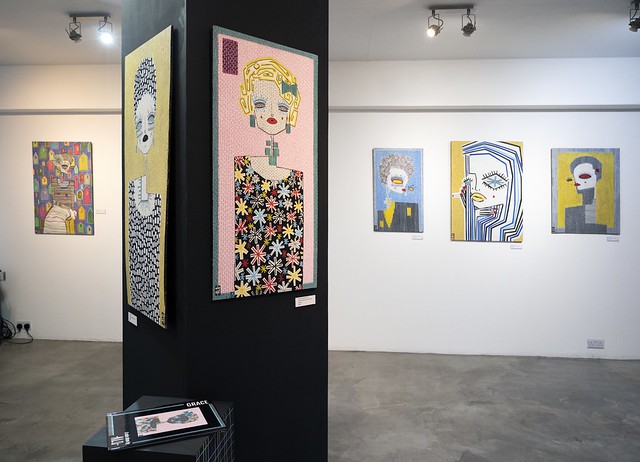 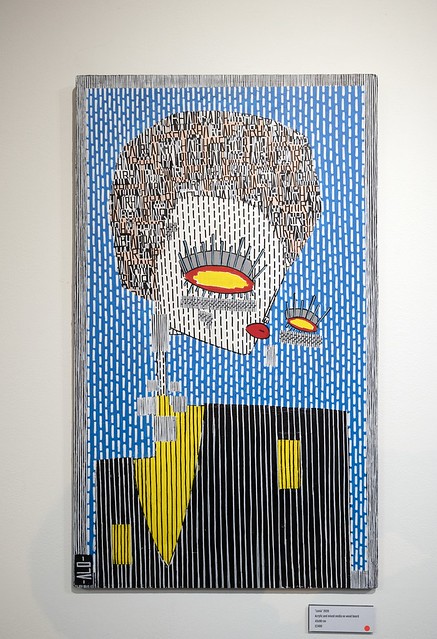 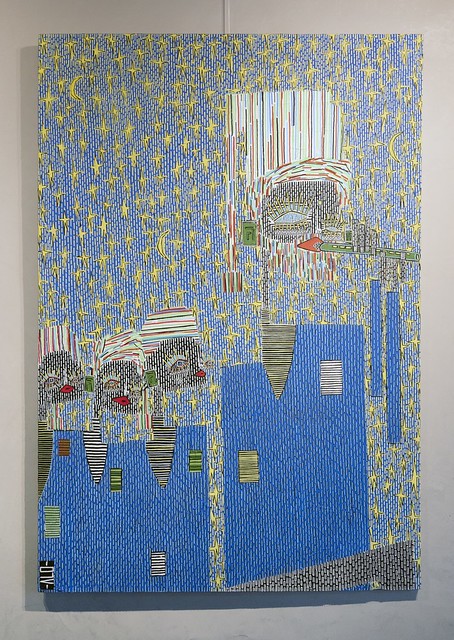 Posted by NoLionsInEngland at Tuesday, November 03, 2020 No comments: