Stencil artist Penny has captioned his Rook and Raven solo show “Economy of Scale”, it could just as easily have been “Hand Cut” as this description applies to every image on show and blistered, bleeding fingers must be entry price for producing Penny’s stock intricate multi layered paintings 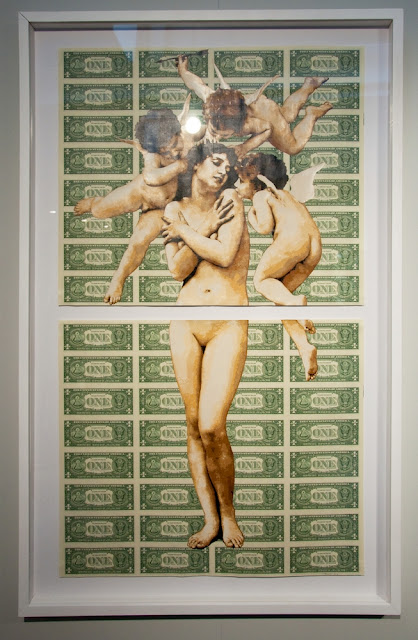 Alice Before The Fall, 10 layer stencil on 64 dollar bills

I don’t know if Penny stresses too about simulating a link with the still trending street art vibe.   There have previously been some rather generic Kate Mosses stencilled on outside walls [WRONG - see comments] but this homage to Albrecht Durer’s praying hands down near Brick Lane from about 9 months ago bore a closer relationship to the art Penny has created for this show.

The first thing that stands out is that if you are used to a diet of Banksy, K-Guy and Stewey’s Stencil’s then you won’t have expected anything like the detail, intricacy and graduated toning of Penney’s work.  About half of the work has been produced using 7 or more stencil layers, there is a defect in our language if we are forced to use the same label to describe Penny’s and Mr.Farenheit’s work. 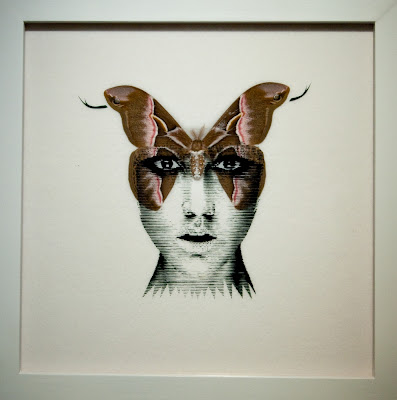 If Penny has one trait which might be described as an alignment with Banksy it may be an element of humour in some of the pieces.   A lot of the stencils are drawn on the front and reverse of paper currency, old one pound notes and dollar bills and the gag is delivered with the title of the work, including the “Penny Pusher” series in bronze, silver and gold seemingly touching on the Olympic theme dominating the landscape of London this, referencing the huge expense required to stage this sporting fete as Europe tips back into recession and currencies look doomed to fail.

Maybe Euro notes would have potential for future memorabilia value as we drift inexorably towards the neo drachma and the nouveau Franc. 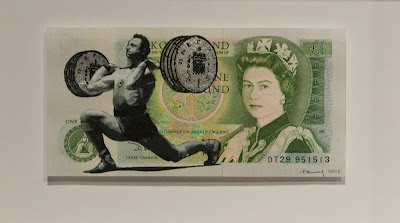 Many people have made an exhibit of themselves with one or two layer stencil images on canvas.  The more adventurous throw in a bit ofspraypaint “hand finishing”, or as Banksy’s film showed us,  in Brainwash’s case you put them all on the floor and ride your wheelchair around while flicking acrylic in the air.   Penny goes the extra distance to embellish the routine stencil image, such as creating a masque’d femme fatal with a stunningly iridescent and REAL butterfly. 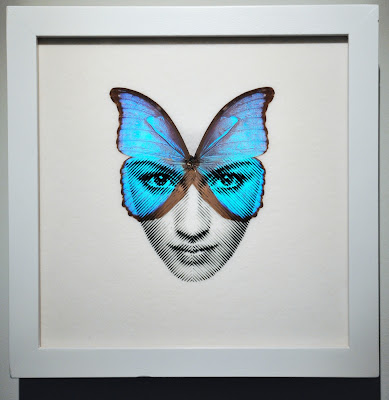 Penny has another novel use for stencils up his sleeve which is to frame the stencil layers alongside the artwork, the effect of depth and cut is a bit like those dissected antique books you see around, we love the effect of the layers, sadly that doesn’t show in the photo below which completely flattens the strata. 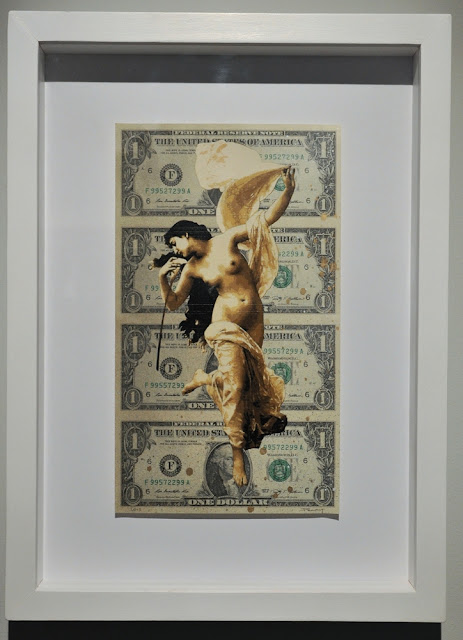 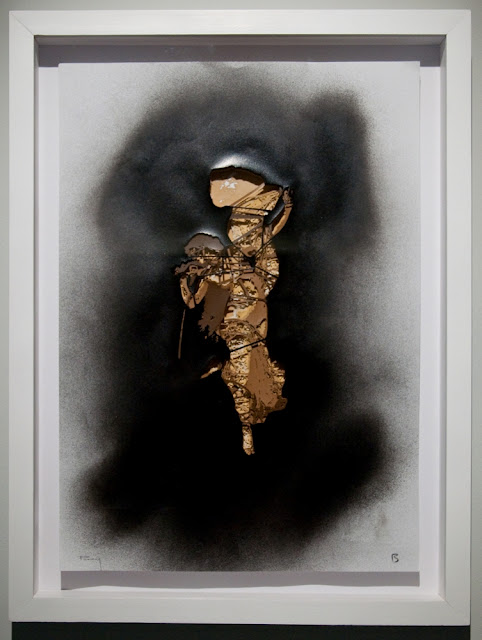 And for completeness, a couple of installation elements gave an element of interactivity, by rolling pennies in the machine you might get a Penny badge out of the hopper, couldn’t get near the thing for all the obsessives thrusting their coins into the slots. 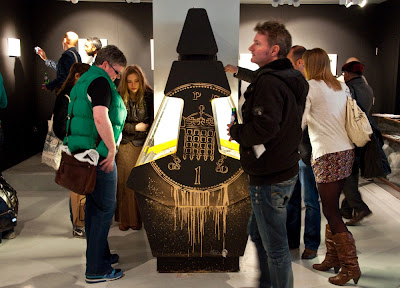 These “Penny Shop Pick and Mix” pieces invited you to select your own personal combination from 5 eyes, noses and mouths on dollar bills to make you own preferred Penny face combo.  The idea is that the choice is from an open ended but signed edition for the duration of the show.  For a mere £31,250 you could have one of each of the 125 different possible combinations and perhaps the artist could be persuaded to stencil a “CERTIFIED INSANE “ piece as well. 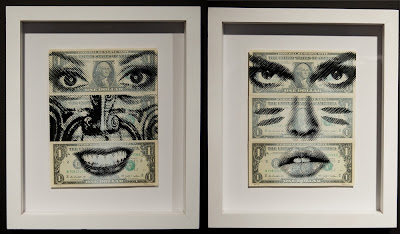 The list for the pictures has the word “hand cut” against every single stencil image.  Penny is telling us he is a Master.   No prisoners,  no  short cuts.  On the end of Penny’s arm a very calloused exacto finger is plotting its revenge. 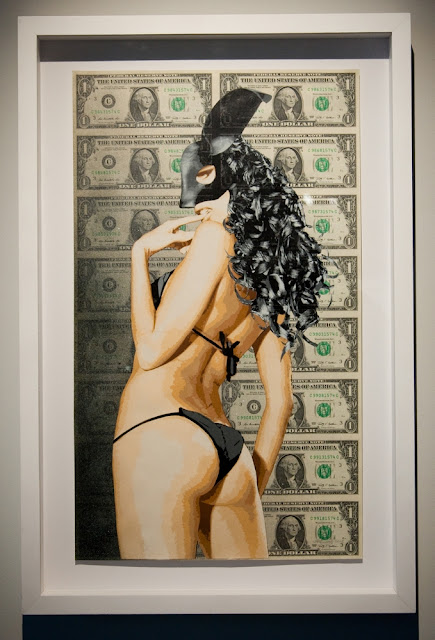 There has been an excess of reference to Banksy in this post but any artist operating in the stencil space has to contend with the enormous shadow that Banksy throws over the genre.   Rook and Raven is a large upstairs and downstairs space which must be a daunting challenge for an individual artist but there isn’t a crap image in sight, they’d all pass muster as fine art if drawn or painted by any other technique.     Then you remember this is stencil work and you have to admire the quality and intricacy of Penny’s use of the form. 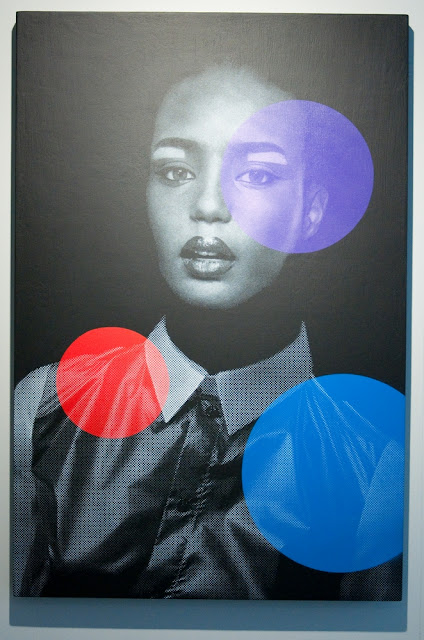 Iris In The Dark
Posted by NoLionsInEngland at Sunday, May 20, 2012 3 comments: