Stick 'em Up (Portland vs London)

London is constantly blessed, honoured and privileged to receive visits from street artists from foreign shores and our scene is enriched by their creative mischiefs. Since last weekend a group of artists mainly hailing from Portland, Oregon have been absolutely caning London’s walls. The artists now represented in strength in London are Arrex skulls, Voxx Romana, DRSC0, Pamgoode, Sike 1 and Tenet, all from Portland apart from Melbourne’s Tenet who hooked up with the Portland Group (for that is what I feel inclined to call them) here in London.

Arrex is a regular visitor to these shores and is a leading sticker artist using a skull motif as the basis for his colourful and surprisingly varied stickers. New cranial variations seen this time include a surreal 4 eyed skull and a very Sailor Jerry inspired sticker beautifully slapped onto a very relevant sign. 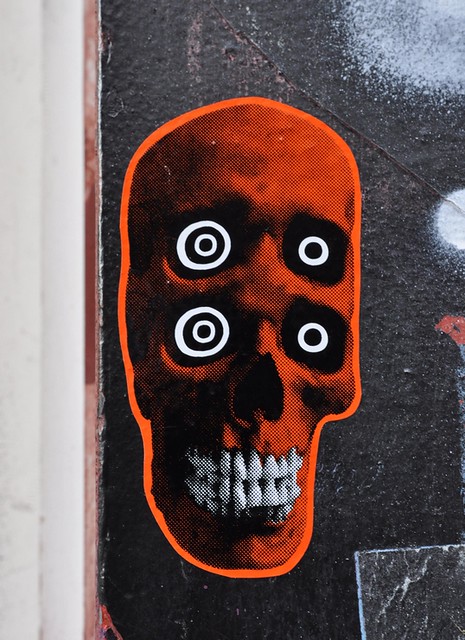 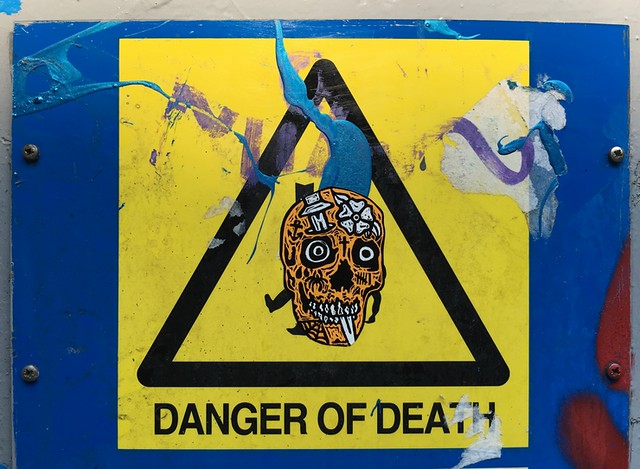 
A new direction so far as Arrex’s wall decoration in London goes are paste ups, though the skull remains ever present. 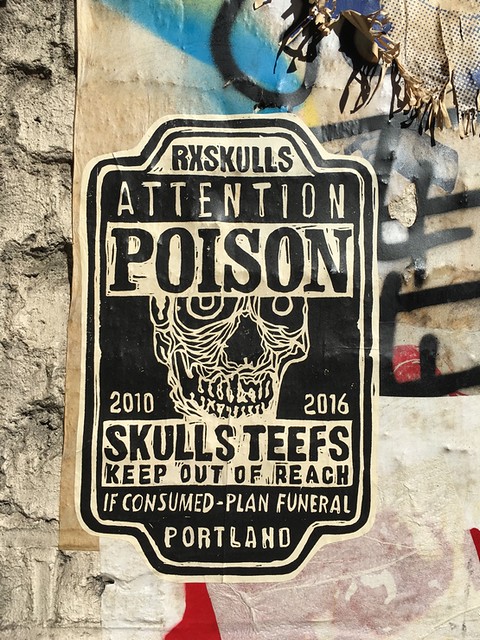 
Arrex has also put up a whole bunch of stencils, again we haven't seen this aspect of his practice in London in the past. Smaller stencils employ convention bridges in hanging details like the eyes, these give the skulls a robotic cyborg kind of appearance. Larger stencils though adopt the mesh mounting technique, perhaps that's an American thing. 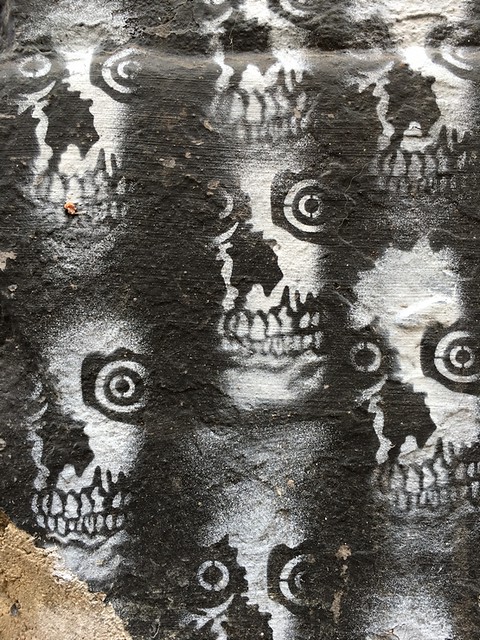 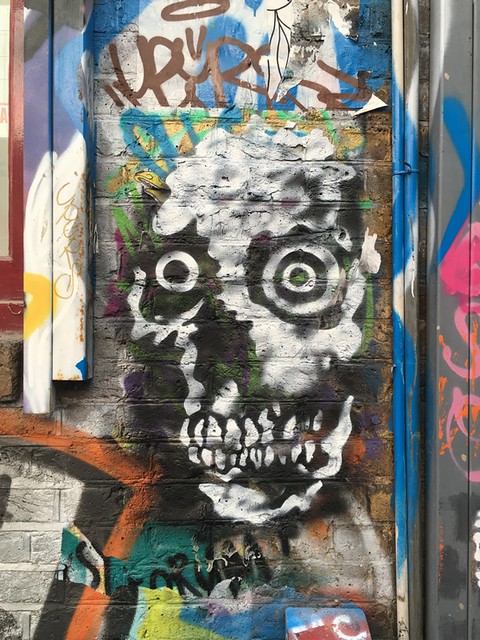 
Voxx Romana’s Einstein-in-a-helmet motif has regularly appeared on London’s streets, this time is no different, the cheeky little specimen below is a transparent sticker hiding it’s black image against a black pole, you’ve got to have your special street art night vision peepers fully operational to spot a self effacing sticker like this! 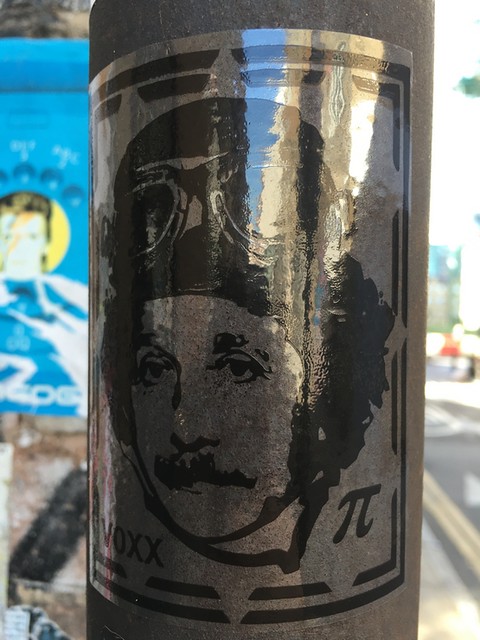 
Voxx Romana paste ups have appeared here in the past, one thing that must give Voxx Romana and Arrex Skulls a special tingle is finding that numerous specimens of art from their previous visits are still visible in certain select locations. This new example is stenciled onto an original map lobbed by Voxx's local library. 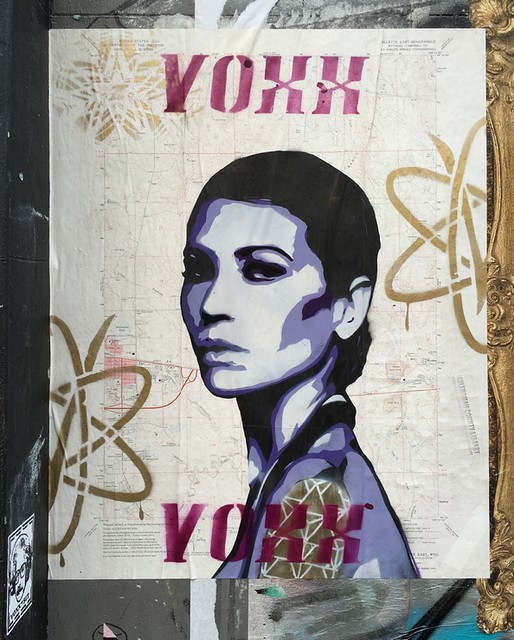 
Another little gem from the Voxx Romana treasure hunt is this curious two colour sticker on a transparent background. At first glance it looked like two single layer transparent stickers one over the other but on closer inspection it reveals itself as a two colour transparent sticker with an offset registration, ‘cos that s the kind of thought that pops into your head when you look at stickers, innit? 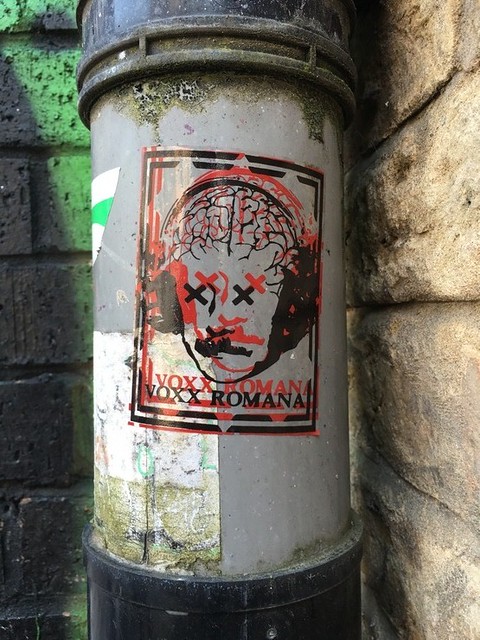 
DRSC0 has also gone down the sticker and paste up route. The first couple of DRSC0 paste ups sighted went up on Saturday evening (ok, some time between Saturday morning and Sunday morning) but suffered pretty swift scragging. Maybe the eyes offended a religious sensibility, certainly the quadruple eyes thing can be a bit disconcerting. By Sunday morning the damage to one of DRSC0’s paste ups had been partially made good with a little spray painted filling in. 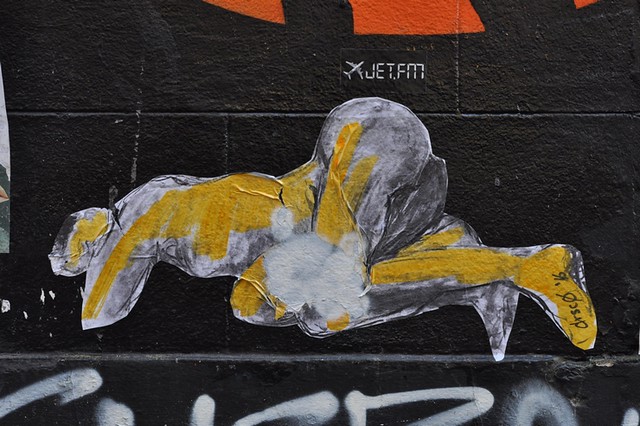 
Street art soars when it has site specific relevance and DRCS0 has taken two flayed man stickers (ok, maybe I have spent too much time immersed in Game Of Thrones this year, quite possibly they are medical illustrations) and created this tiny but wonderful homage to Stik’s treasured Brick Lane couple. 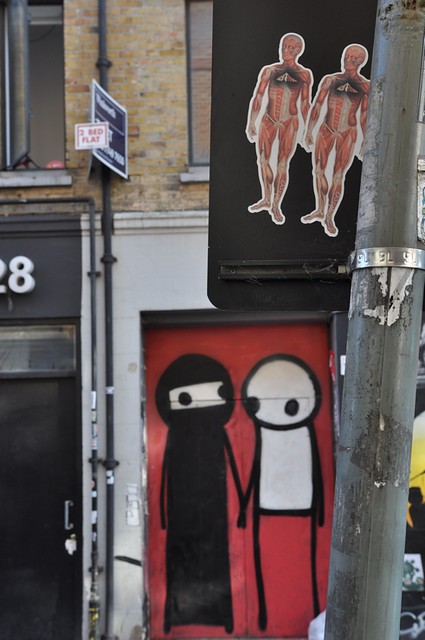 
DRSC0 has also deployed stencils, like Arrex favouring the mesh mounting approach, visible if you look closely at this image of a sunrise over a mountain peak. 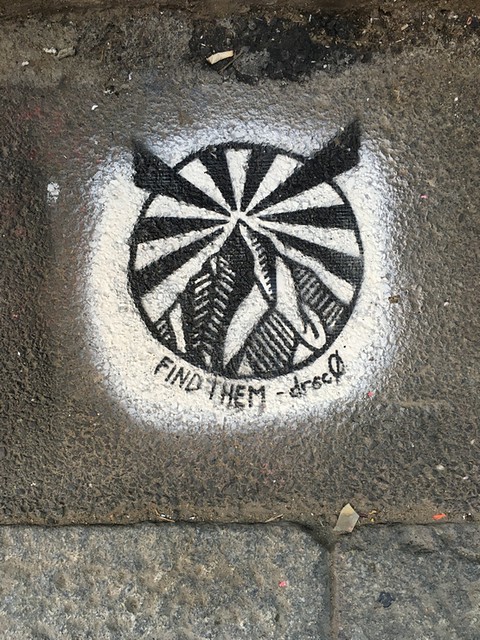 
Tenet, repping Melbourne, reinvents and rediscovers quotes from the ancient wise; pearls of wisdom and vintage photos of crusty warriors, philosophers and revolutionary anarchists who lived and learnt all that meaning-of-life-shit long ago and whose messages remain valid today. 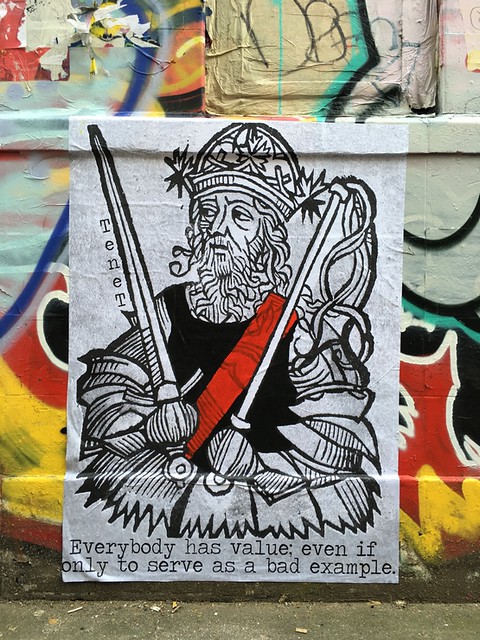 
The Russian philosopher and anarchist Mikhail Bakunin (rather than the later restatement attributed to Picasso) is the source for “The urge to destroy….” 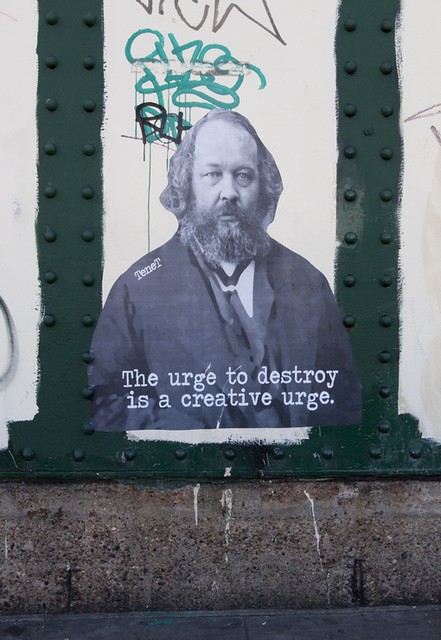 
Emma Goldman was also a noted early 20th Century anarchist once impressively dubbed “the most dangerous woman in America”; when street art prompts you to google online biographies and learn something – that’s mission accomplished. 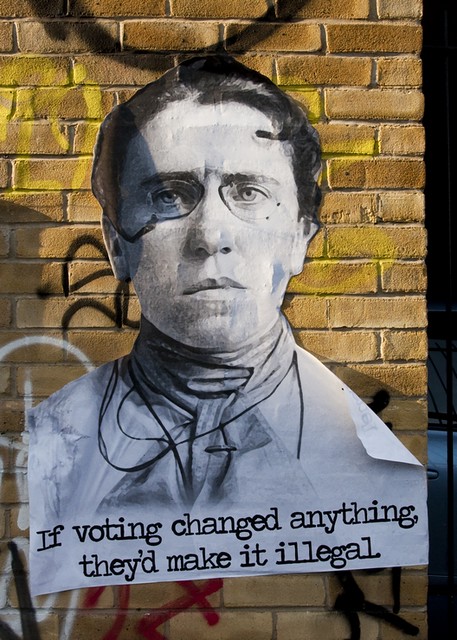 
Pamgood2, also from Portland, spies on us from the walls. Her photorealistic mono-eye and a sternly furrowed eyebrow are surrounded by lurid coloured splats. It’s like we are on the wrong side of a peephole in a spraycan test facility. 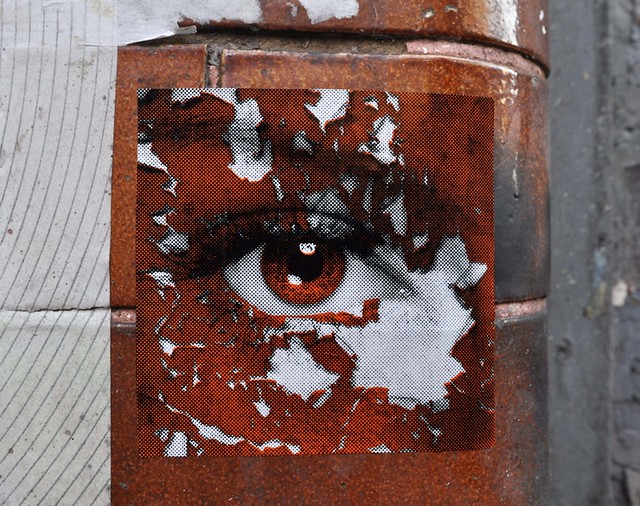 
Another artist representing Portland is Sike1 who has put up stickers and some paste ups in Shoreditch, on the stickers the art was very gothic and gloomy looking, on the paste up it still looks gothic and gloomy though at the larger scale the curious goat skull/5 branch candelabra/hooded female figure in undies composition is easier to see, who knew Death’s handmaiden looked so attractive. 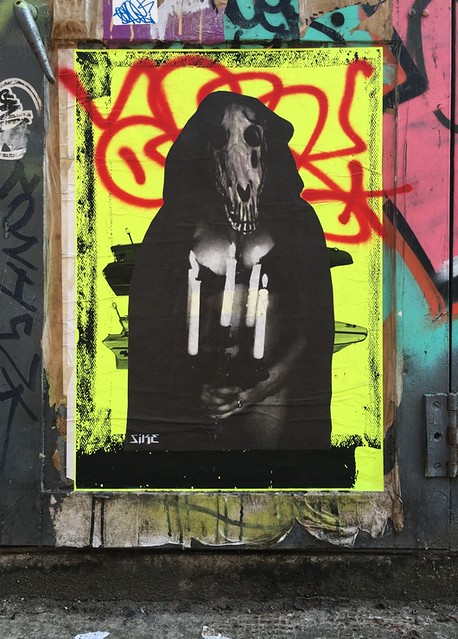 
While Arrex and Voxx Romana have both had significant representation on London streets in the past, on this occasion there is a further dimension to the Portland Group's visit, a very short group show at the ever interesting BMST Space in Dalston. Several of London’s (umm..a definition of London extended to embrace Brighton and Birmingham and other up North spots) street artists are exhibiting alongside 5 sons and daughters of Portland (note Mad1 from Portland also in the show, street art output not yet discovered by this scribbler). This is open for a limited 3 day period from Thursday 15th to Saturday 17th of September so don’t delay, hurry and get along to see how this curious geographic face off works indoors. 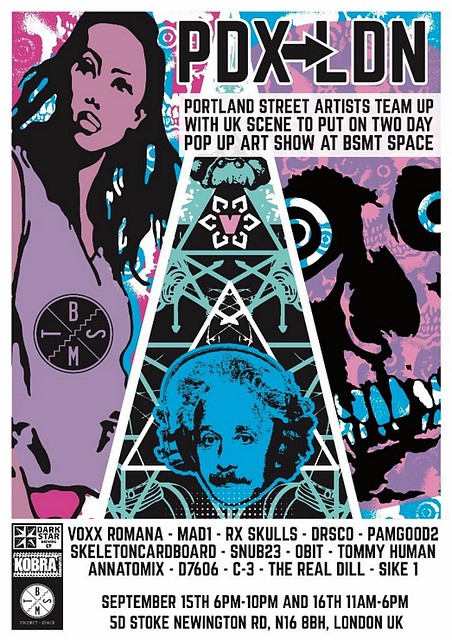 
What is evident in the work this group has put up in the space of a few short days is their energy and the evident enjoyment. Life has no greater thrill than the adjustment of the urban landscape in the company of like-minded friends and this brotherly – and sisterly – band have taken to our urban surfaces with glee. Participation in the Portland>London face off in the gallery may be their reason for coming over but in the battle on the streets, Portland has taken a sticky grip on our walls in the past few days. 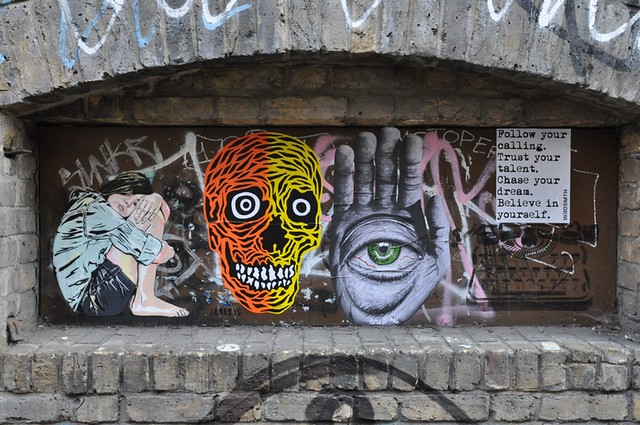 The tardy protracted creation of this blog post (each day as I approached a conclusion, these blighters put up even more work that caught my eye) means that I have just returned from the show and that exuberant energy that has marked their cutting a swathe across London's walls transports itself into the gallery. The artists are to a soul personable and friendly creatures and I understand that they will all (the Portland Group faction at least) be present in the gallery on Friday evening (16th Sep) as well, for those of you reading this in time. 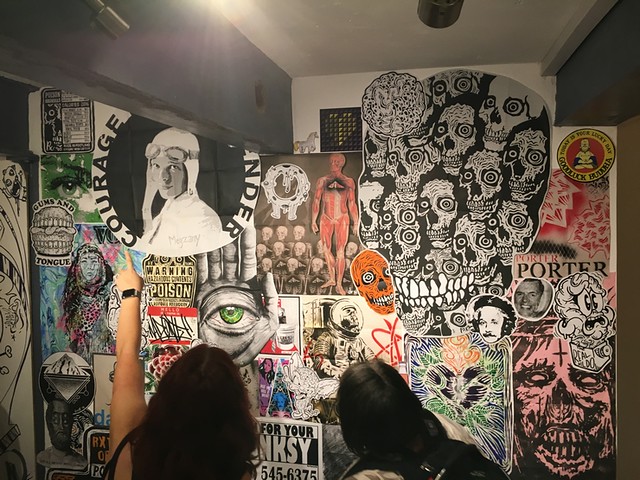