The Start Of The End - ODDO, MCLN, Savant and DaddyStreetFox


ODDO and fellow street artists Savant, MCLN and Daddy Street Fox have a group show at Monty’s Bar and it is fascinating to see what they get up to when freed of some of the “issues” or perhaps limitations of outdoor walls.

Oddo has a particularly varied range of street art styles, mainly all leaning towards the sinister. 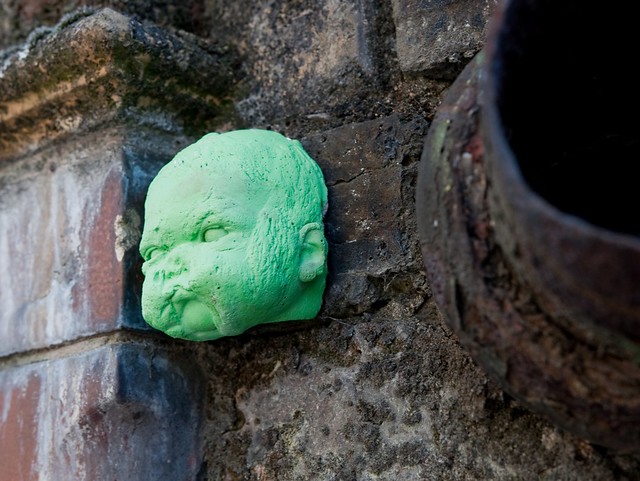 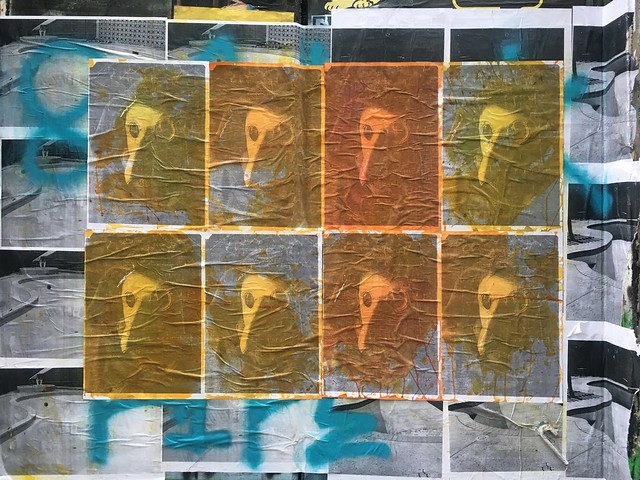 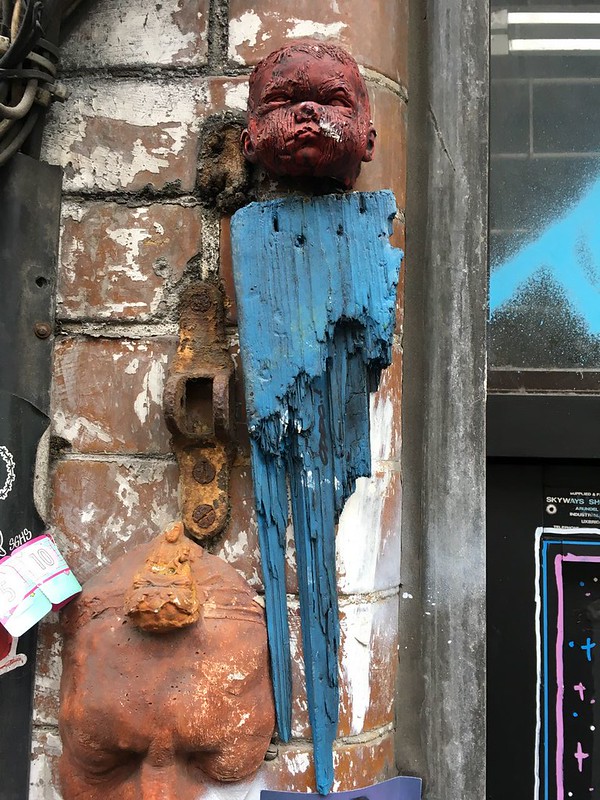 
Indoors Oddo pretty much replicates the breadth of styles but really amps up the dark, warped and bizarre. Introducing the hairy babies! They look spooky on the streets, they are awesome in the rough sculptural creations in this show. 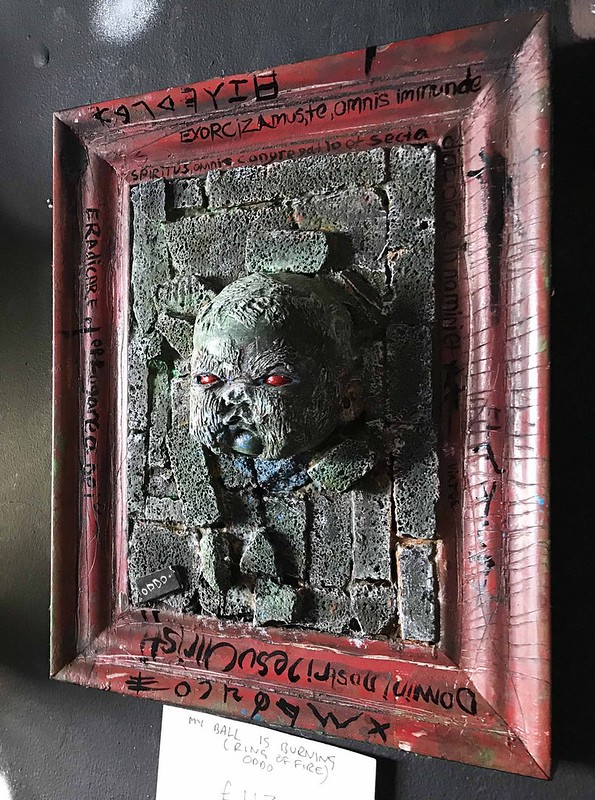 ODDO - My Ball Is Burning (Ring Of Fire) 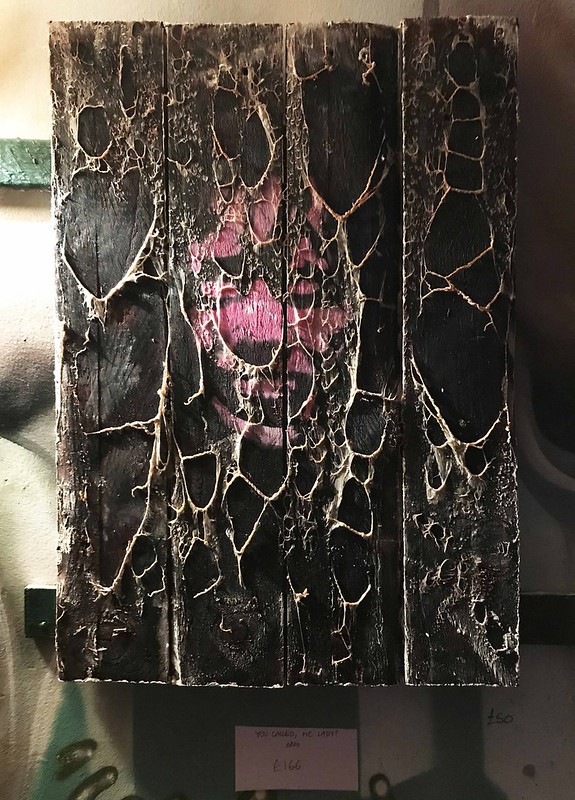 ODDO - You Called, Me lady? 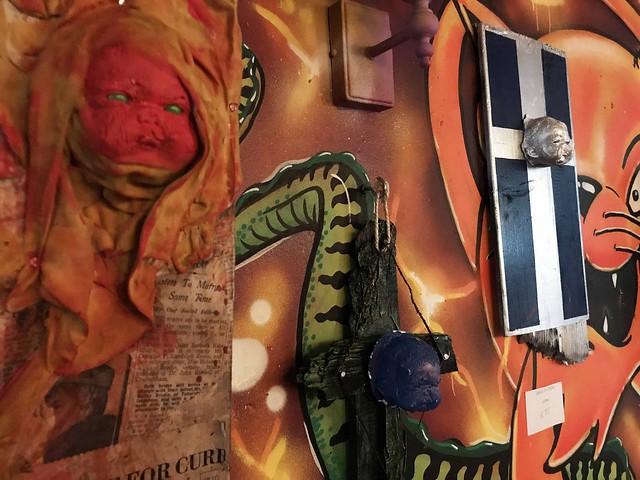 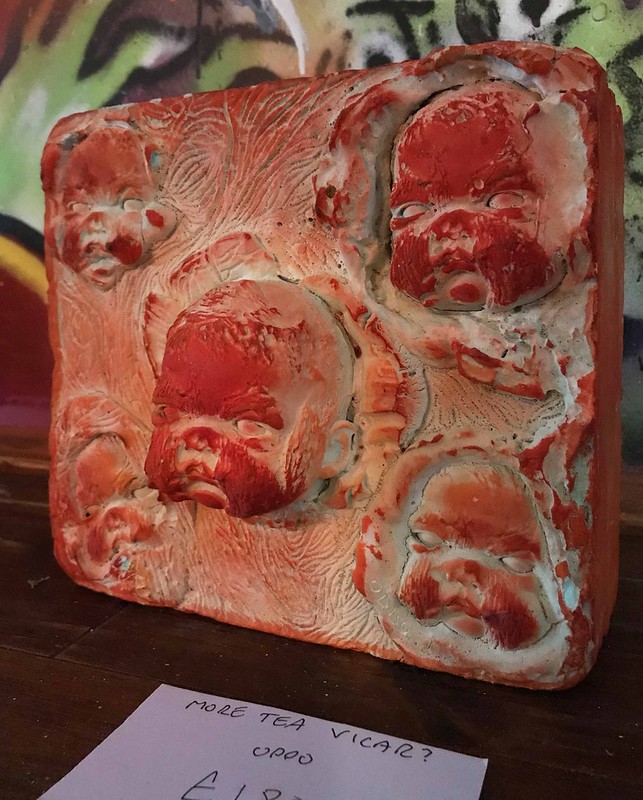 
Many facing the Start of The End might be inclined to experience religious awakenings or religious conversions and a lot of Oddo’s characters appear in gloomy hoods, I had often attributed a sinister demeanour to the characters but in the context of this show we read a monk-like appearance. 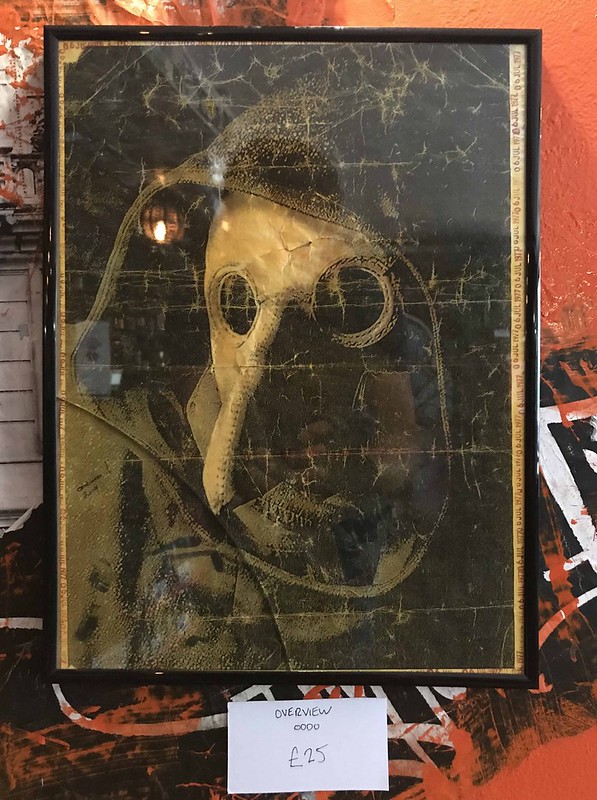 
Framed works on paper serve to underline how faithful the street paste ups are to Oddo’s indoor art. 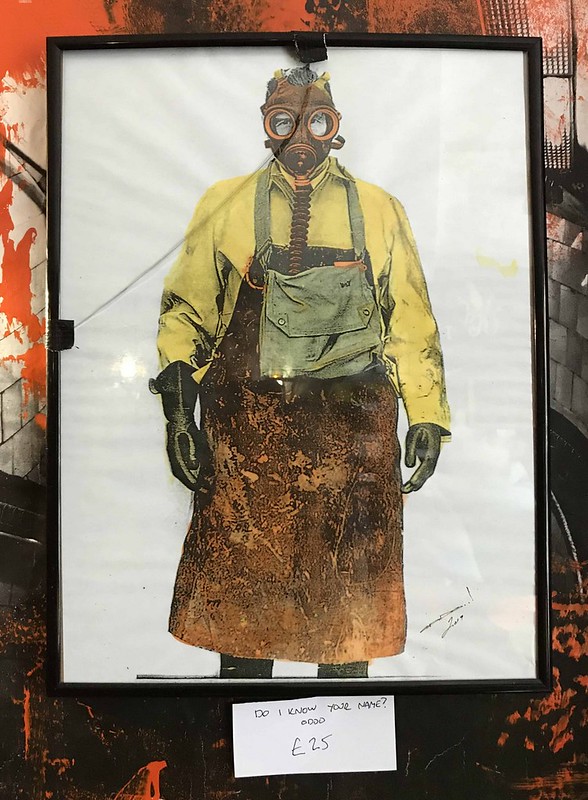 ODDO - Do I Know Your Name? 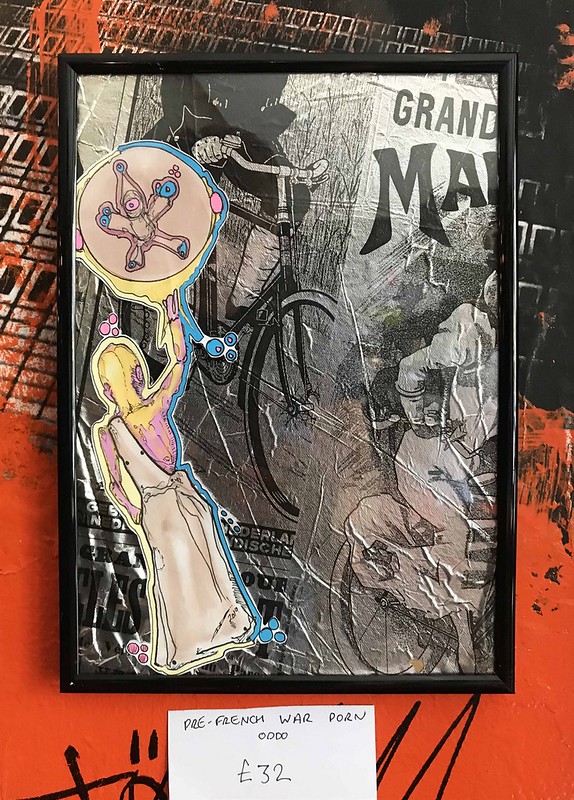 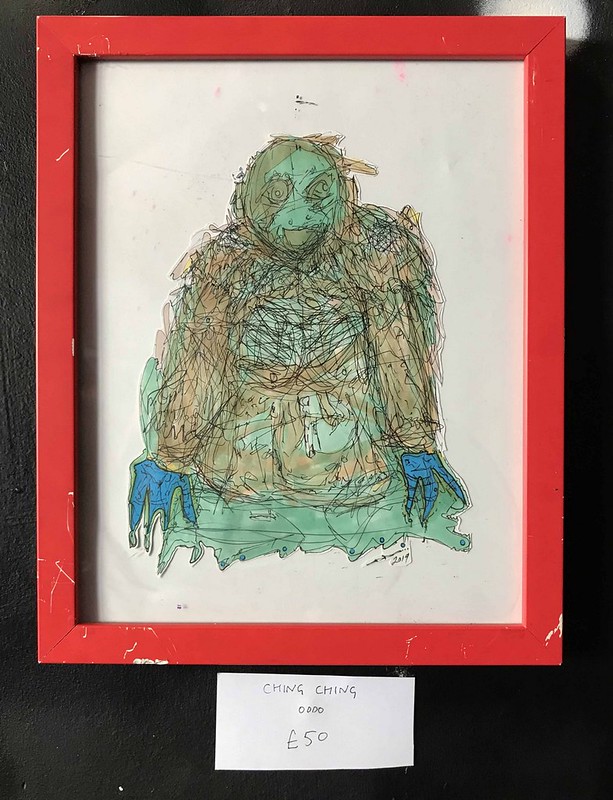 
There is a curious symbolism possibly present in the DaddyStreetFox art originating in the gothic religious overtones. The Start Of The End is nigh perhaps?  DSF’s contributions have a direct line from the layered collages in frames in the gallery to the photos of the collages as seen on the streets. 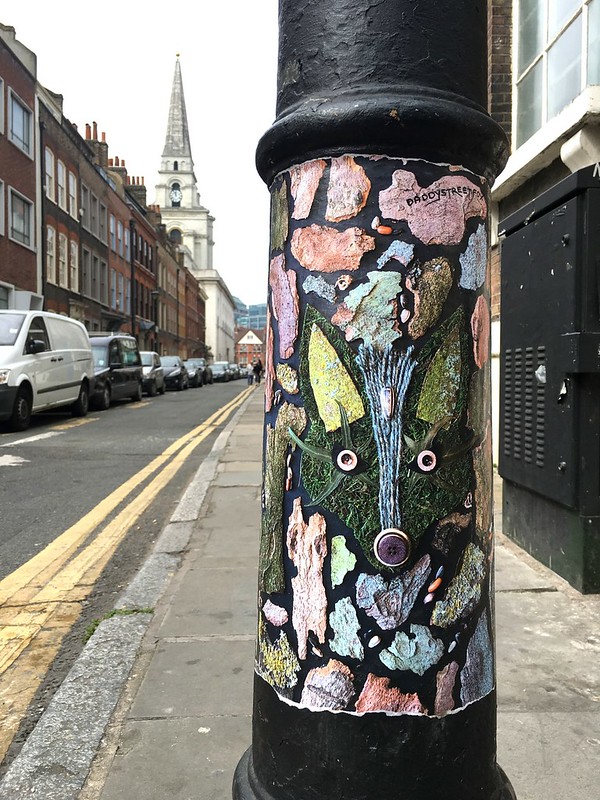 DaddyStreetFox - From The Wood (Brick Lane paste up, 2018) 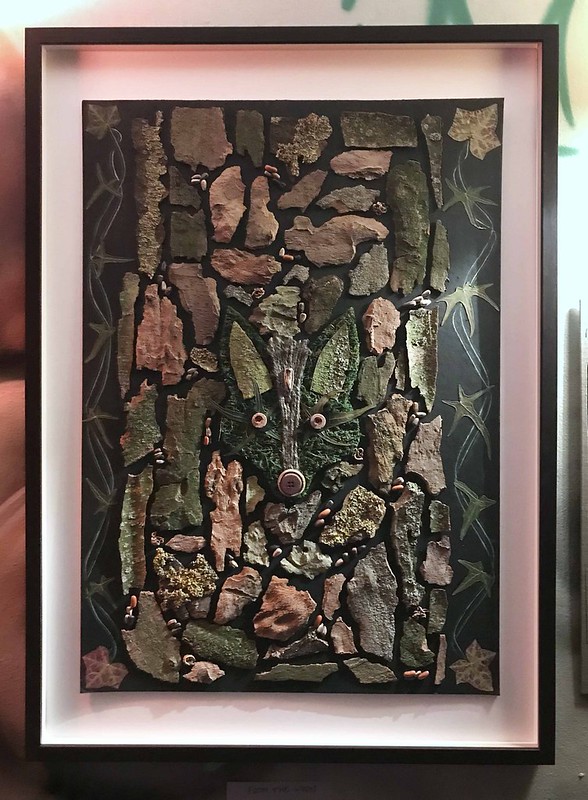 DaddyStreetFox - From The Wood (collage)


The fox frequently appears dressed as a priest or perhaps a choirboy while the stunning colours resemble a church stained glass window. Stained glass windows perform a range of functions beyond merely permitting the entry of muted colourful tones into a church, they denote patronage and wealth, they are a mechanism by which sinners seek favours to turn left on passing through the pearly gates and they promoted the religious indoctrination of a largely illiterate congregation. The ecclesiastical fox appears in stain glass windows from as early as the 14th century and has been interpreted as a criticism or accusation of slyness or hypocrisy in the church. 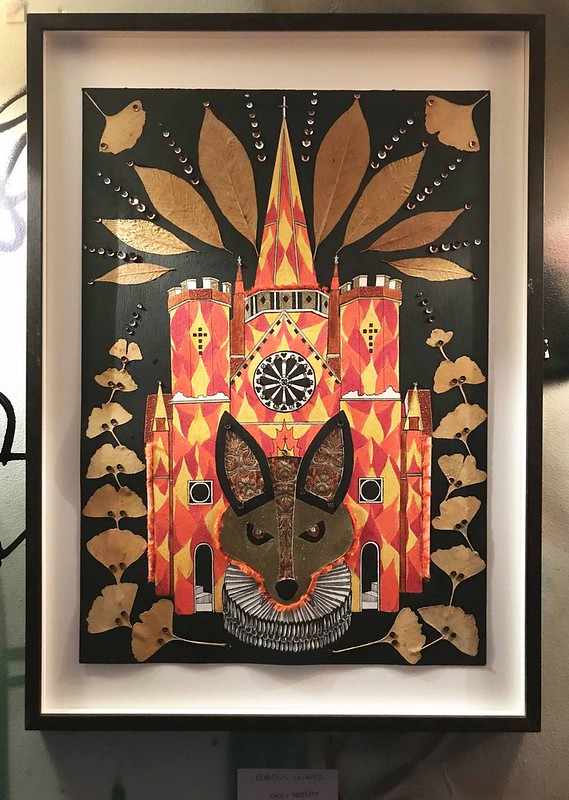 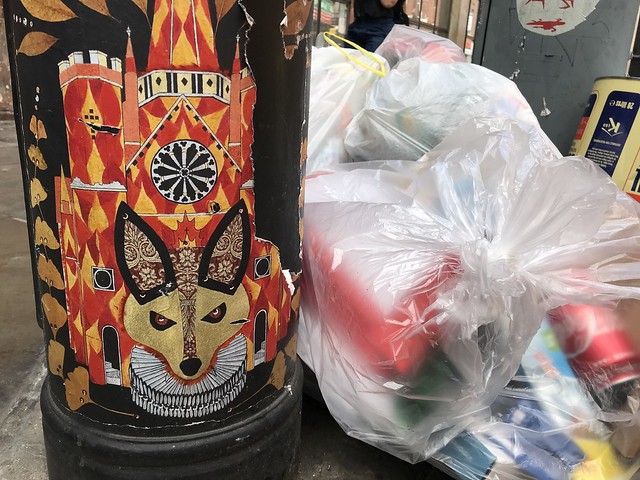 
The preaching fox is also to be found on misericords in some old churches, misericords are small lips on the front edge of a hinged church seat which when the seat is raised allows the user to perch partially seated on the lip, a bit like those bum cushions on the Bakerloo line. Some of those old wooden misericords in ancient churches were formed as elaborate decorative friezes and the preacher fox was sometimes there as a kind of jocular warning. DaddyStreetFox’s foxes never look comical or avuncular. 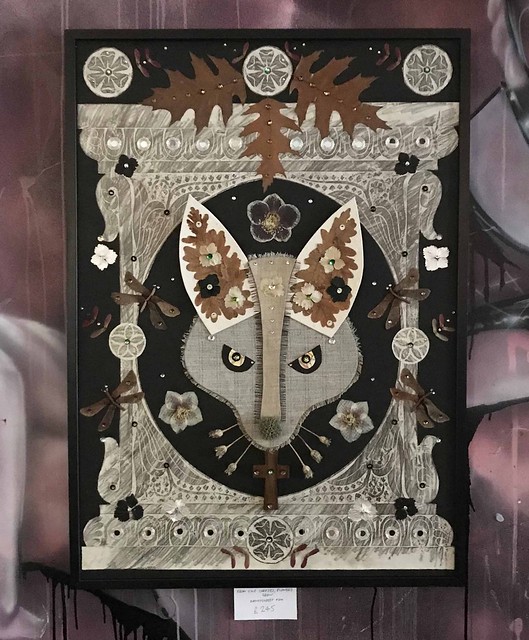 From The Corpses, Flowers Grow (collage) 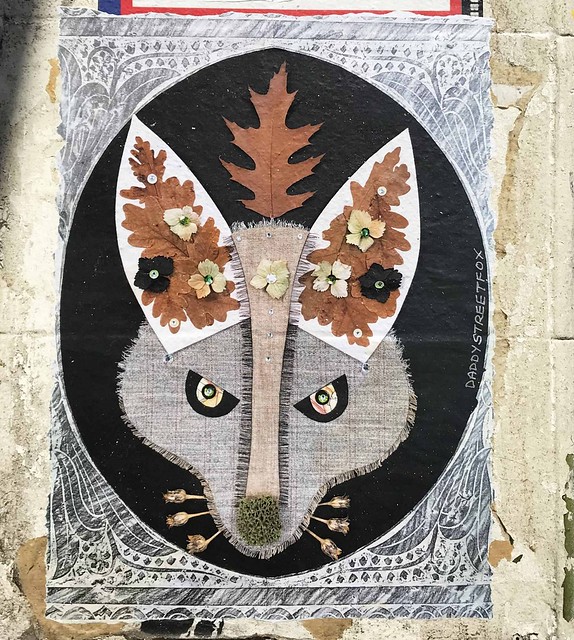 DaddyStreetFox - From The Corpses, Flowers Grow (paste up, Brick Lane 2019)


It’s a “possible” symbolism because there is large probability that this is nothing to do with Daddy Street Fox’s artistic inspiration.

MCLN’s plague doctor has been a charming and occasionally emotionally charged character that has decorated Shoreditch walls for several years now but the artist appears to have embraced other characters this year. 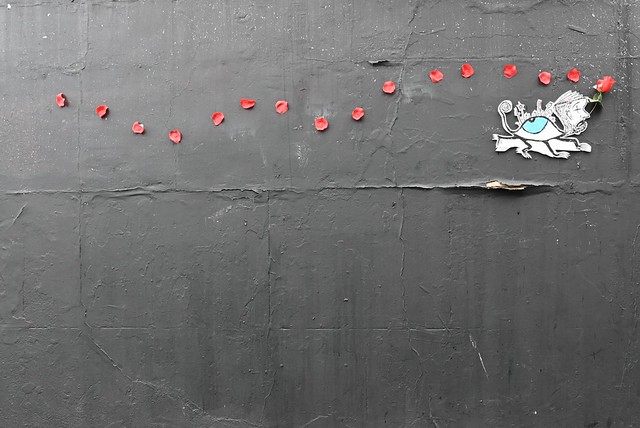 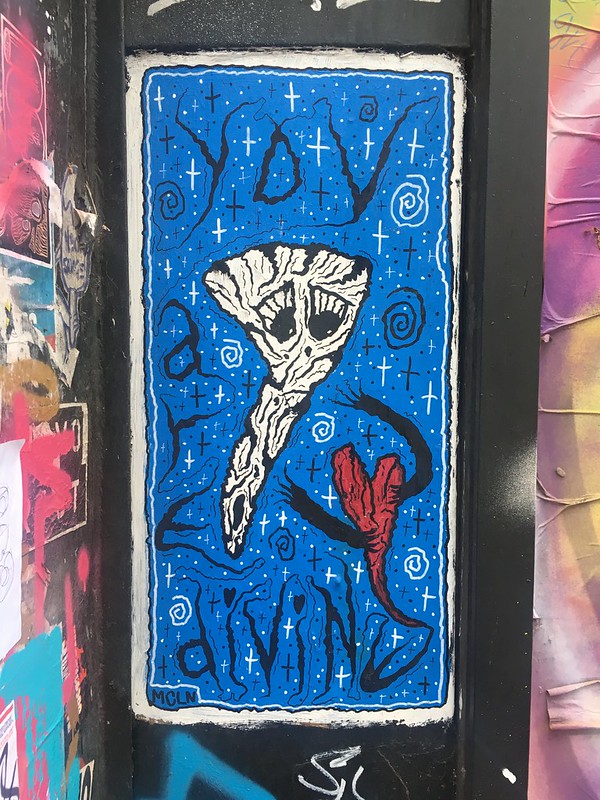 
I once made up an interpretation of the changes in the appearance and demeanour of the plague doctor liking it to the possible arc of the plague doctor's love life and by implication, that of the artist. This was complete fiction and bore no resemblance to the artist’s true love life at all!  A new MCLN character has emerged, a battered face rooted to the ground by a pedestal which appears organically to be grow into the head. Dark clouds hover overhead; life, money and religion (again) is symbolised in monuments and various detritus, truly this character does seem to have reached the end.  Mosques, crosses, churches and pyramids all link to Matters Of Meaning. 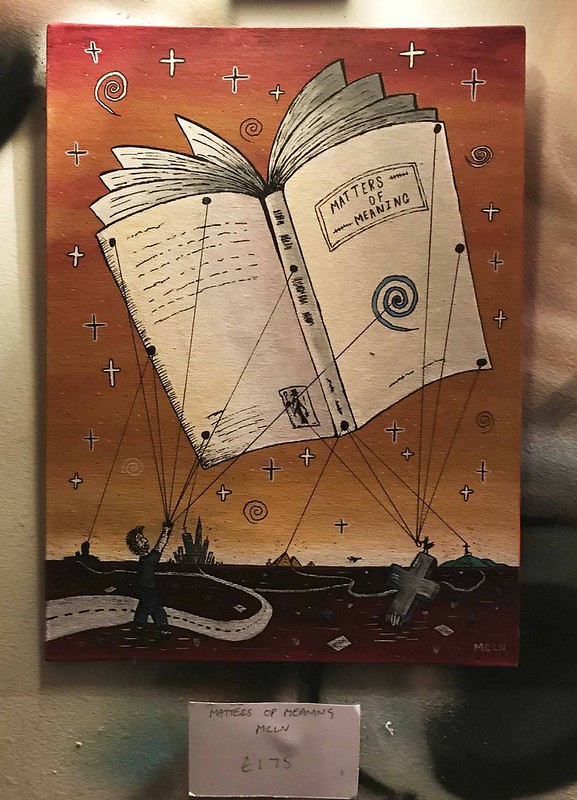 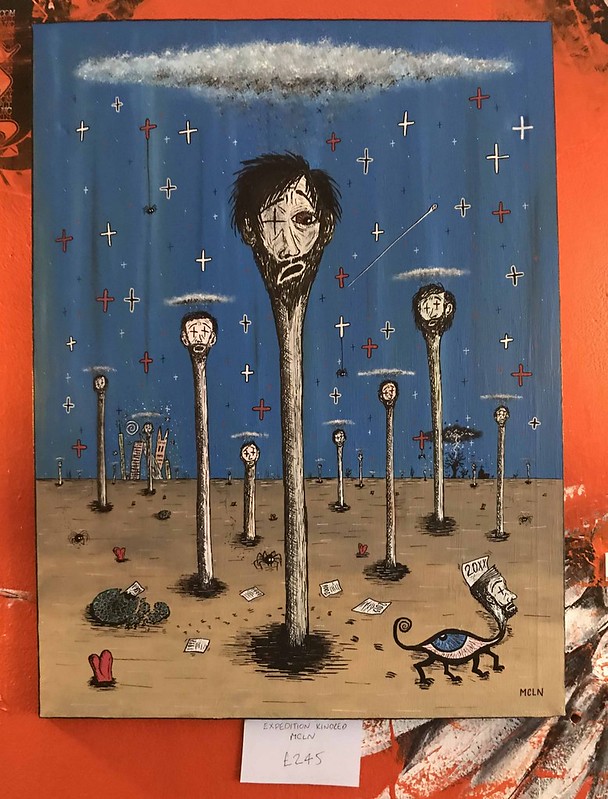 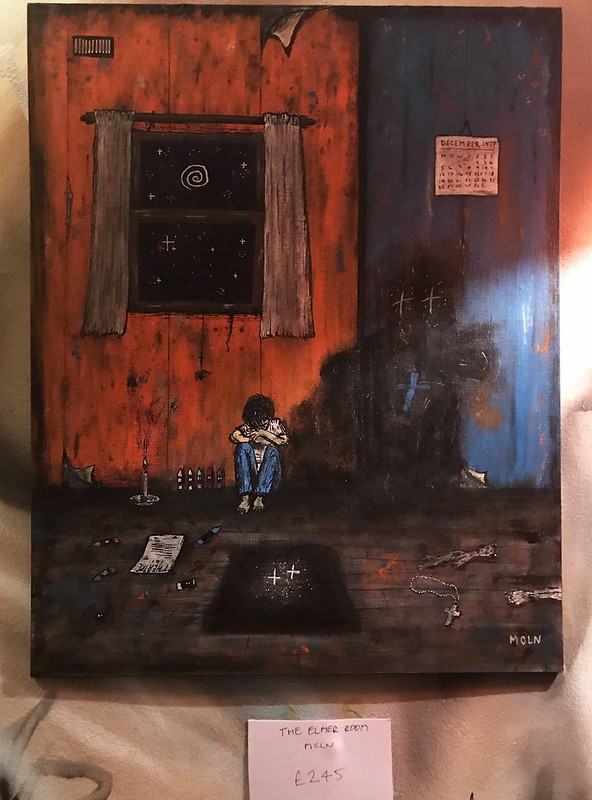 
Savant is one of Shoreditch’s more prolific street artists with a reputation for complex imagery populated by ghosts, themes of darkness and death in a surreal Dadaist style utilising collages of text and imagery. 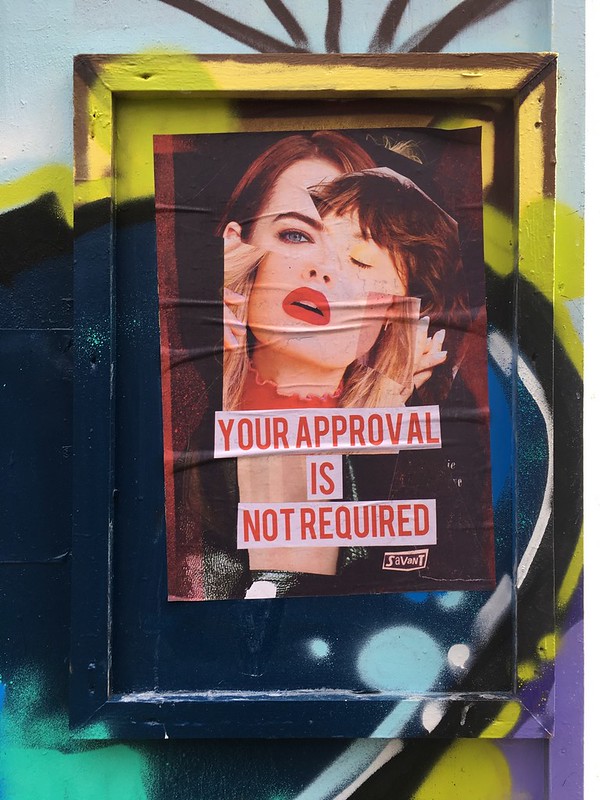 
Intriguing and easy to like, Savant’s art translates well into the theme of the show and the company it is keeping.  Thankfully our favourite wasn’t for sale as temptation is notoriously difficult to resist. 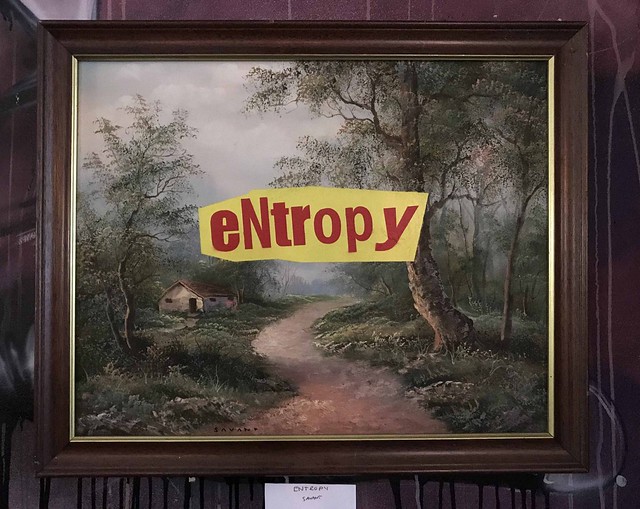 
Graffoto has always had a penchant for art hosted in rather more distressed locations than the typical art world white box gallery, think Pure Evil Gallery and BSMT Space. This show is hosted by Monty’s bar which has built a reputation over the years as a great bar and an art programme reliably tapping into the more intriguing street artists , that kind of creative energy that thrives below the level of permissioned murals and art collectors flipping the art in the big auction houses which is not uncommon among some “jet set” street artists. The Start of The End taps perfectly the Monty’s Bar ambience and that is a good thing. 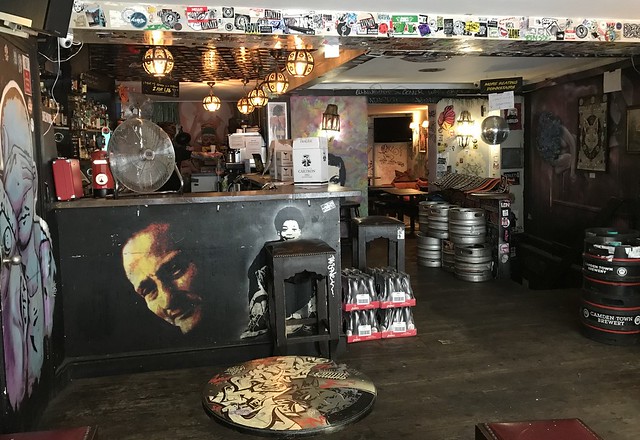 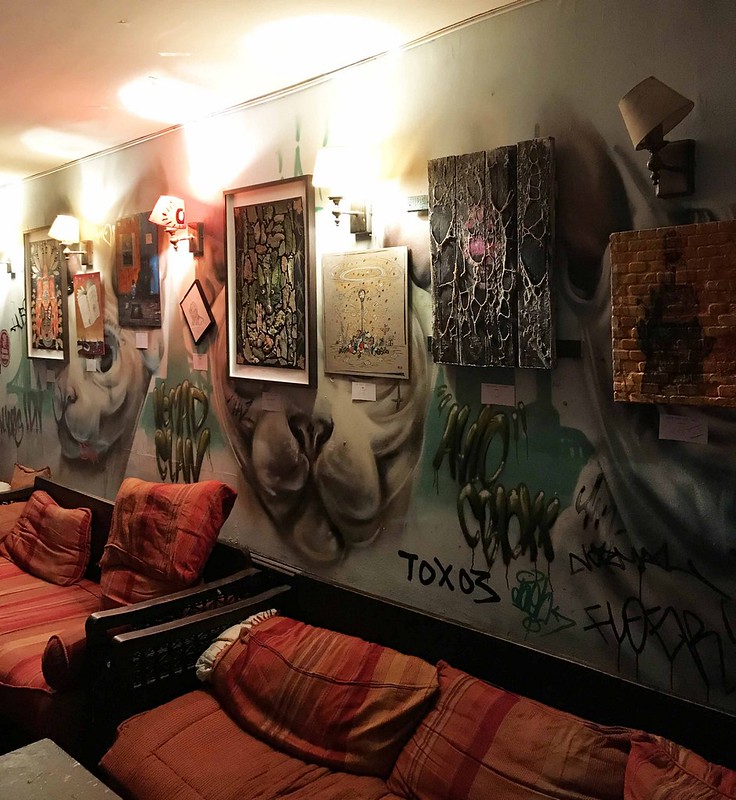 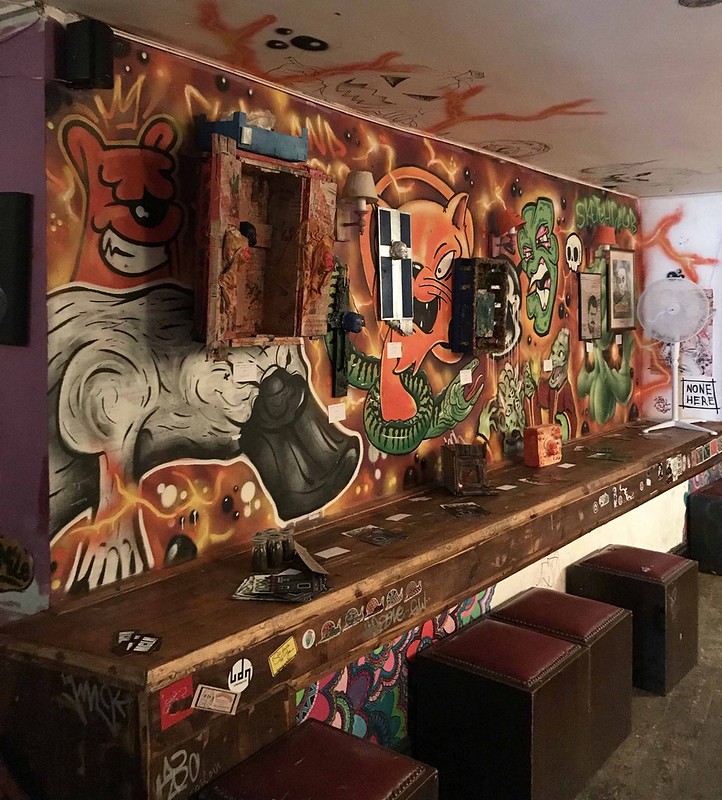