Last summer as I walked into the 2012 BP Portrait Award in the National Portrait Gallery to see Nathan Ford’s entry ‘Joachim’, a tiny 28 x 20 cm canvas, I was immediately struck by its hanging and also by the surrounding competition. It was hung rather apologetically between 2 enormous canvases, and demanded the visitor get up close and personal with it. It also deserved to be given a little time.

In terms of the 54 other competitors, listeners to Mark Kermode’s film reviews will have heard his oft repeat mantra about the ‘death of narrative cinema’. Well, the BP Award seemed to be the insipid death of figurative portraiture as row upon row of large ‘perfect’ portraits gave you everything on a plate; the subject gazing into the artist’s easel, and photorealism becoming an over-used one trick pony. Given that there were 2,187 entries, I wondered if Nathan really was the only painter in the world who saw the possibilities of the portrait format rather than its limitations, or whether it was merely the judges who couldn’t see beyond their paint brushes?

Given this I looked forward to Nathan’s bi-ennial solo exhibition at Beaux Arts in Bath.

Please click on the photos for larger versions. They really do deserve to be seen in the flesh if you can make it.

When I was about 14 my art teacher told me I’d never be much cop at art as it looked like technical drawing (which I was actually good at).  Unfortunately he was right.

Nathan though has a huge amount of talent in both applications, and in his recent paintings he has been leaving in his ‘calculations’ and more of his draftsman’s markings, whilst also demonstrating the painterly ability and free thinking he has in profusion.

As Nathan’s family has enlarged / began to grow up, he seems to feature them more and more. Of the paintings with recognisable people in them only 3 are not of his wife, children or parents.   In addition, several of his cityscapes seem to be inspired by the Norwood / Crystal Palace area of London where he grew up as a child.  To say that Nathan is having a mid-life crisis would certainly be over the top, but he does seem to be ruminating a lot on existence, his childhood haunts, and whether his sons will be able to grow up in this increasingly cruel world. 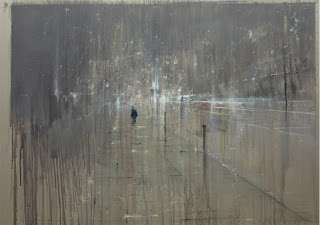 For several years now Nathan‘s urban scapes have often featured his children seemingly lost and vulnerable in busy metropolitan thoroughfares that belittle them, as though their lives are fleeting and disposable.  Of these new paintings ‘Plateau’ is the most clearly ‘perilous’ in its urgency as his young son hovers at the edge of a tube platform.  His other canvases often present a more ‘real’ danger to me though, as there is something unreal about ‘Plateau‘; as though this is only perceived danger.  The platform is empty, which even on Boxing Day is never achieved in London, and on the opposite platform just two solitary men loiter, with seemingly no inquisitiveness in the abandoned tot.  The concourse behind looks empty (and incidentally rather looks like Baker Street or Edgware Rd) and even the advertising boards only have old ripped paper on them.  This therefore has the feel of one of those abandoned tube stations, like Aldwych, and is surely more of a dream or an apocalyptic vision than a reality?  A ‘monster’ is ready to devour the iconic ‘Underground’ sign on the wall, and the peeling hoardings have innocent drawings on them; a sign that Nathan’s children are certainly well and truly safe, and have been  drawing on his paintings again! 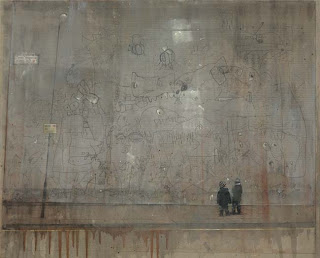 If you ever wondered what goes on in the minds of young boys then Nathan’s new proclivity for letting his two boys doodle on his paintings seems to suggest that if you are ever on Family Fortunes your top 4 answers should be that young boys mostly think about  deep sea troglodyte fish, monsters, big teeth, and stickmen who look a little like the spaced out children’s TV character ‘Bod’. And before anyone says ‘Dran’, Nathan had never seen his work before letting his kids loose on his own meticulous work. 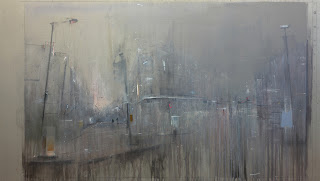 'The Triangle' by Nathan Ford

The danger works best in ‘The Triangle’ as additional inferences bestow a sense of foreboding.  His boys, as usual, are walking away from the viewer (or the painter...), and there is no hint of a good Samaritan who might stop to enquire about the welfare of these two little poppets walking in the middle of a road.   The ’one way street’ signs light up to suggest they are walking into a void, and the CCTV camera is pointing the wrong way; doing nothing to put the viewers mind at rest. 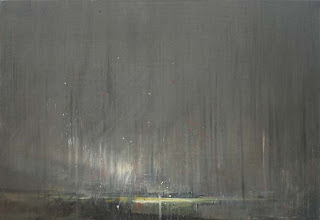 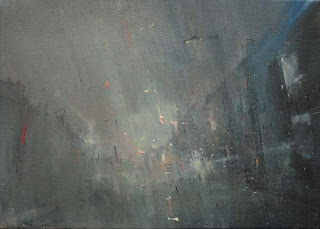 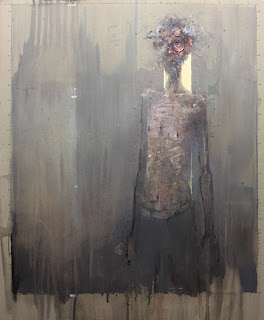 Although the sparkling, exploding paintings like ‘Butterfly Affectation’ and ‘South Circular’ may (rightly) grab the attention, there is no amount of subtlety in the small, dim landscapes such as ‘Incoming’ and ‘Pricetown’, and there are also withering, bursting caricatures in ’Samuel’ and ’Hurricane Terrence’, all 4 of which strangely remain in the very exclusive club of ‘unsold paintings‘.   It sadly seems as though buyers don’t want the murky and secretive landscapes, or the ’wild’ looking portraits, even though I would humbly suggest the later in particular show Nathan’s inner angst and technical fluency the most lucidly. 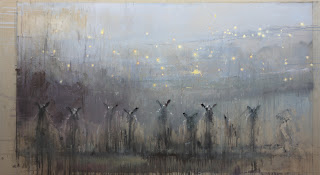 ‘Flock’ is a rare pastoral painting, but is also technically a portrait, as curious sheep try to gang up on the painter, their faces emerging out of the flickering twilight in various forms of readiness, as if they are made of wax melting on the austere hillside. 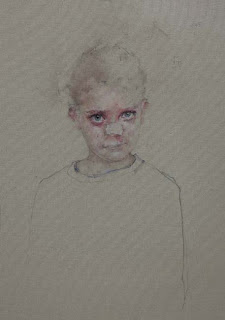 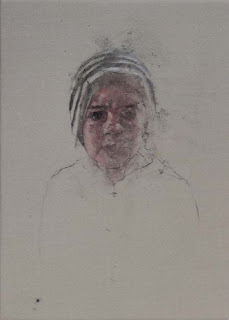 They say that ‘the eyes are the window of the soul’. If that is true then Nathan’s numerous small portraits force you to gaze straight into the inner sanctum of a person’s psyche, as often only an eye is ‘finished’ and the rest is inferred, sketched or incomplete, rather like how you think you know someone but really they don’t even totally know themselves and are still incomplete and deficient.   ‘Flies’ buzz around the sitter’s heads. Rage and anger explodes in a few of them.   Quiet melancholy abounds in others, and Nathan’s sketch marks sometimes make it feel like you can see the plates that make up the crazy paving of a broken skull.

There is one double page spread in the catalogue where the paintings of Nathan’s children make you feel like you are looking in to the eyes of Anna and Nathan themselves.   ‘Reuben 1.13’ has the doe eyed gaze of his mother, and ‘Joachim 8.12’ has the slightly melancholic face of his father, plus the family penchant for males attired in a hat. It is a shame that they are not also hung together, but that is a minuscule bleat amongst this exceptional exhibition.

Nathan Ford's exhibition is on at Beaux Arts in Bath, until 6th April 2013. Entry is free. http://www.beauxartsbath.co.uk
Posted by martin bull at Tuesday, March 26, 2013 No comments: