August, a hot oppresive city, empty workspaces, charged tense atmosphere and tourists.  Yup, on the whole that pretty much sums up this month's Shoredtich Street Art scene except that wall space was actually pretty very full and in one controversial case, pretty badly buffed!

Above did a cool Pole Dancer which in daytime baffles but at night amazes.  Someone - presumably the building owner immediately took steps to "conserve" the work by covering it in pespex but....hang on mate.... you can't sell it, it requires the shadow of the lamp to make sense so it can't be moved, duh: 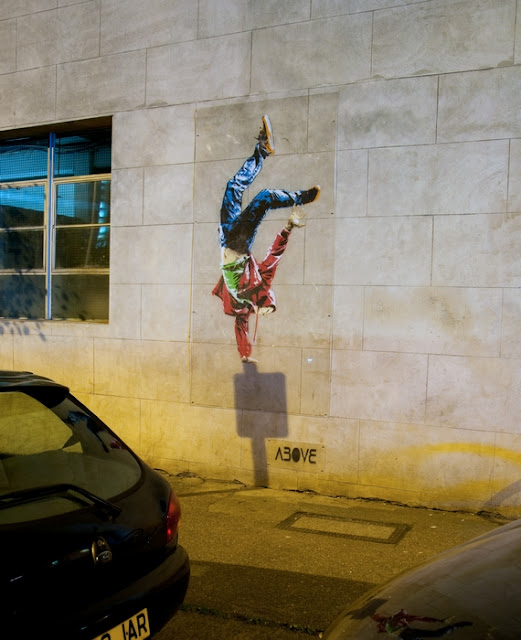 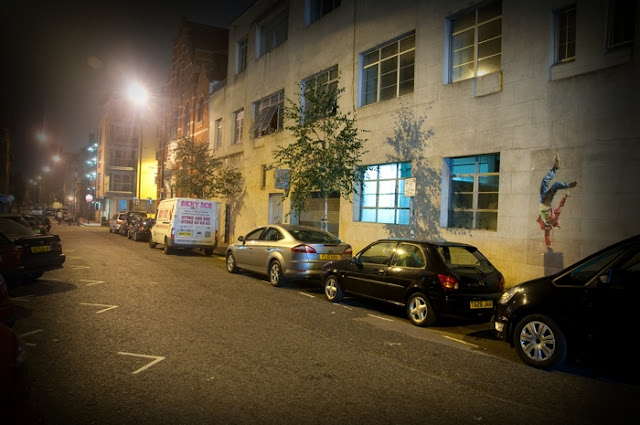 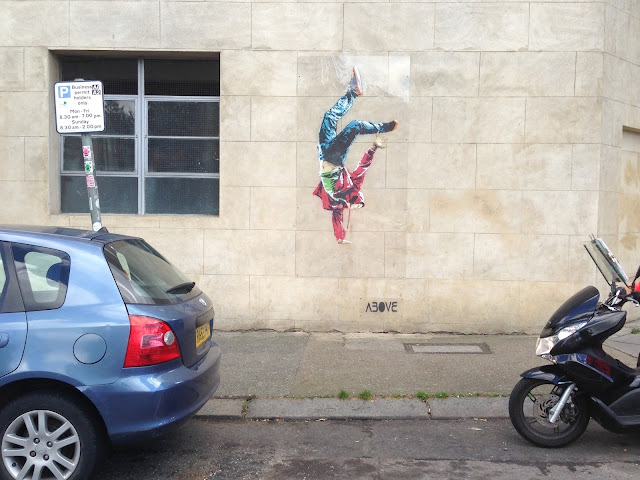 Otto Schade did his thing with the nuclear sun background again, lushly blended paint work looks beautiful.  Nice to see how self effacing this one is compared to the Hanbury St one which has a tag and TWO osch weblinks: 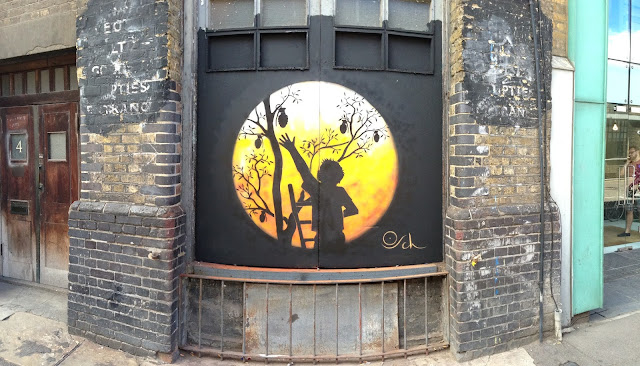 Small pieces by Fred le Chevalier were in great abundance this month and looking very sweet too, such as this sprinting bearded lover: 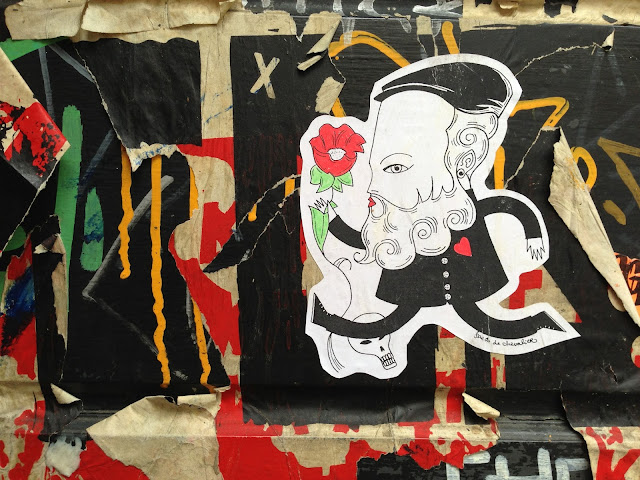 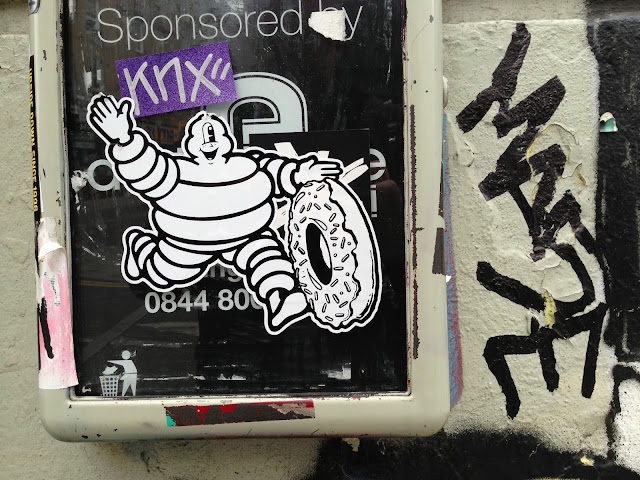 The "hate Eine" still raises eyebrows - it's by Eine himself. 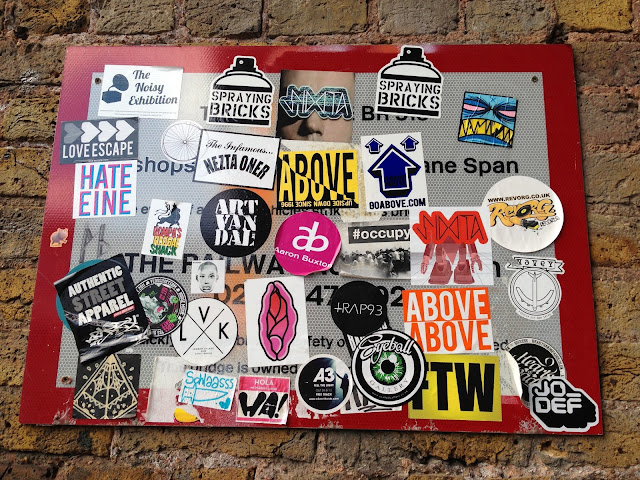 Not painted in August, just the first time this photographer found the doors shut! 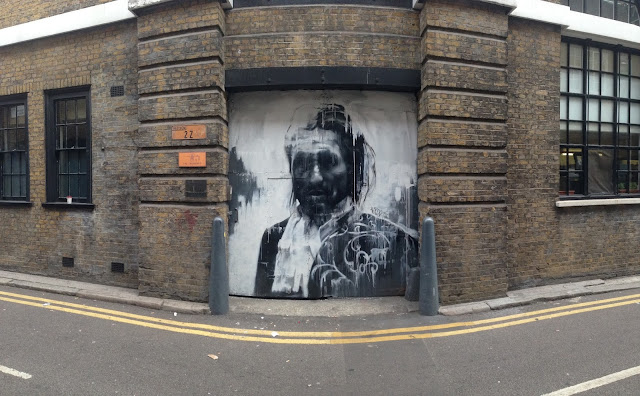 Saki executed a trio of nicely sized Geishas on plywood, the first time we have seen action from her on the streets in quite a while, I wonder why that would be?....what?....you think there might be a show coming? 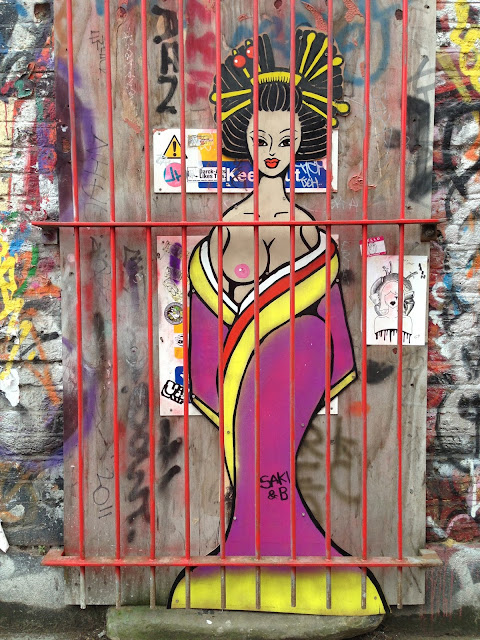 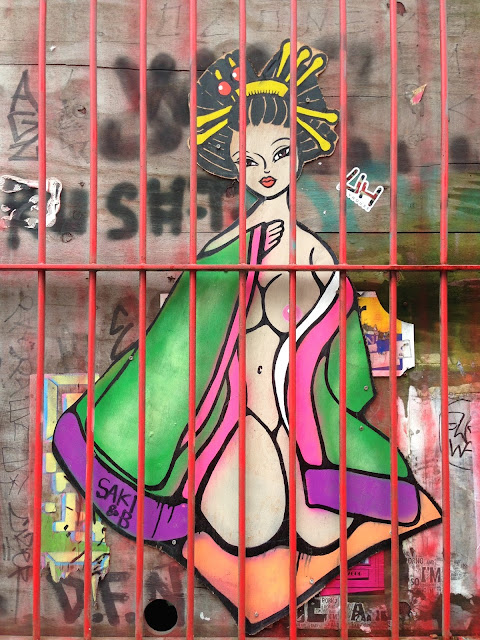 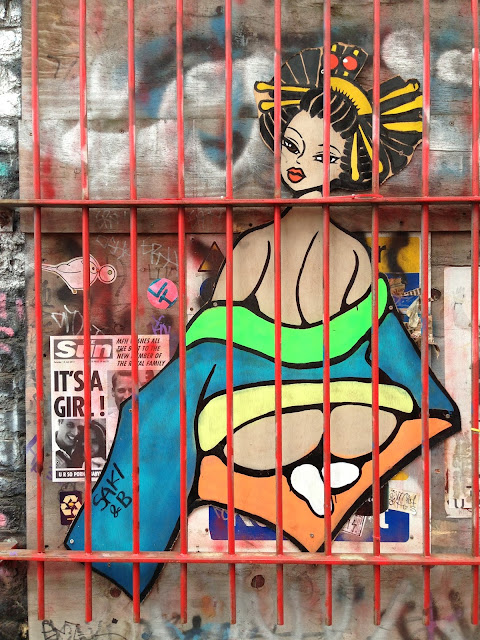 French Artist Tian came through and dropped almost 30 pieces on Shoreditch walls.  He loves his Japanese Shunga style, but they are a bit beyond risque so here are three carefully selected images that ARE fit for showing on a family rated blog! 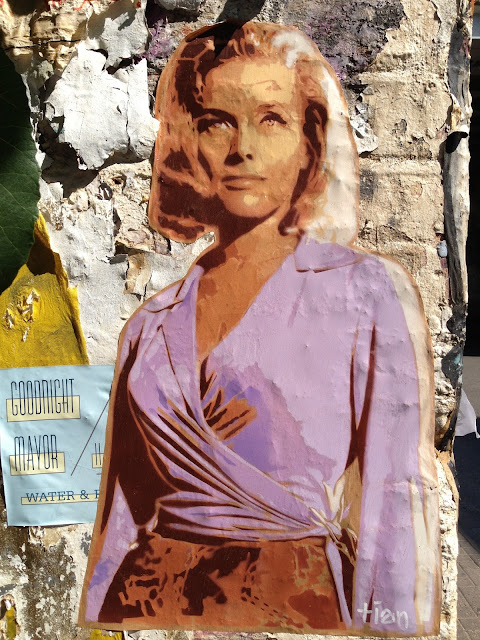 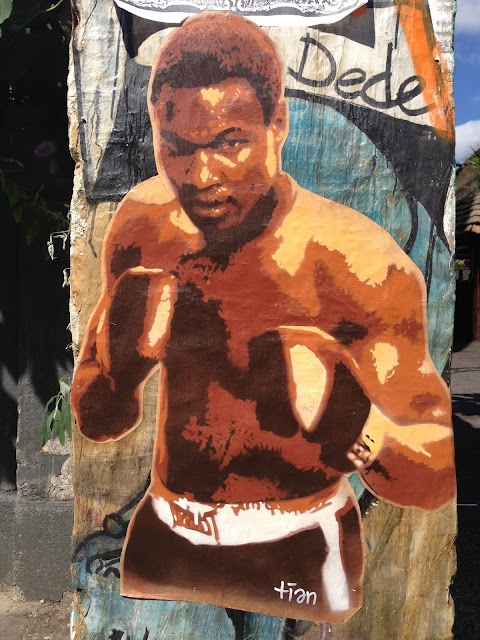 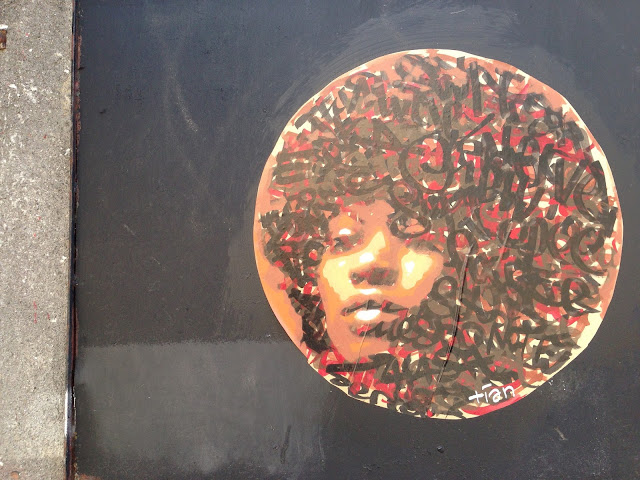 MadC really laid down a maker in the largest Commissioned mural category, dwarfing the adjacent Reka and blinding many an un-prepared tourist not wearing sunglasses.  Not a single Shoreditch hipster was affected. 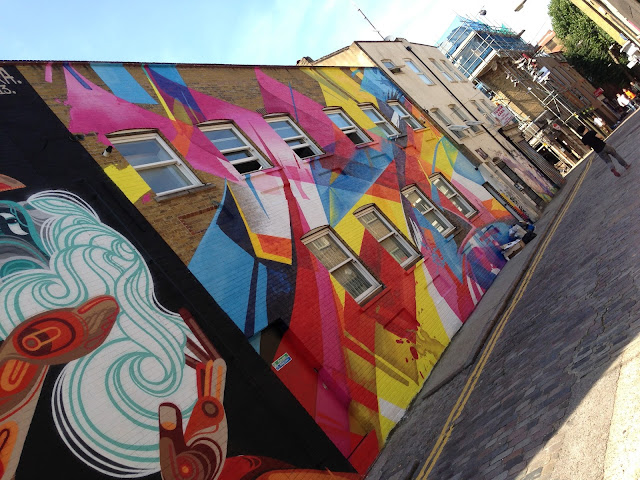 Alex Senna passed through on a Brazilian art trade mission of some sort painting many fey little murals in black and white. 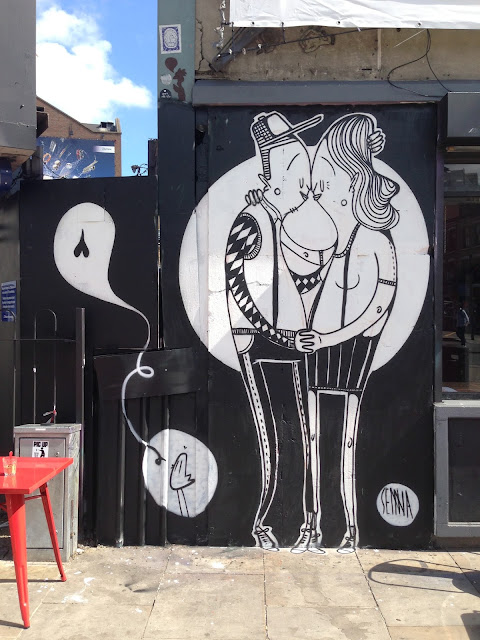 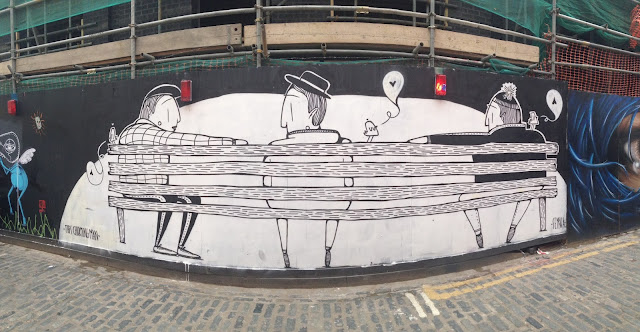 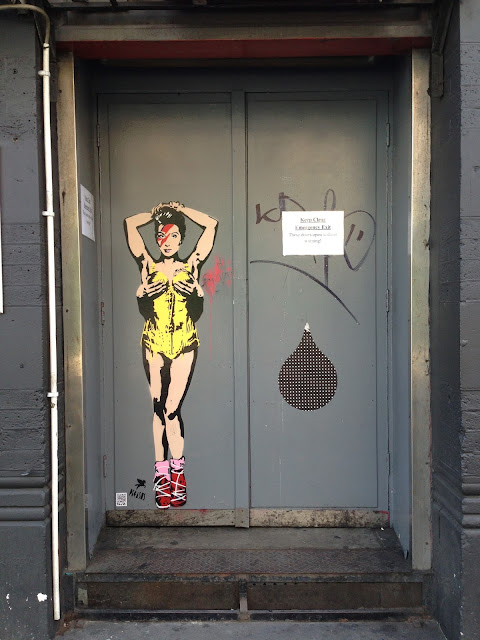 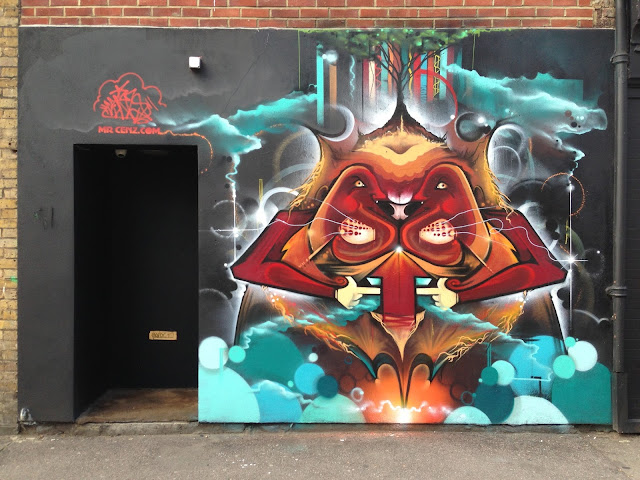 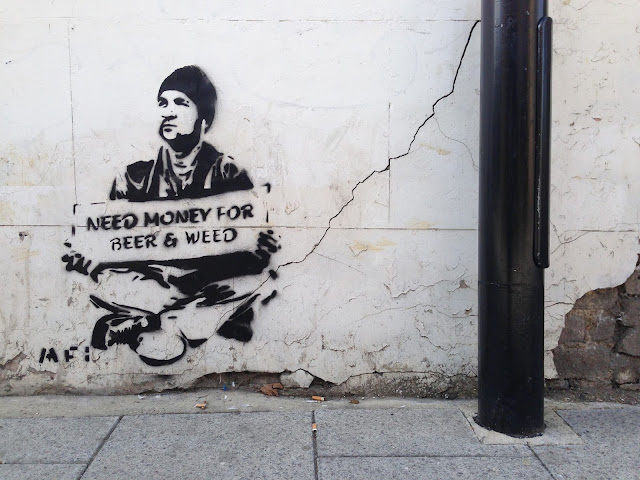 Two long standing murals got taken out too this month along the stretch on Redchurch street, probably only a matter of time before this wall is made pretty once more by the hottest new artist wanting a legal wall sooner or later....until then a nice bit of Chrome will do. 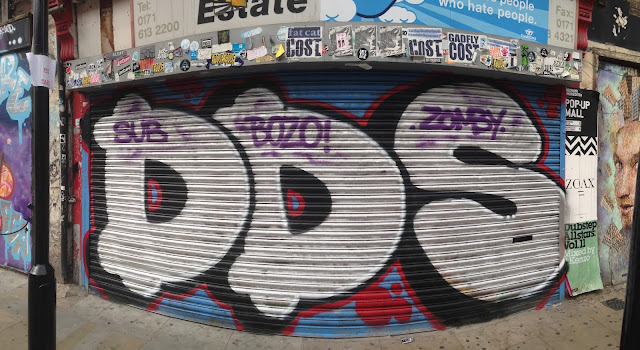 So, the end of summer is upon us, traditionally we expect less activity as the weather cools down....but seasonally adjusted longer hours of darkness can lead to more opportunity for illicit decorative activities. Lets see what September has to offer!