I have always been repelled by Ron English’s udder-rich pop coloured studio work, few exceptions barely worth mentioning. Moving that studio art out onto the streets doesn’t change my mind – see Camo boy from 2008. Even his inclusion in CANS with what looked like paste ups seemed a bit odd. 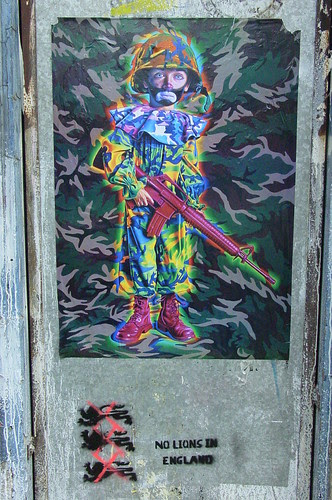 Ron English Camo Boy, London, (this was spot jockeying, not a collab!)


The billboard campaign stabs corporate and western imperialism nicely where it hurts, in the blind eye it turns on its own hypocrisy 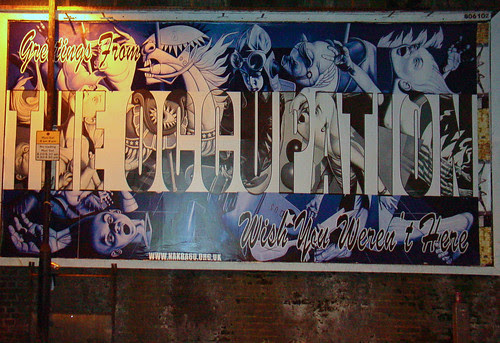 
This week I have collected a large series of sightings of speech bubbles and thought bubbles containing wistful bon mots, semi lucid sound bites and snippits of a private inner monologue best not brought out into the open. A bit of flickr research confirms Vandalog to be the first to attribute these to Ron English and for artists of such stature, RJ’s attribution is a good as law, in fact if it wasn’t Ron English I suggest he knock a few of these out sharpish. 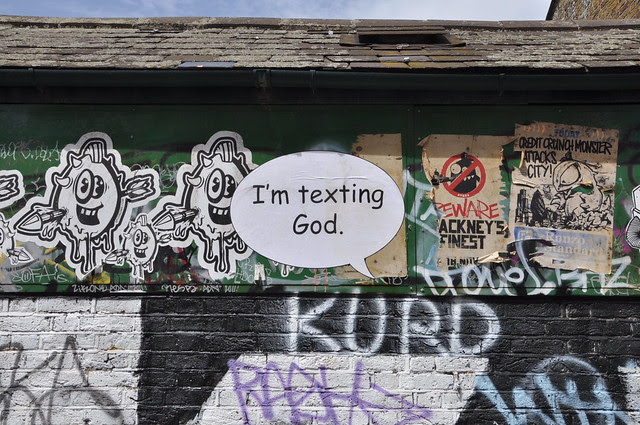 At first glance these captions were puzzling and seemingly un-satisfying. What was their point, and why was their placement so damn careless. Not one of them seemed to relate in any meaningful way to its environment. London’s walls are heaving with graffiti characters, rich singers masquerading as teen sluts on illegal flyers or marketer’s perfect families on advertising hoardings, these captions could surely have been better placed so that they looked like they were coming from those flat characters? 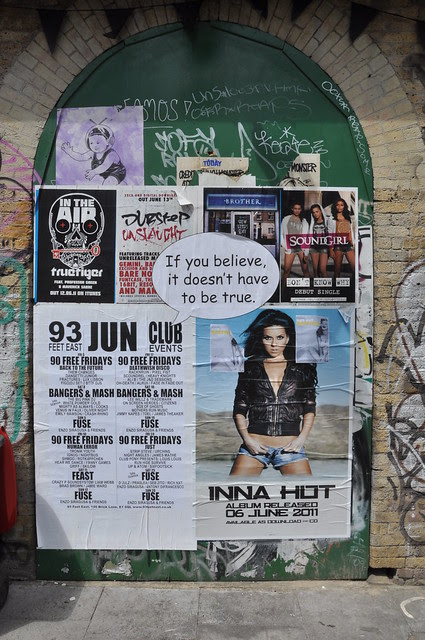 Perhaps you might think the walls as well as having ears also have thoughts, complexes and wise words to share. 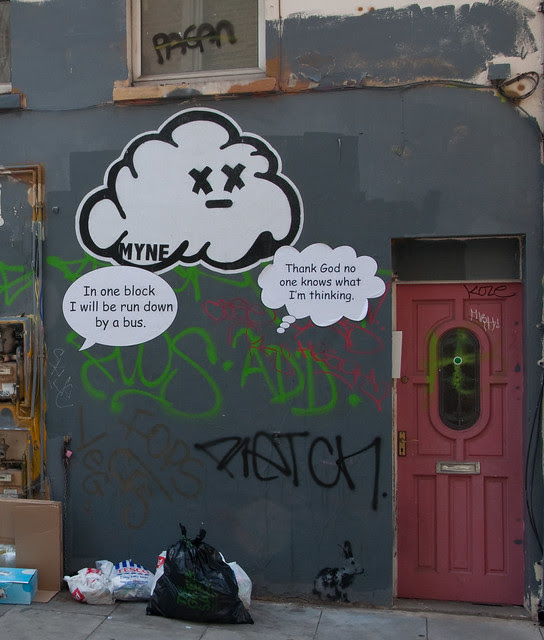 We know this artist grafts ruminants' udders onto Disney characters but what are these ruminations about? Then the penny drops. What English has put up is a series of incomplete installations, the pieces only make sense when YOU come along to actually say or think them. That placement - he was wilfully avoiding those characters on the wall. Every single one of these pieces works brilliantly when a member of the public passes by and momentarily the captions belong to them. 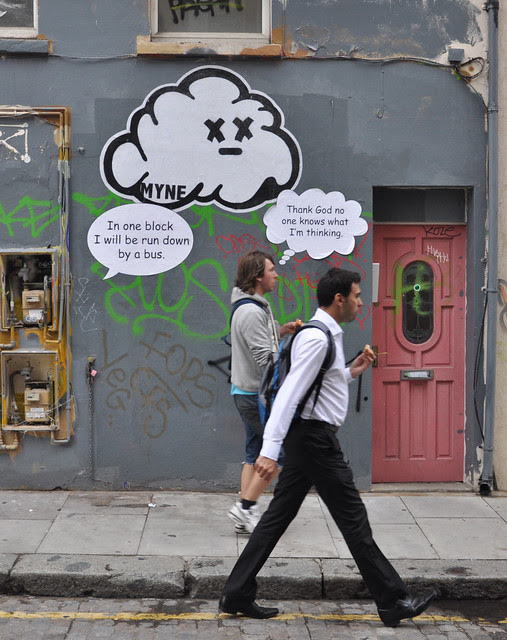 Even more intriguingly, the person who fleetingly becomes part of the installation is probably not aware of the significance of his role. The art exists only for a tantalising moment and really is best appreciated from the third party perspective. 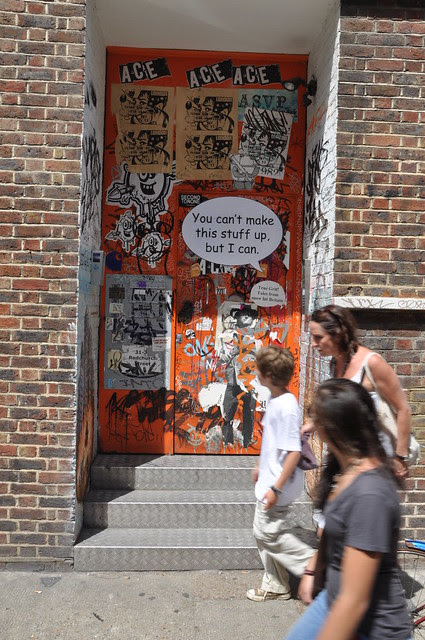 You can only conclude that this art needs you there to complete it and in the case of the various art pieces illustrating this web page, the art existed only when I the photographer was present to observe and record its transient existence. I am honoured to be able to share with you this street work that Ron and I put together. 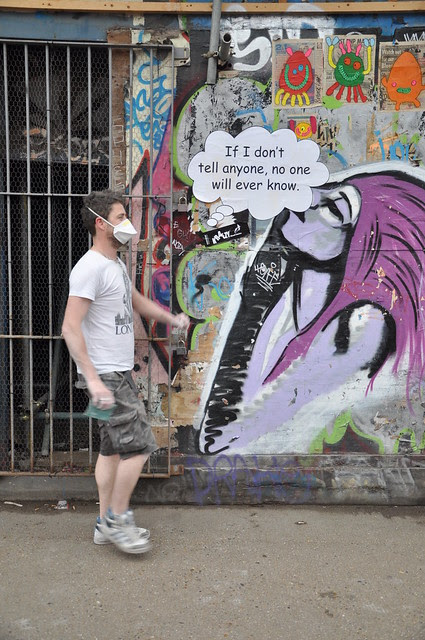 (clothes and gait - model's own)


I would like to thank Ron English for his vital contribution to our collaboration, I really couldn’t have done it without him. Thank you also to his assistants, drivers, ladder bearers, make-up artists and anyone else who knows him. 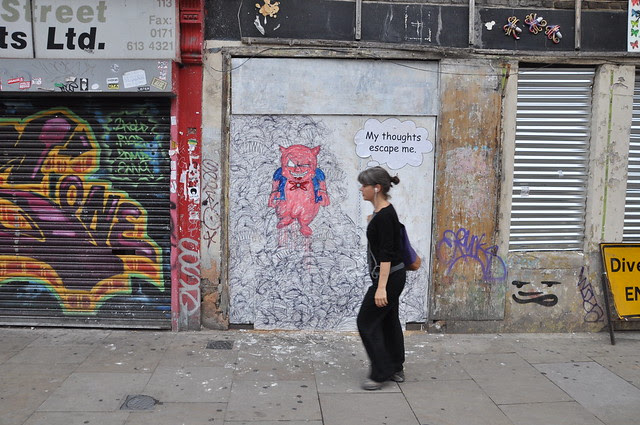 If you think this insight is rubbish (congratulations) I believe Ron English makes his intention quite clear with this particular caption for those of a more Liliputian stature. 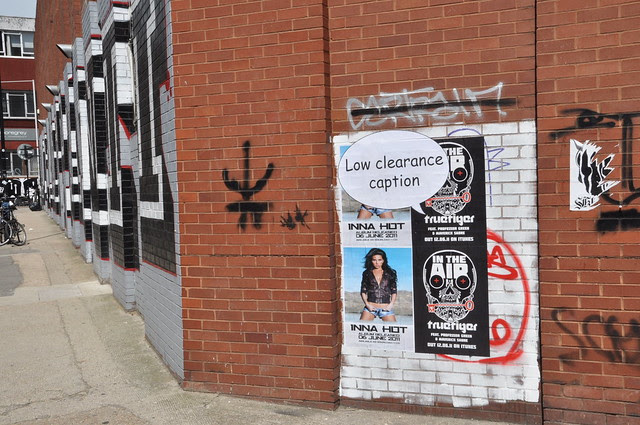 This Ron English campaign is the conceptual opposite of my single all time favourite street art installation – Jimmy Cauty’s street mirror under Old Street Bridge which makes the observer disappear. Here English requires you to appear. You can’t knock the genius of a guy who can come up level but opposed to Cauty’s finest (street) hour, this is why Ron English actually is deservedly the legend he is. 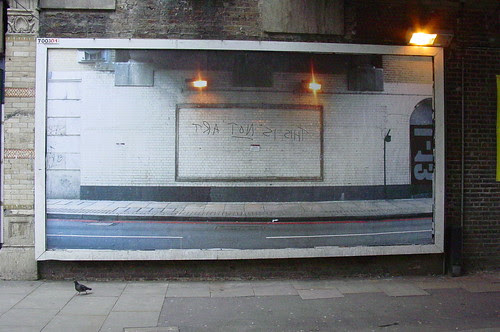 That said, in a period where an artist is taking art placed in the bottom 5 inches of London walls to new heights (no – really, boom boom), Ron manages to sully that hem of public space with a small paste up of an excessively pneumatic Mini Mouse. Oh dear. 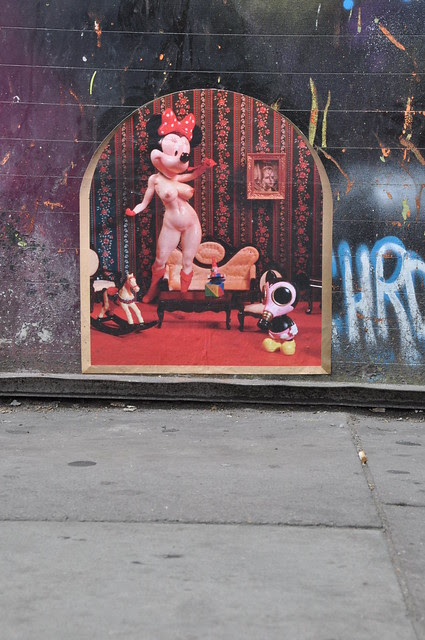 So, I had a rare free day planned a week in advance to go to a few abandoned sites around East Sussex - namely a closed technical college on the sea front. . . 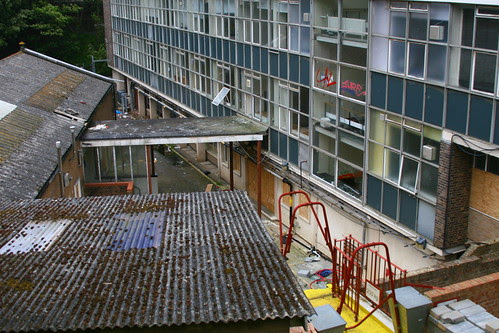 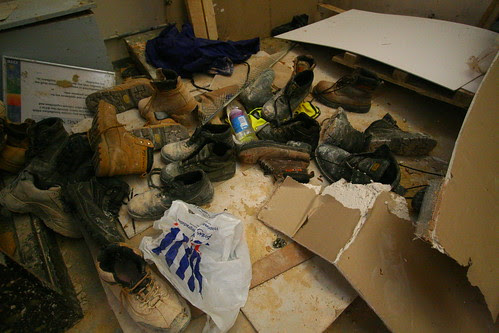 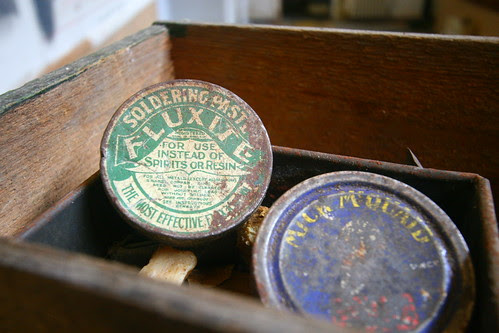 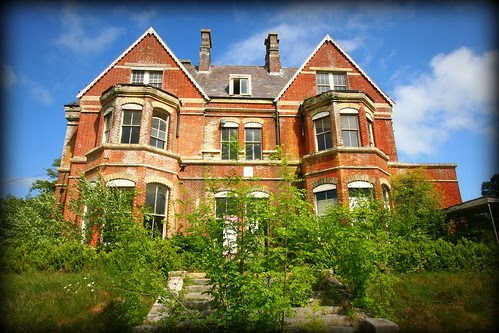 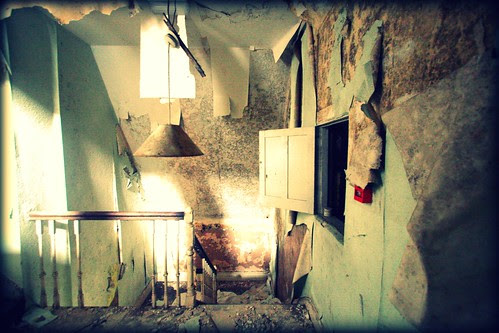 Now whilst on these trips I do expect to see the odd bit of graffiti, I certainly wasn't expecting to find my first two full on Paul Insect pieces!

And then this "life sized" Mickey Mouse: 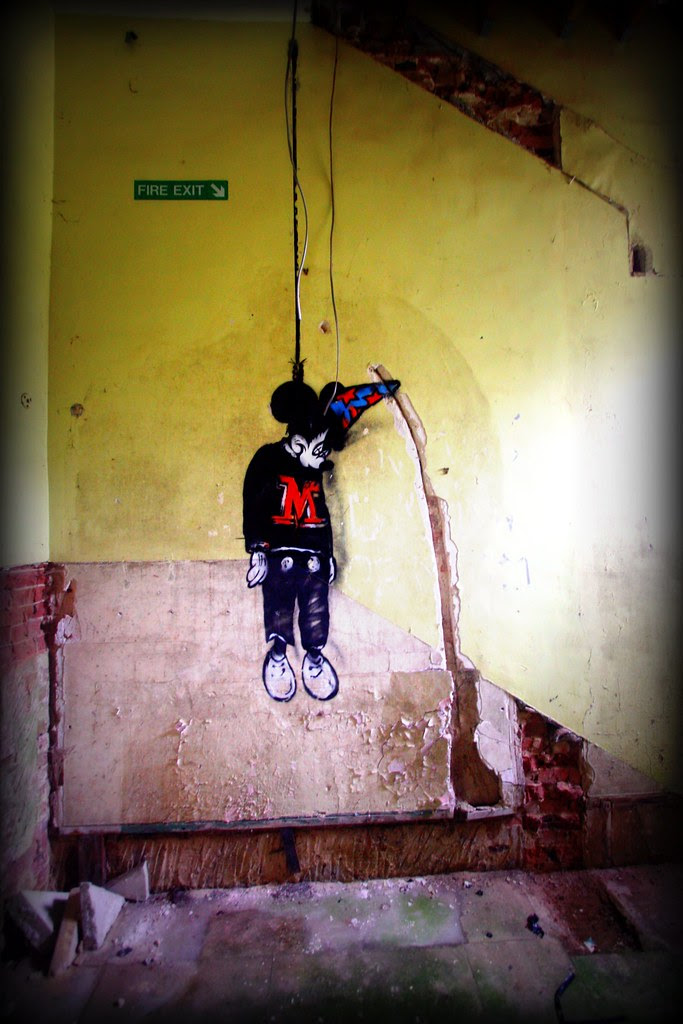 Originally questioned by a few Flickr contacts, to which I said "nah he wouldn't come out here to paint that surely"? Then contacted and had it confirmed by the gallery.

So much for a day off. But I really wasn't complaining!
Posted by HowAboutNo at Wednesday, June 01, 2011 No comments: