Eagle eyed residents of Hastings and St Leonards may have noticed the sudden crop of giant geometrically patterned moths appearing on walls around parts of both town centres recently. The reverse graffiti being the work of a UK artist called Moose, one of the people to have pioneered the movement of "Clean Art" where stencils are placed and then a cleaning solution is applied to leave the fairly permanent, but still temporary form of art. Moose a.k.a Paul Curtis, was one of the team of people behind the Leeds based Soundclash and he also promoted the Soundclash club nights at which Andy Weatherall was an early fixture and Tricky made a rare and reputedly dreadful early DJ appearance.
Moose says of his vision and how he began making clean art of his own "I just saw marks on the wall where the shoulders of unsteady drunks and the fingertips of curious children had exposed the shiny White tile" And with only a pair of socks as his tool, reverse graffiti was born. Moose has been doing this for over ten years now and has worked on many commissions often highlighting various health and awareness campaigns and St Leonards certainly needs some help there! It's high quantity of dirty walls means it has the higher proportion of Moths over it's Hastings neighbour. There are currently 7 locations where the moths are living, hopefully those numbers will increase over time and maybe even encourage more forms of art in unloved places. Each site has a different moth design unique in its complexity, all of the designs are also based on moths native specifically to the area. The project has 100% backing from the council and more specifically councillor Peter Chowney (In charge of regeneration in the area) who has said "It's an exciting installation which has enhanced the Hastings landscape, it's also great fun to suddenly come upon one of these images walking around town"
More details about Moose can be found at http://www.symbollix.com/
Posted by HowAboutNo at Sunday, December 12, 2010 No comments:


Remember Banksy Locations and Tours, a pocket size book produced in 2006 which detailed locations of Banksy street artwork? That was structured around around 3 tour routes of Banksy’s wall art in London that a lucky few experienced free of charge at the time, though a bit like the Sex Pistols at Manchester Free Trade the number that claim to have been on those tours now exceeds the population of the UK.

That was the work of Graffoto contributer Shellshock and we are pleased to announce he has done it again with the release this week of Banksy Locations (and a Tour) Vol II. The significant difference between Vol I and Vol II is that Vol II addresses all the other areas in the UK where Banksy has been active EXCEPT the locations covered by Vol I. So that’s all “new” stuff then. 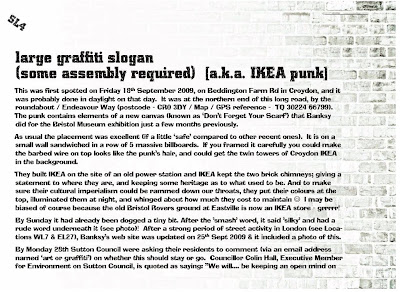 Vol II is a fascinating insight into some of the older and more provincial Banksy street art which London-locked folk like the rest of Graffoto don’t get to see. Though one or two of the London Banksys included in Vol II were only a couple of hundred yards off the routes of the original tours, they didn’t make Vol I simply because they involved too much of a route deviation to actually be included in Shellshock’s tours.

Stylistically it sticks faithfully to the blueprint established by Vol I, which is to say there are photographs, with locations, notes on relevant history and an update on condition – if it has any! Regard it as a kind of I-Spy guide to Banksy’s public works and the ideal sister publication to Vol I.

Vol II is published in hardback, making it harder wearing for those walking/cycling/charabanc tours.

This looks like a nice little stocking filler for any enthusiast of Banksy and street art in general.

Quoting from Shellshock’s own writing to add further colour and details on how to obtain a copy:

“It’s a whopping 380 pages of hardback book and includes his street work all the way up to this October. There was just so much more to write than Vol.1; there are more locations (over 135, of which almost half are still worth visiting), more news (especially on the more recent pieces), better photo ops, and a few flounces of creativity. There is obviously no hiding that it is very similar format to Vol.1, in that it is based on locations, my photos and info/history about the piece. BUT there is a little more leeway in Vol 2 because it is less tour based (the only tour is in Bristol, which is pretty good actually; a lot survives, including some very hidden gems), and although it rounds up a lot of locations in London that couldn’t be covered by Vol.1, a third of the locations actually come from Bristol, Brighton & the South Coast, Manchester, Liverpool, Birmingham, Glasgow, and the rural West Country. If everything goes ok and this winter weather doesn’t wreck it, I should get it on 7th December. It will obviously take a short while to get into all the shops, so if you fancy it soon it might be best to get it via the ‘net.

It’s on Amazon here (where sample pages are also viewable for free).

If you prefer to buy direct, then I’ll be selling it through my eBay account once they arrive. I've been on eBay for over 7 years now and still have 100% positive feedback.

Any sales via myself will get a couple of postcard flyers thrown in for free."


Shellshock is usually very approachable, so as a very nice inexpensive gift you could visit his eBay listing and ask him for a signed copy of Vol 2 with a dedication, all dispatched in time for Christmas [insert your religion/non religion's alternative day here] if you order quickly enough.

Putting the erm… into Vermin


All photos by shellshock


“Given the state of the planet, humans, or some humans, must now be categorized as vermin” (John Carey in ‘The Intellectuals and the Masses -Pride and Prejudice Among the Literary Intelligentsia 1880-1939‘)


I’ll spare you the weak reasons for the complete tardiness of this ‘review’ of Dale's show this October in Bristol. Soz, but I’m here now, so let’s just get on with it ‘eh? And finally I get to use the word ‘tardy’ in a blog :-)

Vermin (aka Dale ‘vn’ Marshall) has long been one of my favourite writers/artists, primarily as one of the Souls On Fire (SOF) crew throughout the late 90's and most of the 2000's, so I was especially excited when I heard earlier this year that he was doing canvases of his own work, and was then preparing for what seemed to be a very tardy [got it in again :-)] first exhibition for someone in his late 30’s.

The reason for this late blooming was presumably, at least partly, because Dale has led a life and a half so far, and by his own admission not necessarily a life you’d wish for when a kid. Dale’s personal experiences and ongoing battle with his own mental health, including stays in a secure unit, is in equal parts amazing, shocking and totally understandable when you see his art (visit here for more info). I don’t know Dale but I feel some connection through his art, maybe aided by us being from the same city. My own minor battles cannot be compared to his, but I do get a strong personal feeling from all of this, and my heart skips a beat when I dip into his soul.

I get the impression that during these dark days and nights Dale probably forgot that he was an artist. He also probably forgot he was a writer. And whatever inane discussions exist in the world about what a ‘writer’ really is and who is and isn’t a ‘writer’, I’d merely suggest that Vermin was and has always been a writer, even if it might not be as obvious as when a young lad does ‘Trax’ (or whatever) in large, basic letters on a scabby wall. Dale has a totally different style to that, but his work still (quite literally) oozes his name.

So ‘Room 101, The Fine Art of Graffiti‘ showcased 101 oil paintings completed in 101 days this summer, as well as five additional show paintings and site-specific installations and wall daubings. However faint it may have seemed to the casual eye, I'd say that all 101 canvases had ‘vermin’ carved into them, like ‘Blackpool’ in a stick of rock, or to use a far darker analogy, like a self-harming teenager with a sharp knife and a bloodied and scared forearm. 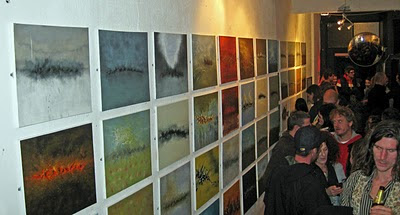 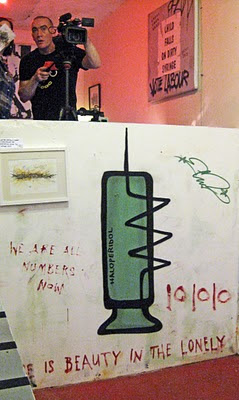 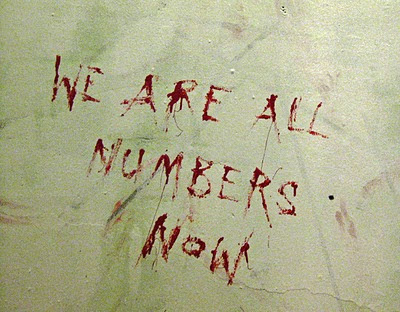 Although Dale is now happily studying at the historic School of Art at Coventry University, and has a great support network around him, he‘s obviously not going to forget his past quite so fast. The Room 101 theme obviously drew parallels from George Orwell’s novel, 1984, and was most evident in the institutional paraphernalia that was scattered around the venue. ‘Dentist’ chair and prescription drug cocktails with flashing light, a recreation of his hospital bed, a freaky video, maggots in a bowl, etc. When some people walked into the venue they must have thought… erm… what the hell is this! 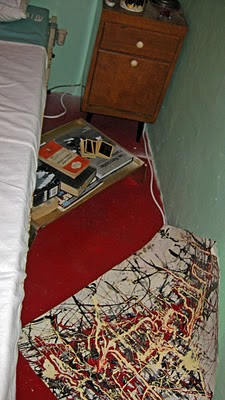 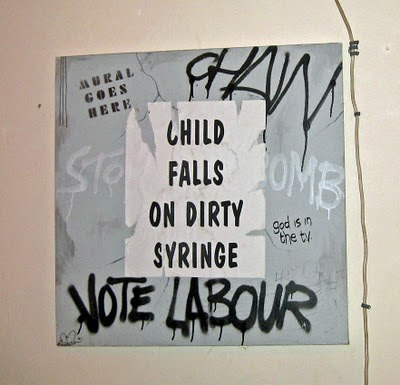 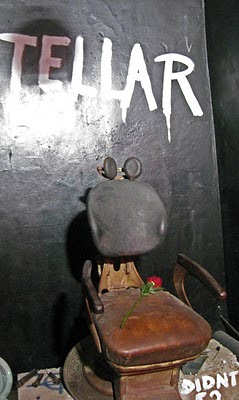 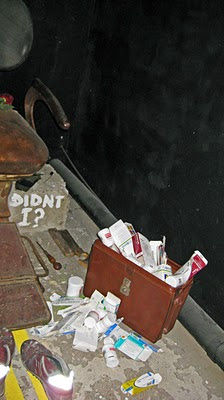 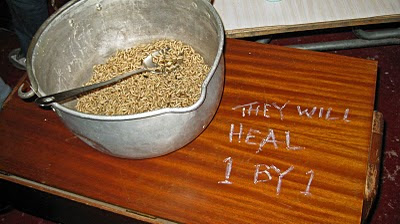 The canvases were amazing, and although there are tinges of melancholy, brooding and inactivity, they actually mainly radiate hope, colour, passion, energy and thoughtfulness. Just like Don McCullin hates being refered to solely as a 'war' photographer, I imagine Dale doesn't want to be just seen as doing those pretty dark abstract murals. It was a really strong body of work. I know a few professional artists and to do 101 canvases in 101 days (um... that's one a day I reckon..?) is quite a stretch, especially with a rigorous quality control as well (I think Dale had about 30 odd others that didn't make the cut).

So now I can come on to the two canvases I managed to buy amidst the slightly undignified bun fight that occurred on the opening night. A lot of people had obviously heard about the show and some even travelled some distance and waited for quite some time (and/or pushed into the queues) in order to be there first to get what they wanted. Call it madness, peer pressure or dedication, or a bit of all three. I was amazed that I still managed to get my first choice of the 90-odd canvases that hadn’t been pre-reserved or were not for sale. I really wanted at least one that had ‘writing’ in it; a sort of hybrid of ‘pure’ art and a tag. That for me was something to straddle the two worlds they represented. 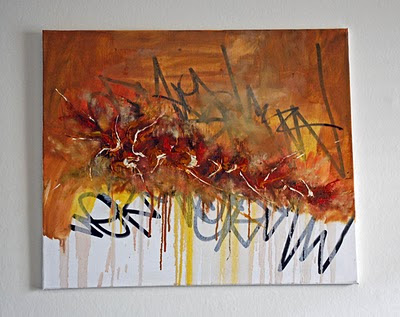 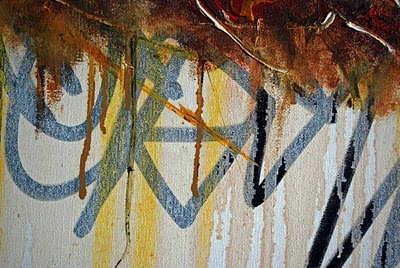 My second canvas was from the more meditative pieces on the opposite wall. Yet it still has that slight tinge of violence in it. 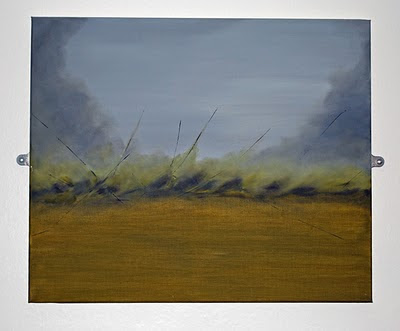 More power to your elbow Dale. Hope to see more from you soon. And if you do fancy a ‘time share’ visit to your canvases, pop round next time you’re visiting the Royal Arthur [this will be explained in a forthcoming blog…]
Posted by martin bull at Monday, December 06, 2010 1 comment: