A decent target and a good idea is all the motivation K-Guy requires for another politicised barb delivered through the medium of stencilled street art. Bankers and politicians are frequently a target for K-Guy and as usual, he delivers a simple message with exquisite timing and placement. 
K-Guy is coming from the same ideological origin as the protesters. They see a need, they seek a voice, they cut out the official channels of protest by putting direction action into effect. K-Guy rolls out the carpet. Throughout banking's casino years the watchdogs failed to bark, the cracks appeared with the run on Northern Rock in 2007 and shortly after the collapse of Lehman Brothers in Sep 08 K-Guy nailed the genesis of the ongoing crisis in capitalism with his October 2008 Memorial To The Boom Economy alongside the Bank Of England. Occupy has generated a substantial body of protest art around the camp and it was curious to feel a resonance with K-Guy’s earlier Memorial. The pot pourri of organisations, faiths, individuals and objectives that make up Occupy pride themselves on being a true democracy. They aren’t too shabby at media management either. There is a packed itinerary of events taking place today (sat 22 Oct), check out the details on the website OccupyLSX. (www.occupylsx.org) (got to be handy having the country's largest camping gear retail onsite!)


Having accompanied K-Guy to take some photographs of what he expected to be a very short-lived installation, I asked him if he was going to hang around to see what became of his carpet art, he shrugged and replied “my work here is done, I‘ve delivered my idea and now it has too look after itself". Some 30 minutes later the carpet was still there. It's well worth checking out K-Guy's track record with the political street art here, particularly relevant in the context of OccupyLSX is his exhortation that you might as well hoard your cash under the mattress, and photos of his Memorial To The Boom Economy can be found here. The protest remains in place. The news is entirely about the right to protest and the friction within the church over its response to the prescence of the camp, which has caused one canon to resign. Virtually nothing is said about the aims of the protest. K-Guy's rug remains in place, nopw the attractive unique foyer carpet to a small tent. The limelight has definitely been stolen by a monopoly based piece of work which arrived on site over the weekend. Some claim it is the work of Banksy, if it is Banksy then it’s a huge disappointment. It has none of his usual colour palette, none of his "style" and it just isn't that funny. With political jibes Banksy always hits the target with an anarchist's guided precision, this is just lame. Occupy is about democratic change, wealth re-distribution, smash capitalism etc, this monopoly piece is, at best, about greedy bankers with their hands out (as if to some kind of..ooooo....Stability Fund...). Why does it look so much like a straight theft from Zeus with an Alec monopoly character slapped on it? 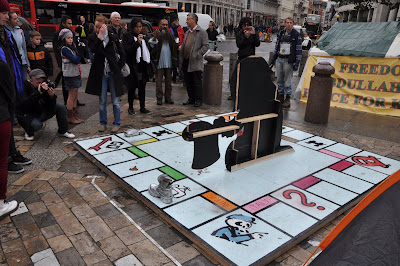 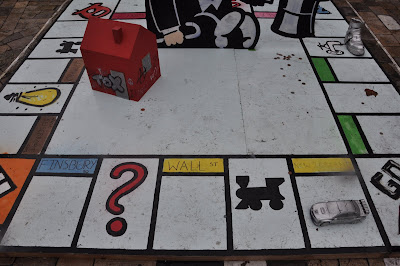