Banksy - Monkeys In The House Of Commons

Banksy's most spectacular painting to date is on display at Sotheby's Bond St, London HQ and beautifully staged it is too. 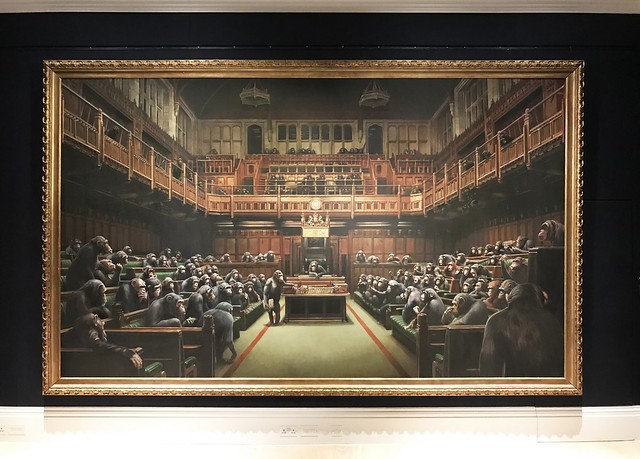 
Devolved Parliament is being auctioned this week when London opens its galleries, museums and park tents to its annual international art week. This painting first appeared in public in 2009 when with staggering panache and secrecy, traditionally two mutually exclusive traits, Banksy took over the Bristol Museum and Art Gallery for his largest show. The show was brilliant, a fanboy tribute/review appeared on the Graffoto blog here. 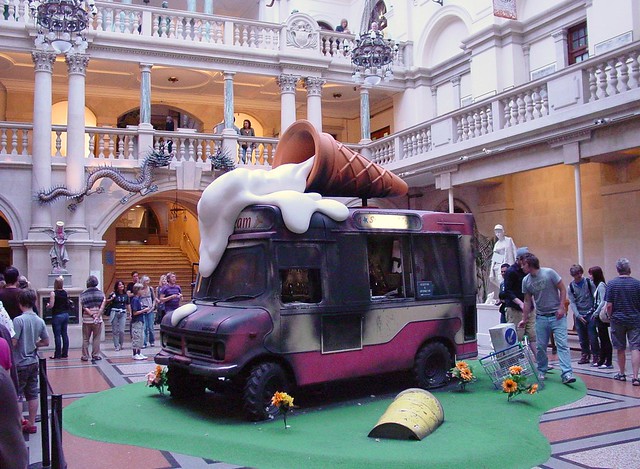 
This painting was at that time called “Question Time” thought it is possible that we only know that now!  It was a nightmare to view and photograph with the horrible lighting and the crowds. Here is a really shit photo. 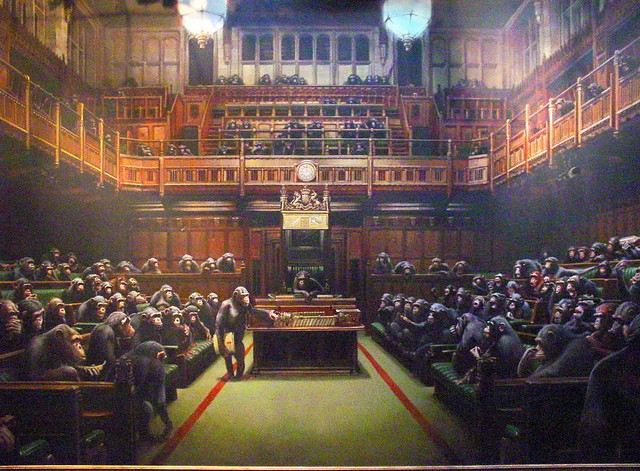 
This time the lighting is awesome and the staging is superb with it set up to look like the House of Commons benches extend into the room, I am sure there will be lots of selfies coming out of that space this weekend. 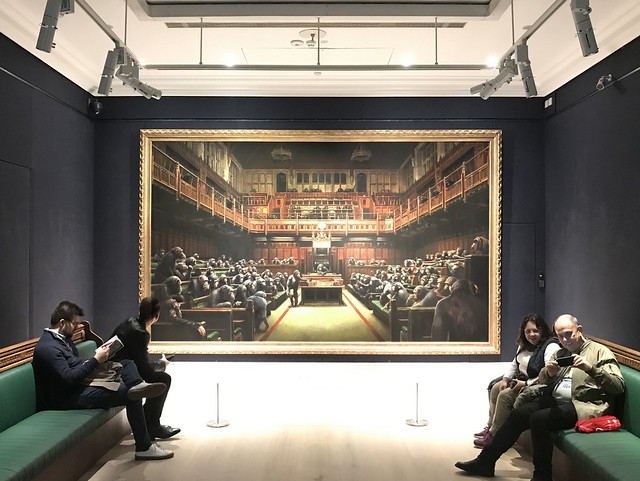 Banksy Devolved Parliament (photo 2019) (yes, the semi transparency of the dude on the left IS spooky)


The painting is being hyped up to set a new Banksy record. The last time the Banksy auction hyperbole reached such feverish levels was exactly year ago in, guess where, Sothebys! It was that infamous Girl With Balloon/Love Is In The Bin shredding stunt. Remind yourself of that moment which made Banksy the best known living contemporary artist then/in history/today. 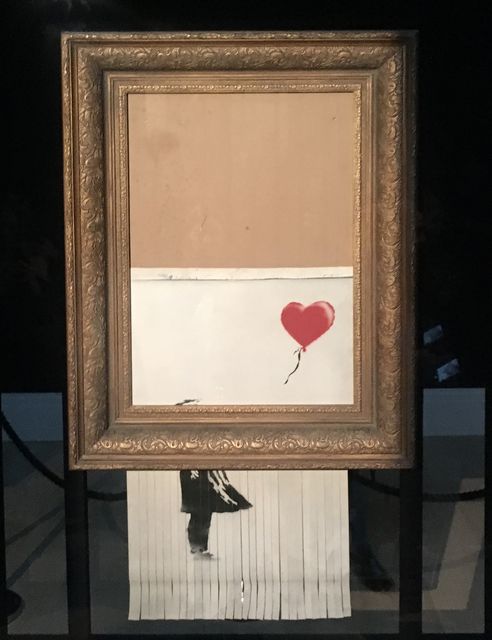 This Banksy is identified in Sotheby’s catalogue quite categorically as the one that was exhibited in Bristol in 2009 but there have been a few subtle tweaks. The lights in the chamber have gone out, much like our hopes of a proper orderly outcome to the political farce currently playing out daily in this sceptic isle. 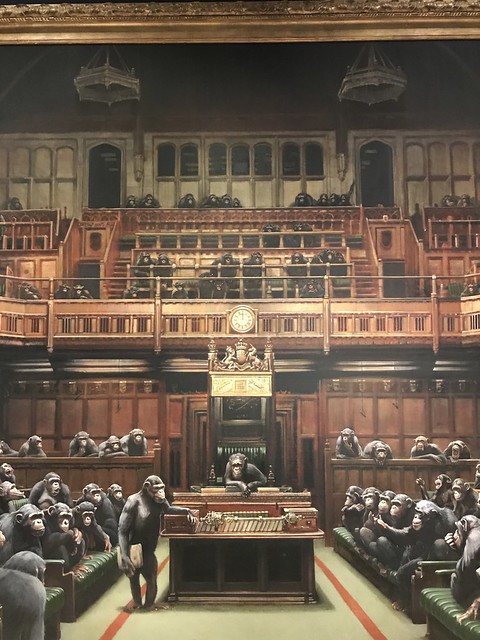 
Also, in 2009 we had a Labour (sort of leftish) Government led by Tony Blair and in the 2009 “Question Time” on the then labour benches which are to the left as you look at those photos, there was a chimpanzee holding a tumescent banana which curved upwards. The catalogue notes that the present owner acquired this painting from the artist in 2011, by which time we had a coalition Conservative/Lib Dem (fairly “right” though nothing like as rightwing as now), Banksy had reworked that banana so that it droops, it curved downwards. 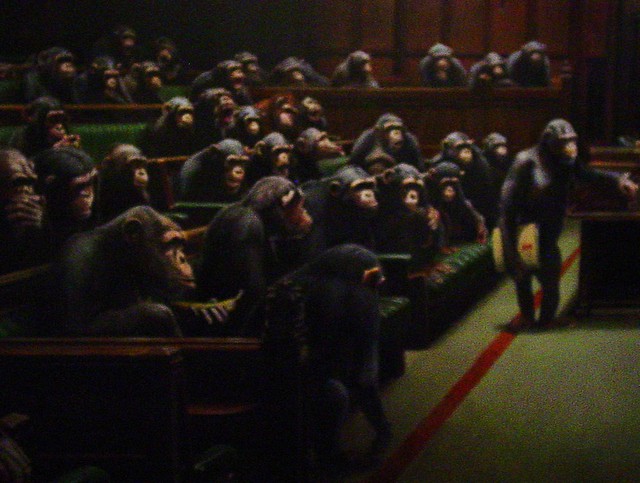 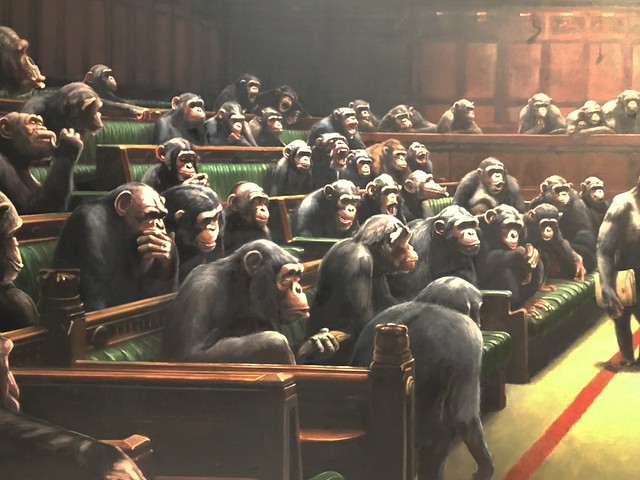 
Just one more thing, the catalogue informs us that the painting comes “from an important private collection” – apart from what it says about Banksy’s direct sales client base, vague bollocks like that truly marks the art world clambering up its own self important fundament!

Links:
Girl With Balloon/Love Is In The Air review on Graffoto

All photos: Dave Stuart
Posted by NoLionsInEngland at 19:22