Diggin In The Archives 3

Four weeks of Lockdown now, most sensible countries have extended their lockdown period for a few more weeks but don’t worry, the archive isn’t going to be running on fumes any time soon.

The relationship between impact and size is not at all clear in street art. Isaac Cordal's forlorn concrete figures were found in nooks and cranies in London over several years from 2010. Spotting them was difficult, how the artist installed them at their illegal elevated perches was inspiring. A few survive to this day. 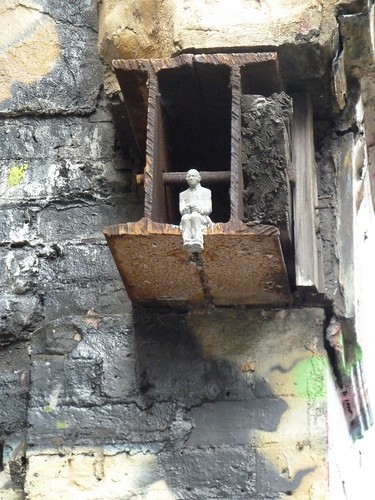 
As a great fan of stickers it is a bit remiss not to have looked back at some great stickers of times past. PS, or "Public Spirit" was an amazing sticker artist, the examples here date from 2010 and 2011. PS was comfortable with a range of styles from fantasy illustration to op art via pure abstract geometeric but always in a very distinctive teardrop style. The first sticker in this series has a little clue how to look for the initials PS embedded in the swirling shape of the art - other than the purely symmetrical ones (so far as I can see anyway).

At least one PS sticker dating from that period survives in Shoreditch. 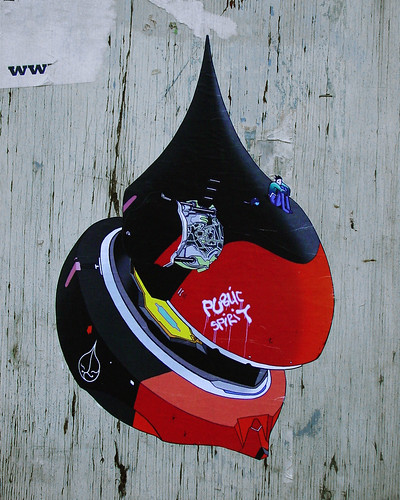 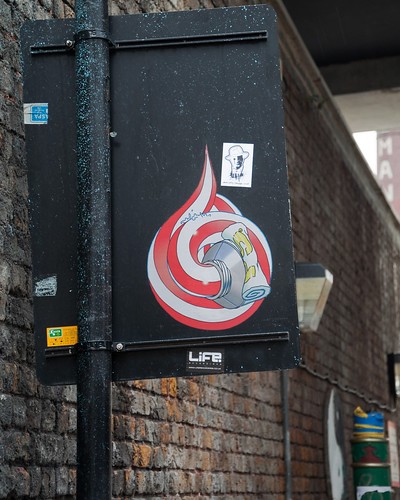 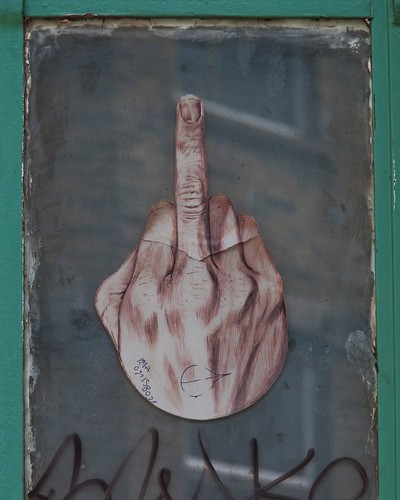 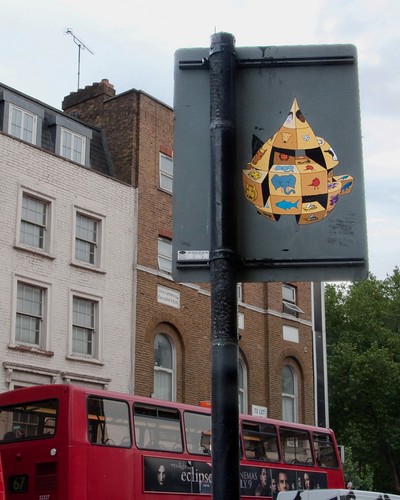 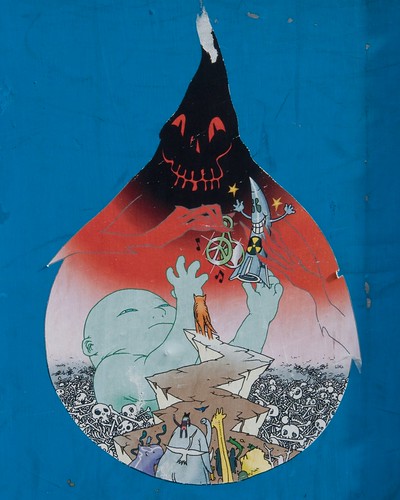 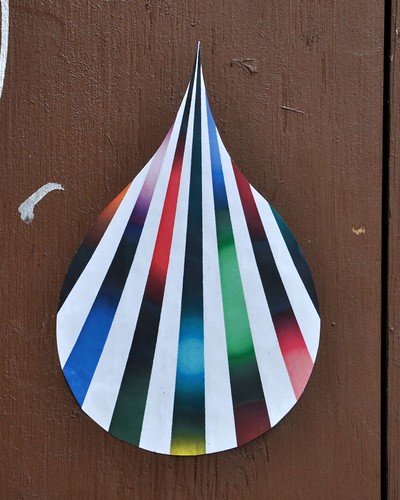 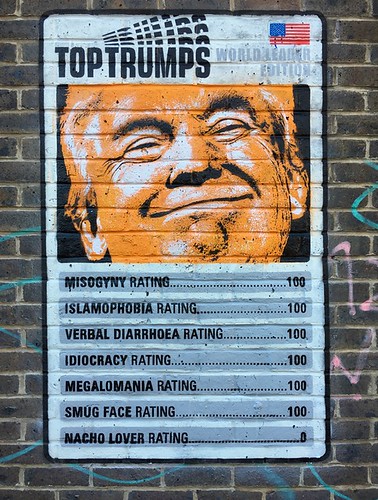 
Burning Candy represented by Cept, Sweet Toof, Tek 33 and DScreet had the first spot on lockdown for many years. The Garage owner received a council enforcement notice demanding the piece be buffed but flatly refused. Garage now rolled over by development. 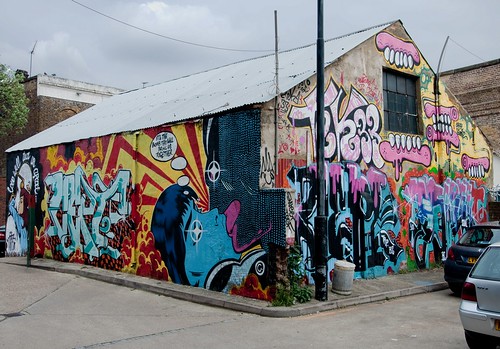 
Burning Candy at its largest grew to 9 members, the next photo features two of London's hottest #rooftop kings of that time, MightyMo and Goldpeg 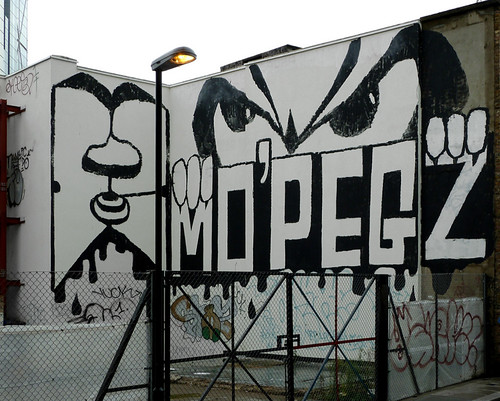 
Otto Schade painted very intricate musing on human emotions using a stencil technique, symbolically connecting the emotions and the nervous system to external stimuli. This was one of his earliest ribbon paintings on the street, the owners buffed this very shortly after Otto finished it. 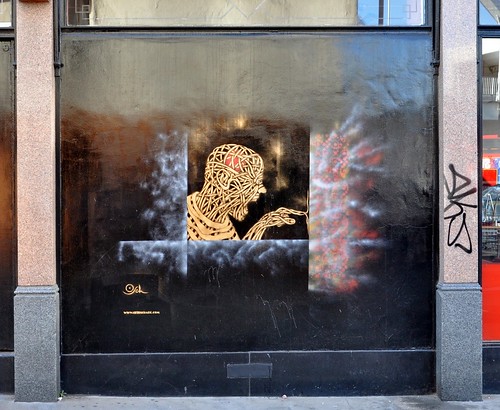 
Stewy Stencils populated Shoreditch and Norf London with a menagerie of animals, reaching a zenith with the size of this horse. The horse appears to be tethered and getting fed, not sure if that was Stewy or a clever augmentation by someone else. Either way its great when there is a little more to the stencil than just a spot where there was no cctv. Then virgin wall, now a hotel stands on the property opposite the Pure Evil Gallery. A version of this horse closer to Brick Lane was brilliantly augmented by Saki, might have to dig that pic out later but let’s hope we aren't in Lockdown that long. 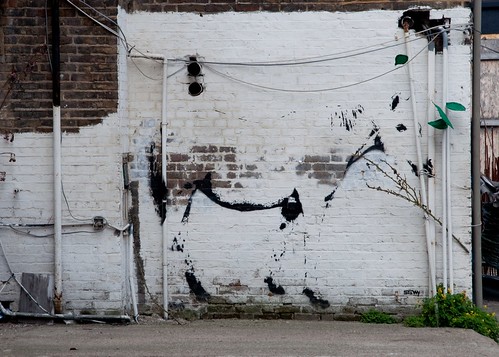 
From the days when artists did find virgin unpainted derelict walls in Shoreditch. "Plastic Bones" Best Ever v. Deadleg 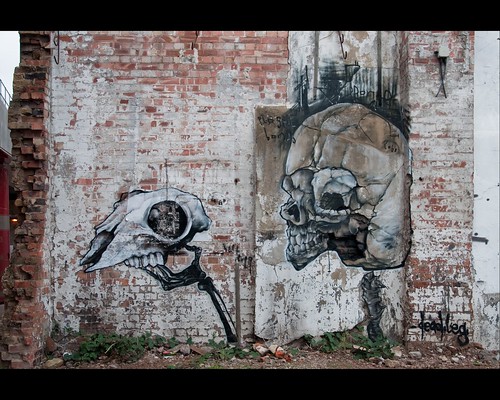 Art credits and links are by each photo. All photos: Dave Stuart

Posted by NoLionsInEngland at Sunday, April 19, 2020