Robbo vs Banksy - Did You Think It Was Over?

This post is written by nolionsinengland and is not necessarily reflective of the thoughts of co-bloggers Howaboutno and Shellshock, in fact they may not even be my friends any more!


About 4 days after you read it here on Graffoto, The Times proclaimed ”Not since the rivalry of Picasso and Matisse.... has there been such a clash between artistic camps". But this isn’t about The Times dissing us when it backed the only facts in its belated article as “The Graffoto website claimed that..”, this is about the ineptness of their headline “Banksy rival King Robbo has the final word in street art feud”.

The backstory in brief is, Banksy had a confrontation with London graff pioneer and legend Robbo resulting in a slap to the face for Banksy. Banksy painted over an ancient 25 year old Robbo throwie, days later Robbo struck back with a reworking of Banksy’s effort. 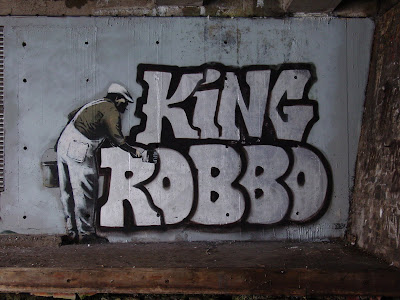 Graffoto had a tip that there was more to come and so it proved, Team Robbo returned to Camden canal and modified another of Banksy’s masterpieces. 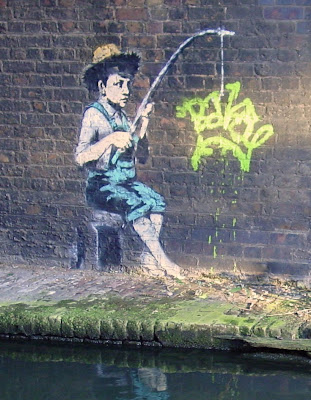 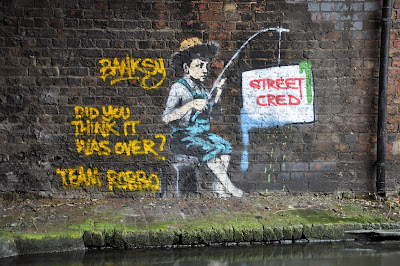 This latest Robbo intervention lacks the killing finesse of “KING ROBBO” but carries the fight back to Banksy, who without doing anything is looking like a wounded animal.

The personal aspect of the Robbo/Banksy handbagging and the merits of the work produced in the feud have really become a sub-plot to the Grafitti vs the whole of creation posture-fest, so lets concentrate just on this second phase of Robbo’s riposte to Banksy. The original Banksy artwork employed street art stylisms to proclaim a message in general about the ubiquity of graffiti tagging and specifically about a society that equates the tag to rubbish fouling the canal. Banksy stencilled a boy fishing a Banksy tag out of the canal. Robbo has turned it around completely and now the fisherman is Banksy, neatly labelled in case there was any doubt and nattily attired in country garms befitting the “bumpkin” slur flung by the capital’s graffiti community (Bumpkin is a term of endearment used by London writers for any writer from the provinces).

Banksy’s catch represents the charge made by the graffiti community that Banksy is exploiting the culture of graffiti to boost his personal profile, by linking himself to the world of graffiti he is latching onto the maverick outlaw kudos, the artworld bonnie and clyde. Although Banksy’s haul is drenched in blue water, Robbo shows a clump of canal slime dredged up with the placard so neatly incorporating Banksy’s green drips as a consistent part of his composition, avoiding the need to go over Banksy’s green drips with blue.

Robbo is fully aware that his 25 year old piece and this episode with Banksy has become a major cause célèbre, press coverage and (at time of writing) over 300 comments on his flickr pic would see to that. He has neatly brought the direct personal nature of his action sharply back into focus by addressing a written message to Banksy alongside the modified artwork. 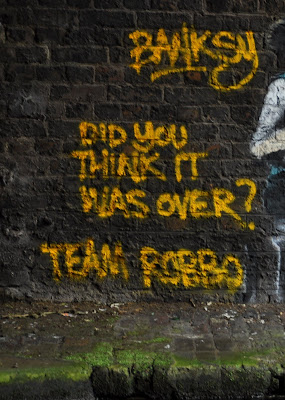 Memo - from: Team Robbo; To: Banksy


Did Banksy expect to provoke such a vicious reaction? Probably. He is and for years has been a seriously skilful publicity magnet and knew this slur would not go un-noticed. Despite what some say he knows the graff mentality well enough to guess that this would go beyond the single handed scrap to a battle between two related cultures, a battle to which only one side has turned up.

Should he have expected a response from Robbo? You betcha. He knows graff well enough to appreciate how grudges can fester and dissing is rarely allowed to go un-mentioned.
Was a prolonged backlash expected? Perhaps not, although quality beef generally assumes significance way beyond the original slight and graff never forgives and it never forgets (check London’s ATG/GSD rumble).

Is that the end of Robbo’s vendetta? Well apart from the two already taken apart by Robbo, Banksy laid down two other pieces of street art that December night. The stencil rat [http://www.flickr.com/photos/nolionsinengland/4199814591/ ] is so poor it might best be left as testament to an embarrassing lapse of quality on Banksy’s part but the best piece of the four fresh Camden Banksy’s , the pure letter “Global Warming” slogan looks like its message is begging to be modified 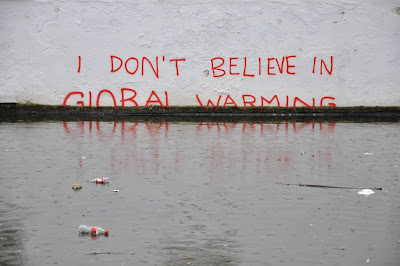 
And of course, there is Robbo’s public memo to Banksy to be taken into account.


We also shouldn’t rule out Banksy returning to the fray, he isn’t exactly shy about expressing himself on walls and he has some previous in harbouring grudges. Famously (to a small niche audience) he didn’t invite another Bristol stencil master Nick Walker to his Cans Festival and spitefully painted a flat cap wearing monkey painting flock wallpaper, generally regarded as a pointed slur at Walker and his art. 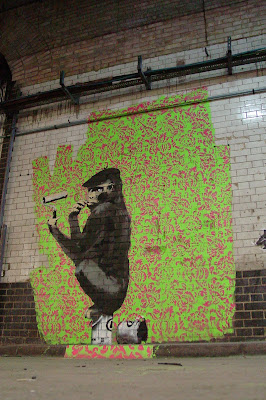 
It seems more than just coincidence that Banksy’s canal-side art was produced within days of his former mentor and PR guru, now Worlds-Leading-High-End-Street-Art-Gallerist-Bar-None Steve Lazarides arranging for some of his stable to paint canal-side pieces just a few miles away near Westbourne Grove. 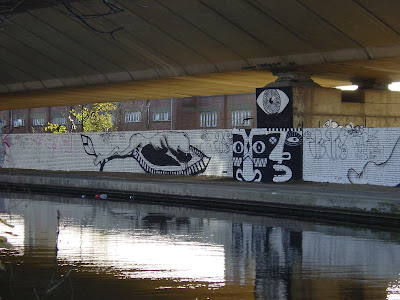 
As an aside, those canal spots were popular with West London taggers and writers, the world of graff didn’t make a song and dance about street art intruding on its territory, it just set about its business of reclaiming the walls in its own brutal style. 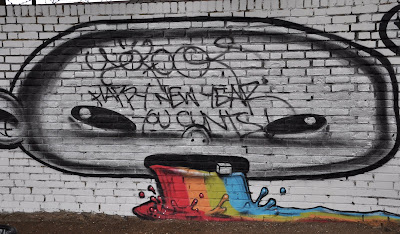 
Banksy knows the graff culture well enough not to be surprised that painting over Robbo produced a response. He would have expected it, he may not have expected the nuclear scale of the reaction online and in the press though and as it stands, he is eating Robbo’s dust in everyone’s minds.

You might find it interesting to read the Graffoto original coverage of Robbo’s Christmas day riposte.