Posted by NoLionsInEngland at 20:19 2 comments:

Crunching up the gravel drive to a flight of steps leading to a house in a posh terrace set back from leafy Clapham Common, we peered through white double doors in an anonymous raised ground floor entrance.  As a setting for a cutting edge urban art show it seemed quite unlikely, we turned on our heels lest they set the hounds on us.  A door creaked open and a voice called “Looking for the art?”

The premise behind "disCONNECT" is that someone with money has bought a seriously expensive house and prior to doing an iceberg basement redevelopment job has invited 10 artists in to make-over the premises.   Viruses escaping from labs threw a spanner in the works though, so several of the artists incorporate a sense of the pandemic in their pieces and 6 of the artists being based overseas had to make and install their work using Skype, like scientists cautiously tweaking the location of the reactor rods by remote cctv. 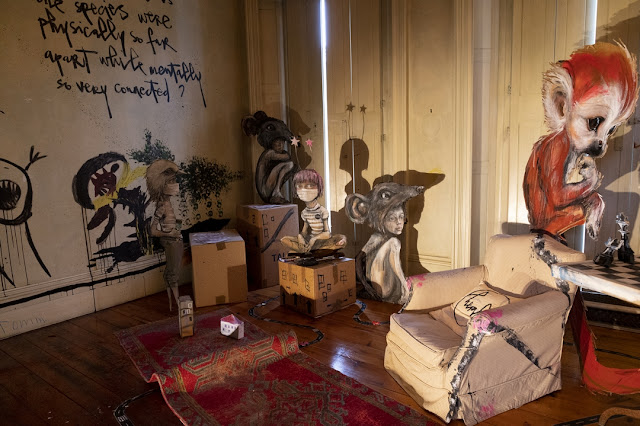 The Art world is not providing too much in the way of real life excitement these days and while one should never confuse the art world with the real world, or indeed the world of street art, it was a pleasure to experience disCONNECT for real just before it closes this week.

If I had been asked 2 weeks ago to guess which artists would feature on my uploads more than once in the next month, it would have been a hell of a rollcall before the name Alex Fakso came up.  This legendary trainyard graff snapper specialises in candid portraiture; his  2012 “Santa in Camo” show in Kensal Rise indicated a quite idiosyncratic approach to subject as did his 2017 Moniker contribution.   In this installation crowds in the photos rush towards the viewer in a way that feels horrifyingly alien in these public-gathering avoiding socially distanced coronavirus times. 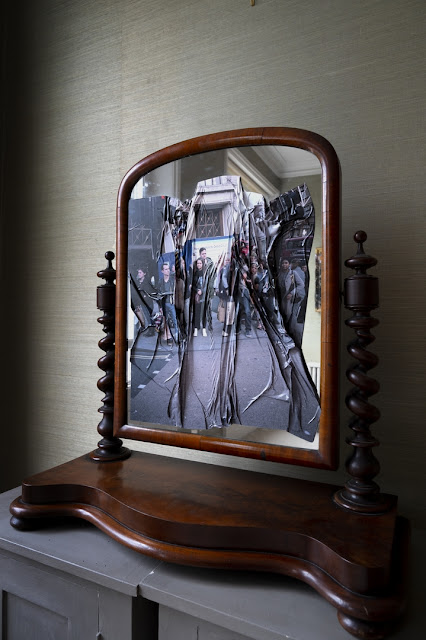 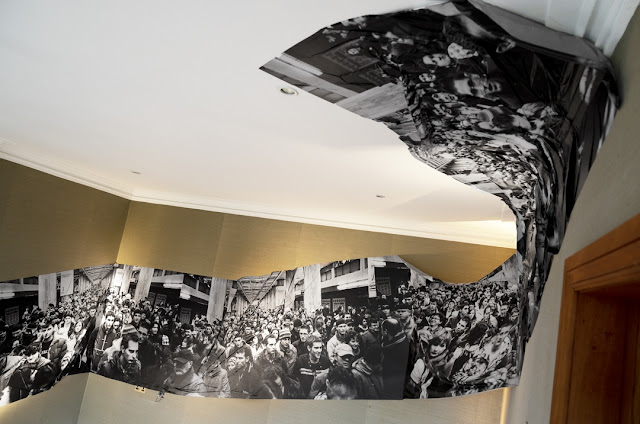 Seeing Zoerism’s geometric and intricate graffiti on the streets is a rare pleasure and his anamorphic experience echoed that hugely detailed style.  Anamorphic images are designed to be viewed from one spot and look a bit skew-whiff from any other, this image was installed flat on the floor and up against the wall creating this impressive 3D “trick of the eye”. 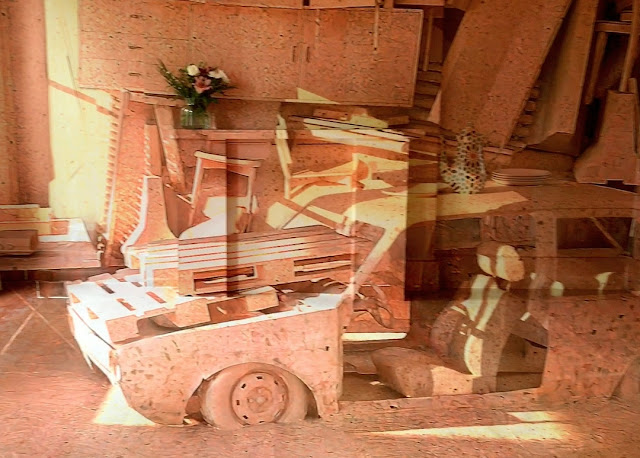 Herakut’s fusion of photorealism and spindly elfin characters in Davy Crockett hats shouldn’t work but looks awesome.  You are invited to sit for a selfie with the monkey in the nursery -  if your chess game is up to scratch.  The kids in the playroom have painted child-like drawings on the nursery walls, they are credited to a 7 year old Ryker but is there a hint of an insider joke there? 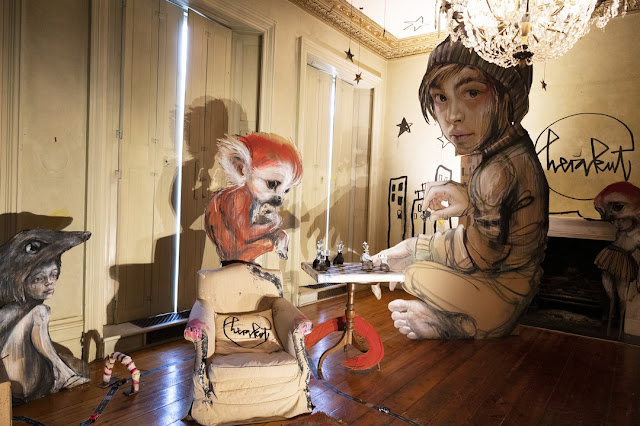 A double set of doors and a single door were shipped to Portugal for Vhils to work his magic, a refreshing reminder of his talent for “discovered texture” portraiture.   His mining into layers of adverts to reveal portraits works superbly where it belongs, out on the streets but it’s a bit of a puzzle why having an implausibly deep block of compressed billboard adverts would work indoors. 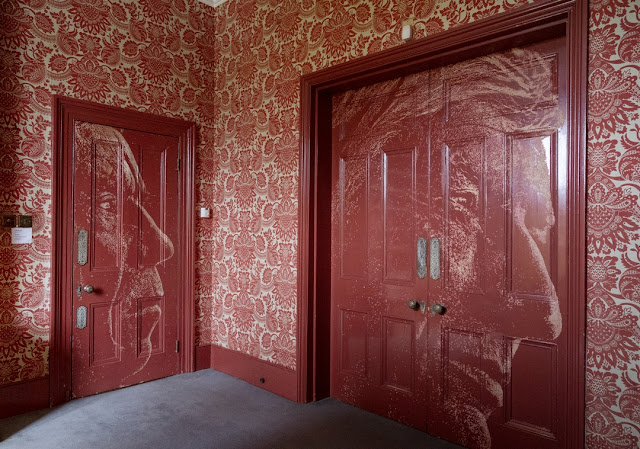 The dark entrance lobby was made over by a collection of Mr Cenz’ cosmic ladies, UV light brought sharpness to the highlights that define the outline of the faces, an effect we love to play with when photographing his portraits out on the streets.  Unfortunately we omitted to get any photos in the lobby though the effect can be vaguely appreciated in this mercifully brief video snippet.

In lockdown Aida Wilde railed against the reckless anti social behaviour of people ignoring the social distancing, lockdown "stay-the-fuck-away" instructions.  Her “Granny alley” installation in the most challenging room in the house distills a lot of that passion and anger into blocks of text and her emoji infused pseudo-flock wallpaper. 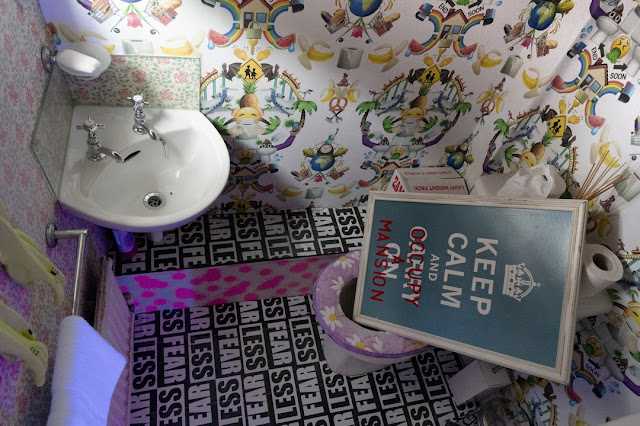 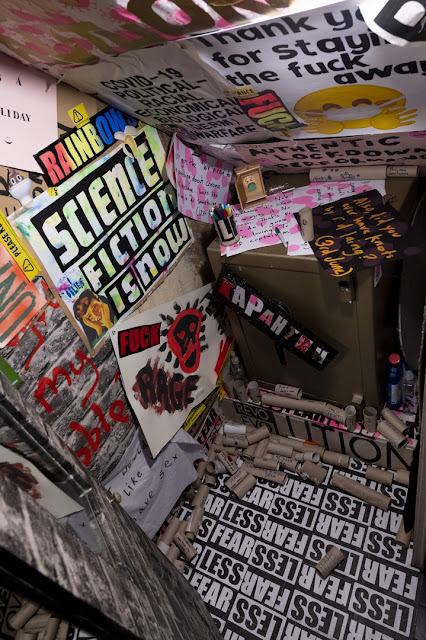 After years of vicariously enjoying Icy and Sot’s art finally we saw a piece in real life.   The dining table apparently was found in the kitchen, in which case it must have been a relic from the downstairs kitchen many years ago.  The beautifully conceived and executed articulated plates and cutlery apparently represent capitalism with the extension leaves up and a full plate on the table.  With the extension down symbolised socialism, in which case this neither-up-nor-down configuration pretty much sums up post-Corbyn Labour. 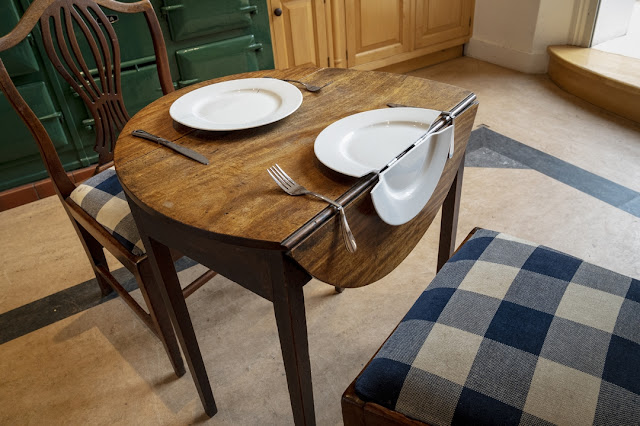 Issac Cordal’s morose concrete figures endured this Summer’s monsoon in the garden and just about maintained their social distance in a gloomy basement. 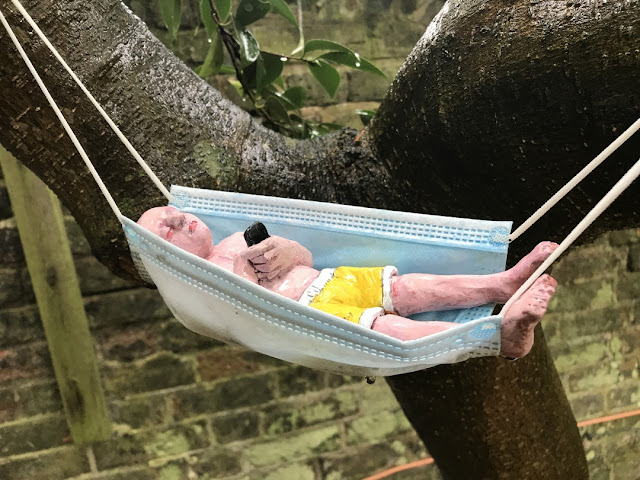 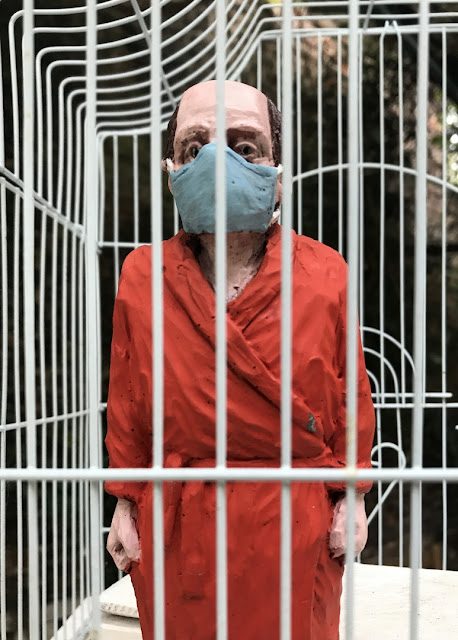 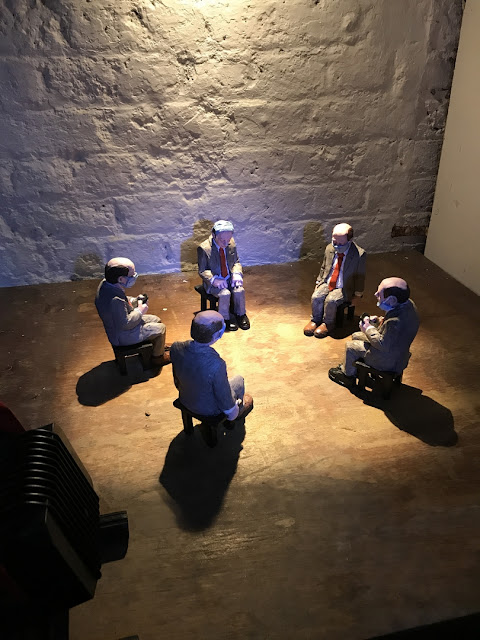 Flock was clearly in vogue when the house was last given a decor update as the pattern recurs in several of the installations.  Adam Neate bid for the window blinds and the colour and texture makes a great skin motif in his ghostly portraiture 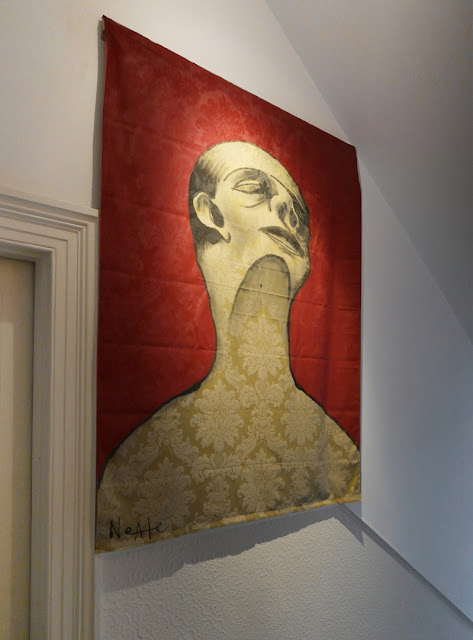 This show exceeded expectations, though that says more about our expectations than the artists involved. The unbalanced capitalisation of the show title exhorts to us to somehow re-connect in these desperate times where isolation is salvation and this show is worth connecting with.  Time is running out though and indeed thanks to covid restrictions tickets are very limited.

All photos: Dave Stuart
Posted by NoLionsInEngland at 09:56 No comments: