K-Guy - Under The Mattress Banking

Northern Rock had a run, house prices fell off the cliff, Lehman Brothers went to the wall and we all suddenly became bank owners as the government miraculously suddenly found billions and billions of quid to bale out the banks. This pisses K-Guy off, and he likes a rant and a rave and taunts hypocrisy, greed and stupidty. A month ago to the day, he set up his shrine “In Loving Memory Of The Great Boom Economy”. 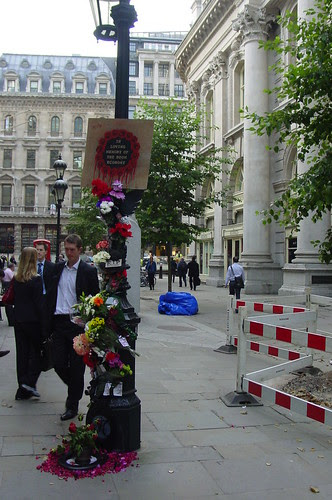 That piece deservedly got global attention but even as he executed that installation he was already developing his next idea and last night, four locations around the City Of London (well, perhaps one or two were just over the edge) acquired new branches of the age old tried and test Sleep Easy Family Bank. 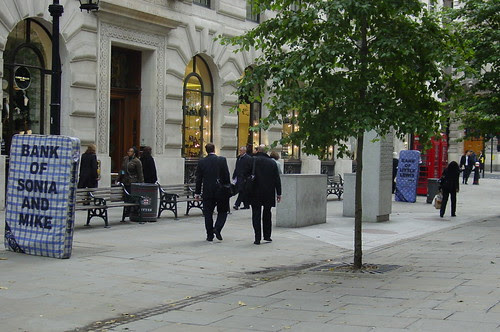 It did for K-Guy's granny in her time so why shouldn’t it do today? Think of the benefits – it’s highly personal, as Sonia and Mike may testify. In fact, you can make out the fistfuls of cash sticking out of their mattress (K-Guy loves the details). You can withdraw however much you want, whenever you want, say happy bankers Mike and Trish of City Road – their branch cheekily placed right outside Barclays Bank. 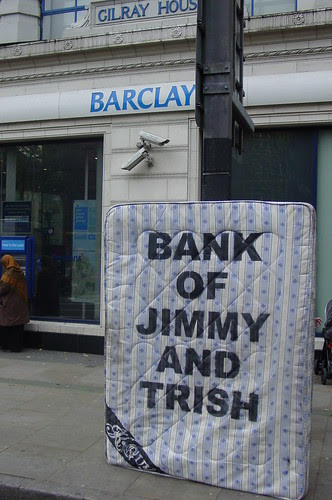 Pause for moment for a little story about the practicalities. Do you have half a dozen mattresses going spare? How do you transport them? Apparently K-Guy was spotted driving up from his reinforced economic bunker with three double mattresses tied to the roof of his car and two single mattresses in the boot. Vigilant PC Plod, in unmarked wheels, pulls him over and enquires “pray tell what is afoot, you looked like a slice of bread surfing a pea as you approached”. Thankfully the explanation that the ensemble is on it's way to Shoreditch to be part of an art installation is entirely satisfactory, indeed almost completely predictable for that area. It’s amazing sometimes how you can get away with it simply by telling the truth.

Another advantage of sticking your wad under the mattress, the interest rate is low according to the Bank of Stef, who obviously owns a bank and keeps other people’s money under his mattress. 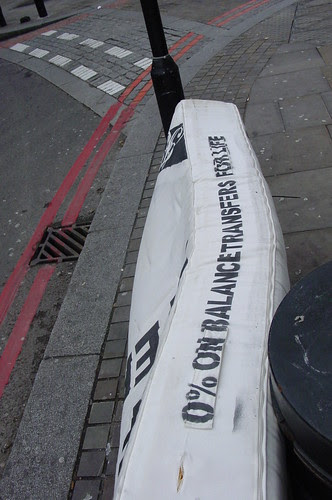 Even a small one will hold quite a lot of money beamed little Lewis, age 5, outside Royal Exchange. 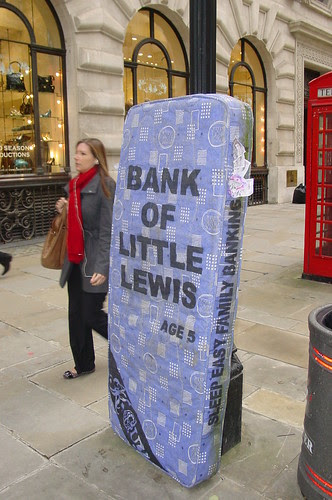 Four out of five of the K-Guy pieces had disappeared before lunchtime today making the word ephemera really too elongated for describing the lifecycle of this work. Children – taking rubbish off the streets, stencilling on it and puting it back out on the streets is still going to look like rubbish to 99.9% of the world’s jobsworths with a pick-up. 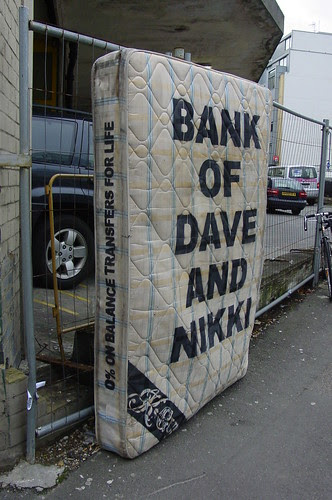 The current edition of a street art/graphic design mag contains the ludicrous claim that Hush is the only serious contender for the heavyweight belt currently worn by Banksy. Well as long as ideas, wit, placement, attention to detail and satire have anything to do with it, K-Guy is likely if he keeps this up to soon be twirling that belt over his head before throwing it in the bin. 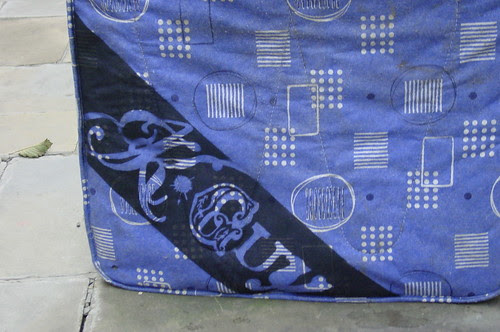 Email ThisBlogThis!Share to TwitterShare to FacebookShare to Pinterest
Labels: K-Guy

I wasn't such a fan of "In Loving Memory Of The Great Boom Economy" for whatever reason, but these mattresses are a great idea. I people in the states who have been taking money out of the bank even though all or most of their money is insured by the federal government.

I didn't understand this work until I read this article

hmm, for you to stash your cash under the mattress it needs to be lying flat. and something about the neatness of the stencilling makes it seem like some kind of advertising.

so I like the idea, but it falls down on those two points above. maybe if the text read "The Only Bank You Can Trust" it would have made more sense to people, and would have a more direct message

Mattresses making a statement on the streets! Great art installation.