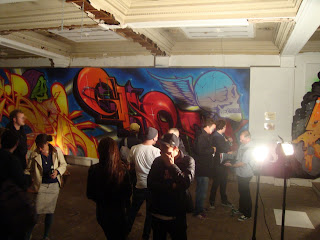 
The derelict feel and distressed textures of the large single room floors and cavernous basement create an ideal ambience for graffiti art. Upon entering at ground level the first explosion of colour and elaborate writing comes from three floor to ceiling pieces by Giroe, Gary and Roid. Giroe and Gary look more or less exactly as they would on a street wall, a crisp clean riot of colour. 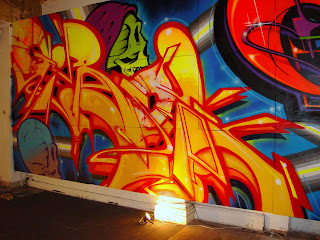 
Roid’s writing outdoors takes the law of the letter and throws the law away, deconstructing the alphabet to the point of virtual illegibility to all but the most tutored eyes so it is a surprise that for this indoor show he has gone for a less wild word form, making the lettering more legible whilst setting them against a backdrop belching comic style smoke trails. 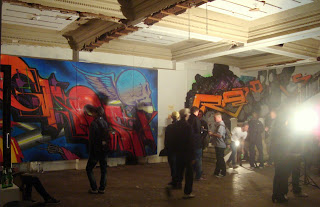 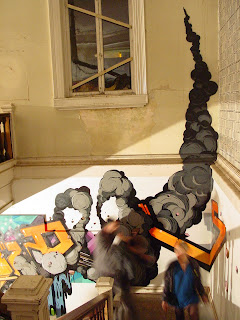 Another bit of Heavy Artillery info, there are twelve members of the HA crew, 9 of them have work in the show – Alert, Rench and Relay missing. Upstairs the standout piece is a combined mural and installation by HA’s friend INSA. Its centrepiece is a dulled down version of the chrome arse from his “Looking For Love In The Wrong Places” show set into a circular black and white vortex flanked on either side by female posteriors , each caressed by a hand whose nail paint features a mash-up of the classic INSA pink, black and white stripy heels, a pair of which adorned a suitably willowy lady enjoying the show. INSA has enjoyed a trigonometric exercise by creating a visually complete circle drawn across a floor and ceiling each intersecting a half cylinder recess, a interesting multi-dimensional draughting challenge. 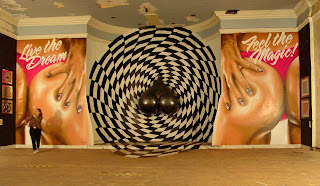 
Giroe, aka Jiroe in the world of graff which encourages writers to vary the spelling of their name for greater opportunity to play with letters, has created a multi-media portrait which is mainly spray painted on the wall but the eyes are light up by swirling projected fractals, whilst the teeth change colours in a way that would have dentists taking up drugs. Very psychedelic. 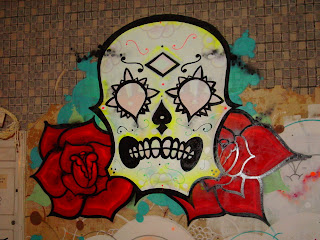 
Gebes has done the half-height burner on wall and integral canvasses thing, several of the canvasses are filled-in outside the graff outline with fuzzy coloured strips, a motif which re-occurs in Gebes more abstract – give or take the occasional inter-galactic astral carrot - canvasses. 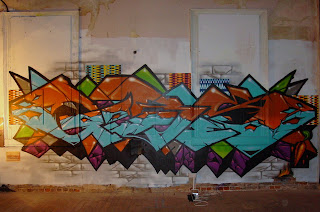 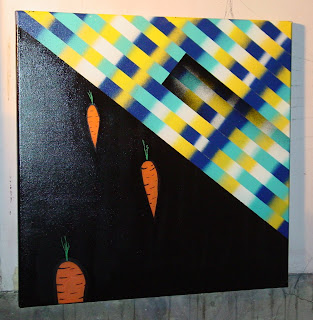 
In the basement HA crew are a touch more focussed on art created for canvas rather than across it. That said, Storm has a graff styled “S” with a faded fill and “Heavy As” tag on canvas which almost looks as if it might have been surgically extracted from a full Storm dub. If graff elements in your home is your thing then this or two other canvasses with HA tags might be picked up for only slightly more than the original release cost of a TOX print. 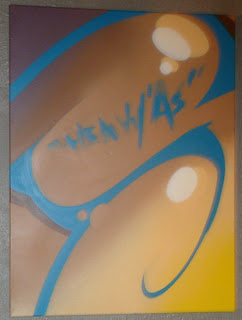 
Mr Wany has contributed three diminutive canvasses each featuring a single surreal character that share a pinched face appearance with characters often featured Mr Wany’s external walls. Letters are woven into the work both visibly and also in a very subliminal way deeply disguised in the paint, the lettering is so light it has the appearance of vestigial remnants of painted over previous work on the same canvas.


One end of the cellar consists of a dirty wild urban graff tableau created by Odisy complete with discarded cans on the floor, picture the crazy archaeology of colours you get on an illegal wall built up from generations of throwies, tags and characters, all of which can be made out in the aerosol mix. Four large portraits on canvas blend into this backdrop but have been hung tilted from the ceiling about 2 feet forward from the background – Odisy wants to separate his art from the graff. 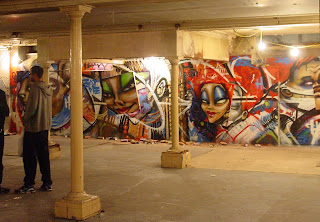 
Stepping back from the work reveals the characters as actually integral with the mural behind. The secrets of Odisy’s art alter ego, Alex Young are really kept close to the chest in this show with only one example of his pointilist style tucked away two floors up between INSA and Gebes.

At the opposite end of the cellar, one of the highlights of the show displayed on a rough mural featuring an assortment of his characters are the decks, canvasses and paintings on found materials contributed by Nylon, the second non HA writer and artist to be honoured with an invitation to share the HA love. A particular favourite for its rich colours, heavy paint and rough surface texture is Zulu. In the flickr show set (link below) is another pic showing the lush surface finish to better effect. 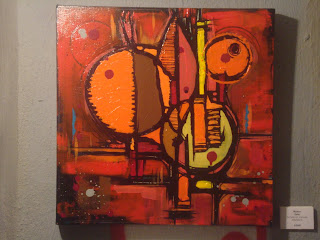 
Twesh has been full on writing his name on a basement wall in his usual catenary style with outrageous variations in the proportions of his letters, taking one example the word stretches to scratch three canvasses, one pair, a diptych just about embrace a fragment of the “T”, the other feeds off an apparent explosion of particles (Structure 01.mb) blowing into a graphic of modernist architecture. 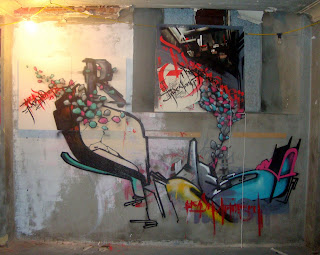 
The crowning touch in both sets of canvasses is Twesh’s calligraphy, written in diagonal layers, its curvaceous beauty is almost the diametric opposite to the wanton indecipherability of the graffiti’d name they spring from. 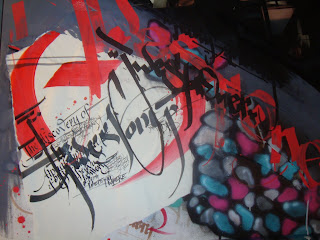 
Prescription Art has a spectacular space in Brighton with perfect run-down grandeur for graffiti art shows and on all three floors the artists have made great use of the architectural nooks and crannies. 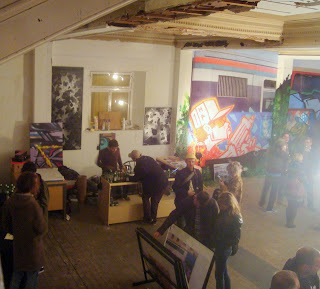 
The previous HA show at prescription Art in August was dominated by over sized graffiti names done over a wall and canvass melange and I had hoped to see more of the art skills of these graffiti writers, all of them are accomplished artists outside the graffiti genre. A large burner across a set of canvasses rarely results in anything other than crude fat cap abstracts whose individual composition is almost entirely an accident of positioning within the piece rather any particular artistic intention. Maybe the randomisation is a valid artistic device in itself but there is little doubt that this wasn’t meant as a significant conceptual exercise. Where the crew – and friends – have got out the acrylics and other materials the results have generally been exciting, it would have been great to have seen more of this. 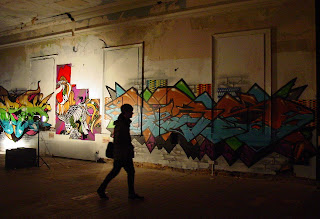 
The show is one for fans of graff and is a lot better for not behaving like it needs to create converts, when graff gets evangelical it tends to castrate itself and make tame, crowd-pleasing adjustments, thankfully Heavy Artillery haven’t felt the need to go down that route. The show title itself comes across almost as a challenge, you hate us and we don’t care. 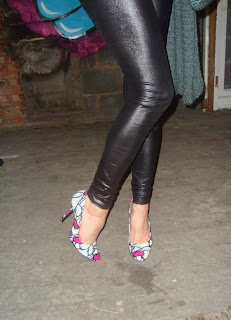 
The un-even localised gallery lighting makes photographing this shit a bit tricky, it’s pretty certain that the colours showing up in the flicks are probably not the colours you would see with the naked eye in daylight.

Regrettably with a lot to gas on about this ended up too long to include relevant street pieces. Check out a big collection of the HA street work on Heavy Artillery’s crew flickr. 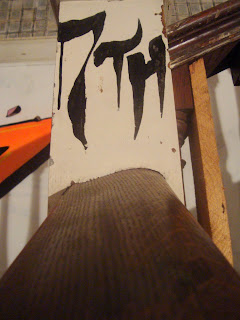 
Likewise, Nylon’s stuff here. INSA has a website yer. Finally, this write up contains more photos of HA pieces that it does the art work, check my show flicks here for some more HA art.
Posted by HowAboutNo at Wednesday, October 28, 2009