Mike Ballard has done two previous illusion room shows. Amid the intense imagery fusing fine art collage with wild style forms and the synapse searing contrasts of the black and white colour scheme, Graffoto has never really done justice to those experiences. His latest illusion project is located in a private upstairs room above the Macbeth Pub, Hoxton St, London. This time Graffoto asked Mike Ballard to talk us through his latest wall, ceiling and floor illusion installation, then decided to throw away its own rulebook (though no one could find it so we think it got thrown away long ago) and let the artist speak direct to you in his own words.

“The title is The Shadows of Tomorrow. As in today is the shadow of tomorrow, and just sort of now...Present and stuff. Taken from the Madvillain tune 'shadows of tomorrow. 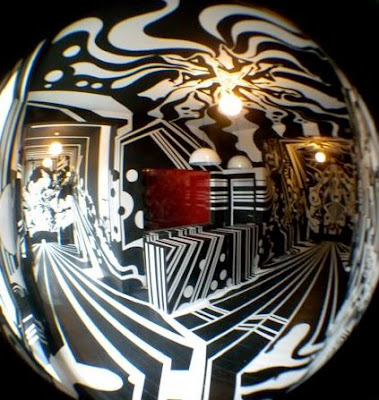 
The character with the rays coming out of his eyes, that’s Vision, but in negative. 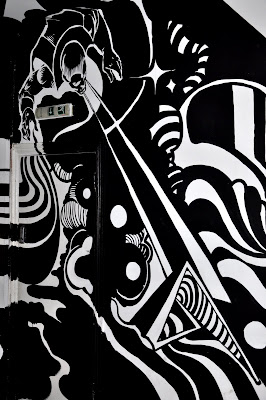 The first ceiling focal point is a man exploding, just opening to the universe,he looks a little bit like Jesus but its actually a silhouette of Quasar from the comic era. I thought I’d put him on the ceiling because its [like] opening up to the sky. 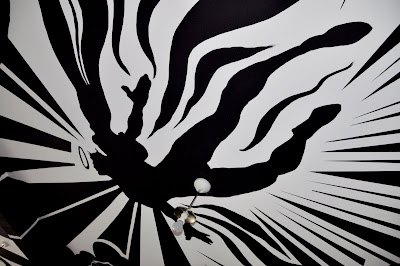 There are power figures like the wolf, the superhero, and the face looking backwards is a really graphic version of a character from Carravagio. Then it goes psychedelic with the doors leading out to the universe, mortality, double skulls. This looks like a turban but its a chest, I mirrored it there, on top of the cloak coming down then it starts going into a bit of wild style. 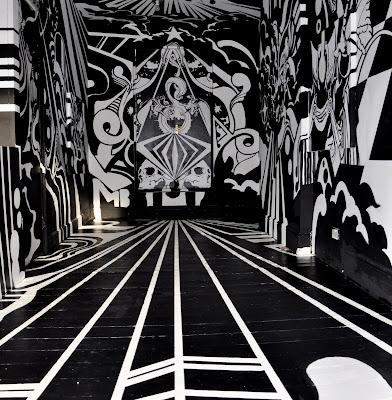 The other ceiling focal point is based on synchronised swimmers, I did this stop animation of this clock ticking round – I thought it would be a good centre piece,. The first focus is more of an explosion but this is more of a 60s trippy looking and round here, more false perspective type thing. 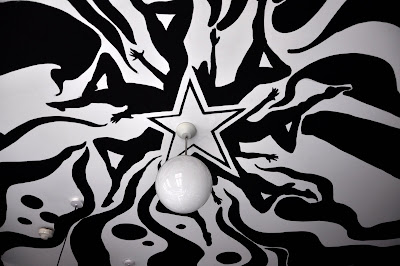 Down the other passage [along front of building] we get mystical again with this horse, a power figure and these dismembered bodies, is part of a sketch by Rubens, part of it is figurative, then the female superhero’s arm is going up and another superhero with a knife where the horse’s second leg would be and then it just flows of into style. 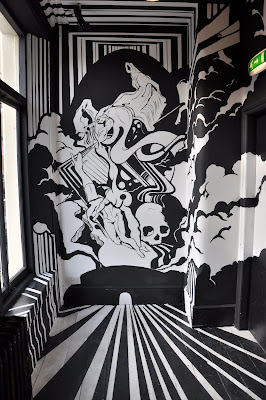 The fissure, the crack is the cosmos all just opening up, the clouds, the energies, the dust from the hooves from the horse, then a bit more planetary solar system stuff, and then..i just thought the girl looked right painted opposite. At first people didn’t see the girl, until I joined it up with the ceiling. Since I did the rest, the girl and the animals have become a bit more visible. 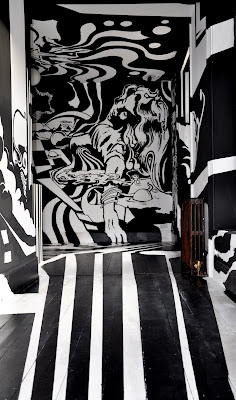 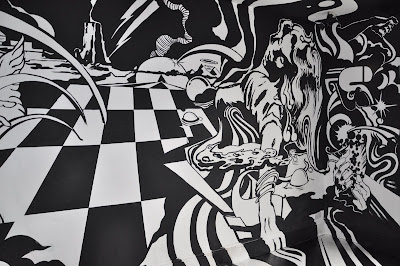 This is not so much an exhibition, i was commissioned by the pub to install all this painting, i am working on a lot more video and collage stuff for a show later on in the year which is more the direction i am on at the moment.

I just like to muck about with the perspective and the scale of things like the size of this girl compared to the horse, just throwing it in, it’s just a weird jumble of things but it has this energy, I’m really into the horses and the clouds from the hooves, energy, dynamic , battle things. 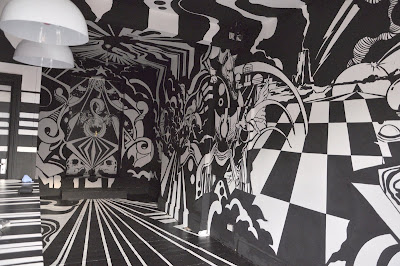 I’d say it took a week and a half solidly, the floor will get fucked up, that’s why we varnished it.

Next one after this, I might try different colours, red and white, blue and white. 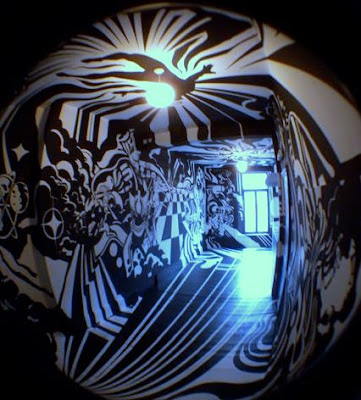 
The first Ballard room was installed at the Cept v. Mike Ballard in Dalston, the room was an irregular shape entered by going upstairs and down stairs and under half height barriers, think something like a children’s bouncy ball den but marginally more sinister. The second was The All Of Everything, a celebration of the life and demise of the University of The Arts, London which was the last show in the space before it was knocked down to make way for the new Cross London line.

Unlike the those two Ballard rooms, this one is likely to last. Check out upstairs at the Macbeth Public House, Hoxton Street, London. Ongoing! 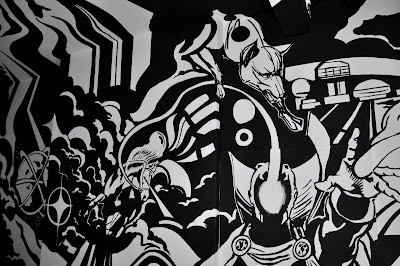 Posted by NoLionsInEngland at Saturday, May 01, 2010