Many moons ago Banksy came up with a fairly comical visual joke involving a policeman and a line of coke, the policeman would be stencilled on wall and a meandering line of white paint would be dribbled on the streets. Wry chuckles all around at The Snorting Copper. 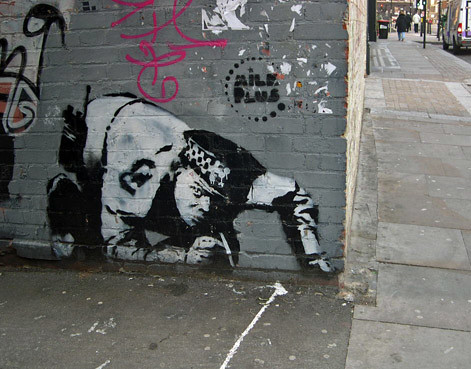 
One of these existed in a narrow alleyway off Curtain Road in Shoreditch, it was heavily jet washed in May 2006 but in September 2006 the white line of coke was still quite clear, as demonstrated by the-artist-formerly-known-as-little-miss-no-lions who “walked the line”. It went from the copper’s nostril, down Mills Court alleyway and then disappeared down a drain nearby in Charlotte St. 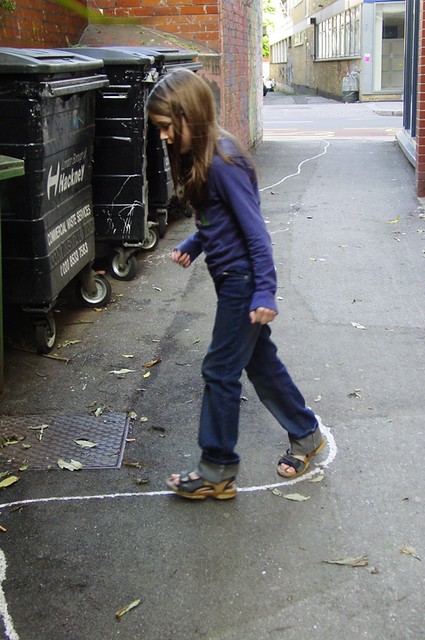 
Hot news is that developers who acquired the derelict property bounded by the wall the snorting copper was painted on have re-discovered the lost and forgotten Banksy work of art! We had an ominous feeling about this when we spotted a section of framed brickwork wall on the building site in Autumn 2015. 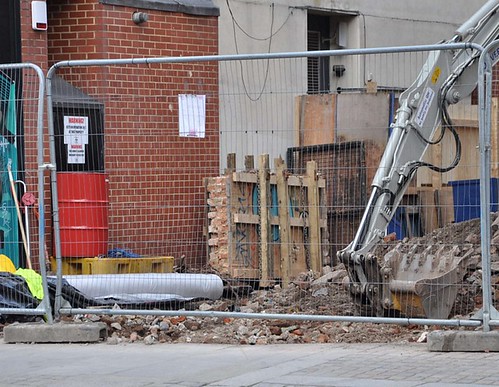 
The news first became public in a slightly curious way back in August and the media outlet with the full scoop was The Guardian as it often is with Banksy matters though I must confess to possibly having blown the chance for a little insider insight into the project a bit before that. Hey-ho, no regrets! 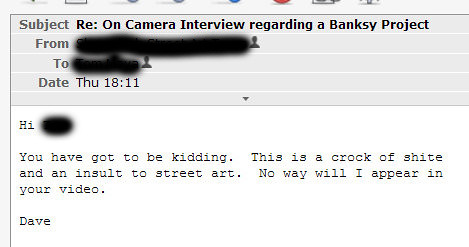 Finally, a couple of months on from that preliminary teaser the Snorting Copper was revealed during last week's London art festival week, and what a pristine specimen of Banksy street art it appears to be! 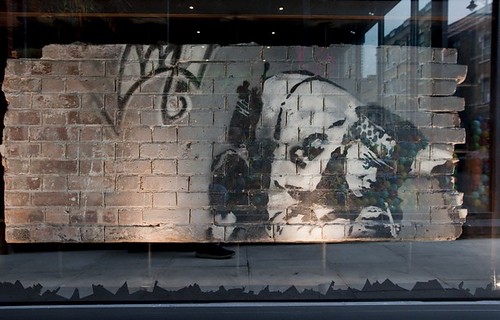 
The developers who brought the property cut the wall out and shipped it to restorers who did their job and the brickwork is now back in place, albeit protected indoors, at the original site. 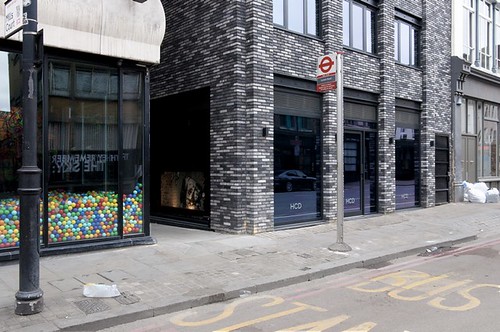 
In the press the developers talk commendably of their excitement at possessing an original street Banksy and of their desire to make it visible to everyone, while the restorers talk briefly of the restoration process, stripping back layers of paint until they found Banksy’s paint.

That vagueness draws a veil over a minor miracle for the art restorer has managed to go from something that back in 2006 had been blasted back to bare brick over most of its surface to something that looks like Banksy might have sprayed it last night – with thanks to Martin Bull for this photo. 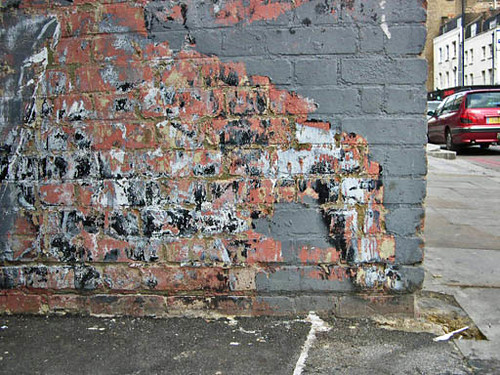 The condition of the Banksy certainly did not improve with age, here is a photo I took of a glorious portrait of friend and truly awesome New York street art photographer Luna Park as rendered by Elbow Toe, there is barely a trace of paint left on the brickwork, indeed judging by the noticeably reduced amount of grey paint and the loss of substantially more of the copper it appears that a further spray-jetting took place between the taking of these two photos. 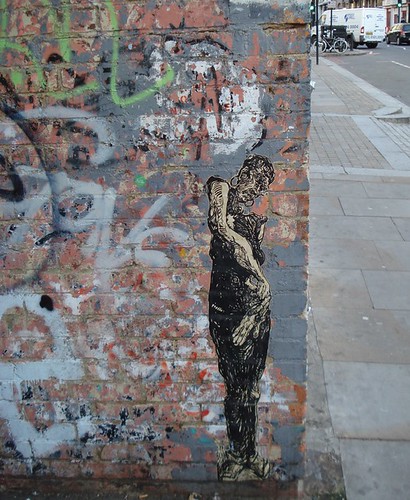 
The wall then changed appearance many many times over the years, including the occasionally complete buff. 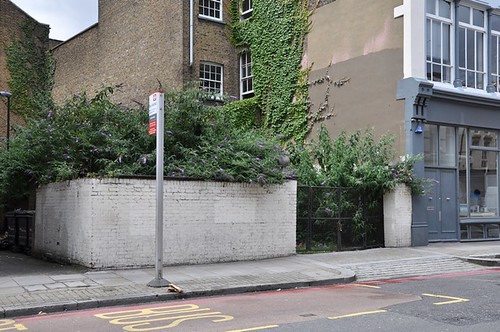 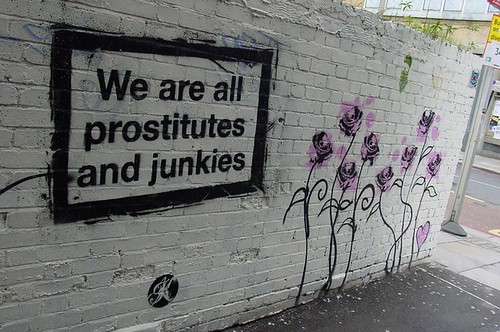 
The restoration and sharing of this Banksy zombie at one level may be applauded but it is sadly flawed in one other major respect apart from its provenance, the copper no longer has a line of coke to snort!  That line of coke was an absolutely key element of Banksy’s artwork and its absence nullifies completely the dynamic of Banksy’s joke. I wonder if you gently scrap back the tarmac in the alleyway would you find Banksy’s original line – call a restoration company quick!

Among the many aspects that raised eyebrows a minor curiosity is that a fairly significant portion of the copper's left arm is missing.

One other thing that stretches credibility is the £1.25 million valuation given in August. Leaving aside a little chuckle at the common art world code words “just for insurance purposes”, it always embellishes an article about Banksy if you imply “look, this is graffiti shit but now it’s worth loadsamoney”. However, there is almost no supporting evidence to suggest that any Banksy should be valued at close to that amount. Banksy did a collaboration with Damien Hirst on canvas which sold at a charity event in New York arranged by Bono and Damien Hirst for USD1,870,000 which was then about worth about GBP980,000. This is his most expensive sale ever publicly recorded but the Hirst factor and the unhinged bidding that can take place at charity events make this an unreliable indicator of Banksy’s value.

I’m indebted to my great friend and co-blogger Shellshock aka Martin Bull for his insights and opinions and of course his photos. Martin devised the infamous Banksy Tours of 2006 and based on that research and experience went on to publish Banksy Locations and Tours Vols 1 and 2 which are most likely the source of the recorded location as mentioned in the Guardian’s August article, mind you that isn’t much of a commendation as that article also contains an expert’s claim that no one knew where it was! Clearly quite a lot of us did. 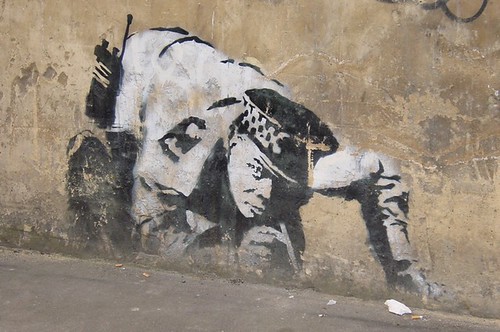 All photos copyright Dave Stuart except as noted

Posted by NoLionsInEngland at Tuesday, October 10, 2017

So pleased you picked this one out for scrutiny Dave. I was trying to get my head around this one!!! How could a buffed Banksy come back to life?. Only the artist could have made that possible and that seems very unlikely indeed... I hope the new owners put a plaque up saying "Banksy once painted on these bricks, beware of fake imitations and blood suckers".... Thank god for people like yourself and Martin who have trawled the streets of London recording walls of street history!!! Evidence now available on what was once seen as mischief but now detective work paints a picture of street art as being good or even better than gallery art. May your camera and note book stay on the beat snorting every last drop. Somewhere down the line all will be reviled... Brian Ferry sang Love Is A Drug.... Maybe just maybe art is the medicine... But some we must take with just a pinch of salt!!!!! A highly commended post Dave.... Thanks for posting....

Man With A Camera Photography said...

I didn't realise The Snorting Copper appeared in multiple locations.
I had only ever thought it existed just off Shatesbury Avenue which is where I came across it. Did it appear in other locations too?
There are a couple of photos of it in this article I wrote - https://www.manwithacamera.com.au/banksy/

The pictures on your blog post of this piece are both of the same piece on Curtain Road, Shoreditch? The only other one I believe existed was at the entrance to the Leake Street Tunnel, and actually looked to have been a separate and larger stencil than the one on Curtain Road.

Great pictures though, and thanks for stopping by and commenting.