One question I always flounder with is “Who do you think the up and coming future stars in street art are?”, like I have any idea about art picking! The easier question is “Who has emerged?” and if there is one person who can’t be left out of that answer it is French artist JR. JR: Chronicles at the Saatchi Gallery is a comprehensive examination of JR’s very impressive back catalogue of art on the streets. Through a succession of rooms a large number of JR’s street projects are reprised, dissected and explained, the best part of a couple of hours is recommended. 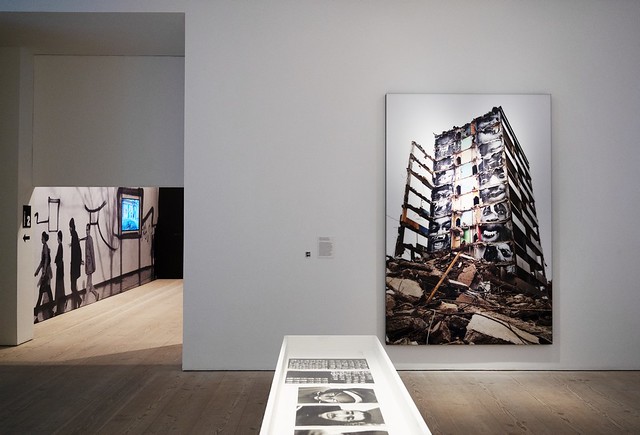 Portrait Of A Generation inside demolished building


JR’s artistic origins were as a not terribly stylish tagger in Paris who chances on a camera, takes some pretty cracking photos in fairly lairy sink estates dotted around Paris, print them out super cheap and pastes them up on the streets. Among the images is one of a young video maker surrounded by local “yoots”, that cameraman is now better known as the award winning director Ladj Ly and just to digress for a moment, watch Ladj Ly’s 2019 “Les Miserables”, it makes a superb companion to this exhibition as a semi fictional and unaffectionate look back to the environment that shaped JR’s early adult life. 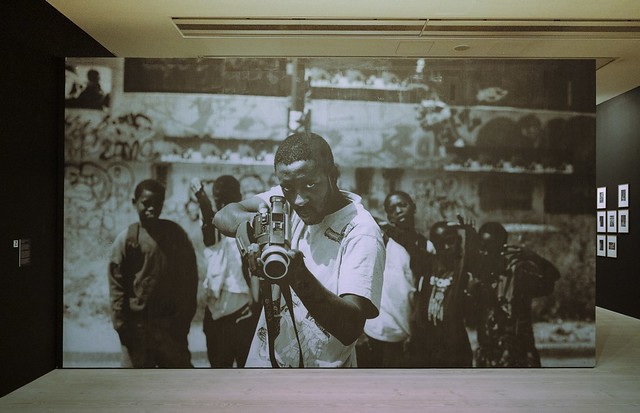 
If you haven’t spotted the jarring “trick of the eye” in the Les Bosquets photo, if you find it inexcusably intimidating well you’re not alone, JR tells us that when that photo was pasted on the side of the Tate Modern in 2008, the Director initially refused the image as he thought it was a gun as well. That was the point, JR was challenging your inclination to jump to racist conclusions. 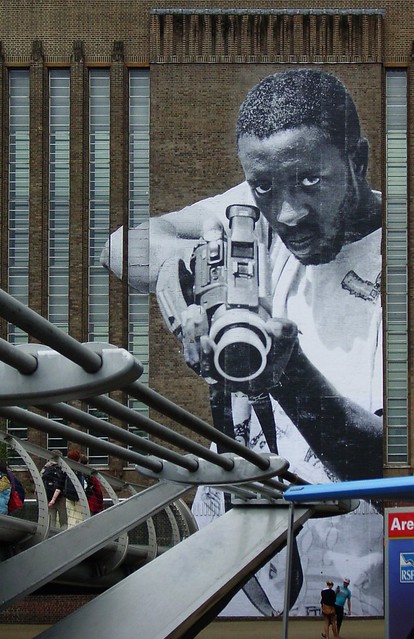 
Banksy’s first London exhibition was an un-authorised street take-over in 2001, JR adopted the same tactic in the same year. His “Expo 2 Rue”, translated as “Sidewalk Gallery”, involved guerrilla pasting his photos on building site hoardings and to add emphasis to his paste ups he sprayed picture frames around the paste ups linked together by straight lines. JR: Chronicles has a little humorous play with the form of JR’s Expo 2 Rue concept, a blown up photo of an Expo 2 Rue installation incorporates a video screen framed where the paste up was. “Tres droll” he probably wouldn’t say. 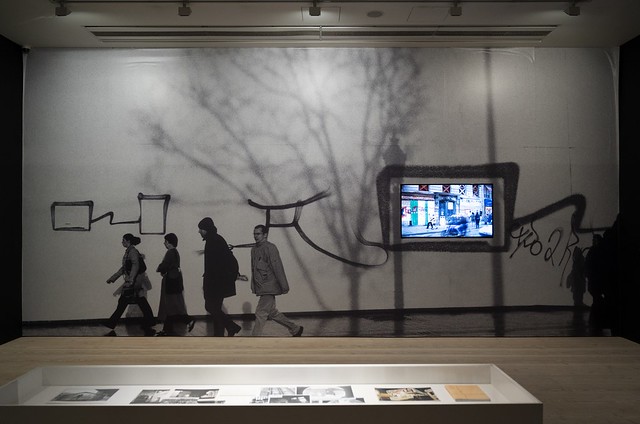 
The scale of JR’s achievements transcend the boundary between street art and fine art, appealing as readily to art world snobs as to people who would never normally contemplate attending an art exhibition. This can perhaps be appreciated by splitting his endeavours into three parts, vaguely and inadequately summarised (my inadequacy, not the exhibition’s) as Idea, Execution and Documentation. 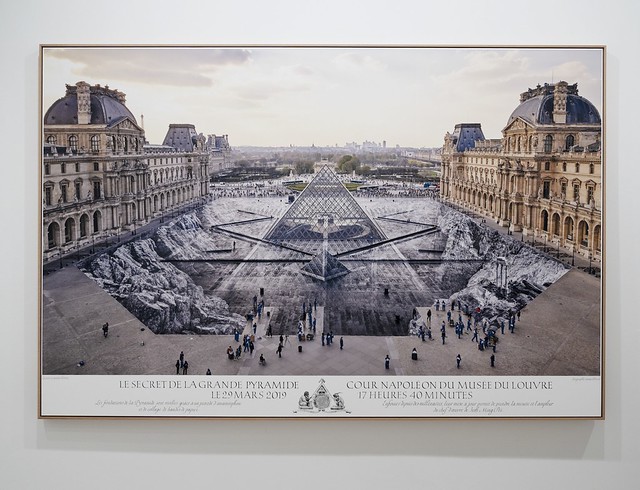 
The ideas and concepts are the things that earn JR a place among the giants of contemporary art in the “proper” art world, and galleries like Saatchi. JR has completed a very impressive number of major projects in what is still a comparatively young career. The hallmark of them all is quality and originality, from his Expo 2 Rue at age 17 to Women Are Heroes and Gun Chronicles by way of Wrinkles Of the City, Portrait of A Generation and more, a mere 7 huge rooms at Saatchi’s Kings Road art palace is barely sufficient. 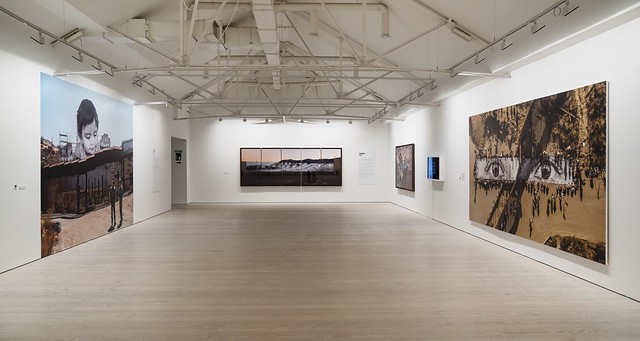 
If JR has a secret cellar to which failures are condemned, surely there must be some, it is well hidden. The execution of them is undoubtedly thoroughly thought through, one of his charming trademarks is corralling local volunteer’s enthusiastic assistance in putting up his large paste up projects. For those who may have no idea how printed street art can be created on such magnificent scale various display cases, models and prop do great job of lifting the veil on those production secrets. 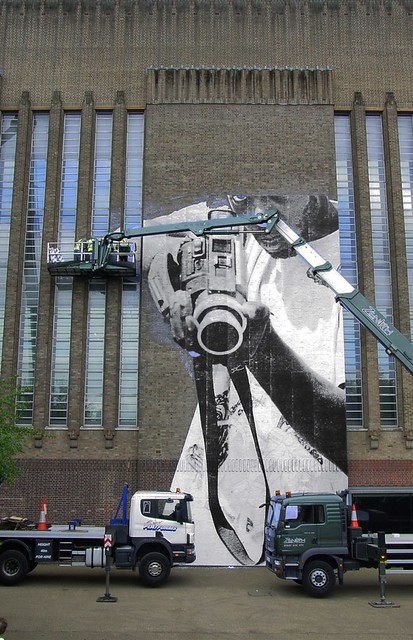 
How do you print out the images? They are all made from continuous sheets of paper 36inches wide and in one of the films you see an architect’s printer spewing paper like a long string of spaghetti; how many sheets? In one of the vitrines are JR’s working images with the construction lines drawn by hand which divides the image into the stripes for printing and ultimately for putting the strips in the right order, a laden trolley laden demonstrates how many rolls of paper go into one of those epic paste ups. 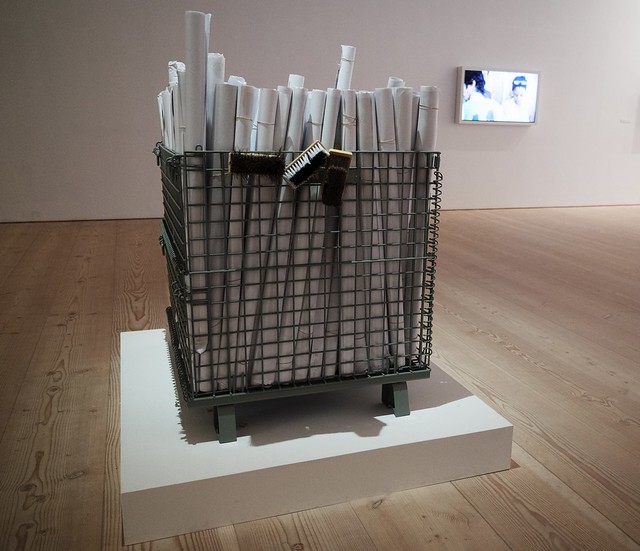 
There’s nothing quite so unpredictable as the public which coupled with JR’s “suck it and see” approach to putting up installations in locations where authorities are hostile (Israel, USA border) has given him a wealth of anecdotes which are well with tuning into, you can access that element online away from the gallery, treat it like a podcast. You might not find the “process” insights interesting, poor you, but scrutiny of those aspects can reveal secrets hidden in plain sight. The image of a tea party JR arranged to take place through the USA Mexico border fence is well known, JR explains in one of the videos that on the Mexican side they sit at a table; on the USA side the party was “guerrilla style” as the artist was denied permission so the party on the American side takes place not on a table but a printed canvas unfurled and passed through from the Mexican side. My chin dropped. 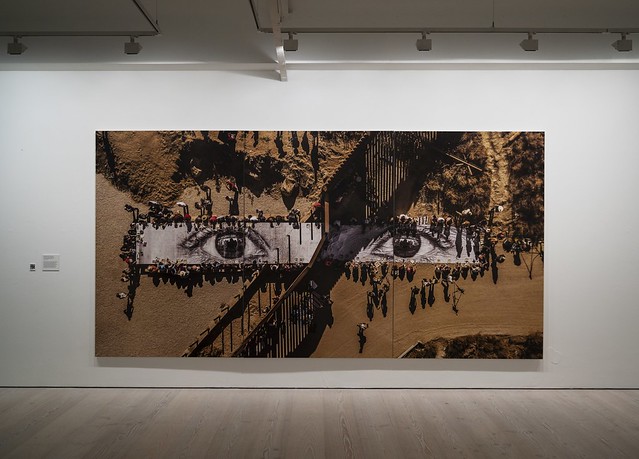 
JR’s contact sheets from earlier analogue photography projects are displayed in several vitrines in various rooms. In the contact sheet of the images of Ladj Ly holding his camera like a gun the famous image is the very first one on the sheet, it captures the ominous energy of the kids surrounding Ladj, in the other photos the kids were basically posturing and with the absence of spontaneity the menace becomes cartoonised. 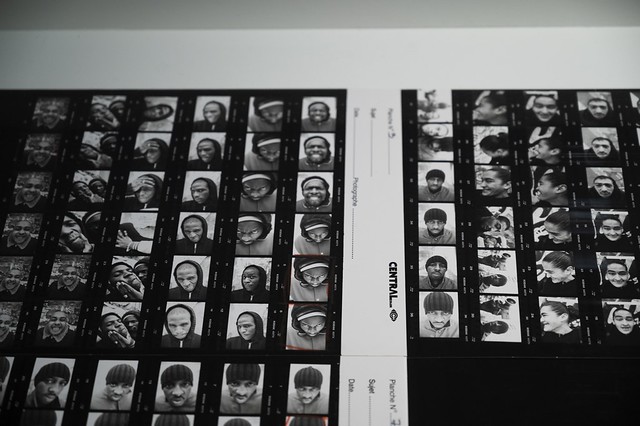 
The third pillar of JR’s enterprise is the element that allows JR to produce stunning books and exhibitions. It’s the documentation, JR takes brilliant photographs of JR’s photography projects! 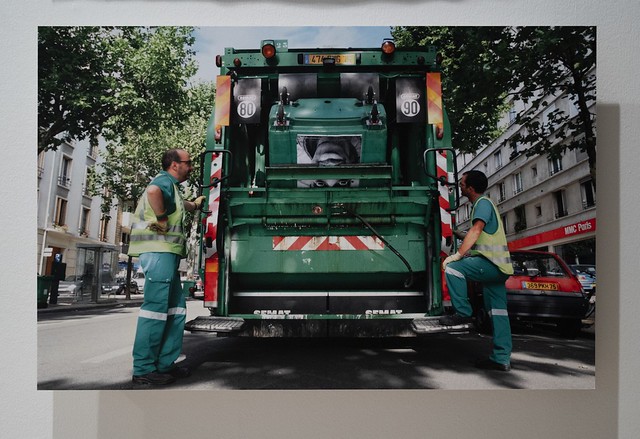 JR: Portrait Of A Generation


JR attributes his trademark hat and glasses to the early need to avoid being identified by a local mayor who wanted to sue him. He does however explain his art to camera in a comprehensive and articulate way but always in hat and glasses. For someone so preoccupied with anonymity shyness is not an issue! 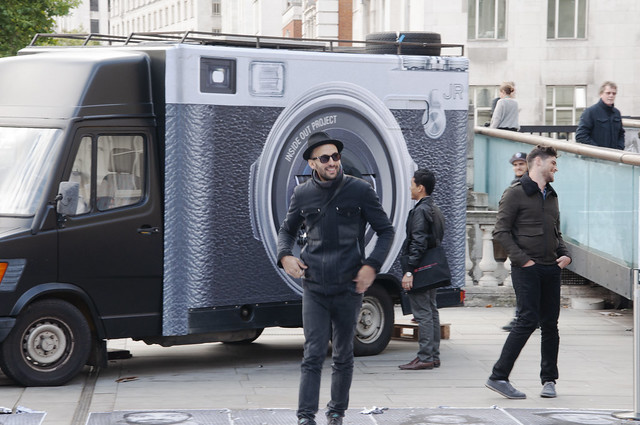 JR and Inside Out photo booth at Somerset House, 2013


JR does not sign his paste ups though sometimes the artist is unavoidably present at a microscopic scale, check the reflection in the subject’s eyes in, for example, the Nairobi train! 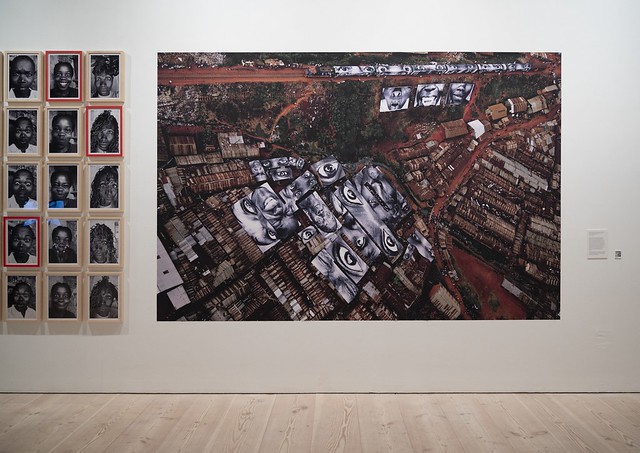 
JR’s projects are concerned with humanity, often illustrating the unnecessary impact that boundaries, borders and schisms in society have on humanity, or should that be the impact the unnecessary borders have? In essence he probes and highlights people’s impact on people. 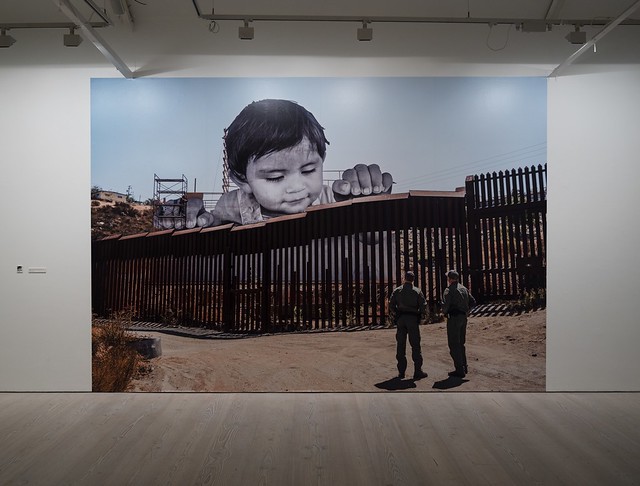 
The humanity becomes a teeming multitude in the Chronicles project, JR photographs up to a 1,000 people in basically the way they would like to be photographed then collages the individuals into a huge mural. There is a tendency for the impact to resemble a hyper realistic nightmare or disaster movie. Jr toys with your own interpretations of the evidence of your own eyes, is what you see really a violent disorder, or is it actually a community out playing and dancing? 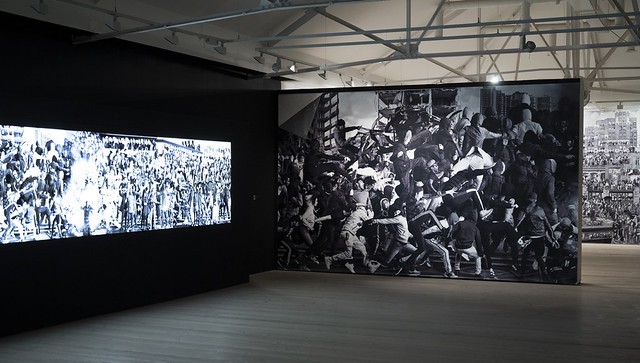 
Another thing that the show achieves which you can’t really replicate on a book or in a tiny screen is to impress with the scale and the level of detail in the augmented reality Chronicles. Download the JR – net app then point your phone at the relevant Chronicles mural causes a pointer to skip from person to person in the mural and through the magic of multi media you can hear that persons’ story as recorded by JR. Gun Chronicles occupies the whole of a large wall and incorporates 245 different viewpoints on the gun issue. JR avoids casting judgement, pro and anti Right To Carry folk are included and your reaction to the arguments tells you all you need to know about yourself rather than the issue. Good luck on completing the dive into the stories of all 1,128 citizens in The Chronicles Of New York City! 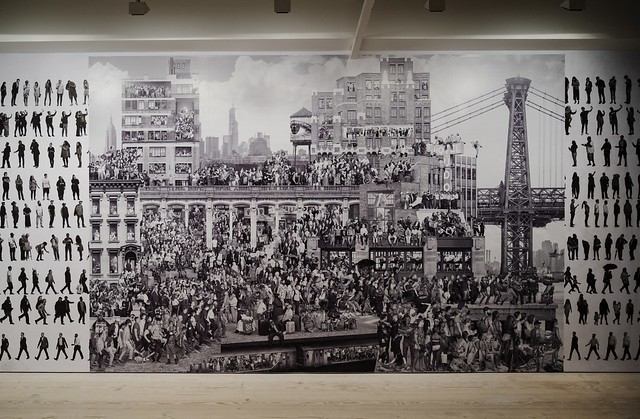 
The opening of JR: Chronicles in June was accompanied by another iteration in several London locations of JR’s Inside Out project. This manifests as a travelling photo booth in a van modified to look like a polaroid camera where, after a long queue, your photo is taken and printed out on a large sheet and pasted on the ground like a massive outdoor version of a school yearbook if you went to that kind of school, not me! 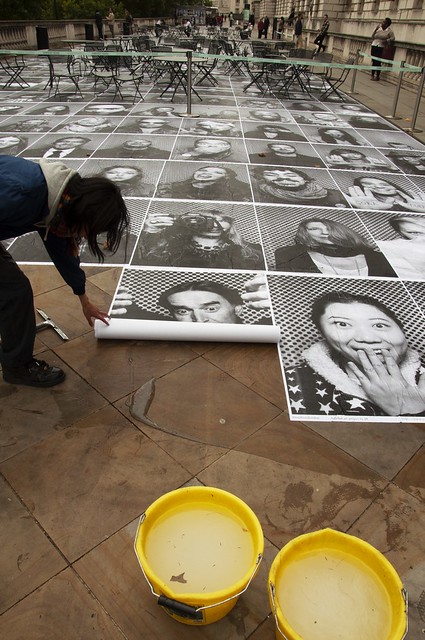 JR Inside Out Project, Somerset House 2013 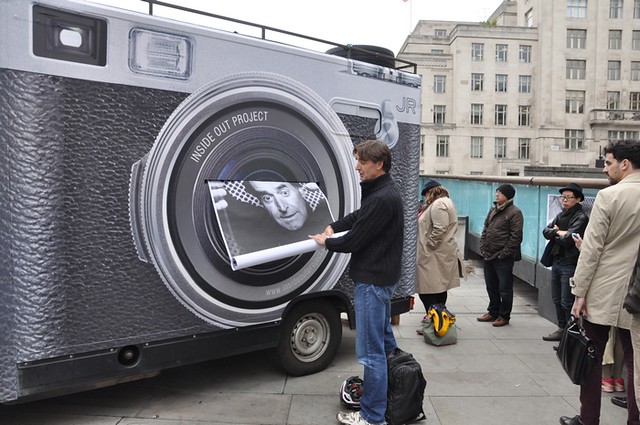 The Inside Out photo booth at Somerset House, 2013


That segues us nicely into an appreciation of how JR’s story is really like a street art fairytale. The promise of street art is that anyone can present their art to a public audience, you don’t need an art degree, critical approval or gallery acceptance, you create your own art world by placing your art on the streets. Direct from you the artist to the consumer, no middleman necessary. JR has basically parlayed this circumventing the art system system from untutored photography to hijacking wall space and from there to projects in Israel and Palestine meeting with military disapproval, to exhibitions in posh London galleries and films with the luminati of the film world. No formal art education or art world blessing required. Know someone else who did that? 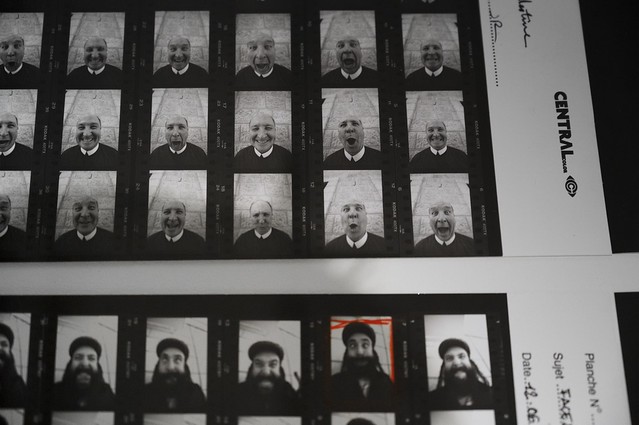 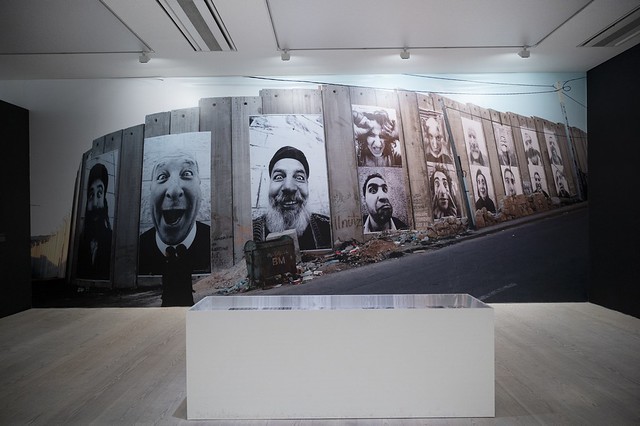 
One more thing in a show where so much effort has gone into making the artist look effortlessly cool, the QR codes are functioning pieces of art. No doubt if I ask a young person I will find yet again I am ages...months behind the times. 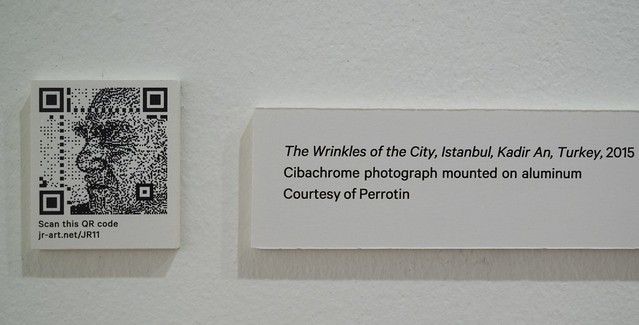 
The show dissects it’s subject into 7 themed zones, in each an idea and to a greater or lesser extent the process is revealed. The whole show is the manifestation of the third dimension of JR’s activity, the documentation, it really earns that title “Chronicles”.

Email ThisBlogThis!Share to TwitterShare to FacebookShare to Pinterest
Labels: JR