Among many other cities, towns and urban space perimeters around the world, London has been graced by PMP output already this year. The most visible appeared around the time that the late lamented Leonard Street Gallery was showing Bast and Judith Supine. 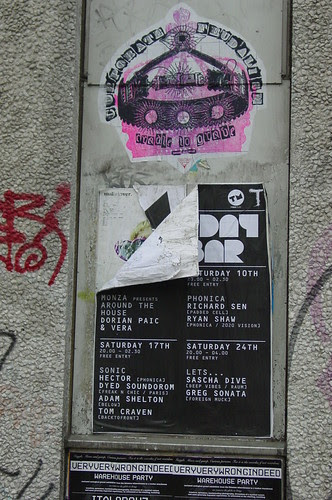 In the context of the current ultra-buff underway in East London, many street paste-up artists could take a leaf out of the PMP street survival guide and get up high. More than one of their pieces have survived for the best part of a year right at the epicentre of the council graffiti fatwah. 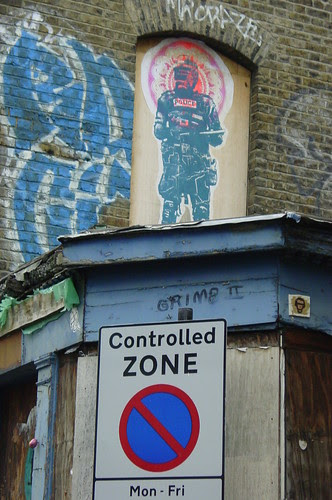 PMP’s street work in London has embraced a kooky spectrum from situationist Guy Debord (French situationist and poet) to the slightly baffling cufflinked wrists with origami pieces of paper cranes, not to mention a stencilled skull which still survive despite being comfortably within reach of the short arsed council buffers. In fact, at the start of the year it seemed you coudn’tturn a corner without having your brains poked by a PMP paste-up. 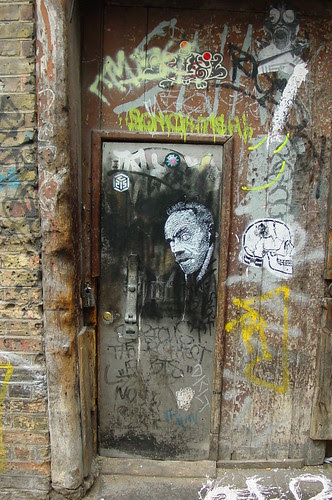 PMP Skull – and others
First thing to know about Peripheral Media Projects is that the name means something which is NOT mainstream media. Nothing about these guys really speaks of conventionality or conformity. And projects? They have a track record in activism, organising illegal parties and un-authorised mass assemblies in NY. Third, these guys have a big thing on the New York street art scene which is Ad Hoc gallery. How big? They have had shows this year by two fave rave artists Elbow-Toe and Armsrock.

The show occupies the upper front room of the Pure Evil gallery. Most striking and obvious are the large hanging wraps which are mega collages of PMP output. 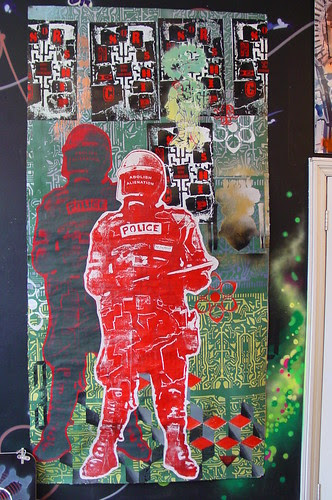 
The detail within the collages is almost entirely the result of the political pre-occupations of PMP and it’s worth recapping their origins and motivations. PMP are two guys (at least – at this show) who have campaigned on a variety of right-on street manifestos since about 2000. The origin was not so much a protest as a raising of awareness, executed through a simple text based recitation of facts which you ought to be aware of. This then developed into a more artistic image based campaign. The agenda wasn’t really anarchistic revolution, just heightening concern. Now, their unique and incredibly detailed graphic artwork targets global issues including inequality, globalisation, media consolidation, authoritarianism and environmentalism. 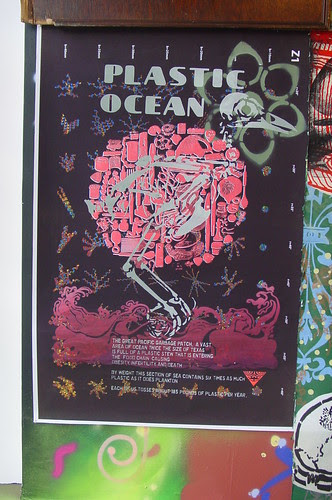 PMP - Plastic Ocean
Their commitment to environmentalism shows in the willingness of PMP to scour the streets for reclaimable materials for backgrounding (new verb!! It’s what happens if you talk to Americans for more than 10 minutes) their work. Even the majority of the frames are recycled from a skip outside a Leonard Street architects' practise, as well as quite a chunk of that white plastic cardboard stuff.

Most recently their message has moved on to the next stage of sowing the seeds, the idea that with enough conviction, ideas can be spread and power might be generated through numbers. 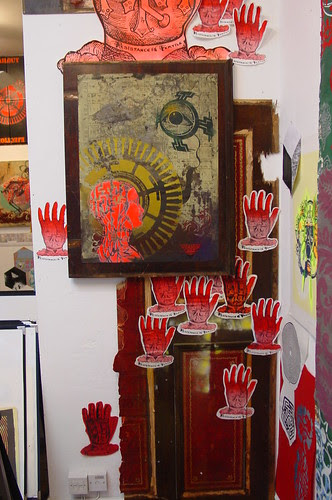 
PMP have been particularly energised by the post 9/11 infringement of civil liberties as the authority took advantage of heightened paranoia to justify radical interventionist policing policies, notably the crack down on un-authorised popular gatherings for fun. Any slightly left field gatherings such as the highly subversive Critical Mass (flash mob pedal powered bicycle knitters) particularly coming in for draconian targeting and control.

One particular motif repeating in the work is the Panopticon, in its purest form this refers to the hub and spoke – bicycles again – prison architecture which allows the fewest people to supervise the maximum number of crims. Although this echoes at many scales in different pieces it is probably most graphic is this reclaimed studded panel. 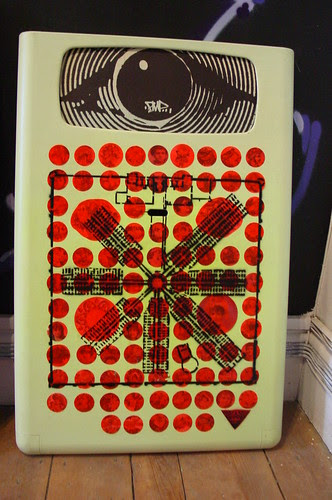 This Panopticon even features in what could easily be mistaken for snowflake backgrounds. 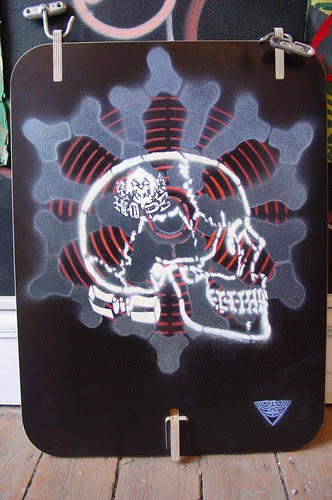 
The All Seeing Eye crops up repeatedly in PMPs collages, usually in the guise of a sinister big brotherish tool for spying and control. The eye as a symbol of evil invasive tracking is superimposed on a thumbprint, embracing the very essence of individuality, everyone being unique, yet simultaneously the thumbprint is the most common way of tracking and identifying specific human beings. The eye, all seeing and watching over you is also a component of the grand seal of the United States. Hah! – think about that then conspiracy theorists. 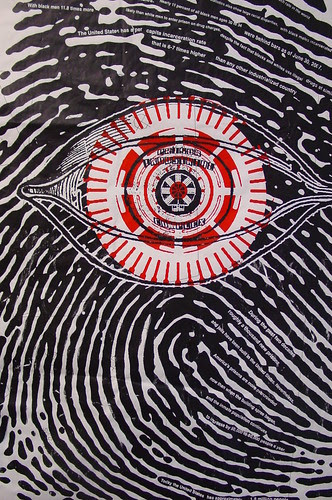 PMP fuel dissatisfaction with the status quo through repetition and illustration of facts which frankly should alarm all individuals with a view towards preserving individual liberties in the face of mass indoctrination and prescriptive manipulation. 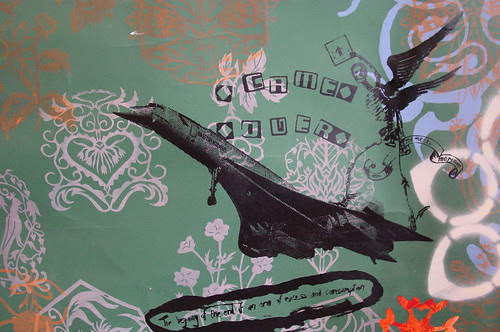 PMP – The Beginning Of An End Of An Era Of Consumption


Moire patterns, or as they are more commonly regarded – interference patterns (think regional soccer pundits in loud suits) are used as the basic construct in many of the big brother eye images. 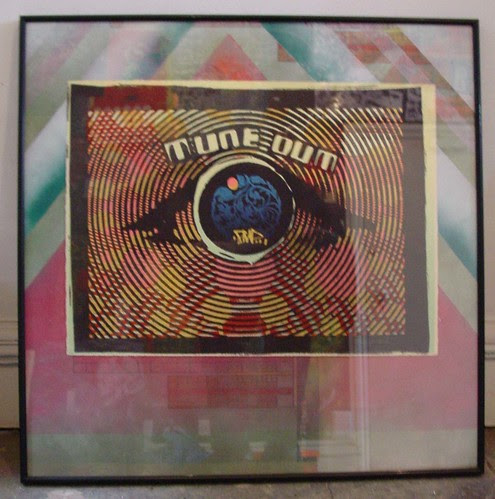 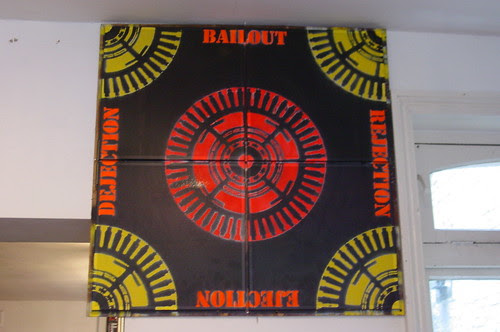 And the second new piece is the distinctively feminine skull counterpoint to what had always seemed to be a quite non-specific gender-free skull. 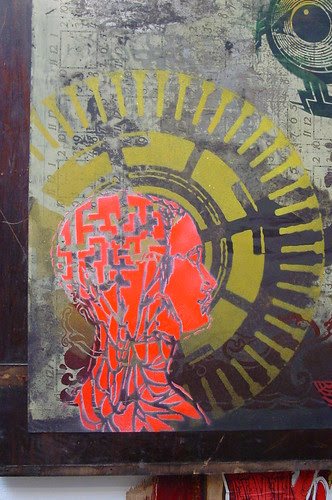 The temptation to recycle and repeat last done imagery is probably quite tempting for many artists passing through London but in addition to gloriously re-decorating our streets PMP have overlayed their stencilled skull on an iconic London view over one of our most long standing and classic cultural panoramas – Canary Wharf and Isle of Dogs. 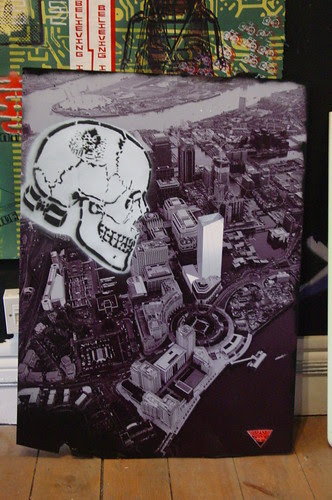 
One aspect of the presentation which left a sense of under achievement was that images as busy as the PMP wall collages really didn’t need a fight with the abstract swirls on black remaining from the previous show – those walls could really have done with a black wash prior to hanging. 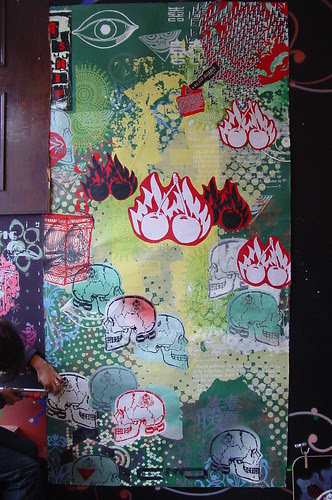 PMP on top – Psychedelic Brazilians behind

With PMPs work you shouldn’t really expect an epic grandeur best observed from the other side of the street, you put your chin on the bottom of the frame and lets your eyes hoover from side to side. Close scrutiny reveals the intricate details and reveals the plethora of ideas and ideologies.


Quite a few more photos of the show here
Posted by NoLionsInEngland at Friday, October 03, 2008

it's weak nasty gcse shit. seriously it clutters up the east end no end! and certainly isn't worthy of a show for gawds sake! oh dear.