Last weekend marked London’s main 2022 Pride celebration and a lot of new street art appeared in Shoreditch in celebration of and support for the LGBTQ community.

On the Shoreditch Street Art Tour on Sunday I was asked by one guest why the London Pride was in July rather than June as they were used to. Post tour digging revealed that “Pride in London”, the official title at present, is timed for the closest Saturday to the anniversary of the Stonewall riots in NYC which followed police raids on the Stonewall gay bar on 28th June. 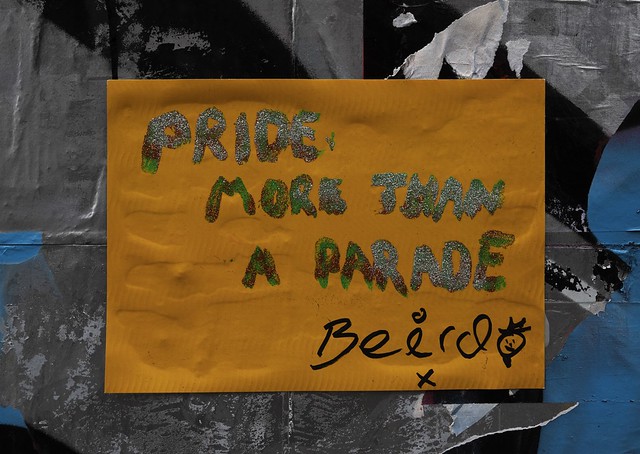 
The pride rainbow flag features in a lot of the Pride art pieces in its 6 colour traditional colour form, as opposed to the usual 7 colour representation of a rainbow. The first rainbow flag was designed by the artist Gilbert Blake in 1978 at the request of Harvey Milk (see the film Milk, excellent). It had 8 colours, the traditional 7 colours of the rainbow plus hot pink above the red. Each of the 8 colours was assigned a specific meaning. In 1979, aiming to increase flag production, the pink strip was dropped as hot pink material was not readily available. The turquoise stripe was also dropped so that the flag could be split and displayed in symmetrical paired halves each having three stripes. Thus the common Pride 6 colour rainbow evolved. 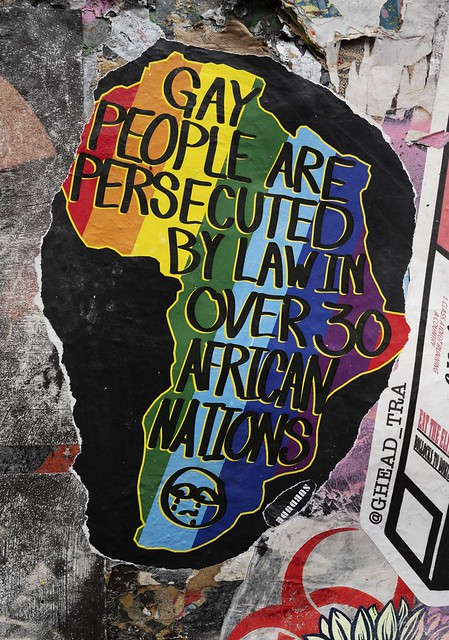 
Street artist Beirdo prefers 6 colours, or perhaps was just out of hot pink and turquoise A4 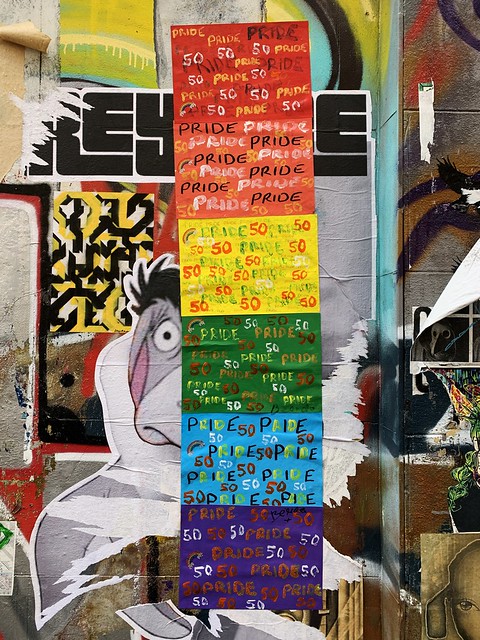 
Apparan sends her greetings and wishes you Happy Pride, with 7 rainbow stripes. 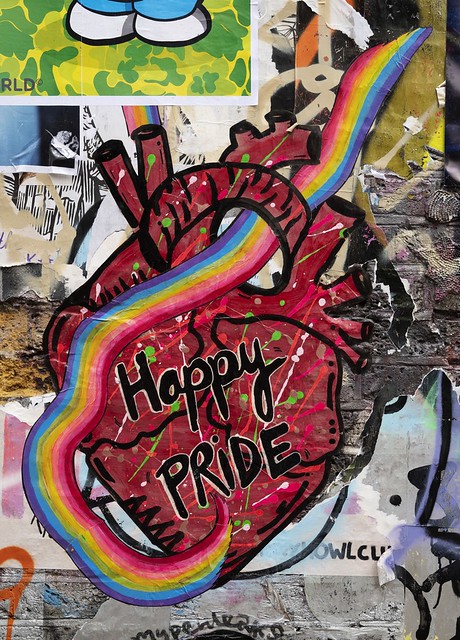 
Drash La Krass has a list. No homophobia, no biphobia, no transphobia, no sexism! 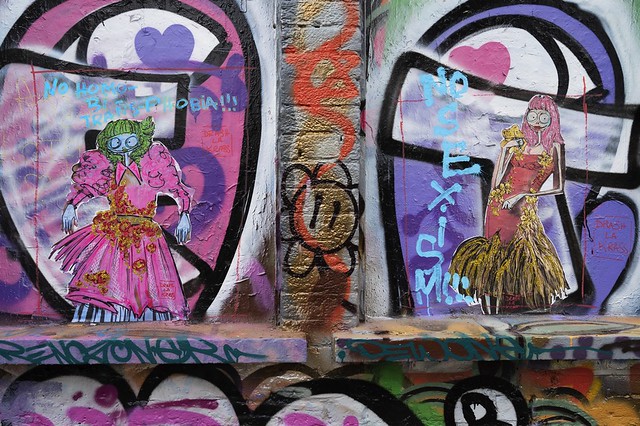 
Ghead_Tra is a new name this year to the Shoreditch street art scene and his art hates hatred and Conservatives. The God Loves Gays tricolour specifically aims at the vile spewing Westboro Baptist Church in Topeka, Kansas USA. 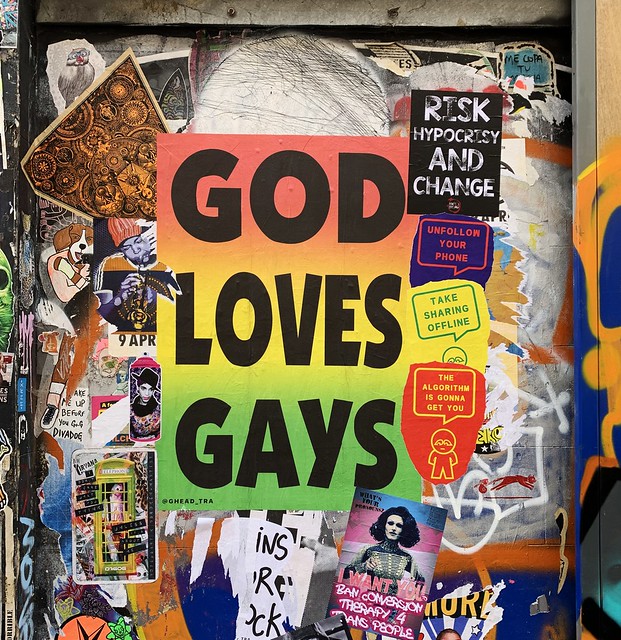 
If this next text based piece isn’t Ghead then Ghead ought to get together with the Unknown Artist as the message seamlessly blends that two big issues Ghead. 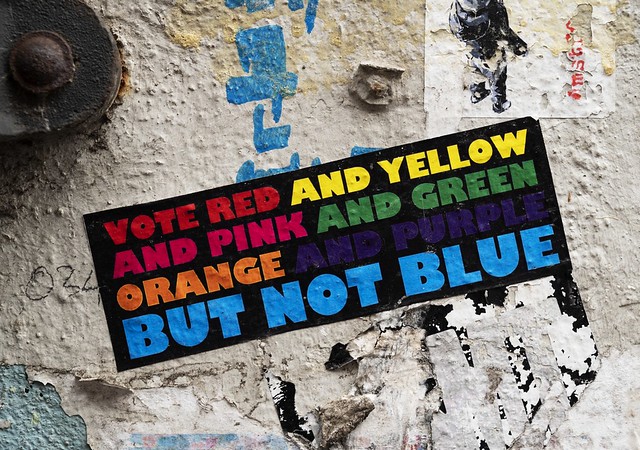 
Sidenote: on another matter the same so-called place of worship also holds extreme views on abortion and Ghead_tra parodies another specimen of Westboro extremism in opposition to that message. 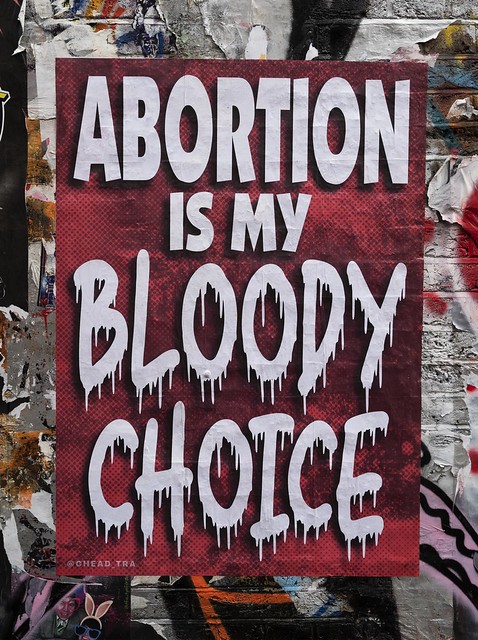 
Ahead of this week’s Tory party implosion Social Sniper homed in on an issue which highlighted the breakdown of trust by members of the LGBTQ community in politicians. This may need to be read slowly. Conversion therapy is a process aimed at “curing” or changing expressions of gender behaviour, identity or expression. To describe it as controversial would be to miss the most unacceptable aspects of the practice by a million miles. Boris Johnson decided not to proceed with legislation to ban the practice which provoked howls of horror, at which point he flipped and decided there would be a ban except it wouldn’t apply to trans conversion therapy. 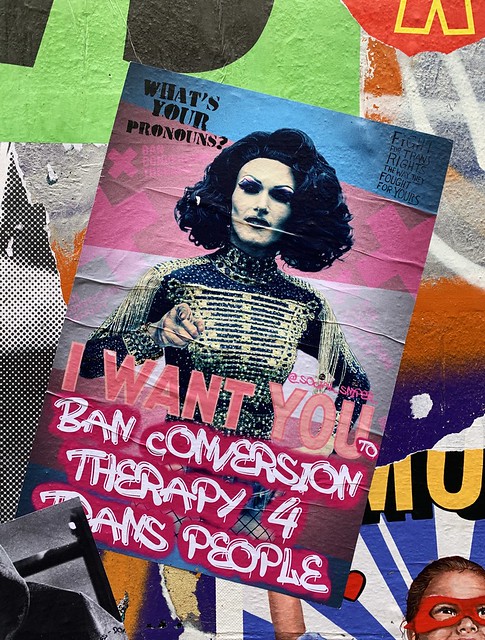 
For the curious, the background to Social Sniper’s art is another form of colour spectrum specifically representing the trans community and their supporters. Trans Pride is taking place this weekend, the weekend after Pride weekend.

Wandering down a parallel track again, one senior tory we didn’t know about before appeared on TV regretting that he had had to support the flip flops on conversion therapy policy. When politicians publicly admit to supporting policies they fundamentally disagree with, how can voters expect to elect a representative possessing even the tiniest fragment of integrity. 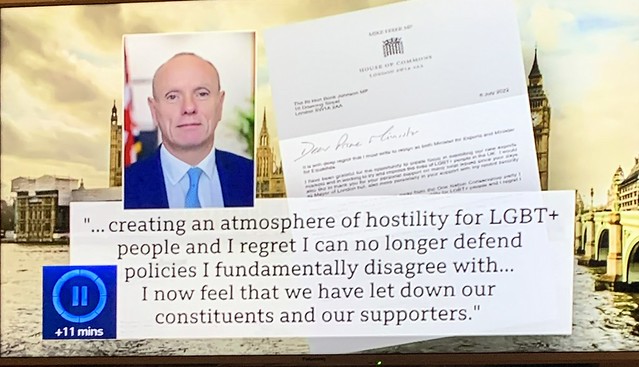 
I am hugely indebted to my Shoreditch Street Art Tours co-guide Subdude for his insights and information regarding the content and installation of the art discussed.


All photos: Dave Stuart except where stated
Posted by NoLionsInEngland at Sunday, July 10, 2022