Remember how news of the Cans Festival broke to us common plebs last May? Some posters, a list of artists too incredible to believe? In just 5 days time? Well, now we have a new mystery:

What could it be? Some have talked of something fresh, some have talked of The Grand Buff (actually I just made that up), as there is nothing concrete to go on and it case it is all about to disappear I thought I'd make one more trip to Leake Street this evening, just a month or so since my last visit.
Unlike some other graffiti festival sites I have been to where either the graff was taken away or the site remained sterile and un-touched since the event, Leake Street has generated a steady trickle of fresh stencil updates as well as territorial assault from graff crews. And based on some horror stories I have heard, some of those youngsters are quite viperous thugs.

A recent visitor has been Sickboy, adding a temple into Boris Johnson's gob and a collab with Spanish artist Zosen. 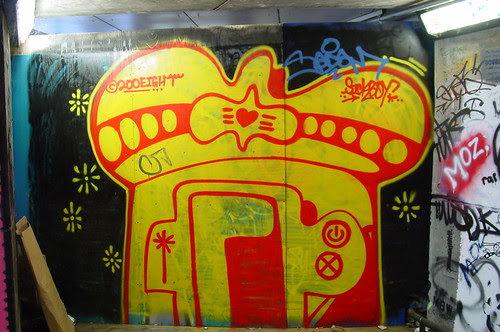 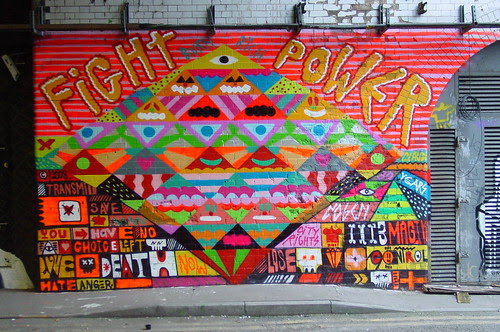 Sickboy and Zosen Fight The Power
It is good to see writers getting handy with the cans, personally I don't feel like its heresy for them to go over old stencil, its a force of nature. 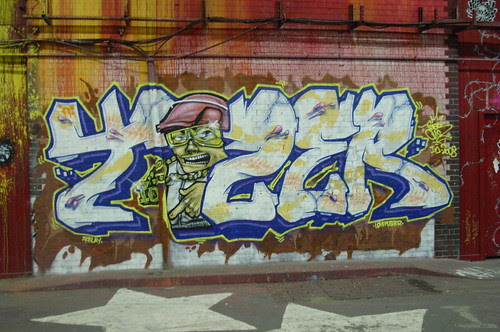 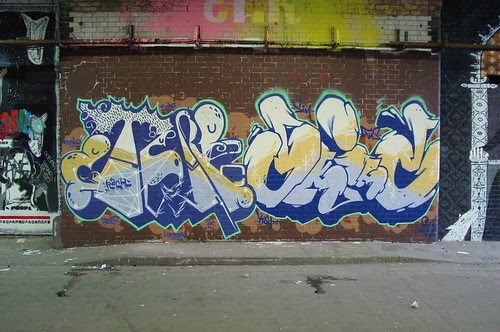 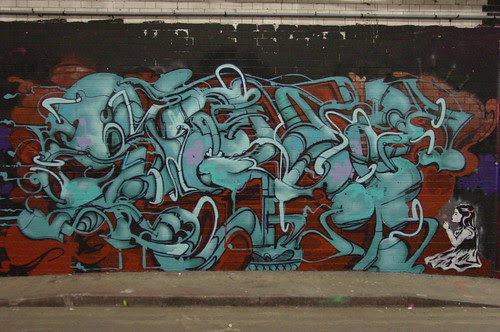 That one above is HOT 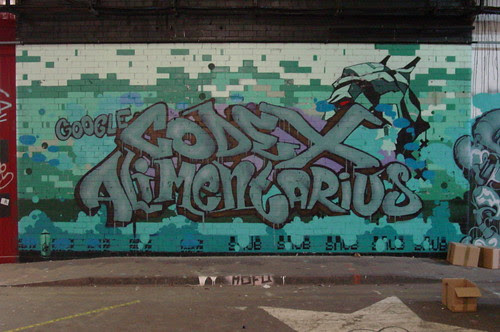 "Google Codex Alimentarius". And to save you the trouble, this is what the website says: "The Codex Alimentarius Commission was created in 1963 by FAO and WHO to develop food standards, guidelines and related texts such as codes of practice under the Joint FAO/WHO Food Standards Programme." Sounds as exciting as the EU's efforts to standardize the shape of bananas.

Ckeck the fate of Bansky's Caveman buff. Tags appear all over the cave drawings and the "buffed" area in Banksy's composition but none has covered the sprayer or Banksy's tag. It like no matter how hardcore or aggressive the writers want to appear, they're really convention abiding pussycats who can't actually write over an image of a human and have too much respect for the cool might of the Banksy brandname. 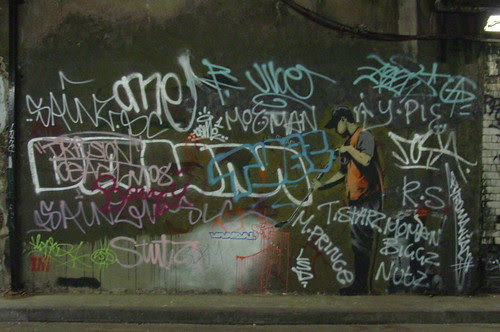 Tristan Manco has written in a recent art mag that some 651 un-invited artists signed up to have a go at stenciling over the first Cans weekend. Well many many more have turned up to add their un-regulated shit Among the loads of fresh stencils, one that caught my eye for good cutting, nice image and great colours was this, tagged "Onelegout". 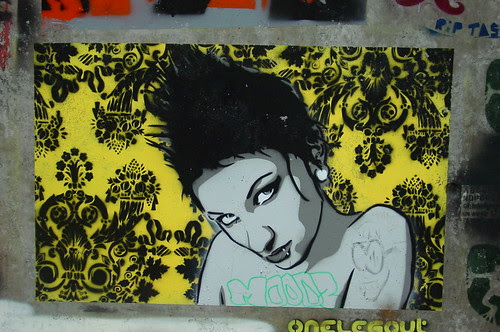 Onelegout
So, is there a fresh wall of frame going up, is it the grand buff, is the site returning to Eurostar or is it just a minor clean up to make it look like it did that May bank holiday weekend? Lets see what Saturday morning brings.


Quite a lot more pics from this visit here, pics from the "official invited" artists at the opening here and for earlier relevant blog blurts see Cans Festival, Let Us Spray and diary of a toy at Cans aka "Banksy, NoLions, Eelus Group Show (or, Banksy - You Created A Monster)"

Cans Festival - the first preview night visit
Cans Festival - Let Us Spray - what went on in Banksy's pet project, the public access spray zone
Banksy, No Lions, Eelus Group Show - Banksy wanted anyone apart from artists to take up stencilling, we accepted the challenge
Cans Festival - One More Sniff - How the Cans wall art evolved in the first month or so after the event
Cans Recycled - First Peek - An un-scheduled sneak peek at the second version of Cans Festival when the tunnel was closed for a few days.
Cans Recycled Opens - Like it says on the tin
Alphabet Soup - The Cans 2 Letter Hunt - A Rarekind of letter game played at Cans Recycled
Cans2 Recycled Revisited - more.
Posted by NoLionsInEngland at Wednesday, August 20, 2008

"That one above is HOT" is Solo One VOP

Selph - many thanks for that, shame that Solo One job was painted over but he left some other blistering stuff in the tunnel. Skire takes it to the limit! That piece went but he also put another one up in another part of the tunnel. Drop dead cool stuff.

Thanks for featuring a pic of my piece! (the onelegout piece) - If anyone is interested in learning how to stencil, they can check out my tutorial at www.onelegout.com/stencil_tutorial.html

Codex Alimentarius (it's heartening to see that someone would like to draw people's attention to it) means 'Food Code'. It was developed by Nazi criminals after WWII, and then brought public by the UN (under the auspices of the WHO and the FAO) in 1967. It is responsible for the ban on vitamins (nutrients) in the UK, the expanded use of chemical pesticides and herbicides and genetic modification in the food supply. It's also responsible for the ban (in many countries in Africa, in India, in Iraq) for the banning of heirloom seeds. Farmers are required to purchase terminator seeds from Monsanto. This gives extreme power to big pharma, and big agri-biz... everyone should know about it. Check out Ian Crane's vidoe about it on google.video. This is coming to the US.