One of the unique charms of London’s art galleries is their enlightened welcome of members of the public who can add their own enhancements to the displayed works and correct the principal artist’s shortcomings. Actually no but in the case of the Leake Street tunnel there ain’t no stopping anyone with a spray can getting their piece up.

A swift return to the Cans Recycled site just 8 days after it opened revealed a number of large scale additions, a bit of going over and a lot of additions to the all-comers exit ramp area.

Sweetest new piece is undoubtedly this one by Petro

The roadworks have been completed since last weekend and the removal of the fenced off holes permits better shots of pieces in that area. It is much easier to see how the head of Conor Harrington’s horse connects to the fire-breathing mouth of AlexOne’s dragon. 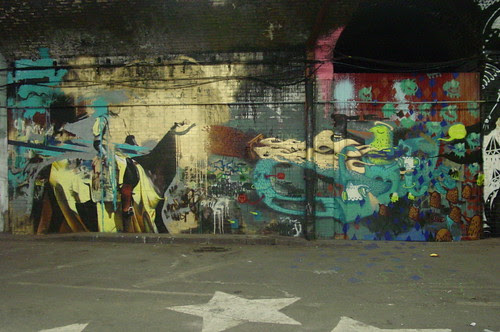 Xenx’s flora and fauna fantasy land can be captured in all its glory – ultrawide and leaking across the floor. 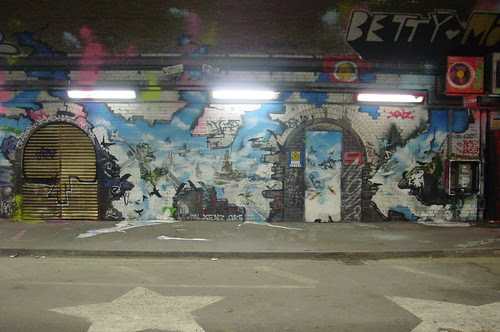 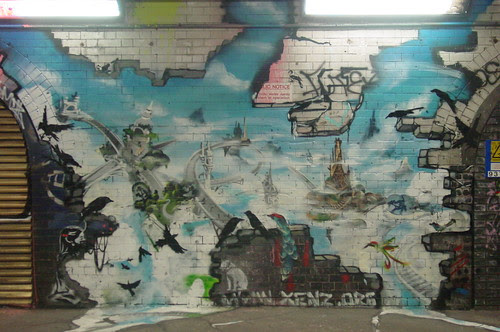 Mode2 has also been in town. 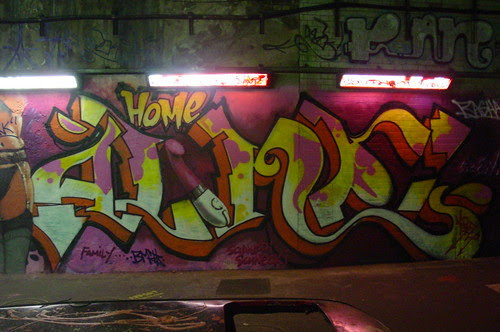 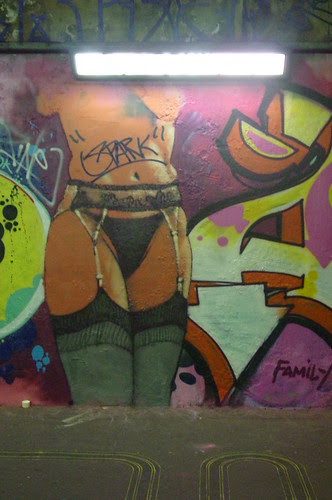 Prize for the most confrontational going over goes to London’s Oker who have sprayed over the crisp piece left by Bristol’s What Crew (Richt, 45RPM). 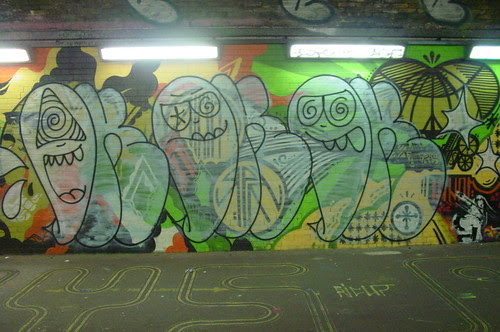 Will Barras’s car piece was done on cardboard in-fill to the windows, and those bits of cardboard had been signed on the back. That was recklessly mentioned on one website and un-surprisingly it is now a very windy windowless ride. All the other vehicles are beginning to look like some has taken a sledge hammer and angle grinder on their daytrip to Waterloo.

Cans Festival - the first preview night visit
Cans Festival - Let Us Spray - what went on in Banksy's pet project, the public access spray zone
Banksy, No Lions, Eelus Group Show - Banksy wanted anyone apart from artists to take up stencilling, we accepted the challenge
Cans Festival - One More Sniff - How the Cans wall art evolved in the first month or so after the event
Cans Recycled - First Peek - An un-scheduled sneak peek at the second version of Cans Festival when the tunnel was closed for a few days.
Cans Recycled Opens - Like it says on the tin
Alphabet Soup - The Cans 2 Letter Hunt - A Rarekind of letter game played at Cans Recycled
Cans2 Recycled Revisited - more.
Posted by NoLionsInEngland at Monday, September 01, 2008